Download this LitChart! (PDF)
Teachers and parents! Struggling with distance learning? Our Teacher Edition on Breath, Eyes, Memory can help.

Welcome to the LitCharts study guide on Edwidge Danticat's Breath, Eyes, Memory. Created by the original team behind SparkNotes, LitCharts are the world's best literature guides.

A concise biography of Edwidge Danticat plus historical and literary context for Breath, Eyes, Memory.

A quick-reference summary: Breath, Eyes, Memory on a single page.

In-depth summary and analysis of every chapter of Breath, Eyes, Memory. Visual theme-tracking, too.

Explanations of Breath, Eyes, Memory's symbols, and tracking of where they appear.

Born in Port-au-Prince, Haiti, Edwidge Danticat was raised for several years by her aunt and uncle while her parents, André and Rose, immigrated to New York to begin laying the foundation for a new life for their family. At 12, Danticat moved to Brooklyn (much like Sophie in Breath Eyes Memory), where she coped with the teasing and bullying she faced at school by writing the story of her journey to New York—and her childhood in Haiti—for publications that featured writing by teens. Danticat graduated from Clara Barton High School in Crown Heights, then attended Barnard College where she studied French Literature. She attended the prestigious and experimental Master of Fine Arts program in Creative Writing at Brown University. Upon graduating in 1993, she reworked her master’s thesis into her first novel, Breath, Eyes, Memory. Published to both acclaim and controversy, the book became an Oprah’s Book Club selection in 1998, catapulting Danticat to fame in the literary community. Danticat has taught creative writing at NYU and the University of Miami, published work in outlets such as The New Yorker and Harper’s, received nominations for the National Book Award and the National Book Critics Circle Award, and been awarded a MacArthur “Genius Grant.” The author of upwards of 15 works of fiction, memoir, and children’s literature, Danticat’s latest book, published in 2019, is called Everything Inside.
Get the entire Breath, Eyes, Memory LitChart as a printable PDF.
"My students can't get enough of your charts and their results have gone through the roof." -Graham S.
Download 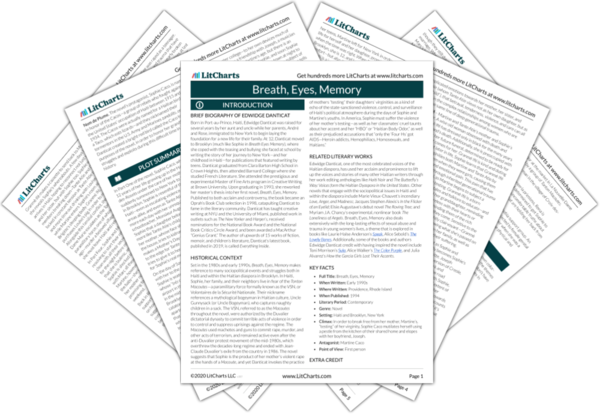 Set in the 1980s and early 1990s, Breath, Eyes, Memory makes reference to many sociopolitical events and struggles both in Haiti and within the Haitian diaspora in Brooklyn. In Haiti, Sophie, her family, and their neighbors live in fear of the Tonton Macoutes—a paramilitary force formally known as the VSN, or Volontaires de la Sécurité Nationale. Their nickname references a mythological bogeyman in Haitian culture, Uncle Gunnysack (or Uncle Bogeyman), who captures naughty children in a sack. The VSN, referred to as the Macoutes throughout the novel, were authorized by the Duvalier dictatorial dynasty to commit terrible acts of violence in order to control and suppress uprisings against the regime. The Macoutes used machetes and guns to commit rape, murder, and other acts of terrorism, and remained active even after the anti-Duvalier protest movement of the mid-1980s, which overthrew the decades-long regime and ended with Jean-Claude Duvalier’s exile from the country in 1986. The novel suggests that Sophie is the product of her mother’s violent rape at the hands of a Macoute, and yet Danticat invokes the practice of mothers “testing” their daughters’ virginities as a kind of echo of the state-sanctioned violence, control, and surveillance of Haiti’s political atmosphere during the days of Sophie and Martine’s youths. In America, Sophie must suffer the violence of her mother’s testing—as well as her classmates’ cruel taunts about her accent and her “HBO” or “Haitian Body Odor,” as well as their prejudiced accusations that “only the ‘Four Hs’ got AIDS—Heroin addicts, Hemophiliacs, Homosexuals, and Haitians.”

Edwidge Danticat, one of the most celebrated voices of the Haitian diaspora, has used her acclaim and prominence to lift up the voices and stories of many other Haitian writers through her work editing anthologies like Haiti Noir and The Butterfly’s Way: Voices form the Haitian Dyaspora in the United States. Other novels that engage with the sociopolitical issues in Haiti and within the diaspora include Marie Vieux-Chauvet’s incendiary Love, Anger, and Madness; Jacques Stephen Alexis’s In the Flicker of an Eyelid; Elsie Augustave’s debut novel The Roving Tree; and Myriam J.A. Chancy’s experimental, nonlinear book The Loneliness of Angels. Breath, Eyes, Memory also deals extensively with the long-lasting effects of sexual abuse and trauma in young women’s lives, a theme that is explored in books like Laurie Halse Anderson’s Speak, Alice Sebold’s The Lovely Bones. Additionally, some of the books and authors Edwidge Danticat credit with having inspired the novel include Toni Morrison’s Sula, Alice Walker’s The Color Purple, and Julia Alvarez’s How the Garcia Girls Lost Their Accents.
Key Facts about Breath, Eyes, Memory

Nom de Plume. The novel’s protagonist, Sophie Caco, is named in honor of the Cacos—a group of rebels who fought against the United States’ occupation of Haiti between 1915 and 1934. The Cacos were actually named for a Haitian bird called a Taco, which eats lizards—and they nicknamed their tormentors in the U.S. Army and Marines zandolits, or lizards. Danticat created a bright red bird called the Caco for the purposes of the novel, in order to honor her grandfather’s struggles and exploits during this difficult time in Haitian history. 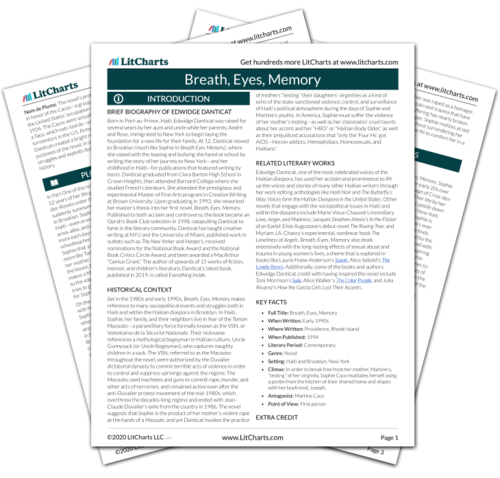 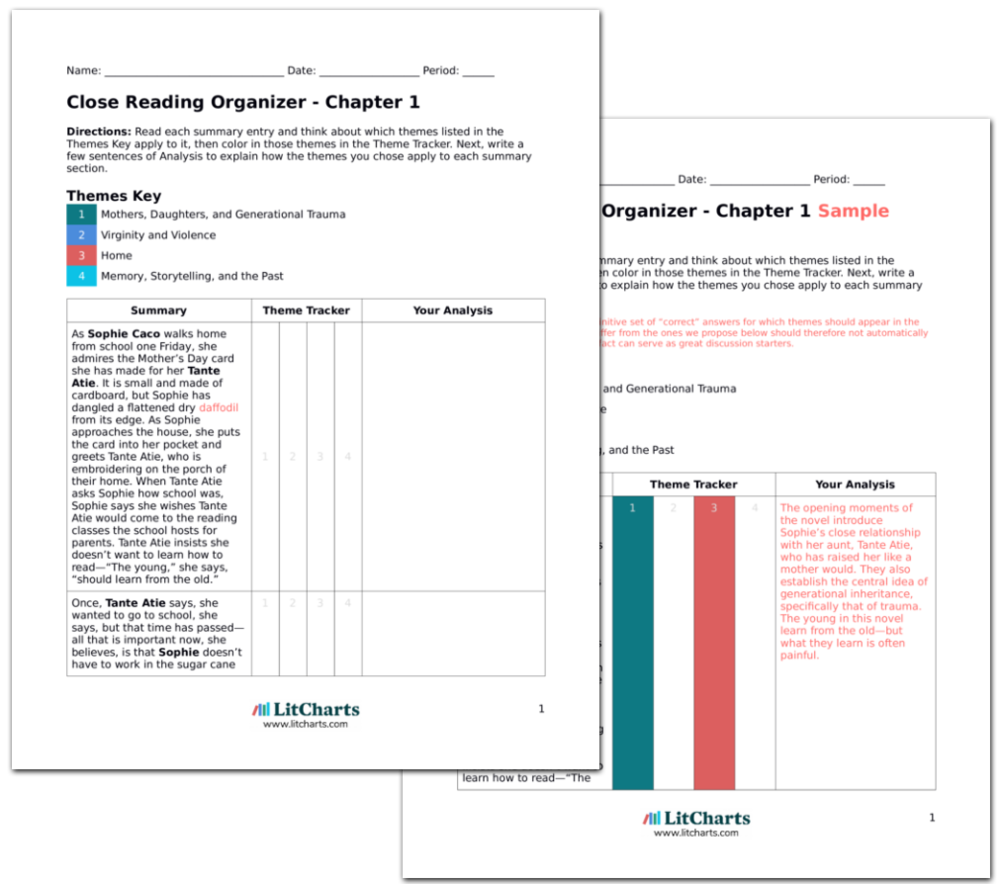