Download this LitChart! (PDF)
Teachers and parents! Struggling with distance learning? Our Teacher Edition on Brideshead Revisited can help.

Welcome to the LitCharts study guide on Evelyn Waugh's Brideshead Revisited. Created by the original team behind SparkNotes, LitCharts are the world's best literature guides.

A concise biography of Evelyn Waugh plus historical and literary context for Brideshead Revisited.

A quick-reference summary: Brideshead Revisited on a single page.

In-depth summary and analysis of every chapter of Brideshead Revisited. Visual theme-tracking, too.

Explanations of Brideshead Revisited's symbols, and tracking of where they appear.

An interactive data visualization of Brideshead Revisited's plot and themes.

Evelyn Waugh was born to wealthy parents in 1903 in London. Waugh’s family moved to the nearby countryside in 1907, and Waugh enjoyed his childhood in this idyllic setting. Waugh was a clever and inventive child, writing short stories and plays from a young age. He received a scholarship to attend Oxford University but studied little during his time there. Instead, he gained a notorious reputation for his drinking and his sardonic, unconventional approach to politics and culture. During this period, he had several homosexual relationships. Waugh did not complete his degree at Oxford, and instead enrolled in art school, which he also did not complete. His first book, based on the life of the painter Dante Gabriel Rossetti, was published in 1927. Shortly after this, his comedic satire, Decline and Fall, also went into print. At the end of this year, Waugh married Evelyn Gardner, but the couple separated two years later. Waugh began to gain a reputation as a writer and worked for several well-known magazines and newspapers. He became a war correspondent, covering events in Africa and South America and travelling extensively during this period. In 1930, Waugh converted to Catholicism and married Laura Herbert. The couple had seven children. Waugh served in World War II but was undisciplined and unsuited to military life. He injured himself in a parachuting accident in 1944 and, during his recovery period, wrote Brideshead Revisited. This novel was extremely successful and made Waugh famous. After Brideshead, Waugh wrote a series of novels about Catholicism, but they did not receive the same degree of success. Waugh suffered a nervous breakdown in 1953 and, although he recovered, his health was poor after this. He died of heart failure in 1966.
Get the entire Brideshead Revisited LitChart as a printable PDF.
"My students can't get enough of your charts and their results have gone through the roof." -Graham S.
Download 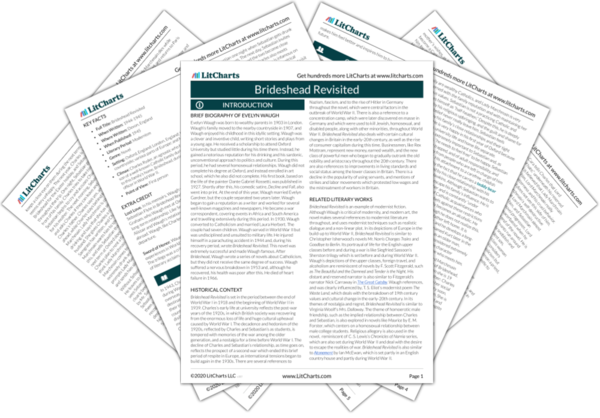 Brideshead Revisited is set in the period between the end of World War I in 1918 and the beginning of World War II in 1939. Charles’s early life at university reflects the post-war years of the 1920s, in which British society was recovering from the enormous loss of life and huge cultural upheaval caused by World War I. The decadence and hedonism of the 1920s, reflected by Charles and Sebastian’s as students, is tempered with memories of the war among the older generation, and a nostalgia for a time before World War I. The decline of Charles and Sebastian’s relationship, as time goes on, reflects the prospect of a second war which ended this brief period of respite in Europe, as international tensions began to build again in the 1930s. There are several references to Nazism, fascism, and to the rise of Hitler in Germany throughout the novel, which were central factors in the outbreak of World War II. There is also a reference to a concentration camp, which were later discovered en masse in Germany and which were used to kill Jewish, homosexual, and disabled people, along with other minorities, throughout World War II. Brideshead Revisited also deals with certain cultural changes in Britain in the early-20th century, as well as the rise of consumer capitalism during this time. Businessmen, like Rex Mottram, represent new money, earned wealth, and the new class of powerful men who began to gradually outrank the old nobility and aristocracy throughout the 20th century. There are also references to improvements in living standards and social status among the lower classes in Britain. There is a decline in the popularity of using servants, and mentions of strikes and labor movements which protested low wages and the mistreatment of workers in Britain.

Other Books Related to Brideshead Revisited

Brideshead Revisited is an example of modernist fiction. Although Waugh is critical of modernity, and modern art, the novel makes several references to modernist literature throughout, and uses modernist techniques such as realistic dialogue and a non-linear plot. In its depictions of Europe in the build-up to World War II, Brideshead Revisited is similar to Christopher Isherwood’s novels Mr. Norris Changes Trains and Goodbye to Berlin. Its portrayal of life for the English upper classes before and during a war is like Siegfried Sassoon’s Sherston trilogy which is set before and during World War II. Waugh’s depictions of the upper classes, foreign travel, and alcoholism are reminiscent of novels by F. Scott Fitzgerald, such as The Beautiful and the Damned and Tender is the Night. His distant and reserved narrator is also similar to Fitzgerald’s narrator Nick Carraway in The Great Gatsby. Waugh references, and was clearly influenced by, T. S. Eliot’s modernist poem The Waste Land, which deals with the breakdown of 19th century values and cultural change in the early-20th century. In its themes of nostalgia and regret, Brideshead Revisited is similar to Virginia Woolf’s Mrs. Dalloway. The theme of homoerotic male friendship, such as the implied relationship between Charles and Sebastian, is also explored in novels like Maurice by E. M. Forster, which centers on a homosexual relationship between male college students. Religious allegory is also used in the novel,  reminiscent of C. S. Lewis’s Chronicles of Narnia series, which are also set during World War II and deal with the desire to escape the realities of war. Brideshead Revisited is also similar to Atonement by Ian McEwan, which is set partly in an English country house and partly during World War II.
Key Facts about Brideshead Revisited

Lost Love. In his memoirs, Waugh wrote that the character of Sebastian Flyte in Brideshead Revisited is based on Alistair Graham, who Waugh met at Oxford and with whom he had a long-term relationship. Like Sebastian and Charles in the novel, Alistair and Waugh’s relationship ended when Alistair went abroad. Waugh, like Charles, left Oxford soon after Alistair’s departure.

Sword of Honor. Waugh wrote in more detail about his experiences in World War II in his novel trilogy, Sword of Honor. The trilogy was a critical success and won Waugh a great deal of literary acclaim. 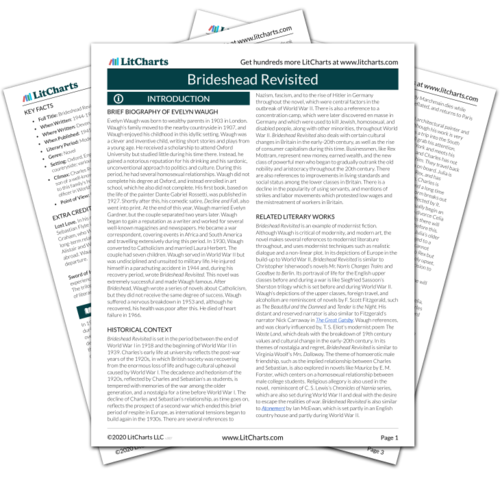 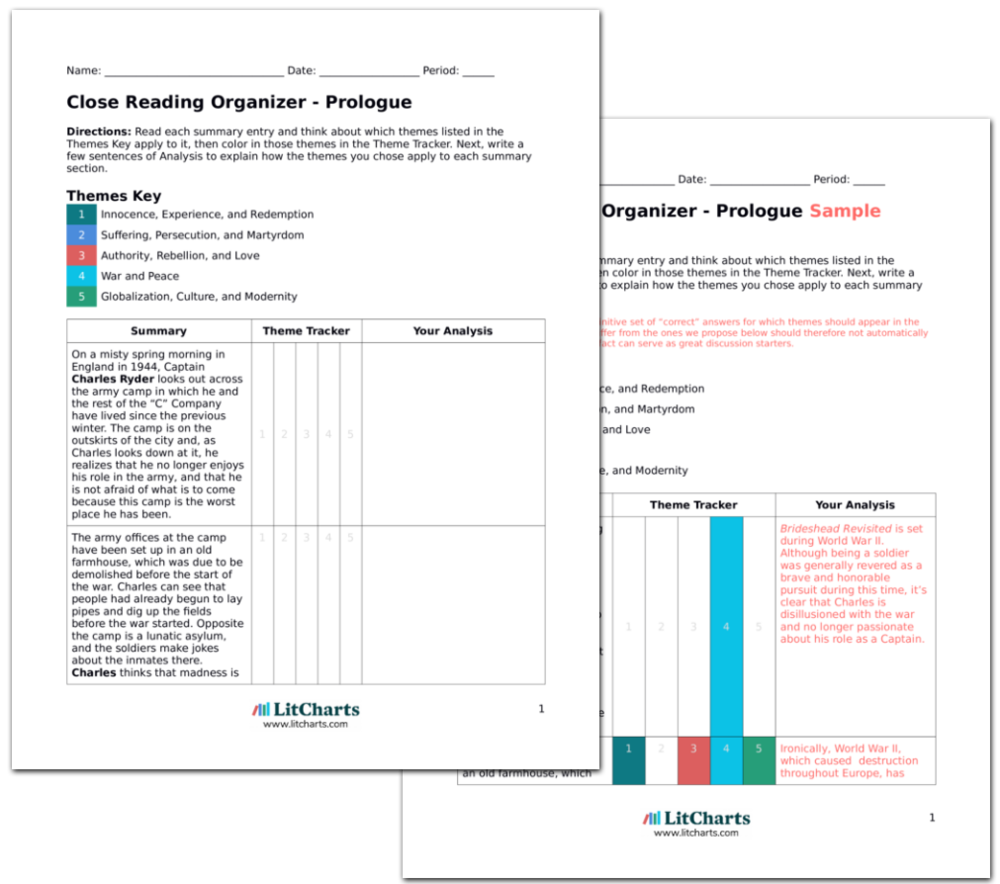