Tire irons come to represent a physical and pervasive manifestation of homophobia throughout the story. Tire irons are used to beat Earl to death, and Ennis presumes that Jack died by being beaten with tire irons, too. At the end of the story, Proulx describes Ennis’s dreams of Jack when he was young, eating beans out of a can with a spoon. She writes, “The spoon handle was the kind that could be used as a tire iron.” Even when Ennis dreams of Jack when they were both young, in love, and carefree, the threat of judgment, hatred, and death tinges the memory. Thus the tire iron symbolizes the pervasive threat of violence that hangs over Ennis and Jack’s whole relationship. At any moment, there could be a Joe Aguirre watching them, an Alma judging them, a nameless mob ready to beat them to death. Ennis’s realization that the spoon handle could be used as a tire iron represents how everyday objects can be weaponized in order to punish people seen as “unnatural.” Further, beating gay men with a traditionally masculine tool is another means of attempting to punish and coerce men who are seen as not fitting into the confines of societal ideals of masculinity.

The Brokeback Mountain quotes below all refer to the symbol of Tire Iron. For each quote, you can also see the other characters and themes related to it (each theme is indicated by its own dot and icon, like this one:

“Dad made sure I seen it. Took me to see it. Me and K.E. Dad laughed about it. Hell, for all I know he done the job. If he was alive and was to put his head in that door right now you bet he’d go get his tire iron. Two guys livin together? No. All I can see is we get together once in a while way the hell out in the back a nowhere—”

It was Lureen and she said who? who is this? and when he told her again she said in a level voice yes, Jack was pumping up a flat on the truck out on a back road when the tire blew up. The bead was damaged somehow and the force of the explosion slammed the rim into his face, broke his nose and jaw and knocked him unconscious on his back. By the time someone came along he had drowned in his own blood.

No, he thought, they got him with the tire iron.

The old man spoke angrily. “I can’t get no help out here. Jack used a say, ‘Ennis del Mar,’ he used a say, ‘I’m goin a bring him up here one a these days and we’ll lick this damn ranch into shape.’ He had some half-baked idea the two a you was goin a move up here, build a log cabin, and help me run this ranch and bring it up. Then this spring he’s got another one’s goin a come up here with him and build a place and help run the ranch, some ranch neighbor a his from down in Texas. He’s goin a split up with his wife and come back here. So he says. But like most a Jack’s ideas it never come to pass.”

Unlock with LitCharts A+
Get the entire Brokeback Mountain LitChart as a printable PDF.
"My students can't get enough of your charts and their results have gone through the roof." -Graham S.
Download 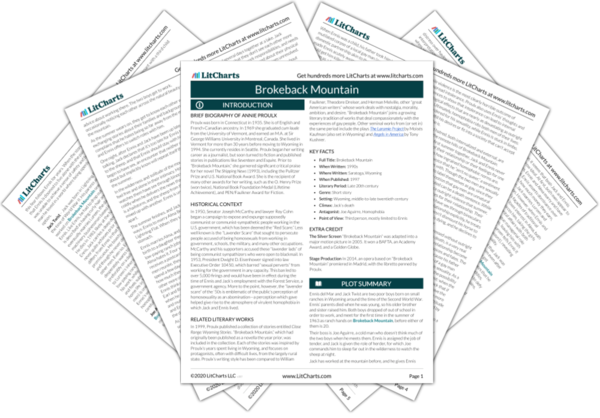 The timeline below shows where the symbol Tire Iron appears in Brokeback Mountain. The colored dots and icons indicate which themes are associated with that appearance.

...that it was presumed they were gay. One day, Earl was brutally murdered with a tire iron and mutilated, and Ennis’s father took his young son to see the body as a... (full context) 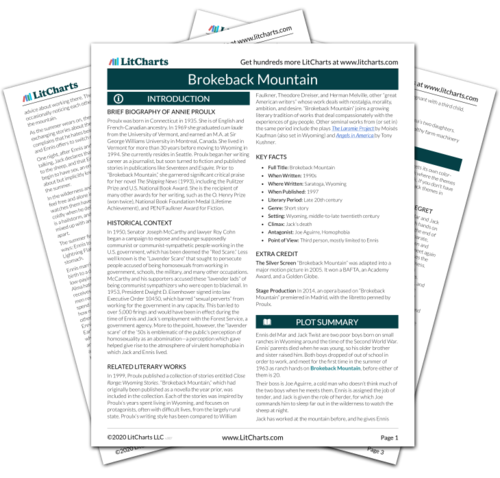 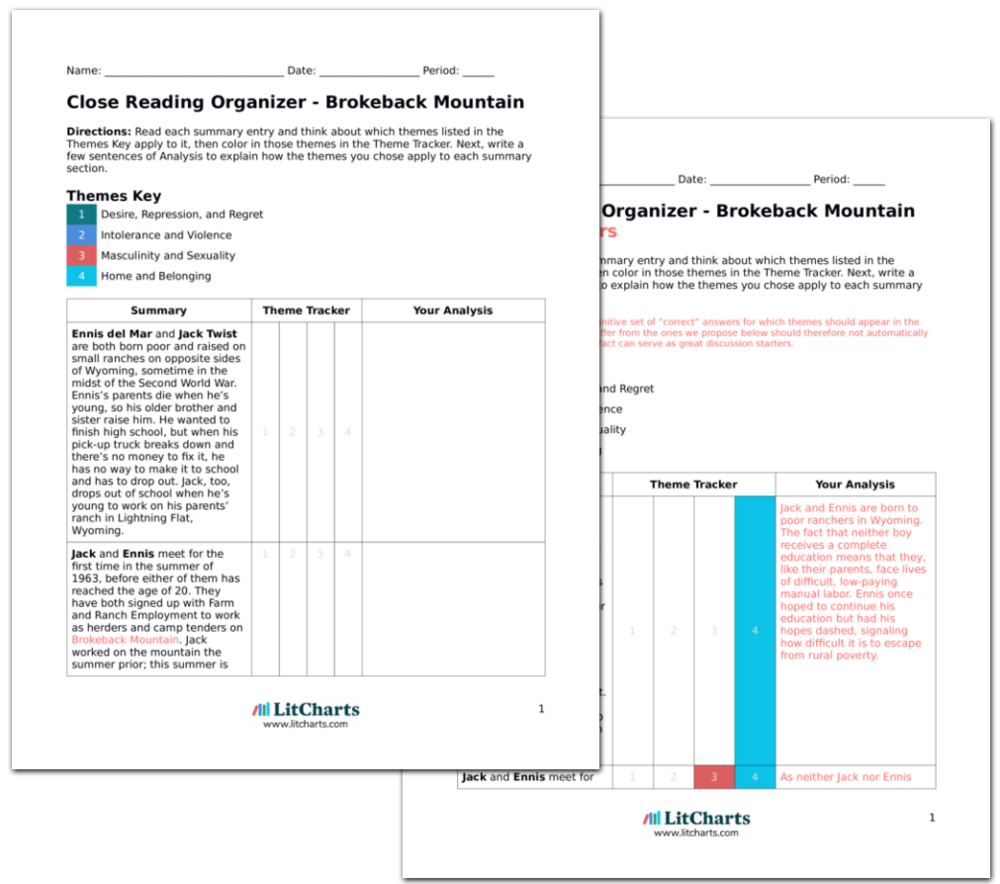