Download this LitChart! (PDF)
Teachers and parents! Struggling with distance learning? Our Teacher Edition on Bud, Not Buddy can help.

Welcome to the LitCharts study guide on Christopher Paul Curtis's Bud, Not Buddy. Created by the original team behind SparkNotes, LitCharts are the world's best literature guides.

A concise biography of Christopher Paul Curtis plus historical and literary context for Bud, Not Buddy.

A quick-reference summary: Bud, Not Buddy on a single page.

In-depth summary and analysis of every chapter of Bud, Not Buddy. Visual theme-tracking, too.

Explanations, analysis, and visualizations of Bud, Not Buddy's themes.

Description, analysis, and timelines for Bud, Not Buddy's characters.

Description, analysis, and timelines for Bud, Not Buddy's terms.

Explanations of Bud, Not Buddy's symbols, and tracking of where they appear.

An interactive data visualization of Bud, Not Buddy's plot and themes.

Christopher Paul Curtis was born on May 10, 1953, in Flint, Michigan, a place that would later become the setting of some of his most famous works. He was born to Dr. Elmer Curtis and Leslie Jane Curtis and is the second oldest of five siblings. While Curtis was growing up, his father practiced podiatry for some time before ultimately beginning a job at an assembly line for better pay. It wasn’t too long before Curtis followed his lead. After graduating from Flint Southwestern High School in 1972, Curtis enrolled at the University of Michigan’s Flint campus and applied for a job at Fisher Body Plant No. 1 General Motors assembly facility. This allowed Curtis to make decent pay, which went towards paying for his part-time degree (which he received in 2000). At the assembly line, Curtis set up his work schedule so that he and his colleague would each work 30 minutes before alternating. Curtis would then use his “free” time to read novels and combat his boredom by writing while on the job. After working a series of other low-paying jobs, Curtis took the year off from working in 1993 to focus on writing what would eventually become The Watsons Go To Birmingham—1963. For this debut novel, Curtis won a Newbury Honor Award in 1996. More books followed, as well as more honors and literary awards such as the Coretta Scott King Award for his next novel, Bud, Not Buddy. Curtis remains a prolific writer and continues to write historical fiction with young African American protagonists for a young adult audience. He currently resides in Ontario, Canada, with his children and wife.
Get the entire Bud, Not Buddy LitChart as a printable PDF.
"My students can't get enough of your charts and their results have gone through the roof." -Graham S.
Download 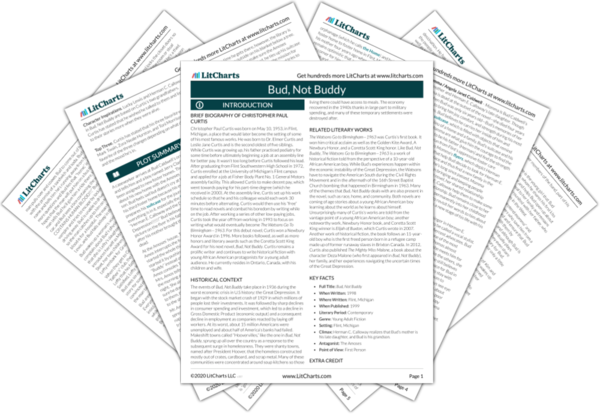 Historical Context of Bud, Not Buddy

The events of Bud, Not Buddy take place in 1936 during the worst economic crisis in U.S history: the Great Depression. It began with the stock market crash of 1929 in which millions of people lost their investments. It was followed by sharp declines in consumer spending and investment, which led to a decline in Gross Domestic Product (economic output) and a consequent decline in employment as companies reacted by laying off workers. At its worst, about 15 million Americans were unemployed and about half of America’s banks had failed. Makeshift towns called “Hoovervilles,” like the one in Bud, Not Buddy, sprung up all over the country as a response to the subsequent surge in homelessness. They were shanty towns, named after President Hoover, that the homeless constructed mostly out of crates, cardboard, and scrap metal. Many of these communities were concentrated around soup kitchens so those living there could have access to meals. The economy recovered in the 1940s thanks in large part to military spending, and many of these temporary settlements were destroyed after.

Other Books Related to Bud, Not Buddy

The Watsons Go to Birmingham—1963 was Curtis’s first book. It won him critical acclaim as well as the Golden Kite Award, A Newbury Honor, and a Coretta Scott King honor. Like Bud, Not Buddy, The Watsons Go to Birmingham—1963 is a work of historical fiction told from the perspective of a 10-year-old African American boy. While Bud’s experiences happen within the economic instability of the Great Depression, the Watsons have to navigate the American South during the Civil Rights Movement and in the aftermath of the 16th Street Baptist Church bombing that happened in Birmingham in 1963. Many of the themes that Bud, Not Buddy deals with are also present in the novel, such as race, home, and community. Both novels are coming of age stories about a young African American boy learning about the world as he learns about himself. Unsurprisingly many of Curtis’s works are told from the vantage point of a young African American boy; another noteworthy work, Newbury Honor book, and Coretta Scott King winner is Elijah of Buxton, which Curtis wrote in 2007. Another work of historical fiction, the book follows an 11-year-old boy who is the first freed person born in a refugee camp made up of former runaway slaves in Brixton Canada. In 2012, Curtis also published The Mighty Miss Malone, a book about the character Deza Malone (who first appeared in Bud, Not Buddy), her family, and her experiences navigating the uncertain times of the Great Depression.
Key Facts about Bud, Not Buddy

Extra Credit for Bud, Not Buddy

Character Inspirations. Lucky Lewis and Herman C. Calloway in Bud, Not Buddy are based on Curtis’s two grandfathers. Curtis has stated that he wished he talked to them and listened to their stories more when they were alive.

Top Three. Curtis has stated that his three favorite writers are Mark Twain, Zora Neale Hurston, and Toni Morrison. His favorite of the three changes depending on what day he’s asked and the mood he’s in. 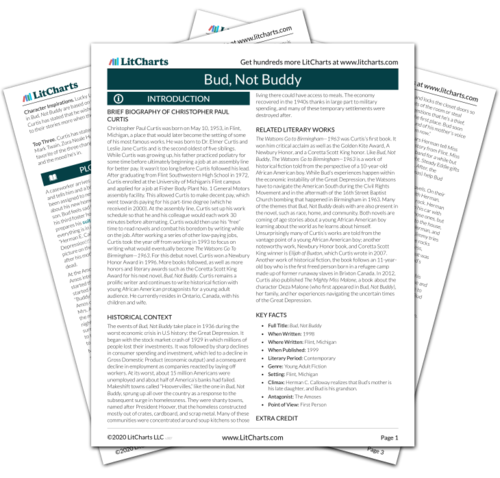 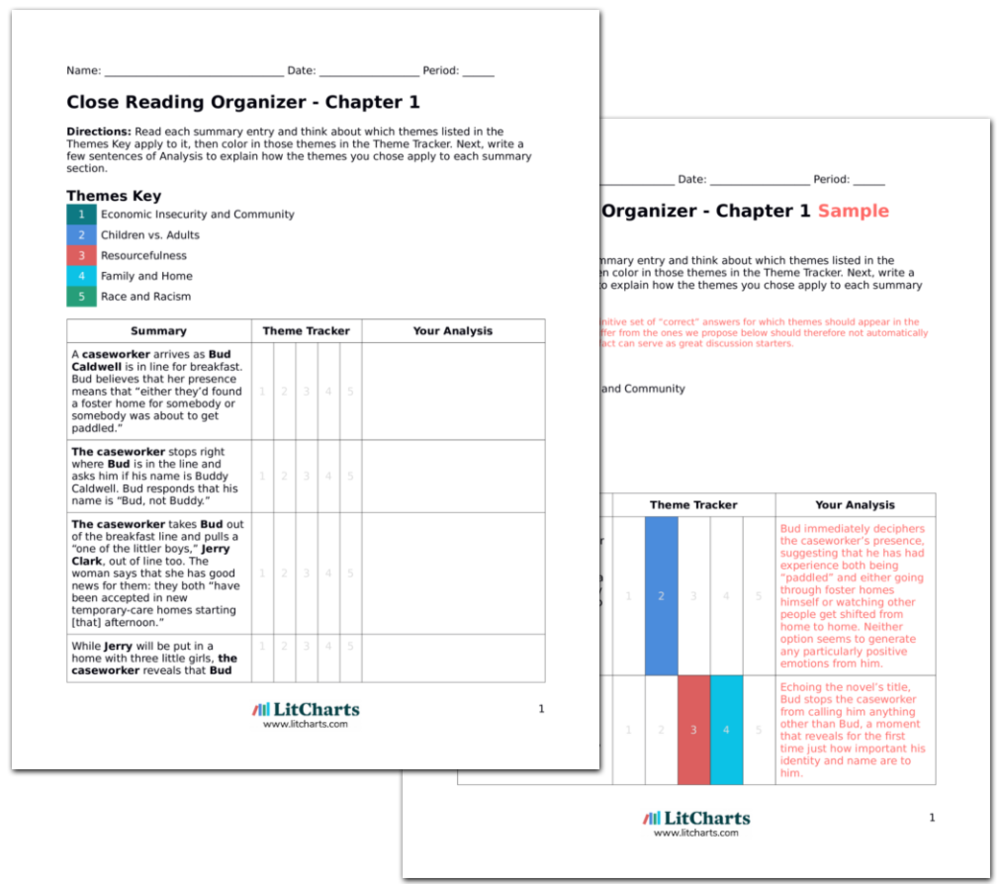