Welcome to the LitCharts study guide on André Aciman's Call Me By Your Name. Created by the original team behind SparkNotes, LitCharts are the world's best literature guides.

Call Me By Your Name: Introduction

A concise biography of André Aciman plus historical and literary context for Call Me By Your Name.

Call Me By Your Name: Plot Summary

A quick-reference summary: Call Me By Your Name on a single page.

Call Me By Your Name: Detailed Summary & Analysis

In-depth summary and analysis of every chapter of Call Me By Your Name. Visual theme-tracking, too.

Call Me By Your Name: Themes

Explanations, analysis, and visualizations of Call Me By Your Name's themes.

Call Me By Your Name: Quotes

Call Me By Your Name's important quotes, sortable by theme, character, or chapter.

Call Me By Your Name: Characters

Description, analysis, and timelines for Call Me By Your Name's characters.

Call Me By Your Name: Symbols

Explanations of Call Me By Your Name's symbols, and tracking of where they appear.

Call Me By Your Name: Theme Wheel

An interactive data visualization of Call Me By Your Name's plot and themes.

André Aciman was born into a multilingual family in Alexandria, Egypt in 1951. Growing up speaking French, Italian, Greek, Judeo-Spanish, and Arabic, Aciman left Egypt with his family in 1965, when it was unsafe for Jewish people to live in the region. After a brief period as refugees in Italy, he, his mother, and his brother moved to New York City in 1968, where Aciman eventually earned a degree in Comparative Literature from Lehman College. Later, he received a PhD in the same field from Harvard. In 1995, he published a memoir entitled Out of Egypt, which garnered wide acclaim. He has also published two essay collections and four novels, including Call Me by Your Name and The Enigma Variations. He is currently Distinguished Professor at the CUNY Graduate Center and lives with his wife in New York City.
Get the entire Call Me By Your Name LitChart as a printable PDF.
"My students can't get enough of your charts and their results have gone through the roof." -Graham S.
Download 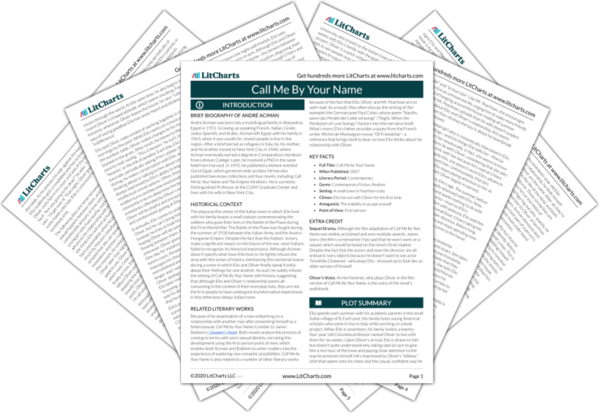 Historical Context of Call Me By Your Name

The piazza at the center of the Italian town in which Elio lives with his family boasts a small statute commemorating the soldiers who gave their lives in the Battle of the Piave during the First World War. The Battle of the Piave was fought during the summer of 1918 between the Italian Army and the Austro-Hungarian Empire. Despite the fact that the Italians’ victory made a significant impact on the future of the war, most Italians failed to recognize its historical importance. Although Aciman doesn’t specify what town Elio lives in, he lightly infuses the area with this sense of history, mentioning this memorial statue during a scene in which Elio and Oliver finally speak frankly about their feelings for one another. As such, he subtly infuses the setting of Call Me By Your Name with history, suggesting that although Elio and Oliver’s relationship seems all-consuming in the context of their everyday lives, they are not the first people to have undergone transformative experiences in this otherwise sleepy Italian town.

Other Books Related to Call Me By Your Name

Because of its examination of a man embarking on a relationship with another man after presenting himself as a heterosexual, Call Me by Your Name is similar to James Baldwin’s Giovanni’s Room. Both novels analyze the process of coming to terms with one’s sexual identity, narrating this development using the first-person point of view, which enables both Aciman and Baldwin to usher readers into the experience of exploring new romantic possibilities. Call Me by Your Name is also related to a number of other literary works because of the fact that Elio, Oliver, and Mr. Pearlman are so well-read. As a result, they often discuss the writing of (for example) the German poet Paul Celan, whose poem “Nacths, wenn das Pendel der Liebe schwingt” (“Night, When the Pendulum of Love Swings”) factors into the narrative itself. What’s more, Elio’s father provides a quote from the French writer Michel de Montaigne’s essay “Of Friendship”—a reference that brings itself to bear on how Elio thinks about his relationship with Oliver.
Key Facts about Call Me By Your Name

Extra Credit for Call Me By Your Name

Sequel Drama. Although the film adaptation of Call Me By Your Name was widely-acclaimed and won multiple awards, James Ivory (the film’s screenwriter) has said that he won’t work on a sequel, which would be based on the novel’s final chapter. Despite the fact that the actors and even the director are all onboard, Ivory objects because he doesn’t want to see actor Timothée Chalamet—who plays Elio—dressed up to look like an older version of himself.

Oliver’s Voice. Armie Hammer, who plays Oliver in the film version of Call Me By Your Name, is the voice of the novel’s audiobook. 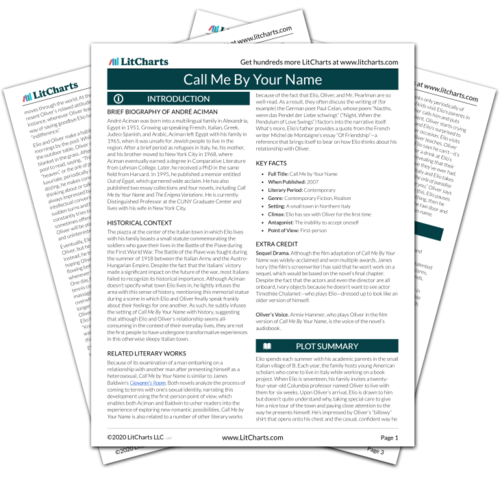 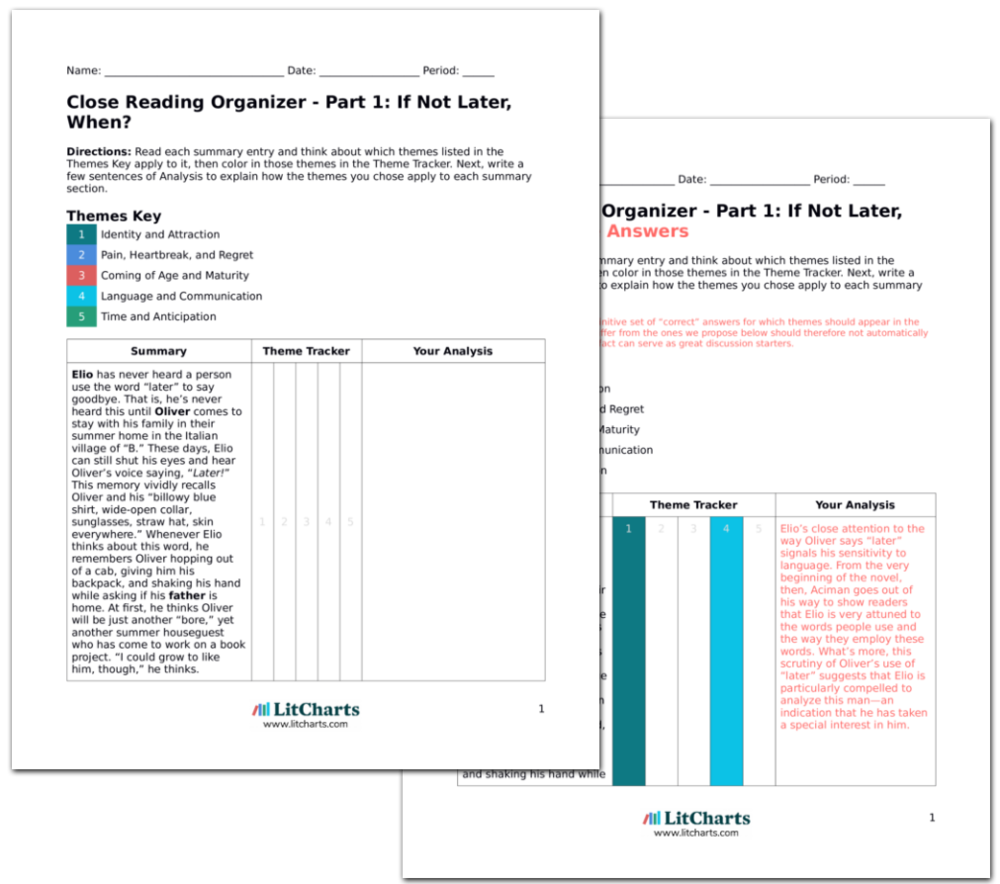