Get LitCharts A+
LitCharts assigns a color and icon to each theme in Candide, which you can use to track the themes throughout the work.

Candide is a central text of the Enlightenment. The Enlightenment was an intellectual movement in Europe which flourished during the 17th and 18th centuries. It questioned, and often harshly criticized, traditional views of science, religion, and the state. Enlightenment thinkers believed in using reason and scientific experiment, rather than doctrine and custom, as a guide in the remaking and improvement of life and society. They also advocated for greater legal and social equality between men.

As a novel of the Enlightenment, Candide satirizes and critiques almost every powerful institution of its era. Churches, the aristocracy, and the military are viciously lampooned. Characters like the Grand Inquisitor, the Bulgarian Captain, and the haughty Young Baron showcase the prejudice and irrationality of 18th century institutions. This direct, irreverent criticism of subjects considered sacred for centuries prior is central both to the Enlightenment, and to Voltaire's work. So, too, is the faith in the power of human reason and equality between men, best represented by the garden at the end of the novel.

The Enlightenment and Social Criticism ThemeTracker 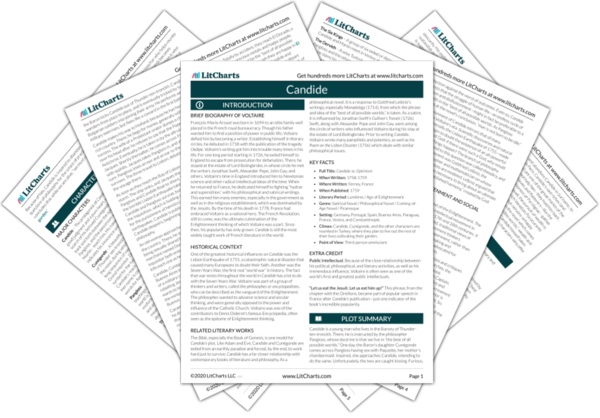 The Enlightenment and Social Criticism Quotes in Candide

Below you will find the important quotes in Candide related to the theme of The Enlightenment and Social Criticism.
Chapter 2 Quotes

Candide, all stupefied, could not yet very well realize how he was a hero. He resolved one fine day in spring to go for a walk, marching straight before him, believing that it was a privilege of the human as well as of the animal species to make use of their legs as they pleased.

“My friend,” said the orator to him, “do you believe the Pope to be Anti-Christ?”
“I have not heard it,” answered Candide; “but whether he be, or whether he be not, I want bread.”

“It is more likely,” said he, “mankind have a little corrupted nature, for they were not born wolves, and they have become wolves; God has given them neither cannon of four-and-twenty pounders, nor bayonets; and yet they have made cannon and bayonets to destroy one another. Into this account I might throw not only bankrupts, but Justice which seizes on the effects of bankrupts to cheat the creditors.”

“Our men defended themselves like the Pope's soldiers; they flung themselves upon their knees, and threw down their arms, begging of the corsair an absolution in articulo mortis.”

They landed at Buenos Ayres. Cunegonde, Captain Candide, and the old woman, waited on the Governor, Don Fernando d'Ibaraa, y Figueora, y Mascarenes, y Lampourdos, y Souza. This nobleman had a stateliness becoming a person who bore so many names. He spoke to men with so noble a disdain, carried his nose so loftily, raised his voice so unmercifully, assumed so imperious an air, and stalked with such intolerable pride, that those who saluted him were strongly inclined to give him a good drubbing.

“It is an admirable government. The kingdom is upwards of three hundred leagues in diameter, and divided into thirty provinces; there the Fathers possess all, and the people nothing; it is a masterpiece of reason and justice.”

“Reverend Father, all the quarterings in the world signify nothing; I rescued your sister from the arms of a Jew and of an Inquisitor; she has great obligations to me, she wishes to marry me; Master Pangloss always told me that all men are equal, and certainly I will marry her.”

“A Jesuit! a Jesuit! we shall be revenged, we shall have excellent cheer, let us eat the Jesuit, let us eat him up!”

“...but being surrounded by inaccessible rocks and precipices, we have hitherto been sheltered from the rapaciousness of European nations, who have an inconceivable passion for the pebbles and dirt of our land, for the sake of which they would murder us to the last man.”

“All that is very well,” answered Candide, “but let us cultivate our garden.”