Download this LitChart! (PDF)
Teachers and parents! Struggling with distance learning? Our Teacher Edition on Caste can help.

Welcome to the LitCharts study guide on Isabel Wilkerson's Caste. Created by the original team behind SparkNotes, LitCharts are the world's best literature guides.

A concise biography of Isabel Wilkerson plus historical and literary context for Caste.

A quick-reference summary: Caste on a single page.

In-depth summary and analysis of every chapter of Caste. Visual theme-tracking, too.

Explanations of Caste's symbols, and tracking of where they appear.

An interactive data visualization of Caste's plot and themes.

Isabel Wilkerson was born in Washington, D.C. in the early 1960s to parents who’d left Virginia during the Great Migration—the movement of six million African Americans from the rural South to the Northern, Midwestern, and Western states between 1916 and 1970. Wilkerson attended Howard University, where she studied journalism and acted as editor-in-chief of the college’s newspaper, The Hilltop. After college, she pursued a career in journalism and soon became the Chicago Bureau Chief of The New York Times. She received a Pulitzer Prize in Journalism for her reporting on the Midwestern floods of 1993—she was the first African American woman to receive the honor. She has taught journalism at Emory, Princeton, Northwestern, and Columbia, and she is the author of The Warmth of Other Suns and Caste.
Get the entire Caste LitChart as a printable PDF.
"My students can't get enough of your charts and their results have gone through the roof." -Graham S.
Download 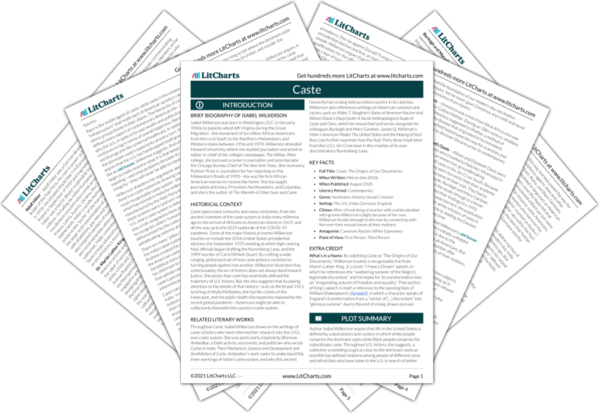 Caste spans many centuries and many continents, from the ancient invention of the caste system in India many millennia ago to the arrival of Africans on American shores in 1619, and all the way up to the 2019 outbreak of the COVID-19 pandemic. Some of the major historical events Wilkerson touches on include the 2016 United States presidential election, the September 1935 meeting at which high-ranking Nazi officials began drafting the Nuremberg Laws, and the 1989 murder of Carol DiMaiti Stuart. By crafting a wide-ranging, global portrait of how caste poisons societies by turning people against one another, Wilkerson illustrates that, unfortunately, the arc of history does not always bend toward justice. She posits that caste has essentially defined the trajectory of U.S. history. But she also suggests that by paying attention to the details of that history—such as the brutal 1921 lynching of Wylie McNeeley, the horrific crimes of the Holocaust, and the public health discrepancies exposed by the recent global pandemic—Americans might be able to collectively dismantle the country’s caste system.

Other Books Related to Caste

Throughout Caste, Isabel Wilkerson draws on the writings of caste scholars who have informed her research into the U.S.’s own caste system. She was particularly inspired by Bhimrao Ambedkar, a Dalit activist, economist, and politician who wrote Castes in India: Their Mechanism, Genesis and Development and Annihilation of Caste. Ambedkar’s work seeks to understand the inner workings of India’s caste system, and why this ancient hierarchy has so long held an entire country in its clutches. Wilkerson also references writings on American casteism and racism, such as Alden T. Vaughan’s Roots of American Racism and Allison Davis’s Deep South: A Social Anthropological Study of Caste and Class, which he researched and wrote alongside his colleagues Burleigh and Mary Gardner. James Q. Whitman’s Hitler’s American Model: The United States and the Making of Nazi Race Law further examines how the Nazi Party drew inspiration from the U.S.’s Jim Crow laws in the creation of its own discriminatory Nuremberg Laws.
Key Facts about Caste

What’s in a Name. By subtitling Caste as “The Origins of Our Discontents,” Wilkerson invokes a recognizable line from Martin Luther King, Jr.’s iconic “I Have a Dream” speech, in which he references the “sweltering summer of the Negro’s legitimate discontent” and his hopes for its transformation into an “invigorating autumn of freedom and equality.” That section of King’s speech is itself a reference to the opening lines of William Shakespeare’s Richard III, in which a character speaks of England’s transformation from a “winter of […] discontent” into “glorious summer” due to the end of a long, drawn-out war. 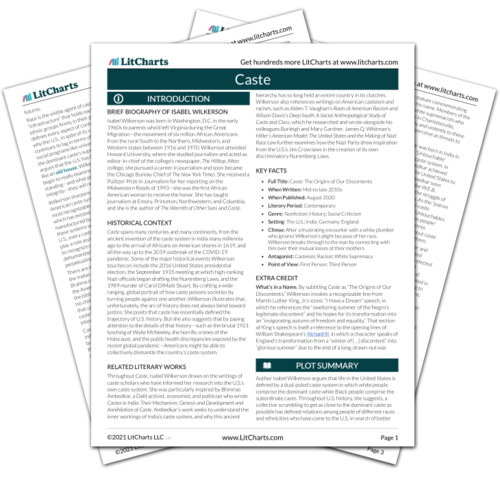 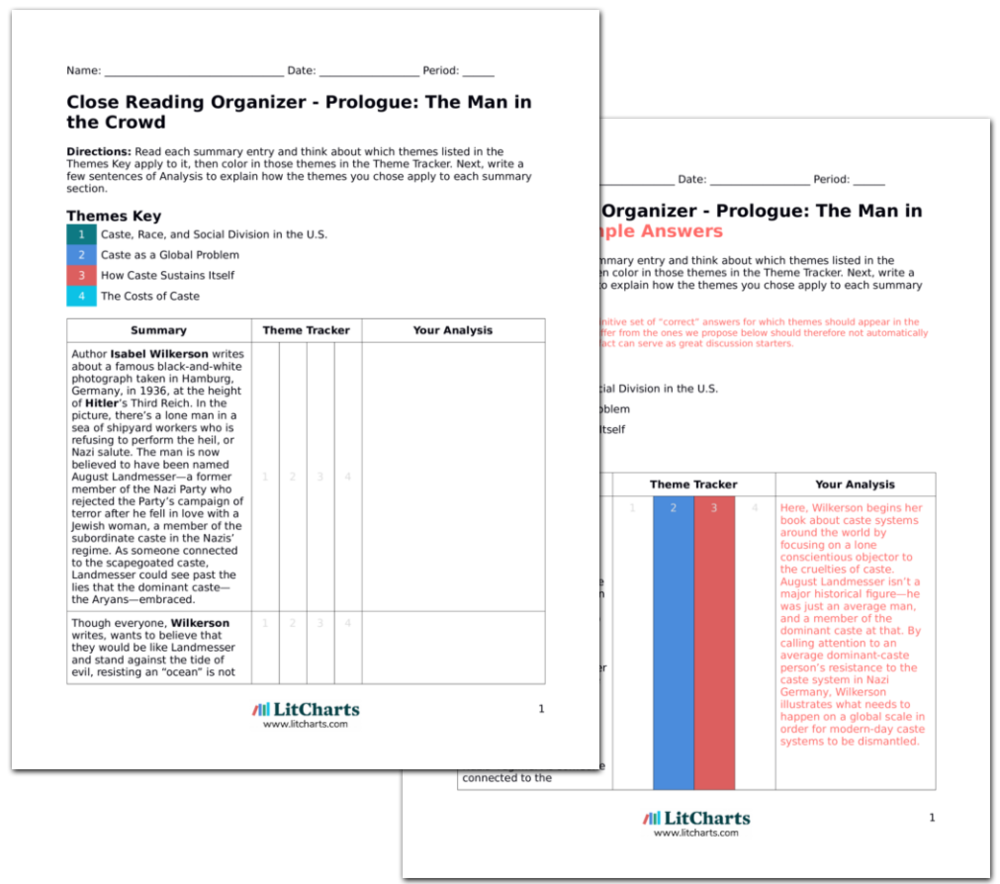