Download this LitChart! (PDF)
Teachers and parents! Struggling with distance learning? Our Teacher Edition on Changes in the Land can help.

Welcome to the LitCharts study guide on William Cronon's Changes in the Land. Created by the original team behind SparkNotes, LitCharts are the world's best literature guides.

Changes in the Land: Introduction

A concise biography of William Cronon plus historical and literary context for Changes in the Land.

Changes in the Land: Plot Summary

A quick-reference summary: Changes in the Land on a single page.

In-depth summary and analysis of every chapter of Changes in the Land. Visual theme-tracking, too.

Changes in the Land: Themes

Explanations, analysis, and visualizations of Changes in the Land's themes.

Changes in the Land: Quotes

Changes in the Land's important quotes, sortable by theme, character, or chapter.

Changes in the Land: Characters

Description, analysis, and timelines for Changes in the Land's characters.

Description, analysis, and timelines for Changes in the Land's terms.

Changes in the Land: Symbols

Explanations of Changes in the Land's symbols, and tracking of where they appear.

Changes in the Land: Theme Wheel

An interactive data visualization of Changes in the Land's plot and themes.

William Cronon is an environmental historian who holds a BA from the University of Wisconsin-Madison; MA, MPhil, and PhD degrees from Yale; and a DPhil (second PhD) from Oxford. Changes to the Land began as a seminar paper he wrote as a graduate student at Yale. It was published in 1983 and was Cronon’s first book. His first academic position was as a professor of history at Yale, where he received tenure. In 1991, he published his second book, Nature’s Metropolis: Chicago and the Great West, and the following year he coedited a volume entitled Under an Open Sky: Rethinking America’s Western Past. He left Yale after 10 years in 1993, taking a professorship at the University of Wisconsin-Madison, where he still works today. In 1995 he published another book, Uncommon Ground: Rethinking the Human Place in Nature. He is the recipient of Guggenheim and MacArthur Fellowships along with many other honors and awards.
Get the entire Changes in the Land LitChart as a printable PDF.
"My students can't get enough of your charts and their results have gone through the roof." -Graham S.
Download 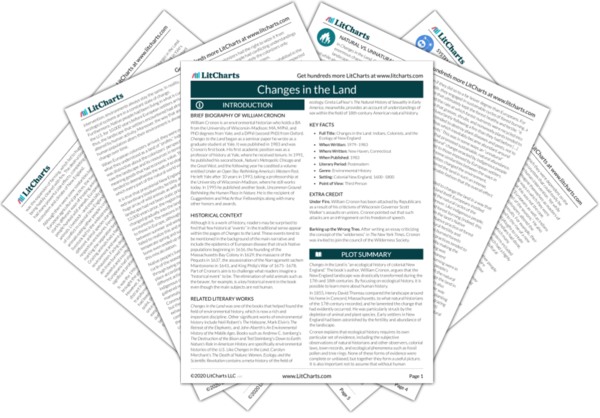 Historical Context of Changes in the Land

Although it is a work of history, readers may be surprised to find that few historical “events” in the traditional sense appear within the pages of Changes to the Land. These events tend to be mentioned in the background of the main narrative and include the epidemics of European disease that struck Native populations beginning in 1616, the founding of the Massachusetts Bay Colony in 1629, the massacre of the Pequots in 1637, the assassination of the Narragansett sachem Miantonomo in 1643, and King Philip’s War of 1675–1678. Part of Cronon’s aim is to challenge what readers imagine a “historical event” to be. The elimination of wild animals such as the beaver, for example, is a key historical event in the book even though the main subjects are not human.

Other Books Related to Changes in the Land

Changes in the Land was one of the books that helped found the field of environmental history, which is now a rich and important discipline. Other significant works of environmental history include Neil Robert’s The Holocene, Mark Elvin’s The Retreat of the Elephants, and John Aberth’s An Environmental History of the Middle Ages. Books such as Andrew C. Isenberg’s The Destruction of the Bison and Ted Steinberg’s Down to Earth: Nature’s Role in American History are specifically environmental histories of the U.S. Like Changes in the Land, Carolyn Merchant’s The Death of Nature: Women, Ecology, and the Scientific Revolution contains a meta-history of the field of ecology. Greta LaFleur’s The Natural History of Sexuality in Early America, meanwhile, provides an account of understandings of sex within the field of 18th-century American natural history.
Key Facts about Changes in the Land

Extra Credit for Changes in the Land

Under Fire. William Cronon has been attacked by Republicans as a result of his criticisms of Wisconsin Governor Scott Walker’s assaults on unions. Cronon pointed out that such attacks are an infringement on his freedom of speech.

Barking up the Wrong Tree. After writing an essay criticizing the concept of the “wilderness” in The New York Times, Cronon was invited to join the council of the Wilderness Society. 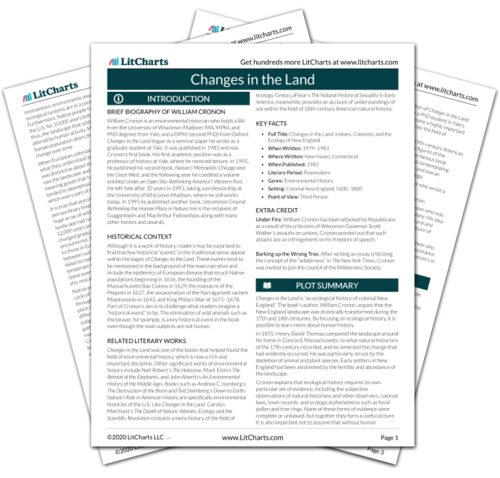 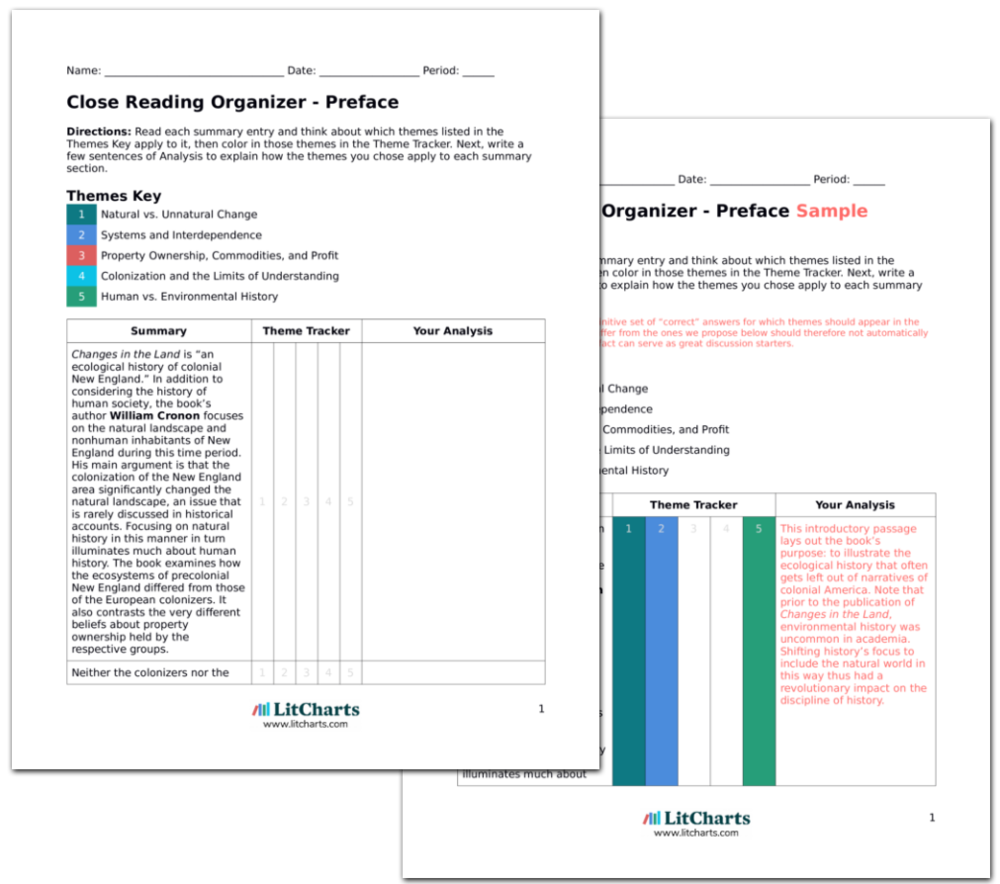