Download this LitChart! (PDF)
Teachers and parents! Struggling with distance learning? Our Teacher Edition on Charlie and the Chocolate Factory can help.

Golden Tickets symbolize the system of wealth, power, and privilege that guides Charlie’s world. Mr. Wonka hides five Golden Tickets in five Wonka candy bars and announces that the five children who find the Golden Tickets will have the opportunity to tour his factory. At first glance, this seems like a system based purely on luck and chance—anyone who buys a Wonka bar has a chance at finding a Golden Ticket. It’s possible for anyone to succeed if they happen to get lucky.

But as the first four children find their Golden Tickets, the novel reveals that the system is far more corrupt, as it favors people with wealth and privilege. Augustus Gloop, Violet Beauregarde, and Mike Teavee, for instance, find Golden Tickets because their families have the money to buy the children huge numbers of candy bars—thereby upping the chances that the children will find Golden Tickets. The circumstances surrounding the discovery of Veruca Salt’s Golden Ticket make this even clearer: Mr. Salt converts his peanut-shelling factories into candy bar-unwrapping factories until one of his employees finds a ticket for Veruca. This requires a great deal of money and influence, and it suggests that it’s easier to achieve success in Charlie’s world if a person has the money to buy it.

Nevertheless, it’s important that Charlie still manages to find a ticket, despite only being able to afford a total of four candy bars throughout his search. It’s possible, this suggests, for someone without wealth, power, or privilege to get lucky and find success—it’s just rare. With this, the novel makes it clear that power and privilege, on the whole, make it much easier to get ahead—though there’s always the chance that someone like Charlie, who lives in poverty, can also experience a stroke of luck and better their position in the world.

Golden Tickets Quotes in Charlie and the Chocolate Factory

The Charlie and the Chocolate Factory quotes below all refer to the symbol of Golden Tickets. For each quote, you can also see the other characters and themes related to it (each theme is indicated by its own dot and icon, like this one:

“Wouldn’t it be something, Charlie, to open a bar of candy and see a Golden Ticket glistening inside!”

“It certainly would, Grandpa. But there isn’t a hope,” Charlie said sadly. “I only get one bar a year.”

“You never know darling,” said Grandma Georgina. “It’s your birthday next week. You have as much chance as anybody else.”

“I’m afraid that simply isn’t true,” said Grandpa George. “The kids who are going to find the Golden Tickets are the ones who can afford to buy candy bars every day. Our Charlie only gets one a year. There isn’t a hope.”

The picture showed a nine-year-old boy who was so enormously fat he looked as though he had been blown up with a powerful pump. Great flabby folds of fat bulged out from every part of his body, and his face was like a monstrous ball of dough with two small greedy curranty eyes peering out upon the world.

“Oh, it was terrible! My little Veruca got more and more upset each day, and every time I went home she would scream at me, ‘Where’s my Golden Ticket! I want my Golden Ticket!’ And she would lie there for hours on the floor, kicking and yelling in the most disturbing way. Well, sir, I just hated to see my little girl feeling unhappy like that, so I vowed I would keep up the search until I’d got her what she wanted. Then suddenly… on the evening of the fourth day, one of my women workers yelled, ‘I’ve got it! A Golden Ticket!’” […]

“I don’t think the girl’s father played it quite fair, Grandpa, do you?” Charlie murmured.

“He spoils her,” Grandpa Joe said. “And no good can ever come from spoiling a child like that, Charlie, you mark my words.”

“‘And who’s she to criticize, anyway, because if you ask me, I’d say that her jaws are going up and down almost as much as mine are just from yelling at me every minute of the day.’”

“‘Now, Violet,’ Mrs. Beauregarde said from a far corner of the room where she was standing on the piano to avoid being trampled by the mob.

“‘All right, Mother, keep your hair on!’ Miss Beauregarde shouted.”

The tall bony old figure of Grandpa Joe could be seen standing quietly among them, and beside him, holding tightly on to his hand, was little Charlie Bucket himself.

All the children, except Charlie, had both their mothers and fathers with them, and it was a good thing that they had, otherwise the whole party might have gotten out of hand. They were so eager to get going that their parents were having to hold them back by force to prevent them from climbing over the gates.

Unlock with LitCharts A+
Get the entire Charlie and the Chocolate Factory LitChart as a printable PDF.
"My students can't get enough of your charts and their results have gone through the roof." -Graham S.
Download 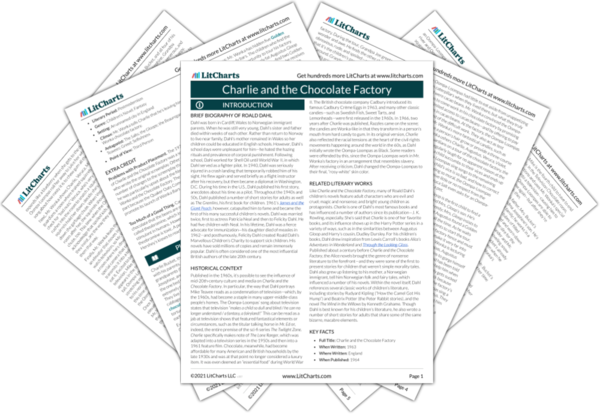 Golden Tickets Symbol Timeline in Charlie and the Chocolate Factory

The timeline below shows where the symbol Golden Tickets appears in Charlie and the Chocolate Factory. The colored dots and icons indicate which themes are associated with that appearance.

...a lifetime supply of Wonka candy. He’ll choose which children get to visit with five Golden Tickets that have been printed on golden paper and tucked into normal-looking candy bars. They could... (full context)

...“dotty,” but Grandpa Joe insists that this is brilliant. Now, everyone will be looking for Golden Tickets —it’s a great marketing scheme. And, Grandpa Joe says, it would be so exciting to... (full context)

Grandpa Joe asks Charlie if he agrees that it would be amazing to find a Golden Ticket . Charlie sadly says that it would, but there’s no chance—he only gets one candy... (full context)

A boy named Augustus Gloop finds the first Golden Ticket the very next day. The paper prints a huge picture of him on the front... (full context)

On the day before Charlie’s birthday, a small girl named Veruca Salt finds the second Golden Ticket . Her family lives in a big city far away, and her parents are extremely... (full context)

...open his bar in front of them all in the morning, in case there’s a Golden Ticket inside. (full context)

...and Mrs. Bucket gently tells him that he shouldn’t be too disappointed if there’s no Golden Ticket inside. Grandma Georgina points out that whether there’s a ticket inside or not, Charlie will... (full context)

They all know it’s silly to expect that Charlie will find the Golden Ticket inside this candy bar. But even though they know this, they also know there’s a... (full context)

When Mr. Bucket gets home that night, his paper announces that two more Golden Tickets have been found. After supper, Mr. Bucket reads that a Miss Violet Beauregarde found the... (full context)

Mr. Bucket reads that the fourth Golden Ticket was found by a boy named Mike Teavee. The reporter shares that young Mike was... (full context)

...still one ticket left. Grandma Georgina is certain that the child who finds the final Golden Ticket will be “some nasty little beast who doesn’t deserve it.” (full context)

...10-cent coin. He whispers to Charlie that he wants another shot at finding the last Golden Ticket . Charlie asks if Grandpa Joe is sure he wants to spend his money on... (full context)

...paper first, giggling that they don’t have a hope—but there’s a tiny chance there’s a Golden Ticket inside this bar. After more dithering, Charlie tells Grandpa Joe to open the bar all... (full context)

...and Charlie’s grandparents struggle to keep warm. Nobody in the Bucket family cares about the Golden Tickets anymore—they only care about staying warm and having enough to eat. (full context)

...starts to unwrap it, he sees gold. The shopkeeper screams that Charlie found the last Golden Ticket . Within moments, a crowd of people gathers around Charlie. Everyone wants to see Charlie... (full context)

...She’s serving the grandparents their soup, so Charlie rushes into the room and waves his Golden Ticket . In a shout, he tells them how he found the dollar and then the... (full context)

...sight in front of him. They fill him in, and Charlie offers his father the Golden Ticket . (full context)

...invitation out loud. Mr. Wonka congratulates the recipient and explains that he’s inviting all the Golden Ticket holders to see his factory. After the tour, they’ll be sent home with trucks loaded... (full context)

...be outside the factory gates at 10 a.m. with one or two family members—and their Golden Ticket . (full context) 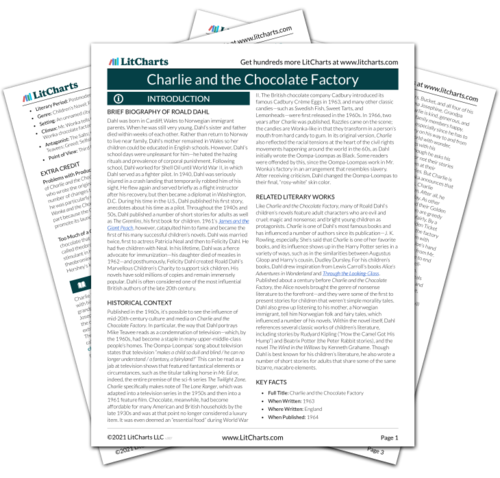 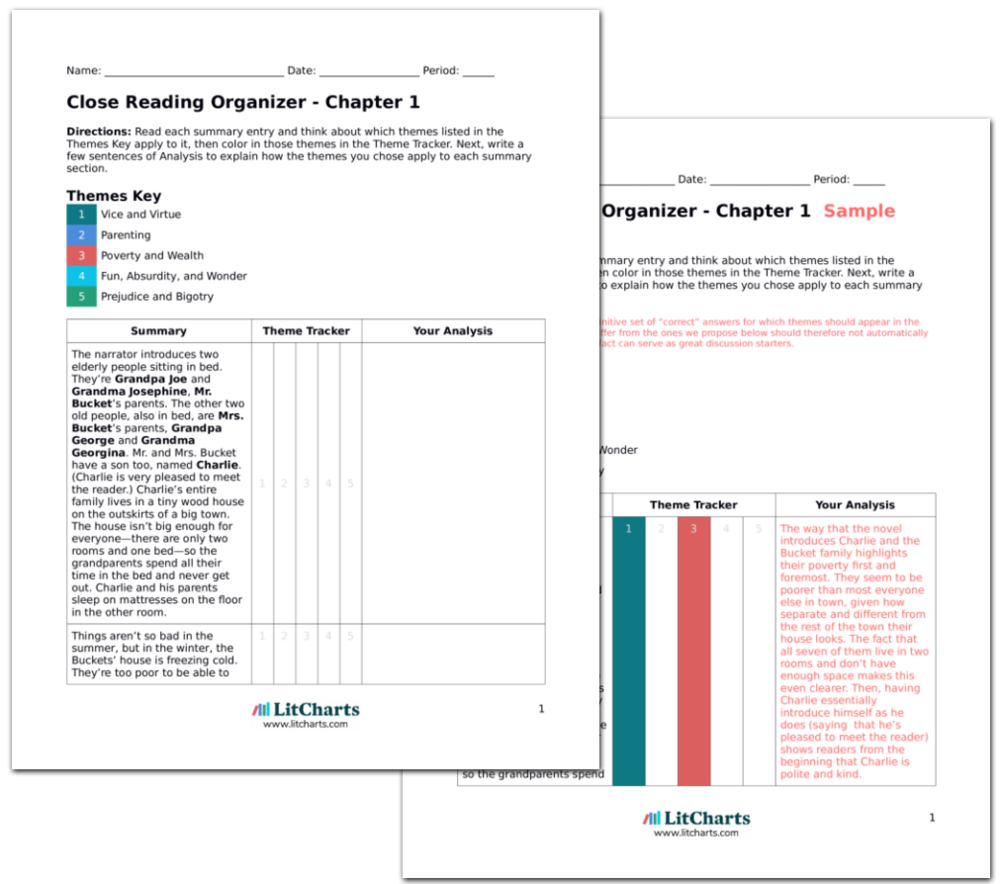