Download this LitChart! (PDF)
Teachers and parents! Struggling with distance learning? Our Teacher Edition on Childhood’s End can help.

Welcome to the LitCharts study guide on Arthur C. Clarke's Childhood’s End. Created by the original team behind SparkNotes, LitCharts are the world's best literature guides.

A concise biography of Arthur C. Clarke plus historical and literary context for Childhood’s End.

A quick-reference summary: Childhood’s End on a single page.

In-depth summary and analysis of every chapter of Childhood’s End. Visual theme-tracking, too.

Explanations of Childhood’s End's symbols, and tracking of where they appear.

An interactive data visualization of Childhood’s End's plot and themes.

Arthur Clarke was born in Somerset, England in 1917, the oldest of four children. He spent his childhood on a farm, looking at the stars through a homemade telescope and reading science fiction magazines, including the literary magazine Amazing Stories, which he credited as a major influence on his own entrance into science fiction. During World War II, Clarke was a member of the Royal Air Force for five years, working as a radar specialist and helping to develop new guidance systems. After the war’s end, Clarke attended King’s College in London, studying physics and mathematics. He continued working as a writer and editor, and was also the president of the British Interplanetary Society during two different periods. Clarke was a large influence on the development of geostationary satellites, foreseeing that they someday could make powerful relay points for telecommunication. He also wrote several nonfiction titles about futurism and the implications of space travel on society. During this period of his life, Clarke began to gain a reputation as a science fiction author, beginning with the novella, Against the Fall of Night. The publication of Childhood’s End, his third science fiction novel, made him as one of the most popular authors of his time. Clarke wrote many more Hugo and Nebula Award-winning novels, developed the screenplay of 2001: A Space Odyssey with Stanley Kubrick, and hosted a number of TV shows dedicated to exploration of the paranormal. Clarke and Robert Heinlein, two of the “Big Three” authors of 20th century science fiction (the third being Isaac Asimov), became good friends until political disagreements drove them apart in the 1980s. During his final years, Clarke was knighted for his contributions to science. He died in 2008, named by many as the greatest science fiction author of all time, with well over 100 novels, essays, and short stories to his credit.
Get the entire Childhood’s End LitChart as a printable PDF.
"My students can't get enough of your charts and their results have gone through the roof." -Graham S.
Download 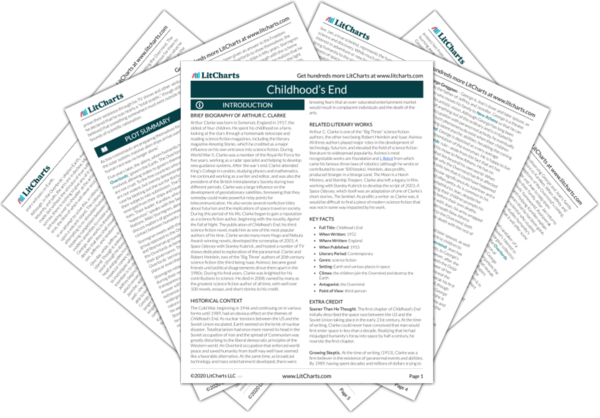 The Cold War, beginning in 1946 and continuing on in various forms until 1989, had an obvious effect on the themes of Childhood’s End. As nuclear tensions between the US and the Soviet Union escalated, Earth seemed on the brink of nuclear disaster. Totalitarianism had once more reared its head in the Soviet occupation of Iran and the spread of Communism was greatly disturbing to the liberal democratic principles of the Western world. An Overlord occupation that enforced world peace and saved humanity from itself may well have seemed like a favorable alternative. At the same time, as broadcast technology and mass entertainment developed, there were brewing fears that an over-saturated entertainment market would result in complacent individuals and the death of the arts.

Other Books Related to Childhood’s End

Arthur C. Clarke is one of the “Big Three” science fiction authors, the other two being Robert Heinlein and Isaac Asimov. All three authors played major roles in the development of technology, futurism, and elevated the field of science fiction literature to widespread popularity. Asimov’s most recognizable works are Foundation and I, Robot from which came his famous three laws of robotics (although he wrote or contributed to over 500 books). Heinlein, also prolific, produced Stranger in a Strange Land, The Moon Is a Harsh Mistress, and Starship Troopers. Clarke also left a legacy in film, working with Stanley Kubrick to develop the script of 2001: A Space Odyssey, which itself was an adaptation of one of Clarke’s short stories, The Sentinel. As prolific a writer as Clarke was, it would be difficult to find a piece of modern science fiction that was not in some way impacted by his work.
Key Facts about Childhood’s End

Sooner Than He Thought. The first chapter of Childhood’s End initially described the space race between the US and the Soviet Union taking place in the early 21st century. At the time of writing, Clarke could never have conceived that man would first enter space in less than a decade. Realizing that he had misjudged humanity’s foray into space by half a century, he rewrote the first chapter.

Growing Skeptic. At the time of writing (1953), Clarke was a firm believer in the existence of paranormal events and abilities. By 1989, having spent decades and millions of dollars trying to prove their existence through his TV shows and other ventures, he declared that he was nearly a “total sceptic,” though still believed that something somewhere must exist outside the bounds of scientific rationalism. 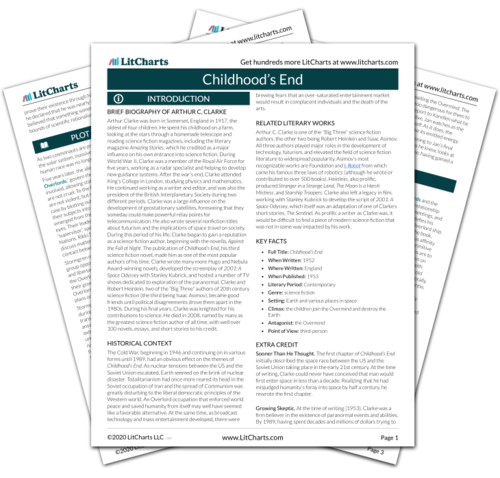 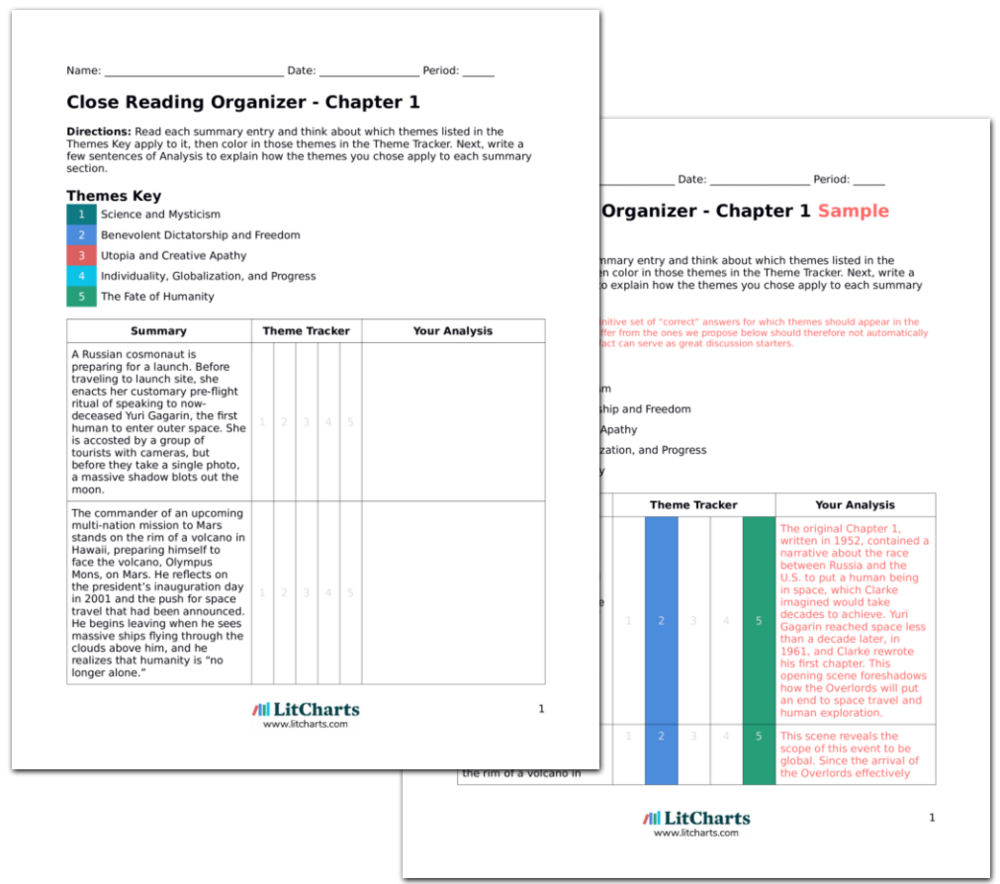