Download this LitChart! (PDF)
Teachers and parents! Struggling with distance learning? Our Teacher Edition on Circe can help.

Welcome to the LitCharts study guide on Madeline Miller's Circe. Created by the original team behind SparkNotes, LitCharts are the world's best literature guides.

A concise biography of Madeline Miller plus historical and literary context for Circe.

A quick-reference summary: Circe on a single page.

In-depth summary and analysis of every chapter of Circe. Visual theme-tracking, too.

Explanations of Circe's symbols, and tracking of where they appear.

An interactive data visualization of Circe's plot and themes.

Madeline Miller was born on July 24, 1978 in Boston. She grew up in Philadelphia and New York City, where she frequently visited the Metropolitan Museum of Art. Her favorite exhibits were on Egypt and Ancient Greece. These interests were reflected in her later studies; in the late 1990s and early 2000s, she attended Brown University, where she received her BA and MA in Classics. She also briefly studied toward a PhD at the University of Chicago’s Committee on Social Thought, and toward an MFA at the Yale School of Drama. In 2011, she published her first novel, Song of Achilles, which received the 2012 Orange Prize for Fiction. Following this success, Miller published Circe in 2018, which won several awards and was short-listed for the 2019 Women’s Prize in Fiction. Miller currently lives near Philadelphia, where she continues writing and teaches Greek, Latin, and Shakespeare at the high school level.
Get the entire Circe LitChart as a printable PDF.
"My students can't get enough of your charts and their results have gone through the roof." -Graham S.
Download 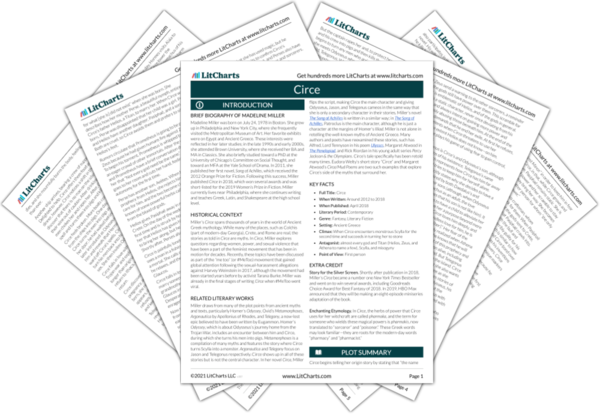 Miller’s Circe spans thousands of years in the world of Ancient Greek mythology. While many of the places, such as Colchis (part of modern-day Georgia), Crete, and Rome are real, the stories as told in Circe are myths. In Circe, Miller explores questions regarding women, power, and sexual violence that have been a part of the feminist movement that has been in motion for decades. Recently, these topics have been discussed as part of the “me too” (or #MeToo) movement that gained global attention following the sexual-harassment allegations against Harvey Weinstein in 2017, although the movement had been started years before by activist Tarana Burke. Miller was already in the final stages of writing Circe when #MeToo went viral.

Other Books Related to Circe

Miller draws from many of the plot points from ancient myths and texts, particularly Homer’s Odyssey, Ovid’s Metamorphoses, Argonautica by Apollonius of Rhodes, and Telegony, a now-lost epic believed to have been written by Eugammon. Homer’s Odyssey, which is about Odysseus’s journey home from the Trojan War, includes an encounter between him and Circe, during which she turns his men into pigs. Metamorphoses is a compilation of many myths and features the story where Circe turns Scylla into a monster. Argonautica and Telegony focus on Jason and Telegonus respectively. Circe shows up in all of these stories but is not the central character. In her novel Circe, Miller flips the script, making Circe the main character and giving Odysseus, Jason, and Telegonus cameos in the same way that she is only a secondary character in their stories. Miller’s novel The Song of Achilles is written in a similar way; in The Song of Achilles, Patroclus is the main character, although he is just a character at the margins of Homer’s Illiad. Miller is not alone in retelling the well-known myths of Ancient Greece. Many authors and poets have reexamined these stories, such has Alfred, Lord Tennyson in his poem Ulysses, Margaret Atwood in The Penelopiad, and Rick Riordan in his young adult series Percy Jackson & the Olympians. Circe’s tale specifically has been retold many times. Eudora Welty’s short story “Circe” and Margaret Atwood’s Circe/Mud Poems are two such examples that explore Circe’s side of the myths that surround her.
Key Facts about Circe

Story for the Silver Screen. Shortly after publication in 2018, Miller’s Circe became a number one New York Times Bestseller and went on to win several awards, including Goodreads Choice Award for Best Fantasy of 2018. In 2019, HBO Max announced that they will be making an eight-episode miniseries adaptation of the book.

Enchanting Etymology. In Circe, the herbs of power that Circe uses for her witchcraft are called pharmaka, and the term for someone who wields these magical powers is pharmakis, now translated to “sorcerer” and “poisoner.” These Greek words may look familiar—they are roots for the modern-day words “pharmacy” and “pharmacist.” 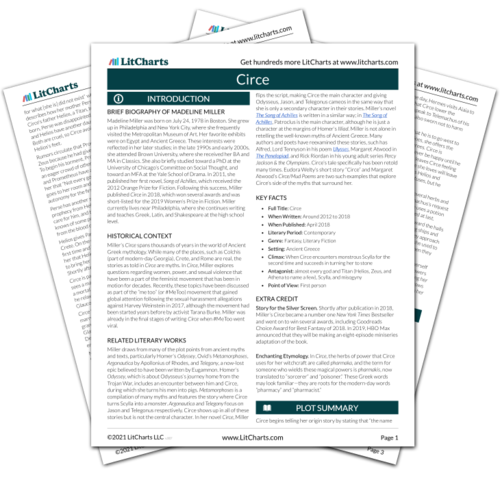 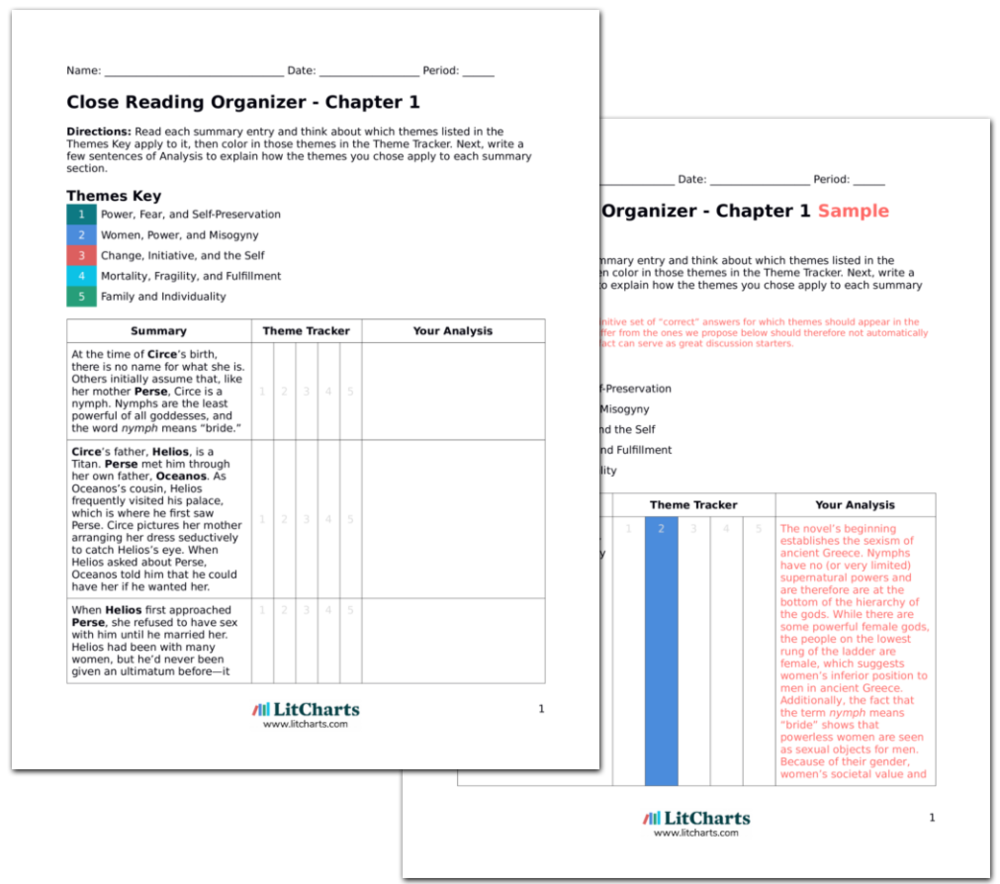