Download this LitChart! (PDF)
Teachers and parents! Struggling with distance learning? Our Teacher Edition on Citizen: An American Lyric can help.

Welcome to the LitCharts study guide on Claudia Rankine's Citizen: An American Lyric. Created by the original team behind SparkNotes, LitCharts are the world's best literature guides.

A concise biography of Claudia Rankine plus historical and literary context for Citizen: An American Lyric.

A quick-reference summary: Citizen: An American Lyric on a single page.

In-depth summary and analysis of every chapter of Citizen: An American Lyric. Visual theme-tracking, too.

Explanations, analysis, and visualizations of Citizen: An American Lyric's themes.

Description, analysis, and timelines for Citizen: An American Lyric's characters.

Explanations of Citizen: An American Lyric's symbols, and tracking of where they appear.

An interactive data visualization of Citizen: An American Lyric's plot and themes.

Claudia Rankine was born in Kingston, Jamaica, in 1963 and later moved to New York City with her family when she was seven years old. In New York, she went to Roman Catholic elementary and secondary schools, both of which were located in the Bronx. She later received a degree from Williams College in 1986 before going on to obtain a Master of Fine Arts in poetry from Columbia University in 1993. She published her first book of poetry, Nothing in Nature Is Private, in 1994, followed by her second book, The End of the Alphabet, in 1998. Three years later, she published a longer, book-length poem entitled Plot. Her first widely recognized work was the multimedia book Don’t Let Me Be Lonely: An American Lyric, which was published in 2004 and in some ways served as a stylistic precursor to 2014’s Citizen: An American Lyric, which was a finalist for the National Book Award. Citizen also won Rankine the NAACP Image Award for poetry, the PEN Open Book Award, and the National Book Critics Circle Award for poetry, among other prizes. She has served as a professor of literature and creative writing at Barnard College, the University of Georgia, the University of Houston, Pomona College, and Case Western Reserve University. She currently teaches at Yale University.
Get the entire Citizen: An American Lyric LitChart as a printable PDF.
"My students can't get enough of your charts and their results have gone through the roof." -Graham S.
Download 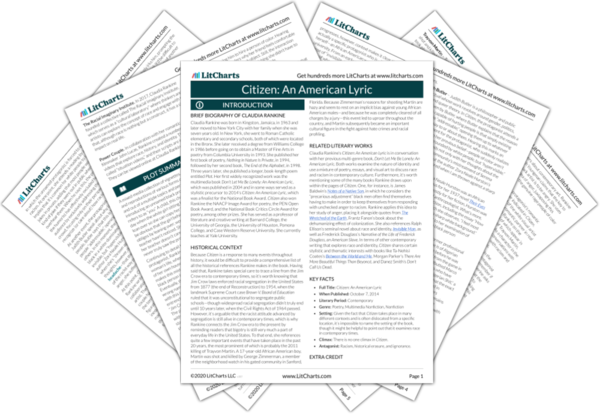 Because Citizen is a response to many events throughout history, it would be difficult to provide a comprehensive list of all the historical references Rankine makes in the book. Having said that, Rankine takes special care to trace a line from the Jim Crow era to contemporary times, so it’s worth knowing that Jim Crow laws enforced racial segregation in the United States from 1877 (the end of Reconstruction) to 1954, when the landmark Supreme Court case Brown V. Board of Education ruled that it was unconstitutional to segregate public schools—though widespread racial segregation didn’t truly end until 10 years later, when the Civil Rights Act of 1964 passed. However, it’s arguable that the racist attitude advanced by segregation is still alive in contemporary times, which is why Rankine connects the Jim Crow era to the present by reminding readers that bigotry is still very much a part of everyday life in the United States. To that end, she references quite a few important events that have taken place in the past 20 years, the most prominent of which is probably the 2011 killing of Trayvon Martin. A 17-year-old African American boy, Martin was shot and killed by George Zimmerman, a member of the neighborhood watch in his gated community in Sanford, Florida. Because Zimmerman’s reasons for shooting Martin are hazy and seem to rest on an implicit bias against young African American males—and because he was completely cleared of all charges by a jury—this event led to uproar throughout the country, and Martin subsequently became an important cultural figure in the fight against hate crimes and racial profiling.

Other Books Related to Citizen: An American Lyric

Claudia Rankine’s Citizen: An American Lyric is in conversation with her previous multi-genre book, Don’t Let Me Be Lonely: An American Lyric. Both works examine the nature of identity and use a mixture of poetry, essays, and visual art to discuss race and racism in contemporary culture. Furthermore, it’s worth mentioning some of the many books Rankine draws upon within the pages of Citizen. One, for instance, is James Baldwin’s Notes of a Native Son, in which he considers the “precarious adjustment” black men often find themselves having to make in order to keep themselves from responding with unchecked anger to racism. Rankine applies this idea to her study of anger, placing it alongside quotes from The Wretched of the Earth, Frantz Fanon’s book about the dehumanizing effect of colonization. She also references Ralph Ellison’s seminal novel about race and identity, Invisible Man, as well as Frederick Douglass’s Narrative of the Life of Frederick Douglass, an American Slave. In terms of other contemporary writing that explores race and identity, Citizen shares certain stylistic and thematic interests with books like Ta-Nehisi Coates’s Between the World and Me, Morgan Parker’s There Are More Beautiful Things Than Beyoncé, and Danez Smith’s Don’t Call Us Dead.
Key Facts about Citizen: An American Lyric

Power Couple. In collaboration with her romantic partner, the filmmaker John Lucas, Rankine created a number of conceptual videos that explore race, history, and identity. These videos are called “situation videos,” and their scripts are included in Citizen. They can be viewed online at Claudia Rankine’s website. 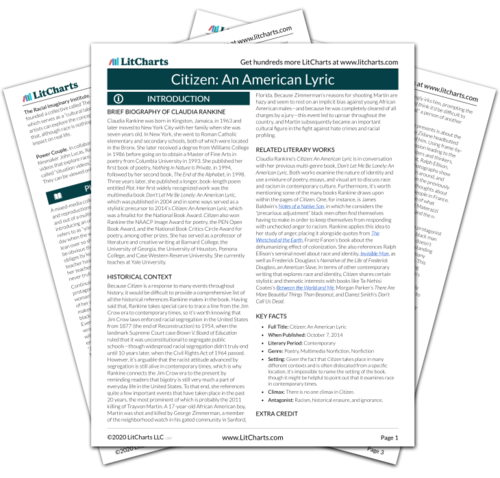 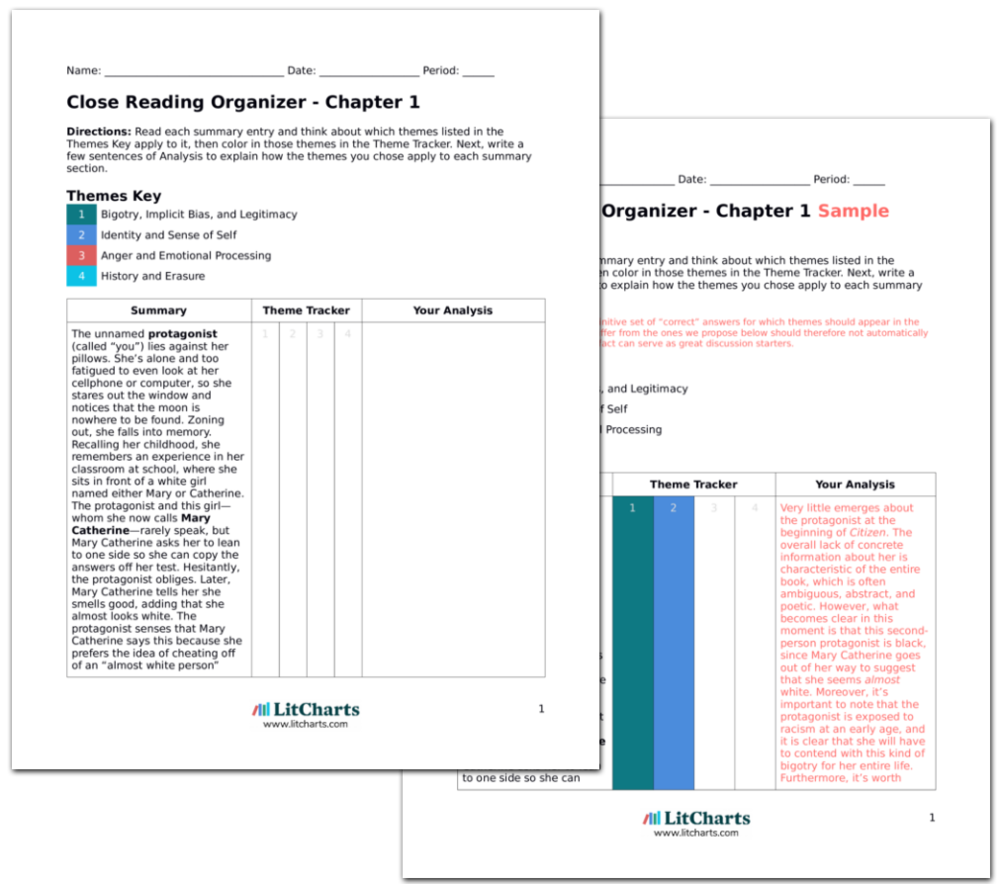