Download this LitChart! (PDF)
Teachers and parents! Struggling with distance learning? Our Teacher Edition on Civil Disobedience can help.

Welcome to the LitCharts study guide on Henry David Thoreau's Civil Disobedience. Created by the original team behind SparkNotes, LitCharts are the world's best literature guides.

A concise biography of Henry David Thoreau plus historical and literary context for Civil Disobedience.

A quick-reference summary: Civil Disobedience on a single page.

In-depth summary and analysis of every of Civil Disobedience. Visual theme-tracking, too.

Explanations of Civil Disobedience's symbols, and tracking of where they appear.

An interactive data visualization of Civil Disobedience's plot and themes.

Henry David Thoreau was born on July 12, 1817 in Concord Massachusetts, to John Thoreau, a pencil maker, and Cynthia Dunbar. He finished his primary and secondary education in Concord before completing his undergraduate education at Harvard. Though he suffered from medical and financial hardships during his undergraduate years, he ultimately graduated with distinction in 1937. He briefly took a job as a teacher before starting work at his father’s pencil factory. Thoreau returned to the education field when he decided to start a school in Concord with his brother in 1839, before closing it permanently two years later, when his brother fell ill. By this point, Thoreau had already begun to show interest in different pursuits, primarily nature and writing. Shortly after the closure of the school, Ralph Waldo Emerson, one of the foremost thinkers and philosophers of Thoreau’s time (who also happened to be his neighbor, mentor, and friend) invited Thoreau to live with him as a handy man. Though Thoreau had become an informal mentee of Emerson’s upon his graduation from Harvard, it wasn’t until he began living with Emerson over the next two years that he fully immersed himself in Emerson’s teachings. Thoreau began writing seriously under Emerson’s guidance and began to publish some poems and essays. At the same time, he learned all about the philosophy of Transcendentalism, a mode of living that stressed the importance of putting spiritual concerns over material ones. Later, with Emerson’s help, Thoreau built a small house on land that Emerson owned on the shores of Walden Pond. Thoreau moved into the house on July 4th, 1845. Over the next two years, surrounded by nature, he wrote his first two books and tried to live by Transcendentalist doctrines. After leaving the pond, he published his books and found modest success. For the rest of his writing career, he journaled extensively about nature and continued publishing and revising essays about issues  important to him, such as the abolition of slavery and the importance of practicing civil disobedience. Thoreau died of tuberculosis in May 1862.
Get the entire Civil Disobedience LitChart as a printable PDF.
"My students can't get enough of your charts and their results have gone through the roof." -Graham S.
Download 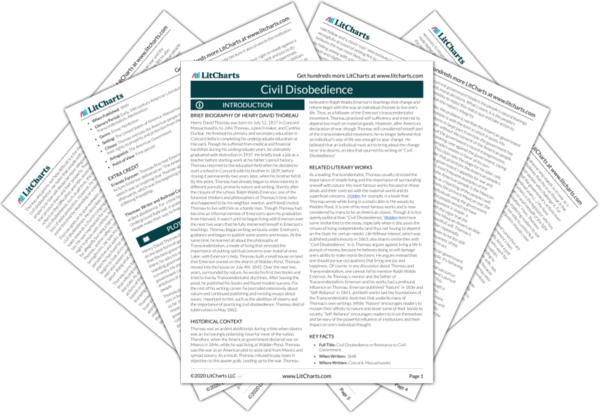 Thoreau was an ardent abolitionist during a time when slavery was an increasingly polarizing issue for most of the nation. Therefore, when the American government declared war on Mexico in 1846, while he was living at Walden Pond, Thoreau saw the war as an American plot to seize land from Mexico and spread slavery. As a result, Thoreau refused to pay taxes in objection to this power grab. Leading up to the war, Thoreau believed in Ralph Waldo Emerson’s teachings that change and reform begin with the way an individual chooses to live one’s life. Thus, as a follower of the Emerson’s transcendentalist movement, Thoreau practiced self-sufficiency and tried not to depend too much on material goods. However, after America’s declaration of war, though Thoreau still considered himself part of the transcendentalist movement, he no longer believed that an individual’s way of life was enough to spur change. He believed that an individual must act to bring about the change he or she desires, an idea that spurred his writing of “Civil Disobedience.”

Other Books Related to Civil Disobedience

As a leading Transcendentalist, Thoreau usually stressed the importance of simple living and the importance of surrounding oneself with nature. His most famous works focused on these ideals and their contrast with the material world and its superficial concerns. Walden, for example, is a book that Thoreau wrote while living in a small cabin in the woods by Walden Pond. It is one of his most famous works and is now considered by many to be an American classic. Though it is less openly political than “Civil Disobedience,” Walden does have some similarities to the essay, especially when it discusses the virtues of living independently (and thus not having to depend on the State for certain needs). Life Without Interest, which was published posthumously in 1863, also shares similarities with “Civil Disobedience.” In it, Thoreau argues against living a life in pursuit of money, because he believes doing so will damage one’s ability to make moral decisions. He argues instead that one should pursue occupations that bring one joy and happiness. Of course, in any discussion about Thoreau and Transcendentalism, one cannot fail to mention Ralph Waldo Emerson. As Thoreau’s mentor and the father of Transcendentalism, Emerson and his works had a profound influence on Thoreau. Emerson published “Nature” in 1836 and “Self-Reliance” in 1841, and both works laid the foundations of the Transcendentalist doctrines that underlie many of Thoreau’s own writings. While “Nature” encourages readers to reclaim their affinity to nature and sever some of their bonds to society, “Self-Reliance” encourages readers to trust themselves and be wary of the powerful influence of institutions and their impact on one’s individual thought.
Key Facts about Civil Disobedience

Friends Forever: Thoreau first met Emerson during a Harvard lecture Emerson delivered on “The American Scholar.” The speech was so inspiring that Thoreau approached Emerson afterwards, which was the beginning of what would go on to be a lifelong friendship.

Thoreau: Writer and Railroad Conductor. Thoreau was an ardent abolitionist. For a time he served as a conductor for the Underground Railroad, a system that helped fugitive enslaved people make their way to free states and Canada. 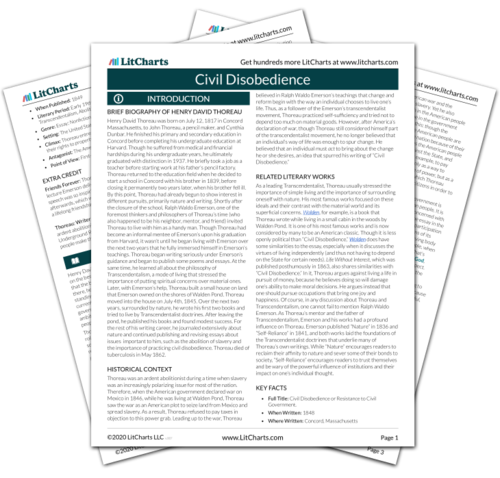 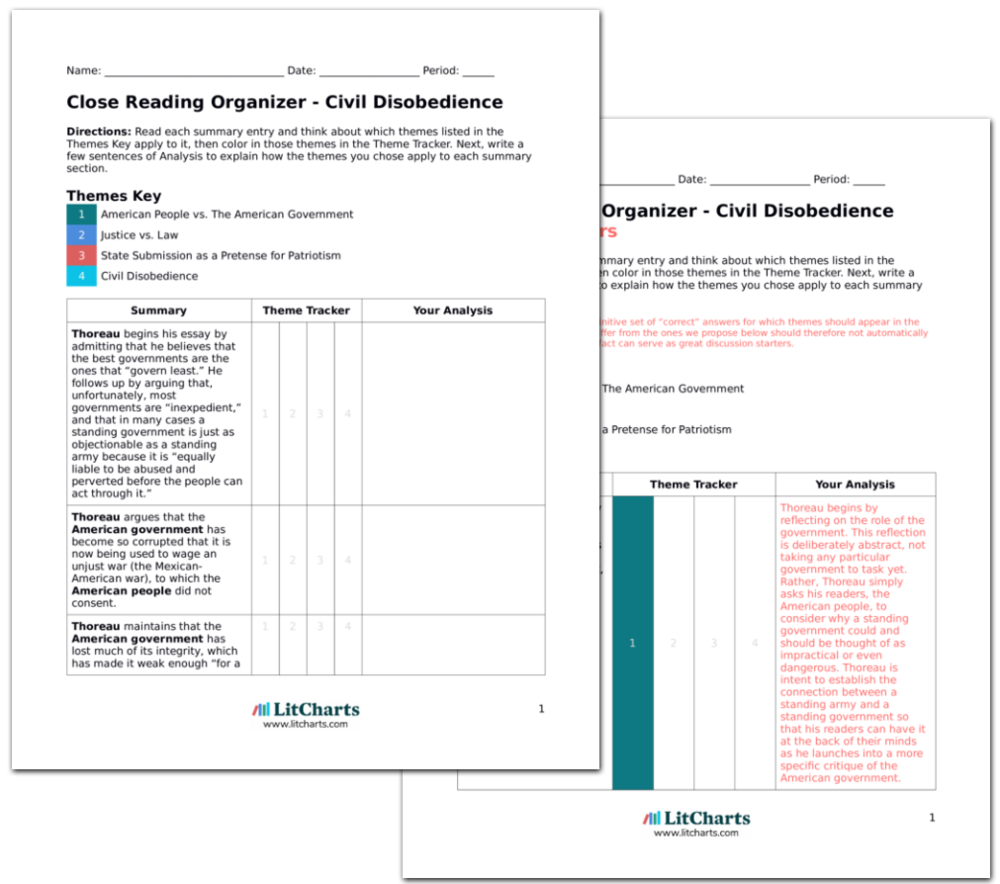