Download this LitChart! (PDF)
Teachers and parents! Struggling with distance learning? Our Teacher Edition on Civil Peace can help.

Welcome to the LitCharts study guide on Chinua Achebe's Civil Peace. Created by the original team behind SparkNotes, LitCharts are the world's best literature guides.

A concise biography of Chinua Achebe plus historical and literary context for Civil Peace.

A quick-reference summary: Civil Peace on a single page.

In-depth summary and analysis of every of Civil Peace. Visual theme-tracking, too.

Explanations of Civil Peace's symbols, and tracking of where they appear.

An interactive data visualization of Civil Peace's plot and themes.

Chinua Achebe was born in Ogidi, Nigeria in 1930, which was at that time a colony of the British Empire. Achebe and his family were members of the Igbo, a minority ethnic group in Nigeria who lived primarily in the southeast of the country. As a child, Achebe learned Igbo stories and read European literature. While studying at University College in Ibadan, Nigeria, Achebe became disillusioned with European depictions of Africa and Africans and decided to become a writer himself. In 1958, he published his first and most well-known novel, Things Fall Apart, depicting European colonization of Nigeria from an African perspective. Things Fall Apart went on to become the most famous work of African literature in the world, renowned for its detailed and revolutionary depiction of Igbo life. After its success, Achebe worked to promote postcolonial African literature as the editor of the African Writers Series. During the Nigerian Civil War (1967-1970), in which the predominantly Igbo state of Biafra attempted to secede from Nigeria, Achebe supported the Biafran government and opposed the Nigerian state, which he felt was a remnant of British colonialism. He and his family suffered from the devastation of the war, and many of his friends and colleagues were harmed or killed in the violence. Throughout his life, he wrote several more novels and numerous short stories, all featuring African settings and protagonists, while dealing with uniquely African issues. In 1990, Achebe was a victim of a car crash which paralyzed him from the waist down. He spent the rest of his life in a wheelchair. He continued to live in America but remained active in Nigerian politics until his death in 2013, at the age of 82.
Get the entire Civil Peace LitChart as a printable PDF.
"My students can't get enough of your charts and their results have gone through the roof." -Graham S.
Download 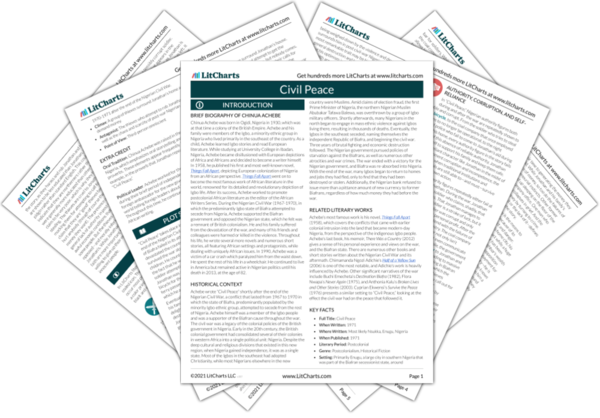 Achebe wrote “Civil Peace” shortly after the end of the Nigerian Civil War, a conflict that lasted from 1967 to 1970 in which the state of Biafra, predominantly populated by the minority Igbo ethnic group, attempted to secede from the rest of Nigeria. Achebe himself was a member of the Igbo people and was a supporter of the Biafran cause throughout the war. The civil war was a legacy of the colonial policies of the British government in Nigeria. Early in the 20th century, the British colonial government had consolidated several of their colonies in western Africa into a single political unit: Nigeria. Despite the deep cultural and religious divisions that existed in this new region, when Nigeria gained independence, it was as a single state. Most of the Igbos in the southeast had adopted Christianity, while most Nigerians elsewhere in the new country were Muslims. Amid claims of election fraud, the first Prime Minister of Nigeria, the northern Nigerian Muslim Abubakar Tafawa Balewa, was overthrown by a group of Igbo military officers. Shortly afterwards, many Nigerians in the north began to engage in mass ethnic violence against Igbos living there, resulting in thousands of deaths. Eventually, the Igbos in the southeast seceded, naming themselves the independent Republic of Biafra, and beginning the civil war. Three years of brutal fighting and economic destruction followed. The Nigerian government pursued policies of starvation against the Biafrans, as well as numerous other atrocities and war crimes. The war ended with a victory for the Nigerian government, and Biafra was re-absorbed into Nigeria. With the end of the war, many Igbos began to return to homes and jobs they had fled, only to find that they had been destroyed or stolen. Additionally, the Nigerian bank refused to issue more than a pittance amount of new currency to former Biafrans, regardless of how much money they had before the war.

Other Books Related to Civil Peace

Achebe’s most famous work is his novel, Things Fall Apart (1958), which covers the conflicts that came with earlier colonial intrusion into the land that became modern-day Nigeria, from the perspective of the indigenous Igbo people. Achebe’s last book, his memoir, There Was a Country (2012) gives a sense of his personal experience and views on the war, and the Biafran state. There are numerous other books and short stories written about the Nigerian Civil War and its aftermath. Chimamanda Ngozi Adichie’s Half of a Yellow Sun (2006) is one of the most notable, and Adichie’s work is heavily influenced by Achebe. Other significant narratives of the war include Buchi Emecheta’s Destination Biafra (1982), Flora Nwapa’s Never Again (1975), and Anthonia Kalu’s Broken Lives and Other Stories (2003). Cyprian Ekwensi’s Survive the Peace (1976) presents a similar setting to “Civil Peace,” looking at the effect the civil war had on the peace that followed it.
Key Facts about Civil Peace

Oral Tradition. Chinua Achebe was raised in the Igbo culture in Nigeria, which emphasizes oral storytelling and memorized proverbs. These elements appear frequently in his work; for example, in the proverb that Jonathan repeats throughout “Civil Peace.”

Political Leader. Achebe worked for the Biafran government during their brief period of independence. He served as a foreign ambassador for the new government and travelled the world telling foreign leaders about the Biafran struggle. Throughout this time, he continued to write and promote African writing. 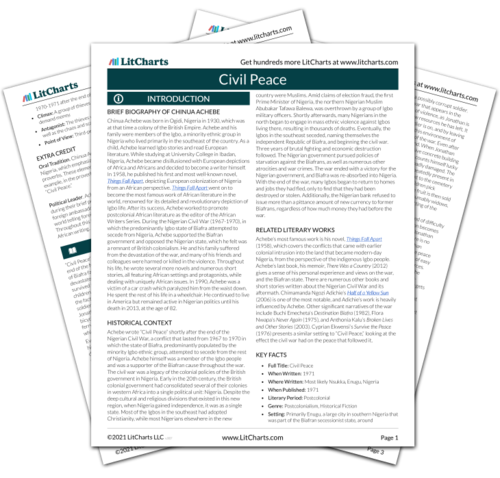 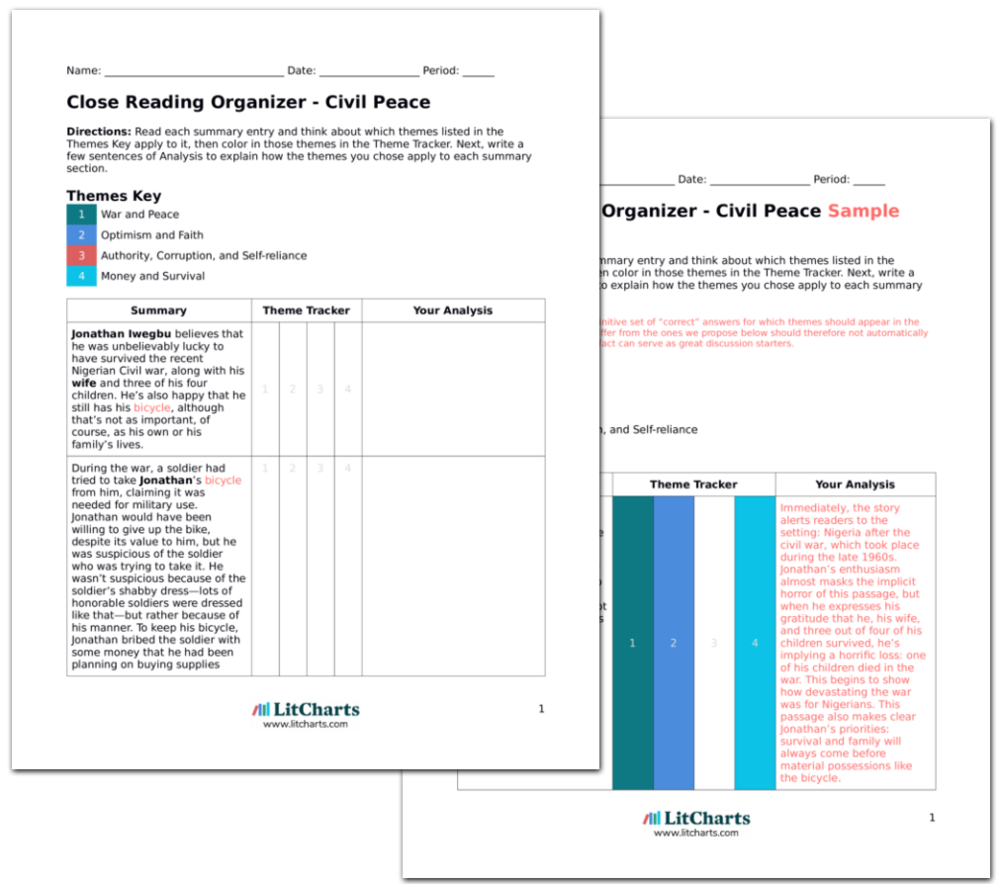