Download this LitChart! (PDF)
Teachers and parents! Struggling with distance learning? Our Teacher Edition on Clap When You Land can help.

Welcome to the LitCharts study guide on Elizabeth Acevedo's Clap When You Land. Created by the original team behind SparkNotes, LitCharts are the world's best literature guides.

Clap When You Land: Introduction

A concise biography of Elizabeth Acevedo plus historical and literary context for Clap When You Land.

Clap When You Land: Plot Summary

A quick-reference summary: Clap When You Land on a single page.

In-depth summary and analysis of every chapter of Clap When You Land. Visual theme-tracking, too.

Clap When You Land: Themes

Explanations, analysis, and visualizations of Clap When You Land's themes.

Clap When You Land: Quotes

Clap When You Land's important quotes, sortable by theme, character, or chapter.

Clap When You Land: Characters

Description, analysis, and timelines for Clap When You Land's characters.

Clap When You Land: Symbols

Explanations of Clap When You Land's symbols, and tracking of where they appear.

Clap When You Land: Theme Wheel

An interactive data visualization of Clap When You Land's plot and themes.

Elizabeth Acevedo was born in New York to Dominican parents. She’s the youngest child and only girl. At age 14, Acevedo participated in one of her first slam poetry events at the Nuyorican Poets Cafe and went on to perform at open mic events around the city. She later earned a BA in performing arts from George Washington University and an MFA from the University of Maryland. Since graduating, she’s taught poetry to teens in a variety of settings, as well as eighth-grade English through the Teach for America program. The Poet X (2018) was her first novel, and part of her inspiration for writing it—and then continuing to write novels about Dominican characters—was spending time with students who didn’t see themselves reflected in classic literature or in novels commonly taught in schools. All of her published works have won numerous awards, and she’s also been recognized for her spoken word poetry. She lives in Washington, D.C. with her husband.
Get the entire Clap When You Land LitChart as a printable PDF.
"My students can't get enough of your charts and their results have gone through the roof." -Graham S.
Download 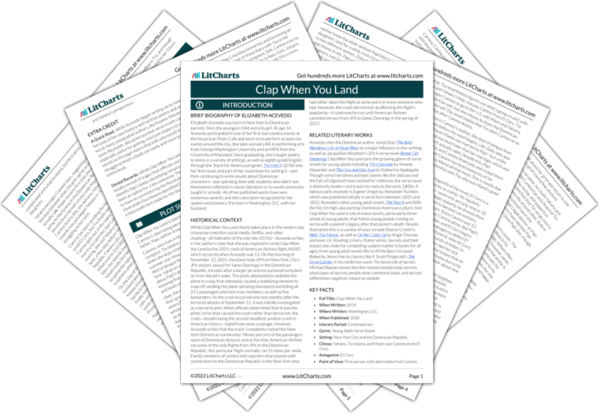 Historical Context of Clap When You Land

While Clap When You Land clearly takes place in the modern day (characters mention social media, Netflix, and video chatting—all hallmarks of the mid-late 2010s)—Acevedo writes in her author’s note that she was inspired to write Clap When You Land by the 2001 crash of American Airlines flight AA587, which occurred when Acevedo was 13. On the morning of November 12, 2001, the plane took off from New York City’s JFK airport, bound for Santo Domingo in the Dominican Republic, minutes after a larger jet and encountered turbulent air from the jet’s wake. The pilots attempted to stabilize the plane in a way that ultimately caused a stabilizing element to snap off, sending the plane spiraling downward and killing all 251 passengers and nine crew members, as well as five bystanders. As the crash occurred only two months after the terrorist attacks of September 11, it was initially investigated as a terrorist plot. When officials determined that it was the pilots’ error that caused the crash rather than terrorism, the crash—despite being the second-deadliest aviation crash in American history—faded from news coverage. However, Acevedo writes that the crash “completely rocked the New York Dominican community.” Ninety percent of the passengers were of Dominican descent, and at the time, American Airlines ran some of the only flights from JFK to the Dominican Republic; this particular flight normally ran 51 times per week. Family members of victims told reporters that anyone with connections to the Dominican Republic in the New York area had either taken the flight at some point or knew someone who had. However, the crash did not end up affecting the flight’s popularity—it continued to run until American Airlines canceled service from JFK to Santo Domingo in the spring of 2013.

Other Books Related to Clap When You Land

Acevedo cites the Dominican author Junot Díaz (The Brief Wondrous Life of Oscar Wao) as a major influence on her writing, as well as Jacqueline Woodson’s 2014 verse novel Brown Girl Dreaming. Clap When You Land joins the growing genre of verse novels for young adults including The Crossover by Kwame Alexander and The One and Only Ivan by Katherine Applegate. Though verse narratives and epic poems like the Odyssey and the Epic of Gilgamesh have existed for millennia, the verse novel is distinctly modern and traces its roots to the early 1800s. A famous early example is Eugene Onegin by Alexander Pushkin, which was published initially in serial form between 1825 and 1832. Acevedo’s other young adult novels, The Poet X and With the Fire On High, also portray Dominican American culture. And Clap When You Land is one of many novels, particularly those aimed at young adults, that follow young people coming to terms with a parent’s legacy after that parent’s death. Novels that tackle this in a variety of ways include Sharon Creech’s Walk Two Moons, as well as On the Come Up by Angie Thomas and even J.K. Rowling’s Harry Potter series. Secrets and their impact also make for compelling subject matter in books for all ages, from young adult novels like to All the Boys I’ve Loved Before by Jenny Han to classics like F. Scott Fitzgerald’s The Great Gatsby. In his nonfiction work The Secret Life of Secrets, Michael Slepian researches the reasons people keep secrets, what types of secrets people most commonly keep, and secrets’ (oftentimes negative) impact on people.
Key Facts about Clap When You Land

Extra Credit for Clap When You Land

A Quick Read. While Acevedo began writing verse novels because of her own history with written poetry and spoken word, many young adult authors, like Kwame Alexander and Jason Reynolds, also point out that verse novels can be especially useful for getting reluctant readers to read. Fewer words on the page means that kids who would normally struggle to finish a book can easily and more quickly finish an entire book.

Dental Records. While Clap When You Land implies that it’s totally normal (if tragic) that officials use dental records to identify Papi’s body, identifying remains in this way has only been an option for a few centuries. The first instance is believed to have occurred during the Revolutionary War, when silversmith Paul Revere identified Dr. Joseph Warren’s body by a false tooth he’d made for the doctor. 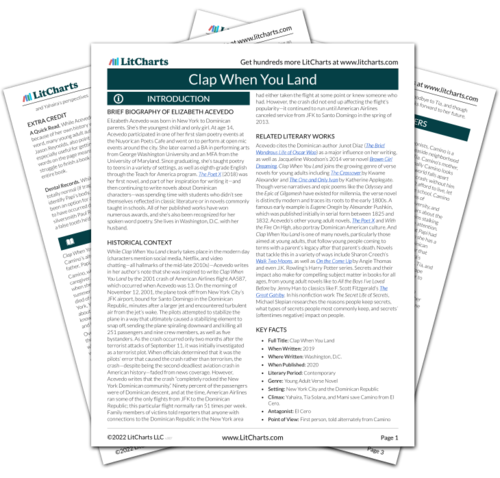 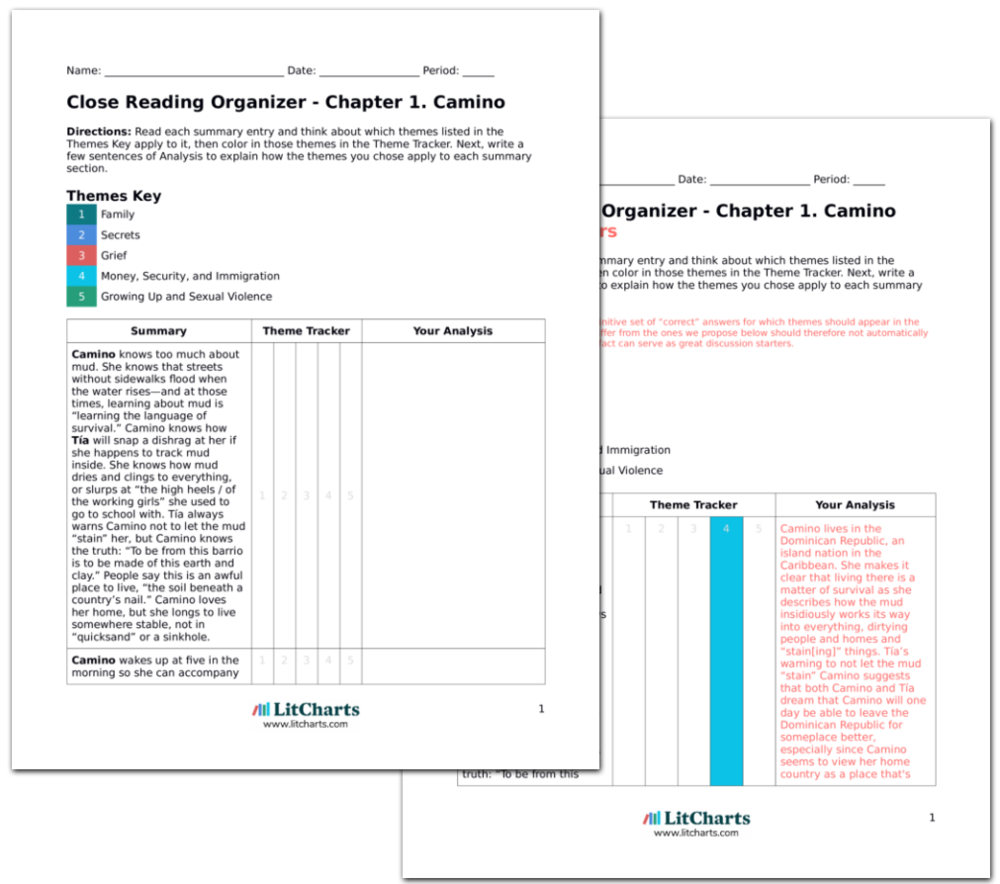