Download this LitChart! (PDF)
Teachers and parents! Struggling with distance learning? Our Teacher Edition on Common Sense can help.

Thomas Paine argues that because the American colonies have suffered oppression at the hands of Britain’s King and Parliament, Americans are justified in investigating and even rejecting Britain’s “usurping” power. He further argues that Britain has attacked “natural rights” that should be of concern to humanity as a whole, not just America.

Paine begins with comments on the nature of government, first distinguishing between society and government. He argues that “society” is a blessing, the result of human wants and united affections. Government, on the other hand, is no better than a “necessary evil” which serves to restrain human vices. In other words, government is only needed where moral virtue fails. Because the goal of government is to secure freedom for society, the most desirable form of government is the simplest one. The English constitution, by contrast, is harmfully complex and only enshrines tyranny.

Paine offers a deeper critique of monarchy and hereditary succession. He does this on the basis of a belief in human equality. Paine argues that biblical history demonstrates that monarchy is unchristian, inclined to violence, and to be rejected. Hereditary succession is even worse than kingship, because it arbitrarily imposes rulers—typically corrupt ones—on posterity for generations. It also produces monarchs who are arrogant and isolated from the needs and concerns of real people. Finally, he tallies a long list of wars and rebellions that monarchy and conflicts over succession have engendered in England alone, arguing that this further disproves the validity of the practice.

Paine turns to the heart of his argument in the section titled “The Present State of American Affairs.” He claims that his discussion will be grounded on nothing more than “common sense.” Because Britain has taken up arms, he argues, the time of hoping for reconciliation has passed, and it’s time for a new way of thinking. He argues that it’s a fallacy to claim that because America once thrived in its connection with Great Britain, that things will always remain that way—it’s like saying that a child must be fed baby food forever. Furthermore, America is made up of civil and religious refugees from all parts of Europe, not just England. Thus, America’s strong resources for trade and commerce will better serve the country diplomatically than Britain’s military protection ever could—Britain’s continued military oversight will only serve to ensnare America in foreign wars.

Paine shifts to an emotional appeal by charging his audience—ordinary Americans—with passivity and unfeeling temperaments if they fail to sympathize with the sufferings of besieged Boston. Anyone who looks at Britain’s recent behavior with natural human feelings should conclude that separation is the only healthy and just course of action. And even if reconciliation with Britain were now possible, King George III would insinuate himself as the oppressive ruler of America, ruining the country in the long run even if peace were achieved in the short run. Paine offers some suggestions for the future governance of an independent America, such as a Continental Congress and Charter and alternating between the colonies in the choice of a president. Always, the protection of property, freedom, and free exercise of religion should be paramount concerns for government.

Paine addresses some practical considerations for an independent America, such as the necessity of building a navy. He also points out certain favorable circumstances, such as America’s youth and ideal size (neither too small nor too confusedly populous and diverse) for drawing up and putting in place a new government. Until America takes the initiative to seek independence, he concludes, the necessity will only become more pressing and America’s circumstances more dire.

To the second and subsequent editions of Common Sense, Paine appends some responses to a speech of King George III which he describes as “a piece of […] villainy.” In the Appendix, he chiefly reiterates objections to America’s readiness for independence. For example, he argues that America has recently gained sufficient military experience in order to fight for independence, and that the longer the task is delayed, the harder it will be. The longer it’s delayed, the longer the risk of a mob or factional mentality setting in and distracting America from the task of establishing a sound constitution. Finally, he refutes a Quaker objection to rebellion, arguing that the Quakers should object to unprovoked British aggression as much as to American rebellion, or else their pacifist stance merely amounts to inconsistent, unwelcome meddling. 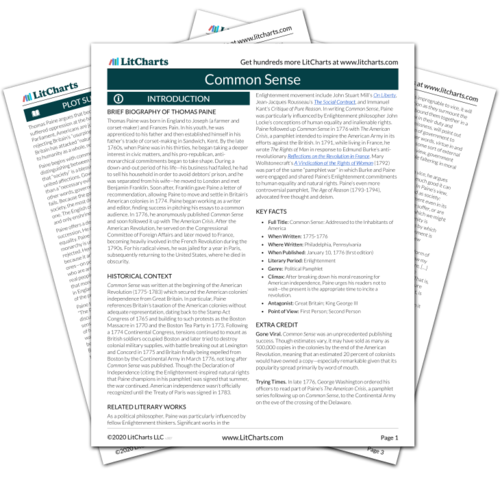 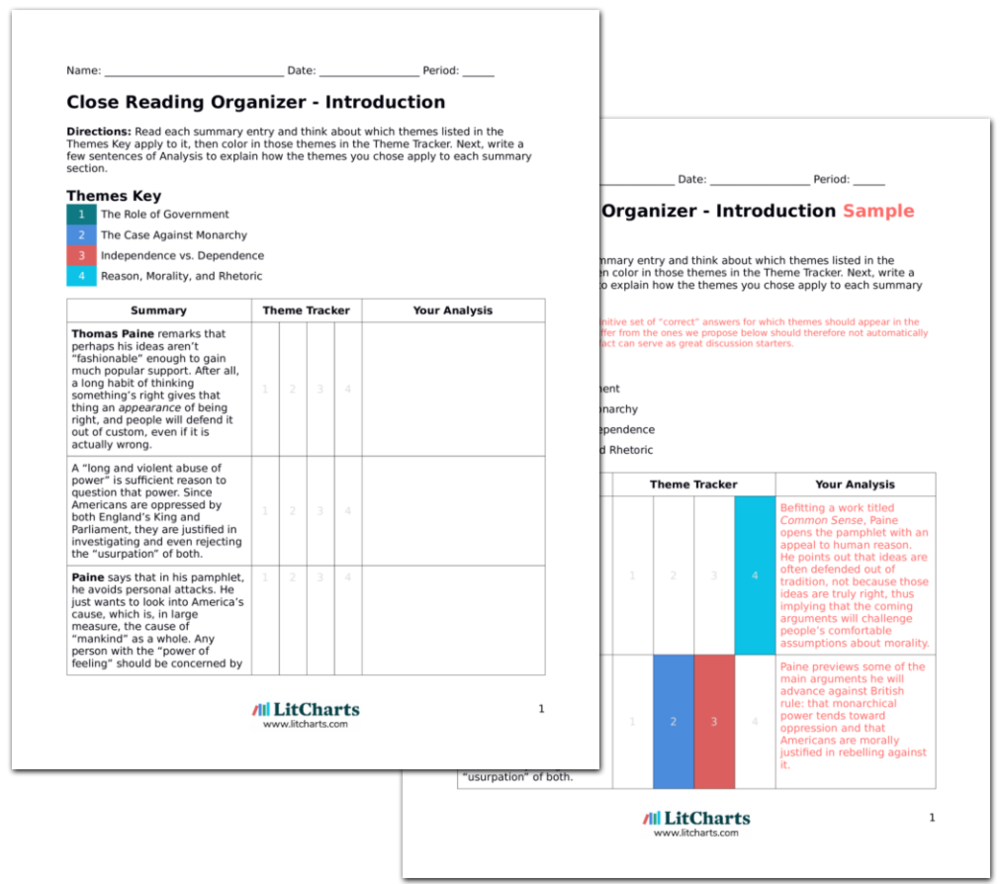