Download this LitChart! (PDF)
Teachers and parents! Struggling with distance learning? Our Teacher Edition on Concrete Rose can help.

Welcome to the LitCharts study guide on Angie Thomas's Concrete Rose. Created by the original team behind SparkNotes, LitCharts are the world's best literature guides.

A concise biography of Angie Thomas plus historical and literary context for Concrete Rose.

A quick-reference summary: Concrete Rose on a single page.

In-depth summary and analysis of every chapter of Concrete Rose. Visual theme-tracking, too.

Explanations of Concrete Rose's symbols, and tracking of where they appear.

An interactive data visualization of Concrete Rose's plot and themes.

Angela “Angie” Thomas was born and raised in Jackson, Mississippi. She was inspired to write when she was six years old: after witnessing a shootout, her mother took Thomas to the library to introduce her to the world beyond what she witnessed. She went on to receive a BFA in creative writing from Belhaven University, the first Black student to graduate from the program. Thomas's work is greatly influenced by the deaths of Trayvon Martin, Michael Brown, and Eric Garner, and the Black Lives Matter movement as a whole. And she was influenced to write Concrete Rose after seeing the Black Lives Matter movement reignite in the wake of the May 2020 death of George Floyd. Initially, these influences led to Thomas's first book The Hate U Give, which was an immediate bestseller when it was released in 2017. To write it, Thomas received a grant from the organization We Need Diverse Books in 2015. The Hate U Give has won a number of prizes and awards, including the Coretta Scott King Award and the William C. Morris Award.
Get the entire Concrete Rose LitChart as a printable PDF.
"My students can't get enough of your charts and their results have gone through the roof." -Graham S.
Download 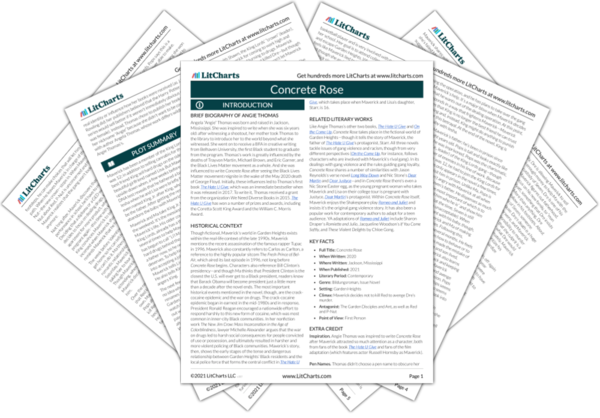 Though fictional, Maverick’s world in Garden Heights exists within the real-life context of the late 1990s. Maverick mentions the recent assassination of the famous rapper Tupac in 1996. Maverick also constantly refers to Carlos as Carlton, a reference to the highly popular sitcom The Fresh Prince of Bel-Air, which aired its last episode in 1996, not long before Concrete Rose begins. Characters also reference Bill Clinton’s presidency—and though Ma thinks that President Clinton is the closest the U.S. will ever get to a Black president, readers know that Barack Obama will become president just a little more than a decade after the novel ends. The most important historical events mentioned in the novel, though, are the crack-cocaine epidemic and the war on drugs. The crack-cocaine epidemic began in earnest in the mid-1980s and in response, President Ronald Reagan encouraged a nationwide effort to respond harshly to this new form of cocaine, which was most common in inner-city Black communities. In her nonfiction work The New Jim Crow: Mass Incarceration in the Age of Colorblindness, lawyer Michelle Alexander argues that the war on drugs led to harsh social consequences for people convicted of use or possession, and ultimately resulted in harsher and more violent policing of Black communities. Maverick’s story, then, shows the early stages of the tense and dangerous relationship between Garden Heights’ Black residents and the local police force that forms the central conflict in The Hate U Give, which takes place when Maverick and Lisa’s daughter, Starr, is 16.

Other Books Related to Concrete Rose

Like Angie Thomas’s other two books, The Hate U Give and On the Come Up, Concrete Rose takes place in the fictional world of Garden Heights—though it tells the story of Maverick, the father of The Hate U Give’s protagonist, Starr. All three novels tackle issues of gang violence and racism, though from very different perspectives (On the Come Up, for instance, follows characters who are involved with Maverick’s rival gang). In its dealings with gang violence and the rules guiding gang loyalty, Concrete Rose shares a number of similarities with Jason Reynolds’s verse novel Long Way Down and Nic Stone’s Dear Martin and Dear Justyce—and in Concrete Rose there’s even a Nic Stone Easter egg, as the young pregnant woman who takes Maverick and Lisa on their college tour is pregnant with Justyce, Dear Martin’s protagonist. Within Concrete Rose itself, Maverick enjoys the Shakespeare play Romeo and Juliet and insists it’s the original gang violence story. It has also been a popular work for contemporary authors to adapt for a teen audience. YA adaptations of Romeo and Juliet include Sharon Draper’s Romiette and Julio, Jacqueline Woodson’s If You Come Softly, and These Violent Delights by Chloe Gong.
Key Facts about Concrete Rose

Inspiration. Angie Thomas was inspired to write Concrete Rose after Maverick attracted so much attention as a character, both from fans of the book The Hate U Give and fans of the film adaptation (which features actor Russell Hornsby as Maverick).

Pen Names. Thomas didn't choose a pen name to obscure her real identity or influence how her books were received (as J.K. Rowling did; her publishers believed that the Harry Potter series would sell better if it weren't immediately obvious she was female). Instead, Thomas chose to publish her books under her nickname “Angie” because she didn't want to be confused with author Angela Thomas, whose work differs wildly from Angie Thomas's. 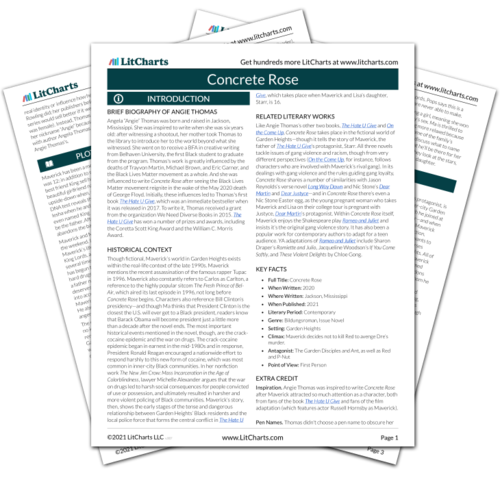 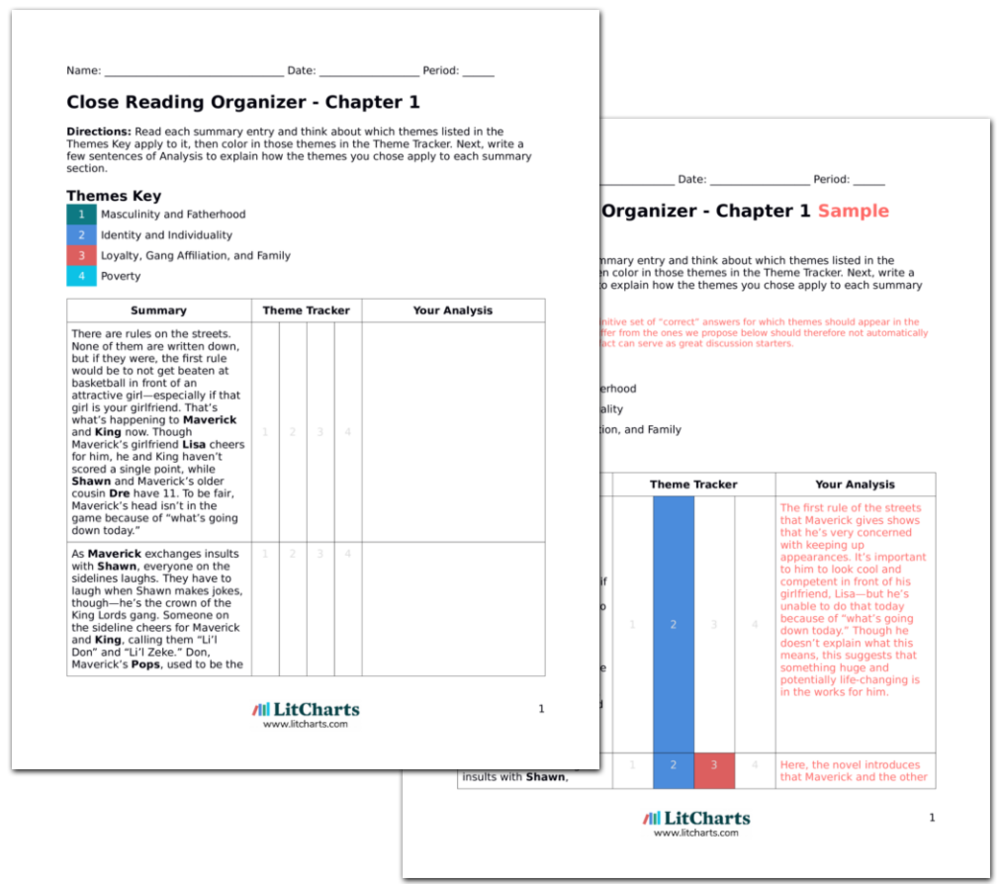