Download this LitChart! (PDF)
Teachers and parents! Struggling with distance learning? Our Teacher Edition on Cross-Country can help.

Welcome to the LitCharts study guide on Cate Kennedy's Cross-Country. Created by the original team behind SparkNotes, LitCharts are the world's best literature guides.

A concise biography of Cate Kennedy plus historical and literary context for Cross-Country.

A quick-reference summary: Cross-Country on a single page.

In-depth summary and analysis of every of Cross-Country. Visual theme-tracking, too.

Explanations of Cross-Country's symbols, and tracking of where they appear.

An interactive data visualization of Cross-Country's plot and themes.

Born in England to Australian parents, Cate Kennedy moved back to Australia and spent her childhood living across many parts of the country as her father travelled for his job in the Air Force. A graduate of the University of Canberra and Australian National University, Kennedy has taught creative writing at the University of Melbourne and several other schools in Australia. Besides teaching, Kennedy’s employment record is quite varied, including working as a customs worker, tutor, and waitress. Well-known as a short-story writer, Cate Kennedy is also a respected writer in other genres such as poetry, memoir, and nonfiction.  She has won numerous awards; impressively, she was shortlisted for the Australian Literary Gold Medal for her first novel, The World Beneath. Currently, Cate Kennedy resides in Victoria, Australia.
Get the entire Cross-Country LitChart as a printable PDF.
"My students can't get enough of your charts and their results have gone through the roof." -Graham S.
Download 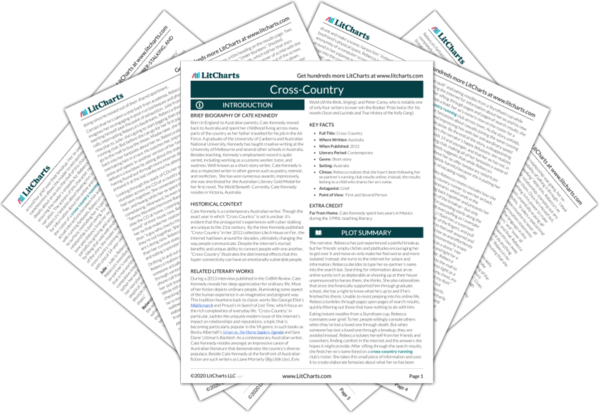 Cate Kennedy is a contemporary Australian writer. Though the exact year in which “Cross-Country” is set is unclear, it’s evident that the protagonist’s experiences with cyber stalking are unique to the 21st century.  By the time Kennedy published “Cross-Country” in her 2012 collection Like A House on Fire , the internet had been around for decades, ultimately changing the way people communicate. Despite the internet’s myriad benefits and unique ability to connect people with one another, “Cross-Country” illustrates the detrimental effects that this hyper-connectivity can have on emotionally vulnerable people.

Other Books Related to Cross-Country

During a 2013 interview published in the Griffith Review, Cate Kennedy reveals her deep appreciation for ordinary life. Most of her fiction depicts ordinary people, illuminating some aspect of the human experience in an imaginative and poignant way. This tradition hearkens back to classic works like George Eliot’s Middlemarch and Proust’s In Search of Lost Time, which focus on the rich complexities of everyday life. “Cross-Country,” in particular, tackles the uniquely modern issue of the internet’s impact on relationships and reputations, a topic that is becoming particularly popular in the YA genre, in such books as Becky Albertalli's Simon vs. the Homo Sapiens Agenda and Sara Darer Littman's Backlash. As a contemporary Australian writer, Cate Kennedy resides amongst an impressive canon of Australian literature that demonstrates the country’s diverse populace. Beside Cate Kennedy at the forefront of Australian fiction are such writers as Liane Moriarty (Big Little Lies), Evie Wyld (All the Birds, Singing), and Peter Carey, who is notably one of only four writers to ever win the Booker Prize twice (for his novels Oscar and Lucinda and True History of the Kelly Gang).
Key Facts about Cross-Country 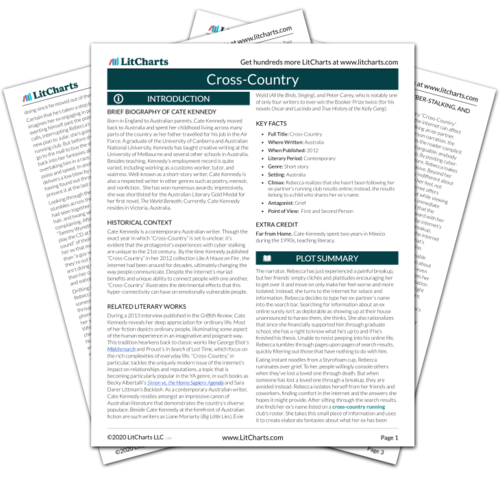 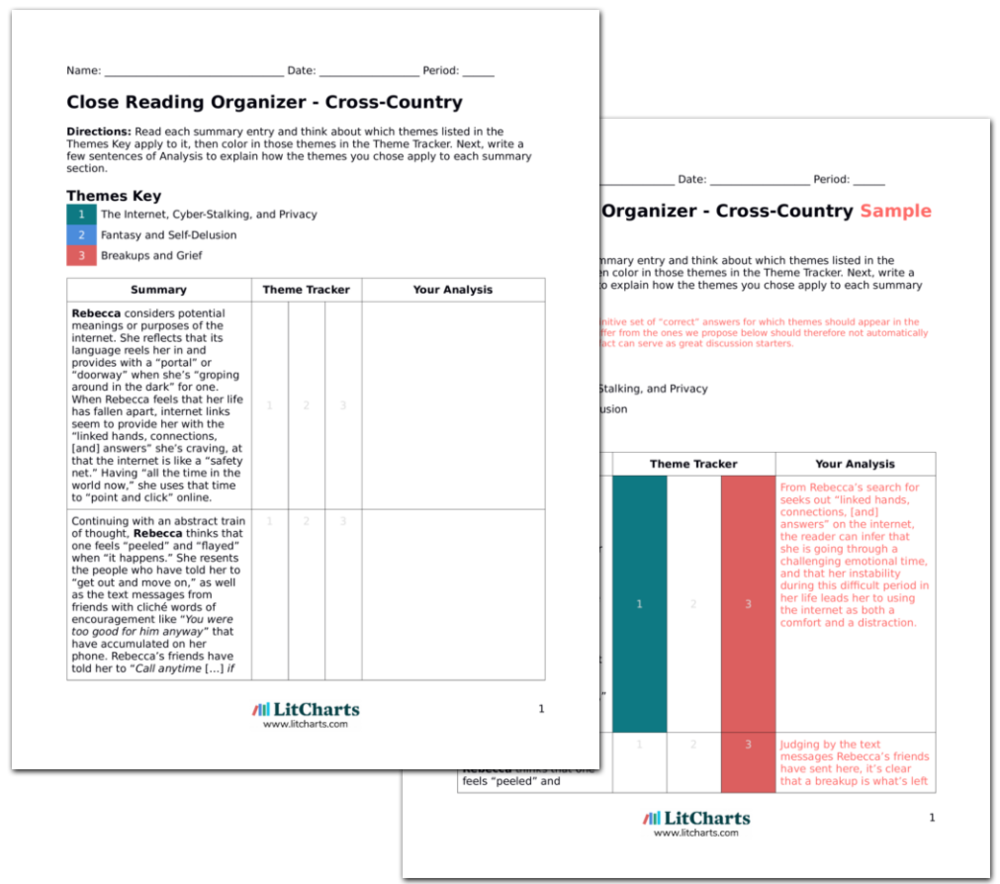