Download this LitChart! (PDF)
Teachers and parents! Struggling with distance learning? Our Teacher Edition on David and Goliath can help.

Welcome to the LitCharts study guide on Malcolm Gladwell's David and Goliath. Created by the original team behind SparkNotes, LitCharts are the world's best literature guides.

A concise biography of Malcolm Gladwell plus historical and literary context for David and Goliath.

A quick-reference summary: David and Goliath on a single page.

In-depth summary and analysis of every chapter of David and Goliath. Visual theme-tracking, too.

Explanations, analysis, and visualizations of David and Goliath's themes.

Description, analysis, and timelines for David and Goliath's characters.

Description, analysis, and timelines for David and Goliath's terms.

Explanations of David and Goliath's symbols, and tracking of where they appear.

An interactive data visualization of David and Goliath's plot and themes.

Malcolm Gladwell was born in England and grew up in Canada. He studied history at the University of Toronto and afterward went to work for the conservative magazine The American Spectator in Indiana. By the late 1980s, Gladwell had risen to begin covering science and business news for the Washington Post, and gradually found that he excelled at simplifying complex information for a lay-audience. Gladwell began writing for The New Yorker in 1996 and has stayed there ever since. He rose to success after composing a New Yorker article called “The Tipping Point,” the basis for his first book. After publishing The Tipping Point in 2000, Gladwell became a popular guest speaker for businesses, think tanks, and universities. Since 2000, he’s published four successful books, including Blink, Outliers, David and Goliath, and Talking to Strangers. He continues to write for The New Yorker and appear as a guest speaker around the world.
Get the entire David and Goliath LitChart as a printable PDF.
"My students can't get enough of your charts and their results have gone through the roof." -Graham S.
Download 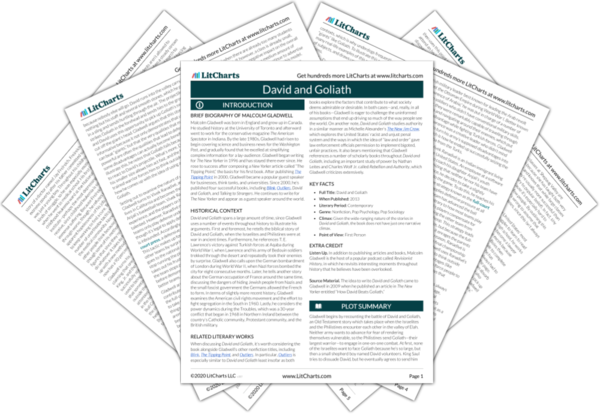 Historical Context of David and Goliath

David and Goliath spans a large amount of time, since Gladwell uses a number of events throughout history to illustrate his arguments. First and foremost, he retells the biblical story of David and Goliath, when the Israelites and Philistines were at war in ancient times. Furthermore, he references T. E. Lawrence’s victory against Turkish forces at Aqaba during World War I, when Lawrence and his army of Bedouin soldiers trekked through the desert and repeatedly took their enemies by surprise. Gladwell also calls upon the German bombardment of London during World War II, when Nazi forces bombed the city for eight consecutive months. Later, he tells another story about the German occupation of France around the same time, discussing the dangers of hiding Jewish people from Nazis and the small fascist government the Germans allowed the French to form. In terms of slightly more recent history, Gladwell examines the American civil rights movement and the effort to fight segregation in the South in 1960. Lastly, he considers the power dynamics during the Troubles, which was a 30-year conflict that began in 1968 in Northern Ireland between the country’s Catholic community, Protestant community, and the British military.

Other Books Related to David and Goliath

When discussing David and Goliath, it’s worth considering the book alongside Gladwell’s other nonfiction titles, including Blink, The Tipping Point, and Outliers. In particular, Outliers is especially similar to David and Goliath least insofar as both books explore the factors that contribute to what society deems admirable or desirable. In both cases—and, really, in all of his books—Gladwell is eager to challenge the uninformed assumptions that end up driving so much of the way people see the world. On another note, David and Goliath studies authority in a similar manner as Michelle Alexander’s The New Jim Crow, which explores the United States’ racist and unjust penal system and the ways in which the idea of “law and order” gave law enforcement officials permission to implement bigoted, unfair practices. It also bears mentioning that Gladwell references a number of scholarly books throughout David and Goliath, including an important study of power by Nathan Leites and Charles Wolf Jr. called Rebellion and Authority, which Gladwell criticizes extensively.
Key Facts about David and Goliath

Extra Credit for David and Goliath

Listen Up. In addition to publishing articles and books, Malcolm Gladwell is the host of a popular podcast called Revisionist History, in which he revisits interesting moments throughout history that he believes have been overlooked.

Source Material. The idea to write David and Goliath came to Gladwell in 2009 when he published an article in The New Yorker entitled “How David Beats Goliath.” 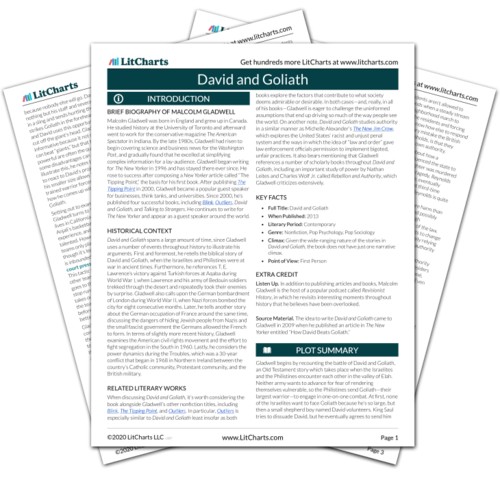 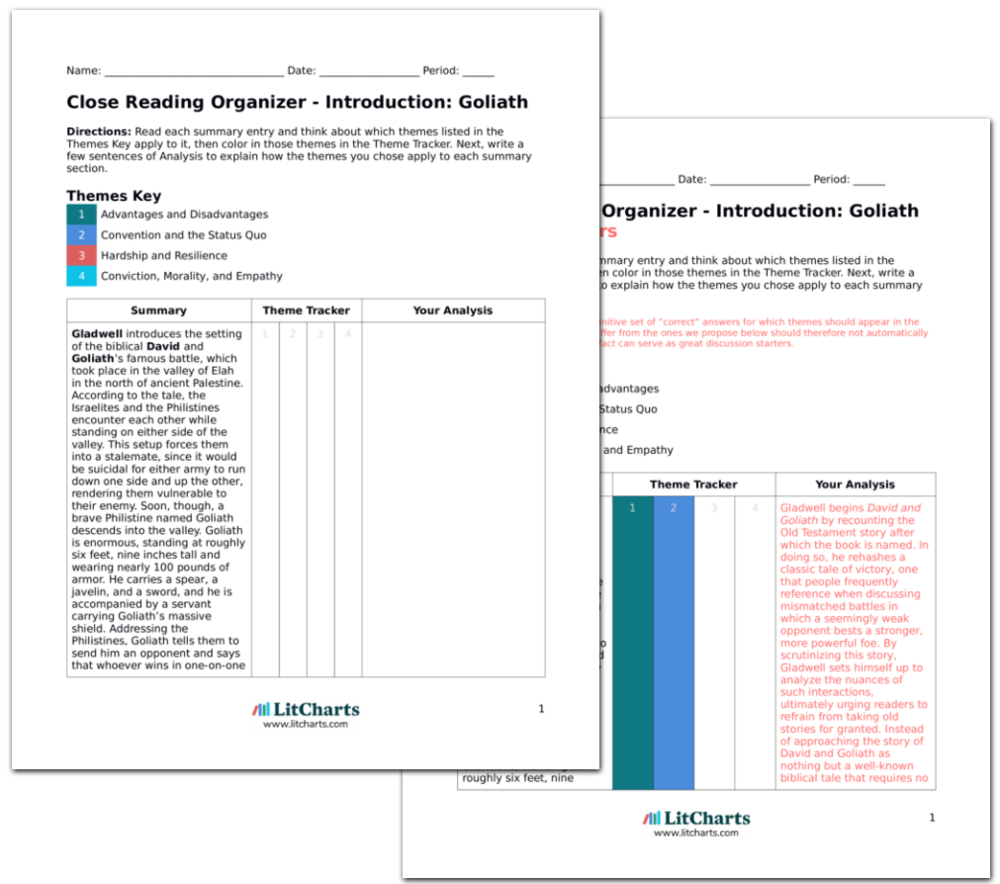