Download this LitChart! (PDF)
Teachers and parents! Struggling with distance learning? Our Teacher Edition on Dawn can help.

Welcome to the LitCharts study guide on Elie Wiesel's Dawn. Created by the original team behind SparkNotes, LitCharts are the world's best literature guides.

A concise biography of Elie Wiesel plus historical and literary context for Dawn.

A quick-reference summary: Dawn on a single page.

In-depth summary and analysis of every chapter of Dawn. Visual theme-tracking, too.

Explanations of Dawn's symbols, and tracking of where they appear.

An interactive data visualization of Dawn's plot and themes.

Elie Wiesel was born into a multilingual Hasidic Jewish family in Romania’s Carpathian Mountains. From a young age, he was encouraged to study Hebrew, religion, and literature. In 1944, 15-year-old Wiesel was deported to the Auschwitz concentration camp along with his family and the rest of his town’s Jewish population. His mother and younger sister, Tzipora, were killed upon their arrival. After Wiesel and his father were transferred to the Buchenwald concentration camp, his father died, but Wiesel himself survived until the U.S. Army liberated the camp in April, 1945. After World War II, he spent time in France, studying at the Sorbonne and writing for French and Israeli publications. However, it wasn’t until 10 years later, on the encouragement of close friend and Nobel laureate François Mauriac, that he began writing about his Holocaust experiences, first publishing Night in 1955. Around this time, he moved to the United States, married a woman named Marion Rose, and wrote extensively—he penned a total of 57 books, including novels, nonfiction, and memoirs. He taught in the philosophy and religion departments at Boston University and held visiting appointments at numerous other institutions. Throughout his life, he campaigned for human rights around the world, for which he was awarded the Nobel Peace Prize in 1986. He was also involved with establishing the Holocaust Memorial Museum in Washington, D.C.
Get the entire Dawn LitChart as a printable PDF.
"My students can't get enough of your charts and their results have gone through the roof." -Graham S.
Download 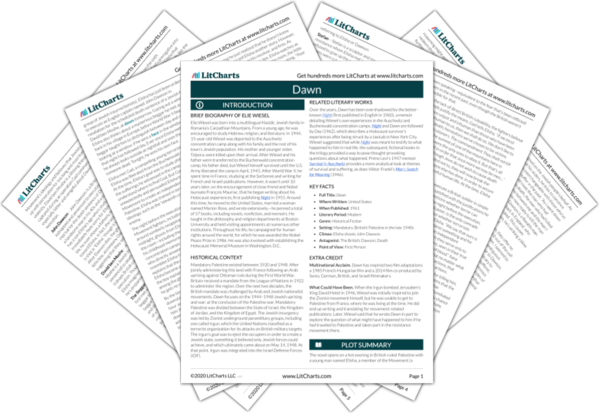 Mandatory Palestine existed between 1920 and 1948. After jointly administering this land with France following an Arab uprising against Ottoman rule during the First World War, Britain received a mandate from the League of Nations in 1922 to administer the region. Over the next two decades, the British mandate was challenged by Arab and Jewish nationalist movements. Dawn focuses on the 1944–1948 Jewish uprising and war; at the conclusion of the Palestine war, Mandatory Palestine was divided between the State of Israel, the Kingdom of Jordan, and the Kingdom of Egypt. The Jewish insurgency was led by Zionist underground paramilitary groups, including one called Irgun, which the United Nations classified as a terrorist organization for its attacks on British military targets. The Irgun’s goal was to eject the occupiers in order to create a Jewish state, something it believed only Jewish forces could achieve, and which ultimately came about on May 14, 1948. At that point, Irgun was integrated into the Israel Defense Forces (IDF).

Other Books Related to Dawn

Over the years, Dawn has been overshadowed by the better-known Night (first published in English in 1960), a memoir detailing Wiesel’s own experiences in the Auschwitz and Buchenwald concentration camps. Night and Dawn are followed by Day (1962), which describes a Holocaust survivor’s experiences after being struck by a taxicab in New York City. Wiesel suggested that while Night was meant to testify to what happened to him in real life, the subsequent, fictional books in the trilogy provided a way to pose thought-provoking questions about what happened. Primo Levi’s 1947 memoir Survival in Auschwitz provides a more analytical look at themes of survival and suffering, as does Viktor Frankl’s Man’s Search for Meaning (1946).
Key Facts about Dawn

What Could Have Been. When the Irgun bombed Jerusalem’s King David Hotel in 1946, Wiesel was initially inspired to join the Zionist movement himself, but he was unable to get to Palestine from France, where he was living at the time. He did end up writing and translating for movement-related publications. Later, Wiesel said that he wrote Dawn in part to explore the question of what might have happened to him if he had traveled to Palestine and taken part in the resistance movement there. 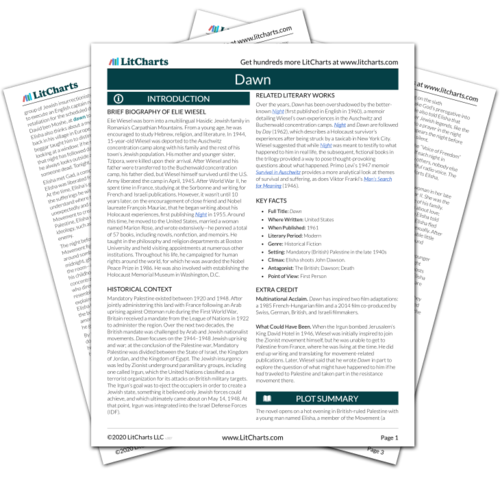 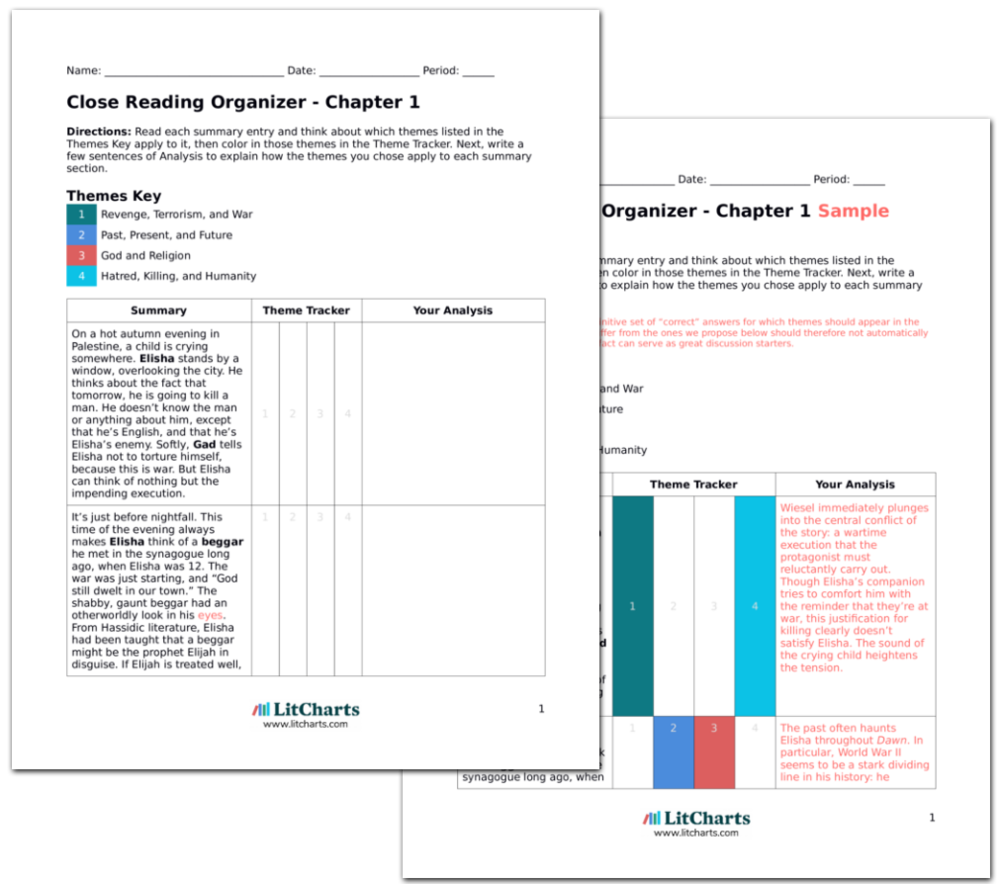