Download this LitChart! (PDF)
Teachers and parents! Struggling with distance learning? Our Teacher Edition on Dead Men’s Path can help.

Welcome to the LitCharts study guide on Chinua Achebe's Dead Men’s Path. Created by the original team behind SparkNotes, LitCharts are the world's best literature guides.

A concise biography of Chinua Achebe plus historical and literary context for Dead Men’s Path.

A quick-reference summary: Dead Men’s Path on a single page.

In-depth summary and analysis of every of Dead Men’s Path. Visual theme-tracking, too.

Explanations of Dead Men’s Path's symbols, and tracking of where they appear.

Chinua Achebe was born on November 16, 1930 in Ogidi, Nigeria. The fifth child of Isaiah Okafor Achebe, a Christian catechism teacher, and Janet Ileogbunam, he was born into a privileged and educated family and christened Albert as a homage to Queen Victoria’s husband, Prince Albert. Nevertheless, Chinua Achebe’s first language was Igbo, and he did not start learning English until about the age of eight, despite the fact that Nigeria was still a British colony and would be until 1960. He grew up listening to Igbo language and traditional stories. This allowed him to develop a strong affinity for Igbo culture, which he continued to appreciate as he learned and became fluent in English. Though he excelled in his secondary studies and matriculated into University College of Ibadan to study medicine, he ultimately switched to a liberal arts curriculum and studied history, religion, and English instead. Around that time, Achebe was stirred up by the growing nationalist sentiment and calls for independence, so he began to go by his Igbo name “Chinua,” a name whose long form “Chinualumogo” means “My spirit come fight for me.” It was also in college where he began to publish stories like “Dead Men’s Path,” which explores the community upheavals and cultural tensions that occur as a result of the colonial presence of foreign powers, like the British Empire, on African societies. Although his earlier works are less known than his 1958 classic, the acclaimed novel Things Fall Apart, many of the themes are similar and deal with colonialism, Christianity, and culture. As his writing career took off, he worked as a professor in schools in Nigeria and the United States. He published his last novel in 1987, three years before a car crash in Lagos left him paralyzed from the waist down. Achebe died in 2013 in Boston, Massachusetts.
Get the entire Dead Men’s Path LitChart as a printable PDF.
"My students can't get enough of your charts and their results have gone through the roof." -Graham S.
Download 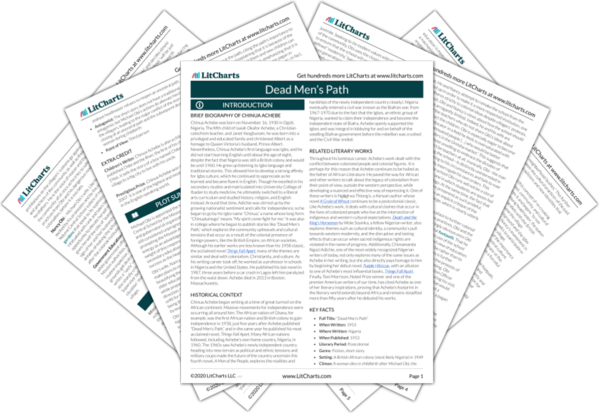 Chinua Achebe began writing at a time of great turmoil on the African continent. Massive movements for independence were occurring all around him. The African nation of Ghana, for example, was the first African nation and British colony to gain independence in 1958, just five years after Achebe published “Dead Men’s Path,” and in the same year he published his most acclaimed novel, Things Fall Apart. Many African nations followed, including Achebe’s own home country, Nigeria, in 1960. The 1960s saw Achebe’s newly independent country heading into new terrain as political and ethnic tensions and military coups made the future of the country uncertain (his fourth novel, A Man of the People, explores the realities and hardships of the newly independent country closely). Nigeria eventually entered a civil war, known as the Biafran war, from 1967-1970 due to the fact that the Igbos, an ethnic group of Nigeria, wanted to claim their independence and become the independent state of Biafra. Achebe openly supported the Igbos and was integral in lobbying for and on behalf of the seedling Biafran government before the rebellion was crushed and the Civil War ended.

Throughout his luminous career, Achebe’s work dealt with the conflict between colonized people and colonial figures. It is perhaps for this reason that Achebe continues to be hailed as the father of African Literature. He paved the way for African and other writers to talk about the legacy of colonialism from their point of view, outside the western perspective, while developing a nuanced and effective way of expressing it. One of these writers is Ngūgī wa Thiong’o, a Kenyan author whose novel A Grain of Wheat continues to be a postcolonial classic. Like Achebe’s work, it deals with cultural clashes that occur in the lives of colonized people who live at the intersection of indigenous and western cultural expectations. Death and the King’s Horseman by Wole Soyinka, a fellow Nigerian writer, also explores themes such as cultural identity, a community’s pull towards western modernity, and the disruptive and lasting effects that can occur when sacred indigenous rights are violated in the name of progress. Additionally, Chimamanda Ngozi Adichie, one of the most widely recognized Nigerian writers of today, not only explores many of the same issues as Achebe in her writing, but she also directly pays homage to him by beginning her debut novel, Purple Hibiscus, with an allusion to one of Achebe’s most influential books, Things Fall Apart. Finally, Toni Morrison, Nobel Prize winner and one of the premier American writers of our time, has cited Achebe as one of her literary inspirations, proving that Achebe’s footprint in the literary world extends beyond Africa and remains steadfast more than fifty years after he debuted his works.
Key Facts about Dead Men’s Path

Children’s Writer. Chinua Achebe is also a children’s writer. He published Chike and the River, the first of his children’s stories in 1966. It tells the story of a boy named Chike who moves from a village to a big city to live with his uncle.

Prestigious Prize. Chinua Achebe won the Man Booker Prize in 2007. It is one of the highest and most renowned literary prizes in the English-speaking world. 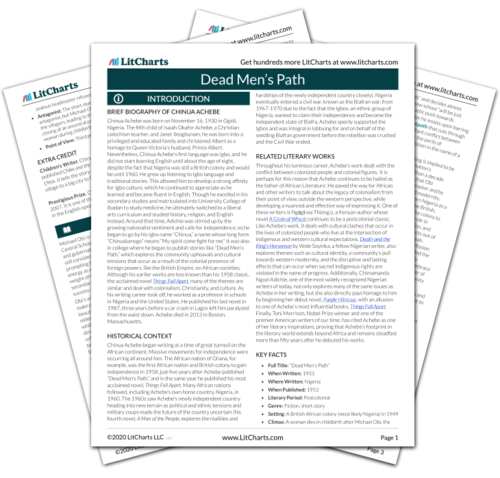 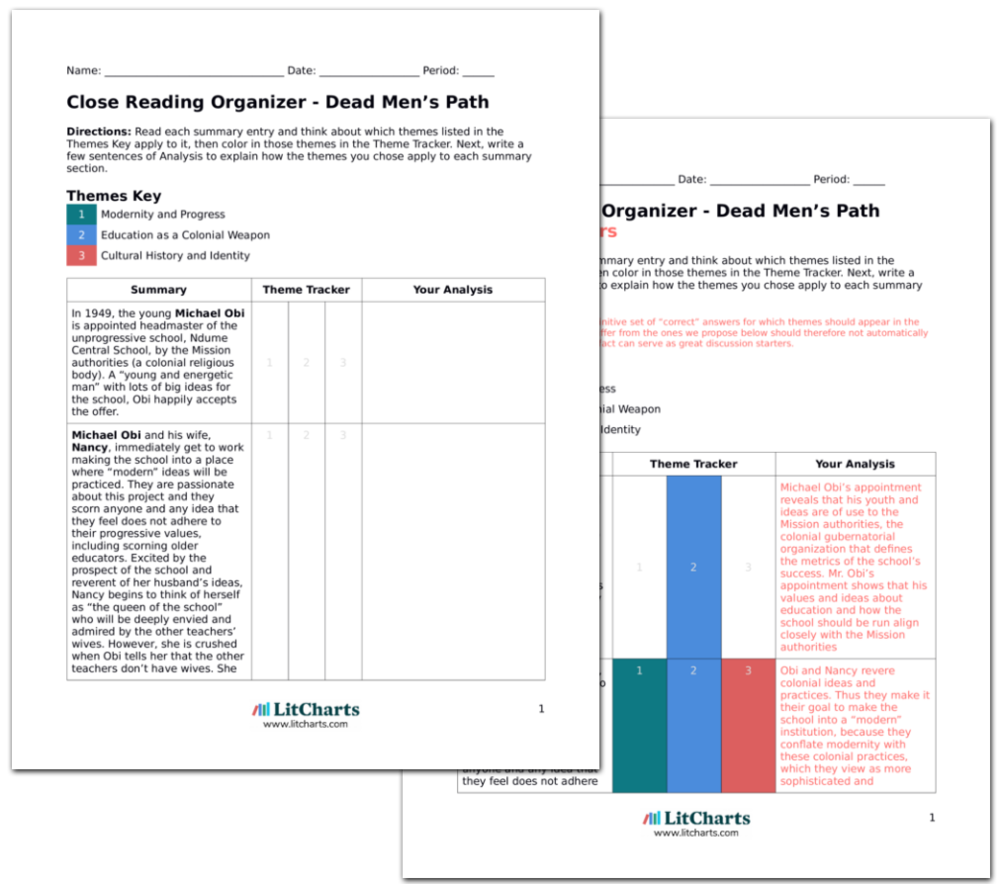