Download this LitChart! (PDF)
Teachers and parents! Struggling with distance learning? Our Teacher Edition on Dear America can help.

Welcome to the LitCharts study guide on Jose Antonio Vargas's Dear America. Created by the original team behind SparkNotes, LitCharts are the world's best literature guides.

A concise biography of Jose Antonio Vargas plus historical and literary context for Dear America.

A quick-reference summary: Dear America on a single page.

In-depth summary and analysis of every chapter of Dear America. Visual theme-tracking, too.

Explanations of Dear America's symbols, and tracking of where they appear.

An interactive data visualization of Dear America's plot and themes.

Journalist, activist, and filmmaker Jose Antonio Vargas is frequently called the “most famous undocumented immigrant in America.” As he explains in Dear America, he was born in the Philippines and moved to California to live with his U.S. citizen grandparents at age 12. Four years later, when he tried to obtain a driver’s license, he learned that he was undocumented. Fortunately, a network of generous, caring adults helped him find a scholarship to attend San Francisco State University and then start a career in journalism. After internships at the San Francisco Chronicle, the Philadelphia Daily News, and The Washington Post, Vargas went on to a full-time position at the Style section of the Post. He covered topics ranging from video games to the HIV/AIDS epidemic and the 2007 Virginia Tech shooting. In fact, he turned his HIV/AIDS coverage into a 2010 documentary, The Other City, and his team won a Pulitzer Prize for Breaking News Reporting for their work on the Virginia Tech shooting. Vargas went on to cover the 2008 presidential campaign, with a particular focus on technology and social media. In 2009, he joined The Huffington Post, where he edited the paper’s technology and college sections. After years of silence on the subject, Vargas publicly revealed his immigration status in a 2011 essay for The New York Times Magazine. In the process, he became the most visible undocumented immigrant activist in the United States. The same year, Vargas also founded the nonprofit Define American, which spearheaded the successful push to replace the term “illegal” with “undocumented” in mainstream news. As he recounts in Dear America, he also wrote a major Time magazine cover story about undocumented immigrants in 2012, testified before the Senate Judiciary Committee in 2013, and was arrested by the Border Patrol in a high-profile case in McAllen, Texas in 2014. In addition to writing this book, he has spent the 2010s directing Define American and making films, including the film Documented about his own life and the documentary White People for MTV. As of 2021, he is currently working on his next book, White Is Not a Country, which is scheduled for publication in 2023.
Get the entire Dear America LitChart as a printable PDF.
"My students can't get enough of your charts and their results have gone through the roof." -Graham S.
Download 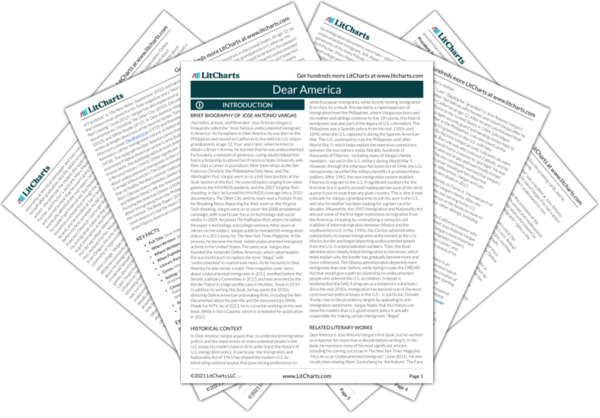 In Dear America, Vargas argues that, to understand immigration politics and the experiences of undocumented people in the U.S. today, his readers have to first understand the history of U.S. immigration policy. In particular, the Immigration and Nationality Act of 1965 has shaped the modern U.S. by eliminating national quotas that gave strong preferences to white European immigrants, while strictly limiting immigration from Asia. As a result, this law led to a rapid expansion of immigration from the Philippines, where Vargas was born and his mother and siblings continue to live. Of course, this flow of immigrants was also part of the legacy of U.S. colonialism. The Philippines was a Spanish colony from the mid-1500s until 1898, when the U.S. captured it during the Spanish-American War. The U.S. continued to rule the Philippines until after World War II, which helps explain the extensive connections between the two nations today. Notably, hundreds of thousands of Filipinos—including many of Vargas’s family members—served in the U.S. military during World War II. However, through the infamous Recission Act of 1946, the U.S. retroactively cancelled the military benefits it promised these soldiers. After 1965, the new immigration system enabled Filipinos to migrate to the U.S. in significant numbers for the first time, but it quickly proved inadequate because of the strict quotas it put on visas from any given country. This is why it took a decade for Vargas’s grandparents to join his aunt in the U.S., and why his mother has been waiting for a green card for decades. Meanwhile, the 1965 Immigration and Nationality Act also put some of the first legal restrictions on migration from the Americas, including by criminalizing a centuries-old tradition of informal migration between Mexico and the southwestern U.S. In the 1990s, the Clinton administration substantially increased immigration enforcement at the U.S.-Mexico border and began deporting undocumented people from the U.S. in unprecedented numbers. Then, the Bush administration closely linked immigration to terrorism, which helps explain why the border has gradually become more and more militarized. The Obama administration deported more immigrants than ever before, while failing to pass the DREAM Act that would give a path to citizenship to undocumented people who entered the U.S. as children. (Instead, it implemented the DACA program as a temporary substitute.) Since the mid-2010s, immigration has become one of the most controversial political issues in the U.S.—in particular, Donald Trump rose to the presidency largely by appealing to anti-immigration sentiments. Vargas hopes that this history can show his readers that U.S. government policy is actually responsible for making certain immigrants “illegal.”

Other Books Related to Dear America

Dear America is Jose Antonio Vargas’s first book, but he worked as a reporter for more than a decade before writing it. In the book, he mentions many of his most significant articles, including his coming out essay in The New York Times Magazine, “My Life as an Undocumented Immigrant” (June 2011). He also recalls interviewing Mark Zuckerberg for the feature “The Face of Facebook” in The New Yorker (September 2010) and taking the famous cover photo for his Time magazine story “Not Legal Not Leaving” (June 2012). Vargas has also made several documentaries, including The Other City (2010), Documented (2013), and White People (2015). In Dear America, Vargas also writes at length about two of his favorite books: Toni Morrison’s novel The Bluest Eye (1970) and President John F. Kennedy’s call for immigration reform, A Nation of Immigrants (1958). The epigraph to Dear America comes from the prominent Filipino American writer Carlos Bulosan’s best-known work, the autobiographical novel America Is in the Heart: A Personal History (1943). Other significant 21st-century books about undocumented immigrants in the U.S. include Karla Cornejo Villavicencio’s The Undocumented Americans (2020), Dan-el Padilla Peralta’s memoir Undocumented: A Dominican Boy’s Odyssey from a Homeless Shelter to the Ivy League (2015), and William Pérez’s We Are Americans: Undocumented Students Pursuing the American Dream (2009). Grace Talusan writes about immigrating from the Philippines to the United States in her memoir The Body Papers (2019), while Elaine Castillo’s novel America Is Not the Heart (2018) is set in the 1990s Bay Area Filipino American community where Vargas grew up.
Key Facts about Dear America

Back to Where It All Started. Mountain View, California—where Vargas spent his first years in the U.S.—named its newest elementary school after him in recognition of his achievements. When he first heard the news, Vargas thought it was a joke, but it wasn’t. Jose Antonio Vargas Elementary School officially opened on August 19, 2019. 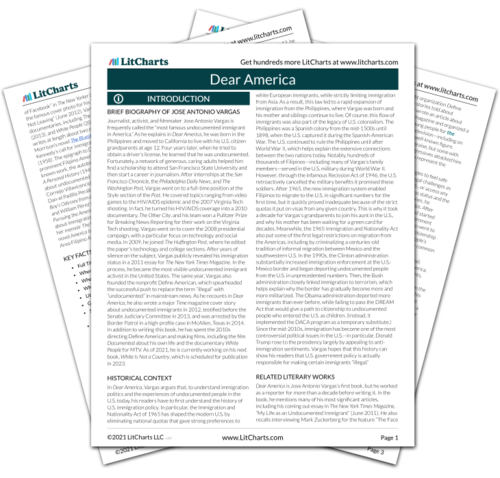 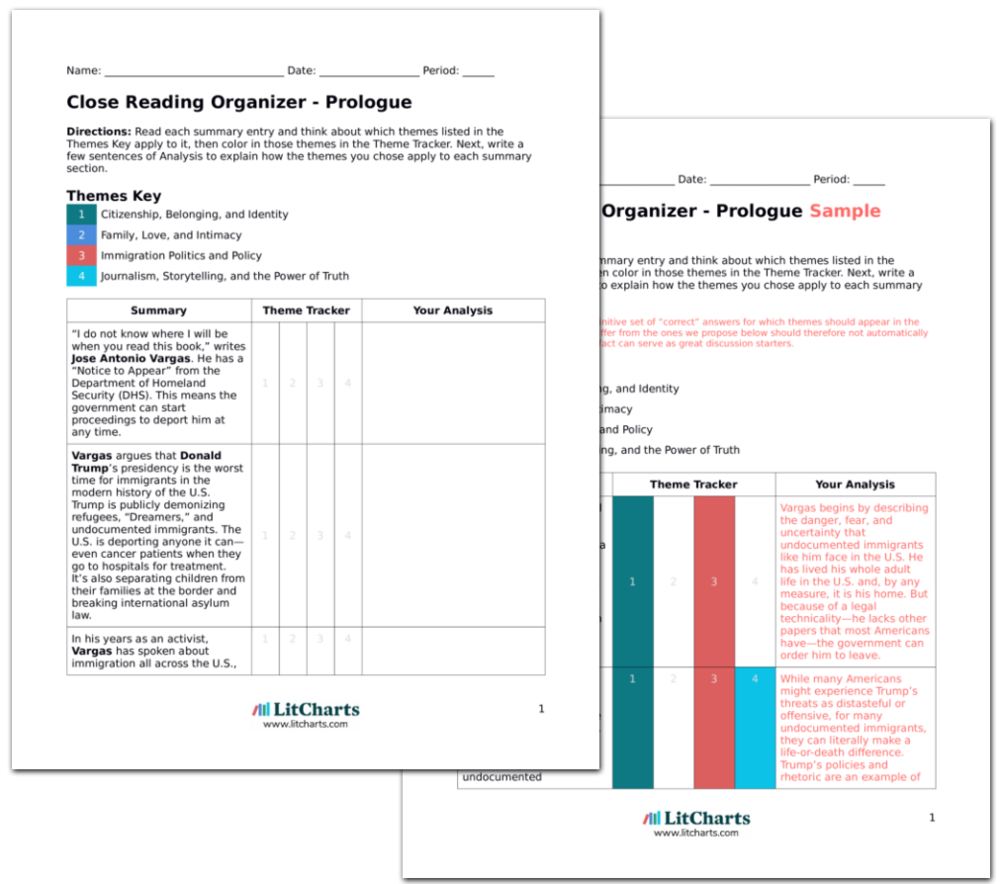