The action of Death and the King's Horseman begins a month after the king's death. Per Yoruba religious tradition, Elesin, the titular horseman (a title that signifies that he's in service to the king and shares many of the same rights and perks, but without the same responsibilities), must commit ritual suicide so that he can accompany the king to the afterlife. Things become complicated, however, when the Englishman Simon Pilkings, the local district officer, discovers that Elesin intends to commit suicide while the prince of England is visiting. Through Pilkings's attempts to stop Elesin from committing suicide, the play begins to explore the function and the cultural significance of death, both for the Yoruba people and for the English. Ultimately, the play makes it very clear that death is something different for every culture—and that interrupting one culture's way of thinking about the relationship between life and death can have disastrous consequences.

For Elesin, the past month has been a time of transition. The death of the king a month before means that Elesin has had thirty days to prepare for his own journey toward death and has therefore been existing in a liminal, transitional state. Despite this—and despite Elesin's assurance to both his praise-singer and Iyaloja, the mother of the market, that he plans to follow through with tradition and die—the way that Elesin behaves and is described in the stage notes suggests that he's more connected to life than he might think. This, Soyinka suggests in his introduction, is the true conflict of the play: that Elesin is too entrenched in the land of the living to successfully cross over to the land of the dead to join his king.

The most significant way that Soyinka demonstrates how connected Elesin is to life is through his desire for material and carnal pleasures. Elesin teases the women in the marketplace, which results in them dressing him in colorful, elaborate clothing, something that Elesin clearly takes great pleasure in. He also insists on marrying in the hours before his death for no other reason than that the bride, the young woman he sees walking through the market, is extremely beautiful and he wants to have sex with her. Both Iyaloja and the praise-singer suggest that this is a problem, whatever Elesin has to say on the matter. Iyaloja cautions Elesin to make sure that his "seed doesn't attract a curse"—in other words, she tries to warn Elesin that participating in the marriage ceremonies so close to his death might tie him to the world of the living to the point where dying could become difficult when the time comes. Ultimately, she's right to be concerned: Elesin falters in his attempt to die and later, halfheartedly blames his new bride for tempting him. With this, Elesin admits that he did love life too much, even as he regrets that he wasn't able to end it.

Despite Elesin's struggles to end his life, the way that the Yoruba characters speak about death casts death as something not only inevitable, but honorable—especially when, as was supposed to be Elesin's case, a person has the ability to prepare for and embrace their coming death. This also suggests that life can be more fulfilling when a person lives knowing full well that death is on its way. This contrasts dramatically with the way that the English characters think of life and death. Pilkings believes in a Christian ideal of the sanctity of all life; thus, Elesin's suicide is something blasphemous and unthinkable, rather than a way for Elesin to exercise agency over how and when his spirit crosses over to the land of the dead. Interestingly, Elesin's love of life and the way he goes about enjoying his life suggest that even if he does still adhere to Yoruba beliefs dictating that he must die, he might have more in common with Pilkings than Elesin is comfortable admitting. Indeed, even Pilkings brings up a Yoruba proverb suggesting that nobody dies entirely willingly, no matter their station in life or their belief system. With this, Pilkings suggests that Elesin's hesitation is normal and understandable even within the context of his own belief system, and even if it has disastrous consequences.

As appalling as Pilkings finds Elesin's ritual suicide attempt and as catastrophic as Elesin's failure is for Iyaloja and the Yoruba people, more horrifying for everyone—Pilkings, Elesin, and the reader/audience alike—is Elesin's successful suicide behind bars after he sees the body of his oldest son, Olunde, who took Elesin's place in the spiritual world as the king's horseman when Elesin failed to die. Being refused his original, planned death robs Elesin of all dignity and power. While dying as planned would've meant that he'd be honored by both the living and the dead, not being able to die dishonors Elesin in the eyes of everyone and makes it so that the tradition of the king's horseman cannot continue in the futures of the living, given that Olunde (who would've been the next horseman) is also dead. Dishonored in both life and death, Elesin kills himself with the chains that bind him, and Iyaloja tells Pilkings that Pilkings is the one to blame, as he "usurp[s] the vestments of our dead, yet believe[s] that the stain of death will not cling to [him]." With this, Iyaloja suggests that the true crime committed by both Elesin and Pilkings is not accepting the inevitability of death and not allowing others to greet death on their own terms.

The ThemeTracker below shows where, and to what degree, the theme of Life and Death appears in each act of Death and the King’s Horseman. Click or tap on any chapter to read its Summary & Analysis.
How often theme appears:
Act length:
Act
Act 1
1
Act 2
2
Act 3
3
Act 4
4
Act 5
5
Get the entire Death and the King’s Horseman LitChart as a printable PDF.
"My students can't get enough of your charts and their results have gone through the roof." -Graham S.
Download it! 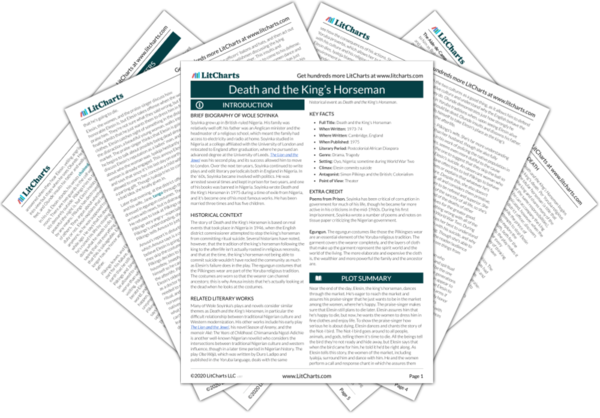 Life and Death Quotes in Death and the King’s Horseman

Below you will find the important quotes in Death and the King’s Horseman related to the theme of Life and Death.
Act 1 Quotes

Praise-Singer: They love to spoil you but beware. The hands of women also weaken the unwary.

Elesin: This night I'll lay my head upon their lap and go to sleep. This night I'll touch feet with their feet in a dance that is no longer of this earth. But the smell of their flesh, their sweat, the smell of indigo on their cloth, this is the last air I wish to breathe as I go to meet my great forebears.

Unlock explanations and citation info for this and every other Death and the King’s Horseman quote.

Ah, companions of this living world
What a thing it is, that even those
We call immortal
Should fear to die.

Jane: But Simon, do they really give anything away? I mean, anything that really counts. This affair for instance, we didn't know they still practised the custom did we?

Pilkings: Ye-e-es, I suppose you're right there. Sly, devious bastards.

Our marriage is not yet wholly fulfilled. When earth and passage wed, the consummation is complete only when there are grains of earth on the eyelids of passage. Stay by me till then. My faithful drummers, do me your last service. This is where I have chosen to do my leave-taking, in this heart of life, this hive which contains the swarm of the world in its small compass. This is where I have known love and laughter away from the palace.

But will they know you over there? Have they eyes to gauge your worth, have they the heart to love you, will they know what thoroughbred prances towards them in caparisons of honor? If they do not Elesin, if any there cuts your yam with a small knife, or pours you wine in a small calabash, turn back and return to welcoming hands.

Olunde: I don't find it morbid at all. I find it rather inspiring. It is an affirmative commentary on life.

Jane: Nonsense. Life should never be thrown deliberately away.

Olunde: And the innocent people round the harbour?

Jane: Oh, how does anyone know? The whole thing was probably exaggerated anyway.

Olunde: That was a risk the captain couldn't take.

How can I make you understand? He has protection. No one can undertake what he does tonight without the deepest protection the mind can conceive. What can you offer him in place of his peace of mind, in place of the honour and veneration of his own people? What you think of your Prince if he had refused to accept the risk of losing his life on this voyage? This...showing-the-flag tour of colonial possessions.

How can you be so callous! So unfeeling! You announce your father's own death like a surgeon looking down on some strange... stranger's body! You're a savage like all the rest.

Unlock with LitCharts A+
Act 5 Quotes

Elesin: You did not save my life District Officer. You destroyed it.

Elesin: And not merely my life but the lives of many. The end of the night's work is not over. Neither this year nor the next will see it. If I wished you well, I would pray that you do not stay long enough on our land to see the disaster you have brought upon us.

Pilkings: Well, I did my duty as I saw fit. I have no regrets.

You were the final gift of the living to their emissary to the land of the ancestors, and perhaps your warmth and youth brought new insights of this world to me and turned my feet leaden on this side of the abyss. For I confess to you, daughter, my weakness came not merely from the abomination of the white man who came violently into my fading presence, there was also a weight of longing on my earth-held limbs. I would have shaken it off, already my foot had begun to lift but then, the white ghost entered and all was defiled.

It is when the alien hand pollutes the source of will, when a stranger force of violence shatters the mind's calm resolution, this is when a man is made to commit the awful treachery of relief, commit in his thought the unspeakable blasphemy of seeing the hand of the gods in this alien rupture of his world. I know it was this thought that killed me, sapped my powers and turned me into an infant in the hands of unnamable strangers.

Elesin: Go to the gates, ghostly one. Whatever you find there, bring it to me.

Iyaloja: Not yet. It drags behind me on the slow, weary feet of women. Slow as it is, Elesin, it has long overtaken you. It rides ahead of your laggard will. 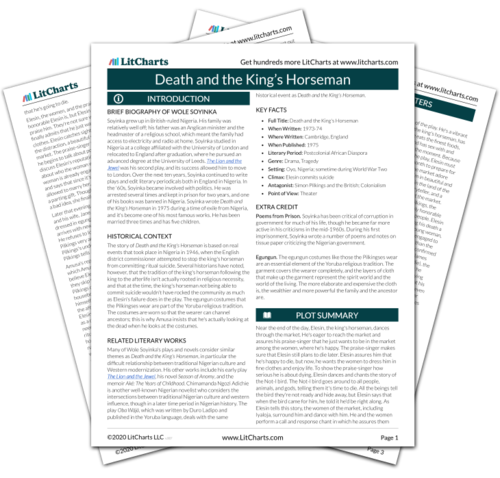 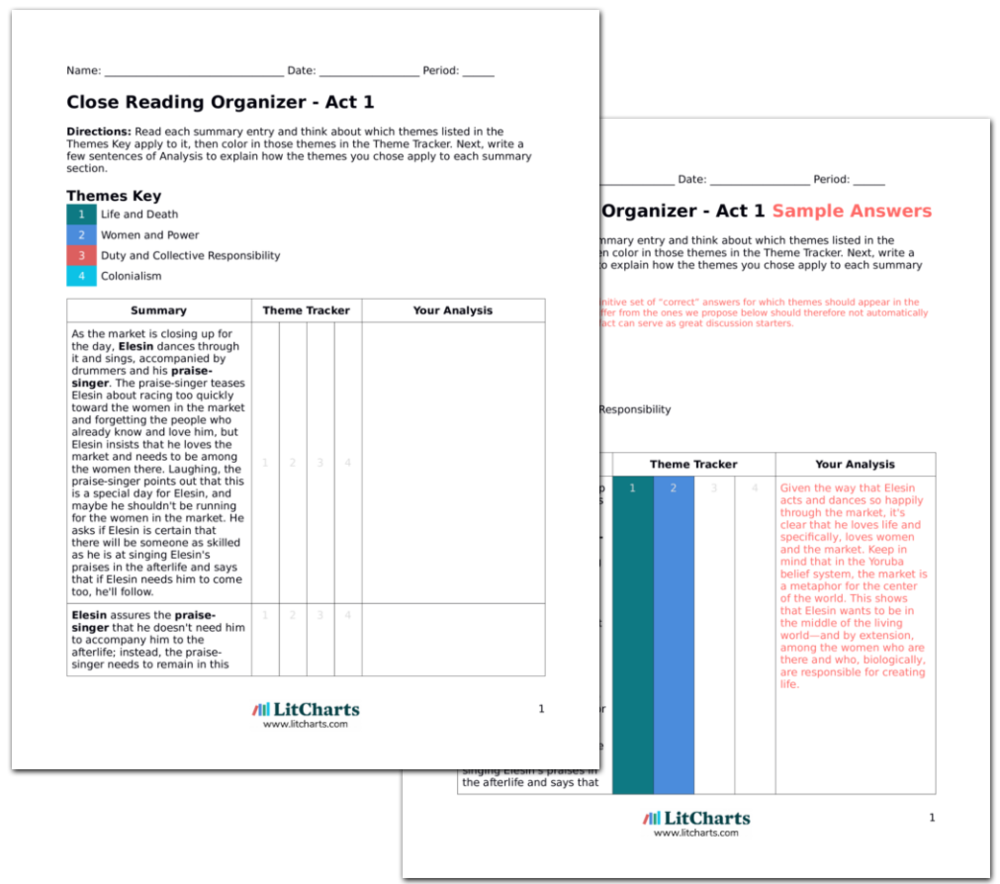