The sea is omnipresent as a kind of background in Venice (and Venice is, famously, partly submerged in it). Aschenbach spends much of his time on the beach near his hotel gazing out at the sea, and when he dies he sees himself as going out into its waters. The sea can be seen as symbolizing the psyche, and in particular the unconscious. It is immense, unknowable, and has dark, uncharted depths, much like the unknowable parts of the self. Aschenbach’s decision to take a trip to a seaside town, and in particular to a town itself in the sea, can thus be seen as symbolic of a decision to “travel to” and confront his own unconscious. Aschenbach is drawn in by the beauty of the sea, much as he is enticed by the pleasures of indulging in his inner repressed desires. However, just like the sea with its strong waves, the unconscious is powerful, and overwhelms Aschenbach, leading to his death.

The Sea Quotes in Death in Venice

The Death in Venice quotes below all refer to the symbol of The Sea. For each quote, you can also see the other characters and themes related to it (each theme is indicated by its own dot and icon, like this one:

). Note: all page numbers and citation info for the quotes below refer to the Dover Publications edition of Death in Venice published in 1995.
Chapter 3 Quotes

If you wanted to reach someplace overnight that was incomparable, different as a fairy tale, where would you go? But that was obvious! . . . A week and a half after his arrival on the island, in the early morning haze, a swift motor launch carried him and his luggage back across the waters to the naval base, where he went on land only long enough to ascend a plank gangway onto the damp deck of a ship that lay under steam and was heading for Venice.

He loved the sea for deep-seated reasons: because of the hard-working artist’s yearning for repose, his desire to take shelter in the bosom of undifferentiated immensity from the demanding complexity of the world’s phenomena; because of his own proclivity—forbidden, directly counter to his life’s work, and seductive for that very reason—for the unorganized, immoderate, eternal: for nothingness.

Unlock with LitCharts A+
Get the entire Death in Venice LitChart as a printable PDF.
"My students can't get enough of your charts and their results have gone through the roof." -Graham S.
Download 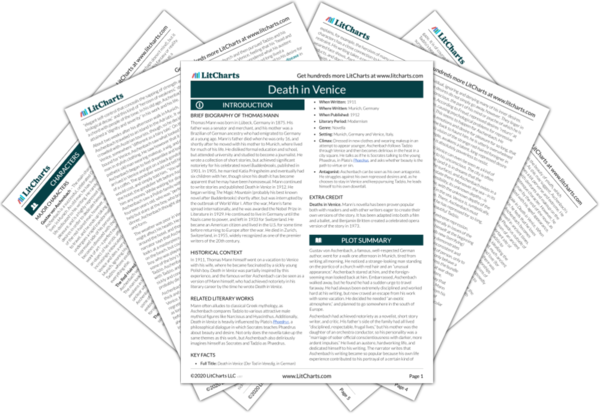 The Sea Symbol Timeline in Death in Venice

The timeline below shows where the symbol The Sea appears in Death in Venice. The colored dots and icons indicate which themes are associated with that appearance.

...old man with horror, and felt slightly like he was in a dream. Out at sea, Aschenbach lost track of time and daydreamed. After eating a meal, he looked out to... (full context)

...Aschenbach delighted in all the buildings and architecture of Venice and realized that coming by sea was the only proper way to arrive in “that most improbable of cities.” (full context)

...in the gondola. He was troubled, though, when he noticed they were going out to sea, not to the vaporetto stop from where he wanted to go to his hotel. His... (full context)

...fun in the water. He started daydreaming and looked out at the “unorganized, immoderate, eternal” sea, which he was fond of for “deep-seated reasons.” He saw the Polish boy in the... (full context)

...focus on the letters for long, though, and soon went back to looking at the sea and keeping an eye on the young Polish boy. (full context)

Aschenbach felt intoxicated by the sun and ocean and had a delirious vision. In the vision, he was in an idyllic scene under... (full context)

...at the hotel seemed to be decreasing. His barber one day mentioned something about a disease, but when Aschenbach asked him more about it, he wouldn’t say anything. That afternoon, having... (full context)

...defended his behavior to himself. He was very interested in the news of a possible disease spreading around Venice and read about it in newspapers, though no one seemed to be... (full context)

...sirocco (a warm wind) could be bad for people’s health. He said there was no disease in Venice. But immediately after this conversation, he was accosted by two hotel employees who... (full context)

...went to a British travel agency in Venice and asked an Englishman about the possible disease in Venice. The man said the germicide was simply a preventative measure, but then said... (full context)

...was likely. However, fearing the loss of tourism, the city was maintaining silence about the disease. (full context)

...Venice immediately for his own safety. Aschenbach thought of perhaps warning Tadzio’s family about the disease (and using that opportunity to “lay his hand in farewell” on Tadzio’s head. He suddenly... (full context)