Download this LitChart! (PDF)
Teachers and parents! Struggling with distance learning? Our Teacher Edition on Desert Solitaire can help.

Welcome to the LitCharts study guide on Edward Abbey's Desert Solitaire. Created by the original team behind SparkNotes, LitCharts are the world's best literature guides.

A concise biography of Edward Abbey plus historical and literary context for Desert Solitaire.

A quick-reference summary: Desert Solitaire on a single page.

In-depth summary and analysis of every chapter of Desert Solitaire. Visual theme-tracking, too.

Explanations of Desert Solitaire's symbols, and tracking of where they appear.

An interactive data visualization of Desert Solitaire's plot and themes.

Born to an organist mother who taught him to love art and an anarchist father who taught him to be skeptical of the government, Edward Abbey took to literature and politics at a very young age. Honorably discharged from a clerk position in the military—a distinction he rejected—Abbey studied the use of violence in political rebellion and openly espoused anarchy in his published essays. Thanks to these interests, the FBI opened a file on him; “I’d be insulted if they weren’t watching me,” Abbey later bragged. His early love of nature—cultivated in hitchhiking trips throughout the American West—brought him at age 29 to Arches National Monument, near Moab, Utah, for a summer park ranger job. Here, he kept notebooks that he would later turn into his politically charged memoir, Desert Solitaire (1968). Though several of Abbey’s novels became Hollywood films, this memoir, coinciding with the 1960s environmentalist movement, became his first real bestseller. He furthered that book’s harsh political rhetoric in The Monkey Wrench Gang (1975), a novel that later inspired the real-life eco-terrorist group Earth First!. Abbey continued to publish environmentalist novels, memoirs, and political commentary until he died at age 62. For these two influential works, and for his angry presence as a public figure, Abbey is regarded is an essential figure in the environmentalist movement of the 1960s and ’70s.
Get the entire Desert Solitaire LitChart as a printable PDF.
"My students can't get enough of your charts and their results have gone through the roof." -Graham S.
Download 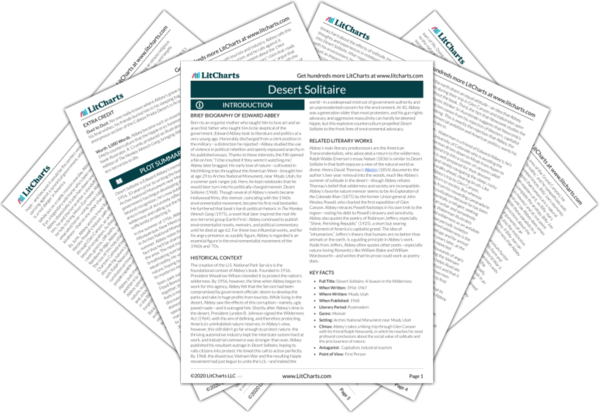 The creation of the U.S. National Park Service is the foundational context of Abbey’s book. Founded in 1916, President Woodrow Wilson intended it to protect the nation’s wilderness. By 1956, however, the time when Abbey began to work for this agency, Abbey felt that the Service had been compromised by government officials’ desire to develop the parks and rake in huge profits from tourists. While living in the desert, Abbey saw the effects of this corruption—namely, ugly paved roads—and it outraged him. Shortly after Abbey’s time in the desert, President Lyndon B. Johnson signed the Wilderness Act (1964), with the aim of defining, and therefore protecting, America’s uninhabited nature reserves. In Abbey’s view, however, this still didn’t go far enough to protect nature: the thriving automotive industry kept the interstate system hard at work, and industrial commerce was stronger than ever. Abbey published his resultant outrage in Desert Solitaire, hoping to rally citizens into protest. He timed this call to action perfectly. By 1968, the disastrous Vietnam War and the resulting hippie movement had just begun to unite the U.S.—and indeed the world—in a widespread mistrust of government authority and an unprecedented concern for the environment. At 40, Abbey was a generation older than most protesters, and his gun-rights advocacy and aggressive masculinity can hardly be deemed hippie, but this explosive counterculture propelled Desert Solitaire to the front lines of environmental advocacy.

Other Books Related to Desert Solitaire

Abbey’s main literary predecessors are the American Transcendentalists, who advocated a return to the wilderness. Ralph Waldo Emerson’s essay Nature (1836) is similar to Desert Solitaire in that both espouse a view of the natural world as divine. Henry David Thoreau’s Walden (1854) documents the author’s two-year removal into the woods, much like Abbey’s summer of solitude in the desert—though Abbey refutes Thoreau’s belief that wilderness and society are incompatible. Abbey’s favorite nature memoir seems to be An Exploration of the Colorado River (1875) by the former Union general John Wesley Powell, who charted the first expedition of Glen Canyon. Abbey retraces Powell footsteps in his own trek to the region—noting his debt to Powell’s bravery and sensitivity. Abbey also quotes the poetry of Robinson Jeffers, especially “Shine, Perishing Republic” (1925), a short but searing indictment of America’s capitalist greed. The idea of “inhumanism,” Jeffers’s theory that humans are no better than animals or the earth, is a guiding principle in Abbey’s work. Aside from Jeffers, Abbey often quotes other poets—especially nature-loving Romantics like William Blake and William Wordsworth—and wishes that his prose could work as poetry does.
Key Facts about Desert Solitaire

Dust to Dust. No one really knows where Abbey’s grave is. Per his final wishes, his friends buried him in his sleeping bag in an anonymous section of the Cabeza Prieta Desert in Arizona. 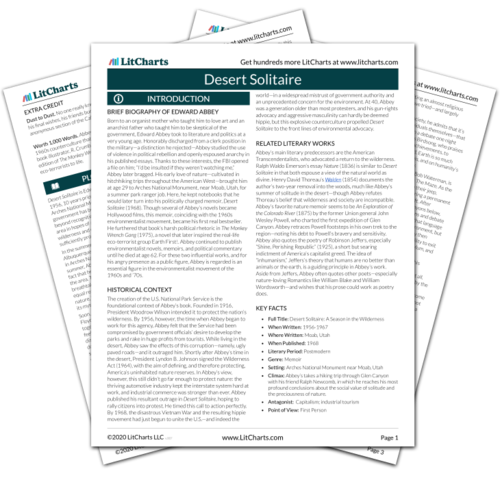 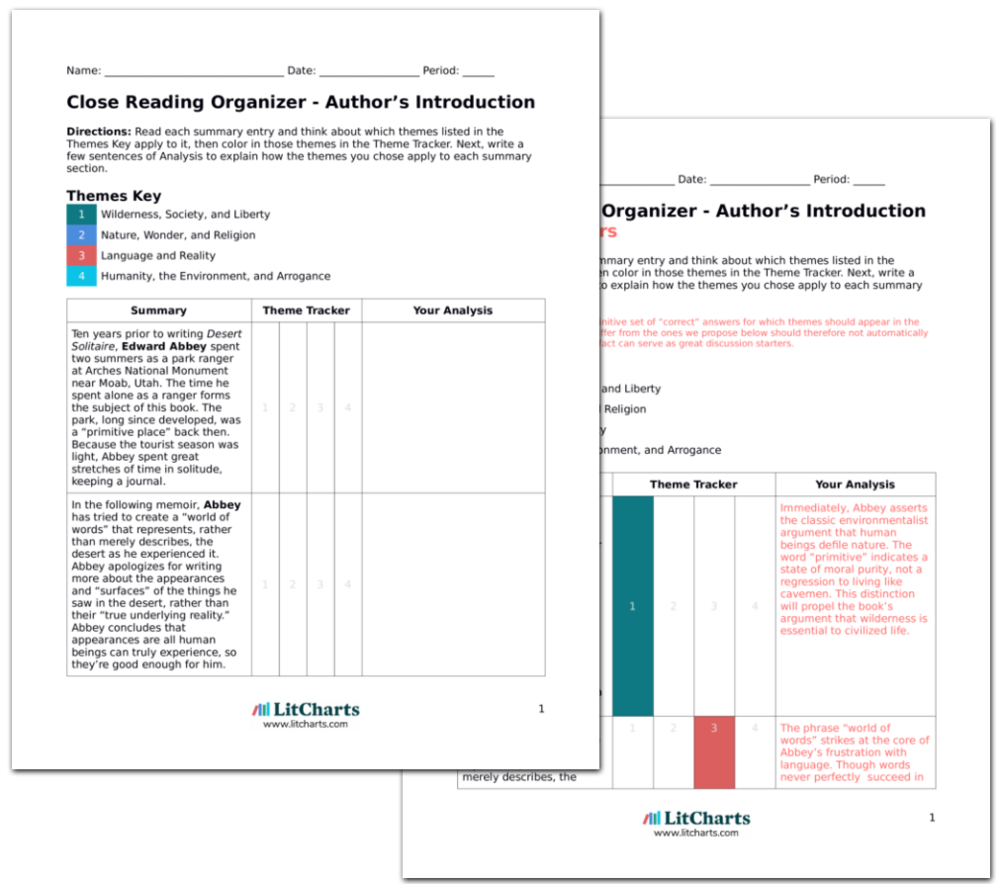