Download this LitChart! (PDF)
Teachers and parents! Struggling with distance learning? Our Teacher Edition on Discourse on Colonialism can help.

Get LitCharts A+
Ethnography is a method of long-term, intensive fieldwork that is generally conducted by anthropologists. Through the 20th century, this almost always entailed white Europeans living with non-European peoples in order to study their languages, social structures, and cultural beliefs. In many cases, these white anthropologists worked for the governments that colonized and enslaved the people they researched, and their ethnographic research often helped these governments find more effective ways to control and economically exploit native people. Virtually all of the academics Césaire criticizes in the Discourse on Colonialism performed ethnography in one fashion or another, and Césaire specifically criticizes the white supremacist intellectual Roger Caillois for arguing that ethnography must remain “white” because only European people are truly capable of knowledge about other cultures. For Césaire, this shows how the modern social sciences are founded on white supremacy, as their original purpose was to justify colonialization by shifting attention from material oppression to the ostensibly egalitarian realm of ideas. By building academies dedicated to learning about native cultures and museums full of stolen artifacts, anthropologists and ethnographers have suggested that white people can have more legitimate knowledge about nonwhite people than those people can have about themselves, which justifies colonialism by suggesting that it is necessary for scientific knowledge.

Ethnography Quotes in Discourse on Colonialism

The Discourse on Colonialism quotes below are all either spoken by Ethnography or refer to Ethnography. For each quote, you can also see the other terms and themes related to it (each theme is indicated by its own dot and icon, like this one:

). Note: all page numbers and citation info for the quotes below refer to the Monthly Review Press edition of Discourse on Colonialism published in 2001.
Section 5 Quotes

His doctrine? It has the virtue of simplicity.
That the West invented science. That the West alone knows how to think; that at the borders of the Western world there begins the shadowy realm of primitive thinking which, dominated by the notion of participation, incapable of logic, is the very model of faulty thinking.

And the museums of which M. Caillois is so proud, not for one minute does it cross his mind that, all things considered, it would have been better not to have needed them; that Europe would have done better to tolerate the non-European civilizations at its side, leaving them alive, dynamic and prosperous, whole and not mutilated; that it would have been better to let them develop and fulfill themselves than to present for our admiration, duly labelled, their dead and scattered parts; that anyway, the museum by itself is nothing; that it means nothing, that it can say nothing, when smug self-satisfaction rots the eyes, when a secret contempt for others withers the heart, when racism, admitted or not, dries up sympathy; that it means nothing if its only purpose is to feed the delights of vanity; that after all, the honest contemporary of Saint Louis, who fought Islam but respected it, had a better chance of knowing it than do our contemporaries (even if they have a smattering of ethnographic literature), who despise it.
No, in the scales of knowledge all the museums in the world will never weigh so much as one spark of human sympathy.

Unlock with LitCharts A+
Get the entire Discourse on Colonialism LitChart as a printable PDF.
"My students can't get enough of your charts and their results have gone through the roof." -Graham S.
Download 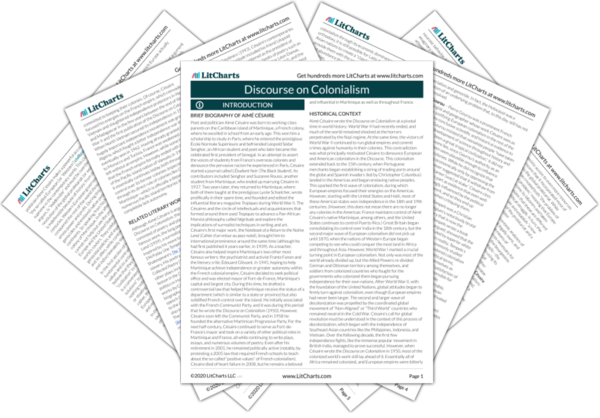 The timeline below shows where the term Ethnography appears in Discourse on Colonialism. The colored dots and icons indicate which themes are associated with that appearance.

...turns to another influential figure, the anthropologist Roger Caillois, who believes himself responsible for correcting ethnographers who increasingly see non-Europeans as equal. Caillois and many other academics (like the essayist Henri... (full context)

...religions, because of Christianity’s “dogmas and mysteries,” “symbolism” and “glory.” Caillois concludes that “the only ethnography is white”—meaning that only Europeans are worthy of studying others. But Césaire accuses Caillois of... (full context)
Previous
Bantu
Previous
Bantu
Next
Symbols
Next
Symbols
Get LitCharts 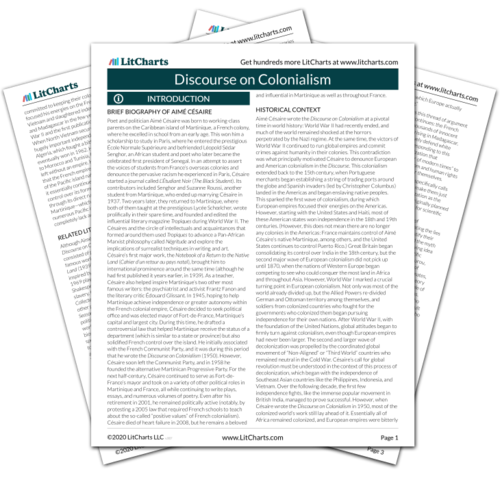 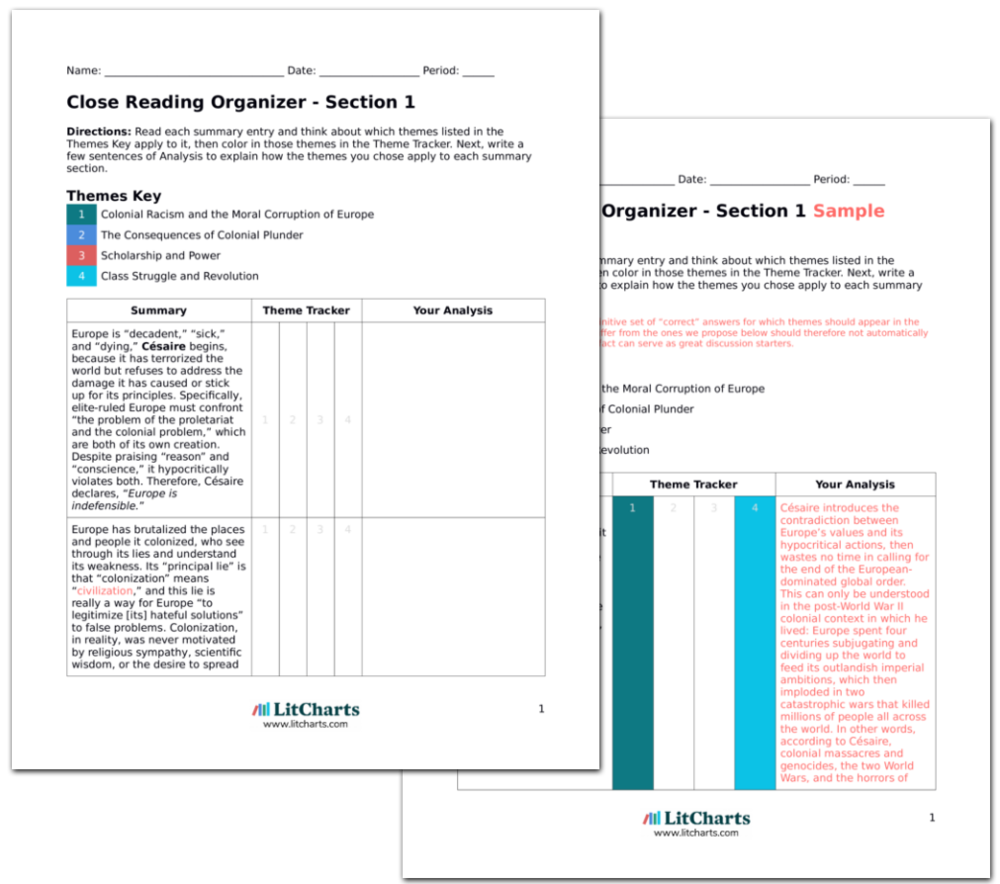