Fourteen-year-old Ishmael Leseur introduces himself and explains that he suffers from an incurable affliction: Ishmael Leseur’s Syndrome. The syndrome come from his name, and his name is the syndrome—it causes him to embarrass himself and other people to torment him. Ishmael’s Dad loves telling the story of how Ishmael got his name: Mom was pregnant and very overdue, and when she said she felt like a whale, Dad dressed up as Ahab from Moby-Dick and said he was seeking the white whale. Hours later, Ishmael was born and named after Moby-Dick’s narrator, Ishmael (and the novel’s first line, “Call Me Ishmael.”)

Ishmael only began suffering from Ishmael Leseur’s Syndrome last year, when he started secondary school at St. Daniel’s. When his teacher called his name, a boy in the class, Barry Bagsley, insisted Ishmael was a “wussy-crap name” and has made Ishmael’s life miserable since.

On Ishmael’s first school day of Year Nine, Barry taunts him as usual, calling Ishmael things like “Fish-whale Le-sewer.” But in in English class, their new teacher, Miss Tarango, gets frustrated with Barry’s rude antics and demonstrates “the power of language.” She invites him to sit in her chair—and if he’s still there by the time she circles the chair three times, he can have the rest of the week off. The bell rings before she finishes her third circle, and she reminds Barry she never said when she’d finish the circle. Humiliated, Barry admits defeat. The rest of first term passes in a blur, with Barry targeting Ishmael daily. Ishmael only stands up to Barry once, when Ishmael sees Barry and his cronies, Doug and Danny, taunting a little boy named Marty.

On the first day of second term, Miss Tarango introduces a new student, James Scobie, who has a facial tic that makes Barry target him right away. Ishmael knows things will get worse for him when Miss Tarango assigns him to be Scobie’s buddy. But when Barry taunts Scobie, Scobie stands his ground. Ishmael and his classmates are shocked—when Barry picks on someone, they’re supposed to just take it. But Scobie insists that he can’t feel fear because it disappeared when he had a brain tumor removed. For instance, he used to have a bug phobia and now he doesn’t. Barry isn’t convinced.

Several weeks later, Barry and his cronies test Scobie’s assertion that he can’t feel fear. They fill Scobie’s homeroom desk with insects and spiders; when Scobie opens his desk, the creatures fill the room. Scobie, though, isn’t afraid at all. Barry, Doug, and Danny get in trouble, and Scobie becomes a hero among the student body.

Several weeks later, at the assembly just before St. Daniels’s big football game against Churchill Grammar, Scobie announces that he’s starting a debating club. He also reads a rousing poem he wrote, encouraging the St. Daniel’s team to bravely take on Churchill. The coach loves the poem so much that he invites Scobie to come to the game. Ishmael tags along. During halftime, he watches Scobie recite the poem again—and against all odds, St. Daniel’s wins the game.

At school the next day, Scobie tells Ishmael that he’s signing Ishmael up for debating. Ishmael reluctantly agrees only after Scobie assures him that he won’t have to do any public speaking. Three other boys come to the first meeting: Ignatius Prindabel (whose mom wants him to develop better social skills), Orazio “Razza” Zorzotto (who wants to be a politician or a stand-up comedian), and Bill Kingsley (who comes looking for the chess club but agrees to stay for debating).

Scobie, Ishmael, and Razza attend a debating workshop, where Ishmael notices Kelly Faulkner and develops a crush on her. For the first few weeks, the debating club meetings go poorly. But with Scobie’s help, the team wins their first debate—and their second and third debates too. This qualifies them for the semifinals. A few minutes before the fourth debate, Scobie calls Ishmael and tells him neither Bill nor Ignatius can make it, so Ishmael has to fill in for them.

The debate goes poorly from the start: Kelly is on the opposing team, so Ishmael can barely organize his thoughts. To make matters worse, Razza writes crude things about Ishmael’s crush on Kelly on index cards. Ishmael gets up to speak, but he finds he doesn’t have any of the right cards. There’s also something in his pants—and when it falls out, it turns out to be a clothespin that Ishmael’s sister, Prue, decorated to look like Ringo Starr. Ishmael faints. When the debating team debriefs the next day, Ishmael is humiliated to learn that he accidentally groped Kelly Faulkner’s breast on the way down.

Soon after this, Scobie writes Ishmael a letter, explaining that a recent brain scan found a “shadow” and he needs to have more tests to make sure the tumor isn’t coming back. He won’t be able to compete in the semifinals. The debating team decides to compete without Scobie—if Ishmael agrees to speak. They do surprisingly well, as their topic is to prove that sci-fi and fantasy are relevant to real life. This happens to be Bill’s area of expertise, so the team only loses by one point. It feels like a win.

The next week, Miss Tarango announces that Scobie isn’t coming back to school. The principal, Brother Jerome, gives the debating team special certificates for getting to the semifinals. Barry, meanwhile, begins to bully Bill for his weight. Things get worse when Ishmael tells Barry to stop, as this causes Barry to continue taunting Bill and then look at Ishmael as though daring Ishmael to stop him.

Razza convinces Ishmael to go with him to the debating finals in support of the team that beat them in the semifinals. There, Kelly approaches Ishmael. He awkwardly apologizes for groping her, but Kelly says she really just wants to thank Ishmael for saving her brother, Marty, from Barry. They then discuss Ishmael’s name. Ishmael says he hates it, since he’s named after the narrator of Moby-Dick. Kelly is shocked to learn that Ishmael hasn’t read the book. So that night, Ishmael asks Dad for a copy and starts reading.

As Ishmael reads, he discovers he’s nothing like the Ishmael in the novel (Ishmael in Moby-Dick doesn’t ever do anything embarrassing), but he is a lot like the crazy captain Ahab. Ahab is out for revenge against the white whale who ate his leg—and Ishmael feels like he wants revenge against Barry in much the same way. Barry continues to terrorize Bill, and although Bill looks sadder and sadder every day, he refuses to tell teachers what’s happening.

Two weeks before school gets out, the vice principal, Mr. Barker, tells the debating team they’ll be reading prayers at the final school event. Ishmael stews about having to speak—until the day of final presentations in Mr. Barker’s class. Bill is the only boy who took the presentation seriously, but as he starts his PowerPoint, it becomes clear that Barry tampered with it: in addition to Bill’s slides, there are also slides of hippos and weight loss ads. Mr. Barker accuses Bill of making a joke and slacking off, and he gives Bill a D. Ishmael is enraged and later tells Razza he wants to do something, but he doesn’t know what. When Barry taunts Ishmael and Razza, he says that Ishmael “doesn’t have a prayer” of getting him to stop tormenting Bill.

Ishmael spends several days upset—but finally, after a dream, he realizes how he can get back at Barry. On the night of the final school event, Ishmael finds Barry and says that he does “have a prayer.” He puts a piece of paper in Barry’s hand and runs away. Ishmael’s plan is to read what he wrote on the paper he gave Barry—a prayer that Barry will stop bullying people—instead of the prayer Brother Jerome helped him write. But before Ishmael’s speech, he sees Barry in the audience. To Ishmael’s surprise, Barry is with his parents, and they look nice and normal. Worst of all, Barry wears a defeated look that Ishmael knows well, since Barry makes Ishmael look like that all the time. Ishmael decides to read his original prayer—he doesn’t want hurt anyone, even Barry.

After the speeches, Ishmael and the debating team say goodbye to Miss Tarango. To cheer Bill up, Razza organizes a sci-fi movie marathon for the weekend. Mr. Barker finds Ishmael and shares that Scobie will be returning to school next year. And then, Ignatius runs back and gives Ishmael a letter. The letter is from Kelly Faulkner, inviting Ishmael and Razza to a party in February. It includes her phone number and tells Ishmael to call her. Ishmael has never been happier. As he rolls in the grass outside the school, he feels like he’s on the ocean—kind of like Ishmael at the end of Moby-Dick. 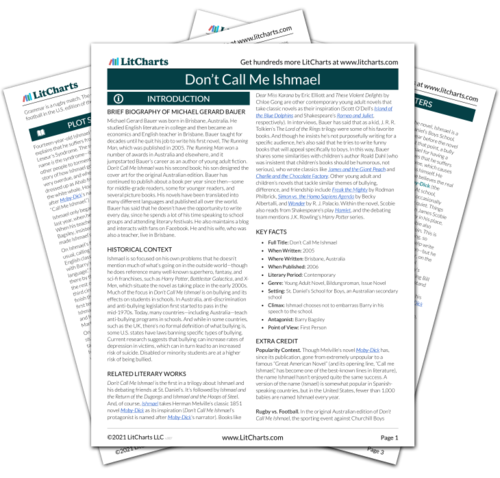 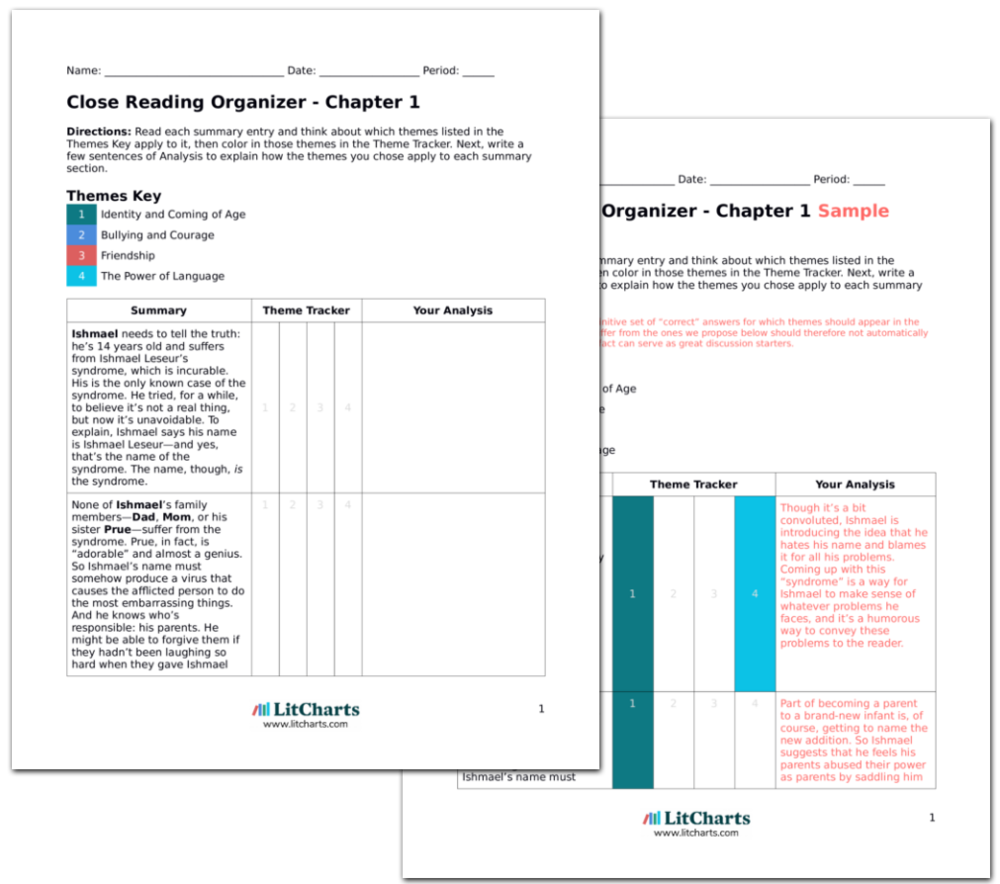