Download this LitChart! (PDF)
Teachers and parents! Struggling with distance learning? Our Teacher Edition on Doubt: A Parable can help.

Welcome to the LitCharts study guide on John Patrick Shanley's Doubt: A Parable. Created by the original team behind SparkNotes, LitCharts are the world's best literature guides.

A concise biography of John Patrick Shanley plus historical and literary context for Doubt: A Parable.

A quick-reference summary: Doubt: A Parable on a single page.

In-depth summary and analysis of every scene of Doubt: A Parable. Visual theme-tracking, too.

Explanations, analysis, and visualizations of Doubt: A Parable's themes.

Description, analysis, and timelines for Doubt: A Parable's characters.

Explanations of Doubt: A Parable's symbols, and tracking of where they appear.

An interactive data visualization of Doubt: A Parable's plot and themes.

John Patrick Shanley was born in New York City in 1950 and raised in The Bronx. He is the youngest of five siblings in an Irish-American family. As a boy and young man, he was known for making trouble in school, and was expelled from both kindergarten and high school. Later, he was put on academic probation at New York University, where he eventually earned an honors degree in Educational Theater. Since then, he has written numerous plays, including Doubt: A Parable, which won the Pulitzer Prize for Drama in addition to four Tony Awards. Shanley has also written films, such as Moonstruck, which came out in 1987, starred Nicolas Cage and Cher, and won three Academy Awards. He currently lives in New York City and has two adult sons.
Get the entire Doubt: A Parable LitChart as a printable PDF.
"My students can't get enough of your charts and their results have gone through the roof." -Graham S.
Download 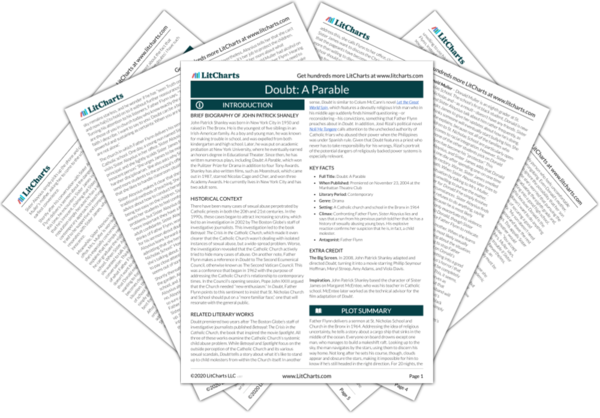 Historical Context of Doubt: A Parable

There have been many cases of sexual abuse perpetrated by Catholic priests in both the 20th and 21st centuries. In the 1990s, these cases began to attract increasing scrutiny, which led to an investigation in 2002 by The Boston Globe’s staff of investigative journalists. This investigation led to the book Betrayal: The Crisis in the Catholic Church, which made it even clearer that the Catholic Church wasn’t dealing with isolated instances of sexual abuse, but a wide-spread problem. Worse, the investigation revealed that the Catholic Church actively tried to hide many cases of abuse. On another note, Father Flynn makes a reference in Doubt to The Second Ecumenical Council, otherwise known as The Second Vatican Council. This was a conference that began in 1962 with the purpose of addressing the Catholic Church’s relationship to contemporary times. In the Council’s opening session, Pope John XXIII argued that the Church needed “new enthusiasm.” In Doubt, Father Flynn points to this sentiment to insist that St. Nicholas Church and School should put on a “more familiar face,” one that will resonate with the general public.

Other Books Related to Doubt: A Parable

Doubt premiered two years after The Boston Globe’s staff of investigative journalists published Betrayal: The Crisis in the Catholic Church, the book that inspired the movie Spotlight. All three of these works examine the Catholic Church’s systemic child abuse problem. While Betrayal and Spotlight focus on the outside perception of the Catholic Church and its various sexual scandals, Doubt tells a story about what it’s like to stand up to child molesters from within the Church itself. In another sense, Doubt is similar to Colum McCann’s novel Let the Great World Spin, which features a devoutly religious Irish man who in his middle age suddenly finds himself questioning—or reconsidering—his convictions, something that Father Flynn preaches about in Doubt. In addition, José Rizal’s political novel Noli Me Tangere calls attention to the unchecked authority of Catholic friars who abused their power when the Philippines was under Spanish rule. Given that Doubt features a priest who never has to take responsibility for his wrongs, Rizal’s portrait of the potential dangers of religiously backed power systems is especially relevant.
Key Facts about Doubt: A Parable

Extra Credit for Doubt: A Parable

Inspiration. John Patrick Shanley based the character of Sister James on Margaret McEntee, who was his teacher in Catholic school. McEntee later worked as the technical advisor for the film adaptation of Doubt. 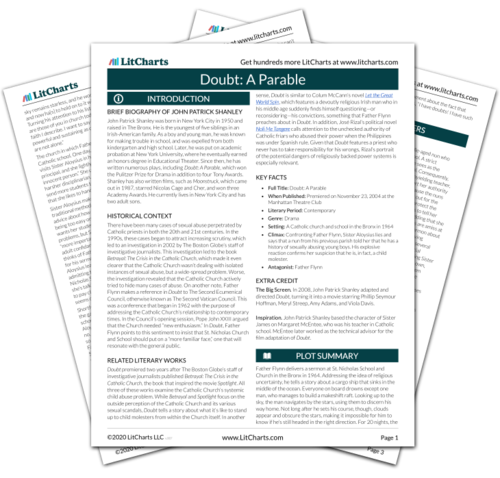 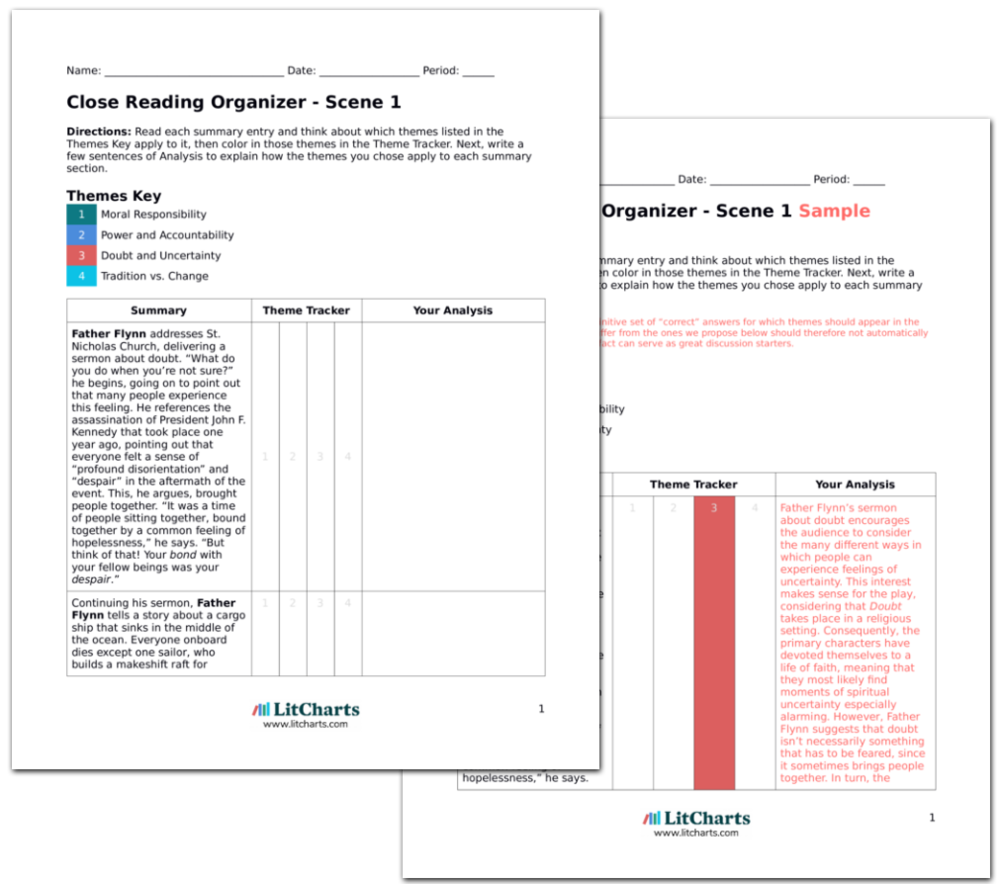