Download this LitChart! (PDF)
Teachers and parents! Struggling with distance learning? Our Teacher Edition on Dreams from My Father can help.

Welcome to the LitCharts study guide on Barack Obama's Dreams from My Father. Created by the original team behind SparkNotes, LitCharts are the world's best literature guides.

Dreams from My Father: Introduction

A concise biography of Barack Obama plus historical and literary context for Dreams from My Father.

Dreams from My Father: Plot Summary

A quick-reference summary: Dreams from My Father on a single page.

In-depth summary and analysis of every chapter of Dreams from My Father. Visual theme-tracking, too.

Dreams from My Father: Themes

Explanations, analysis, and visualizations of Dreams from My Father's themes.

Dreams from My Father: Quotes

Dreams from My Father's important quotes, sortable by theme, character, or chapter.

Dreams from My Father: Characters

Description, analysis, and timelines for Dreams from My Father's characters.

Dreams from My Father: Symbols

Explanations of Dreams from My Father's symbols, and tracking of where they appear.

Dreams from My Father: Theme Wheel

An interactive data visualization of Dreams from My Father's plot and themes.

As Obama details in his memoir, he was born in 1961 to a white American mother and a Black Kenyan father. His parents separated when he was a toddler, and he grew up in Hawaii and Indonesia. After graduating from Columbia University, Obama worked in finance for several years before becoming a community organizer in Chicago. Following his first trip to Kenya in the late 1980s, Obama studied law at Harvard, eventually being selected as an editor to the Harvard Law Review. Obama met and married his wife, Michelle Obama, while working at a Chicago law firm. A few years later, Obama was offered an advance to write what eventually became 1995’s Dreams from My Father. Starting in 1997, Obama served in the Illinois legislature for seven years and as a U.S. senator for three. He was then elected as the first Black president of the U.S. in 2008, serving two terms in office. During his presidency, Obama oversaw the creation of the Affordable Care Act, which expanded health insurance coverage to more Americans. He also supported the Supreme Court’s 2015 ruling in Obergefell v. Hodges (legalizing gay marriage), and some credit him with pulling the country out of the Great Recession. Since the end of his second term as president in 2017, Obama has dedicated his efforts to his organization, the Obama Foundation, which provides scholarships and other opportunities to young Black people. He also oversees plans for his presidential library, which is planned for Chicago.
Get the entire Dreams from My Father LitChart as a printable PDF.
"My students can't get enough of your charts and their results have gone through the roof." -Graham S.
Download 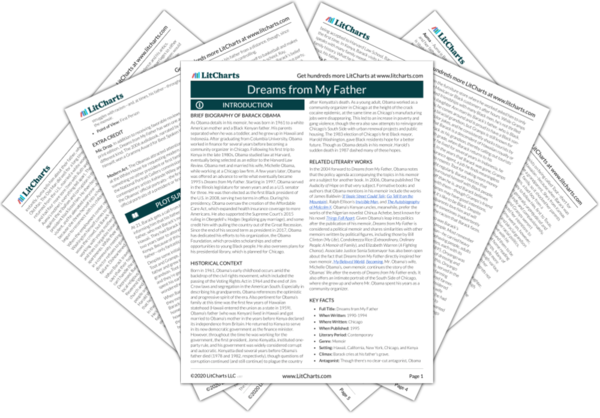 Historical Context of Dreams from My Father

Born in 1961, Obama’s early childhood occurs amid the backdrop of the civil rights movement, which included the passing of the Voting Rights Act in 1964 and the end of Jim Crow laws and segregation in the American South. Especially in describing his grandparents, Obama references the optimistic and progressive spirit of the era. Also pertinent for Obama’s family at this time was the first few years of Hawaiian statehood (Hawaii entered the union as a state in 1959). Obama’s father (who was Kenyan) lived in Hawaii and got married to Obama’s mother in the years before Kenya declared its independence from Britain. He returned to Kenya to serve in its new democratic government as the finance minister. However, throughout the time he was working for the government, the first president, Jomo Kenyatta, instituted one-party rule, and his government was widely considered corrupt and autocratic. Kenyatta died several years before Obama’s father died (1978 and 1982, respectively), though questions of corruption continued (and still continue) to plague the country after Kenyatta’s death. As a young adult, Obama worked as a community organizer in Chicago at the height of the crack cocaine epidemic, at the same time as Chicago’s manufacturing jobs were disappearing. This led to an increase in poverty and gang violence, though the era also saw attempts to reinvigorate Chicago’s South Side with urban renewal projects and public housing. The 1983 election of Chicago’s first Black mayor, Harold Washington, gave Black residents hope for a better future. Though as Obama details in his memoir, Harold’s sudden death in 1987 dashed many of these hopes.

Other Books Related to Dreams from My Father

In the 2004 forward to Dreams from My Father, Obama notes that the policy agenda accompanying the topics in his memoir are a subject for another book. In 2006, Obama published The Audacity of Hope on that very subject. Formative books and authors that Obama mentions in his memoir include the works of James Baldwin (If Beale Street Could Talk; Go Tell It on the Mountain), Ralph Ellison’s Invisible Man, and The Autobiography of Malcolm X. Obama’s Kenyan uncles, meanwhile, prefer the works of the Nigerian novelist Chinua Achebe, best known for his novel Things Fall Apart. Given Obama’s leap into politics after the publication of his memoir, Dreams from My Father is considered a political memoir and shares similarities with other memoirs written by political figures, including those by Bill Clinton (My Life), Condoleezza Rice (Extraordinary, Ordinary People: A Memoir of Family), and Elizabeth Warren (A Fighting Chance). Associate Justice Sonia Sotomayor has also been open about the fact that Dreams from My Father directly inspired her own memoir, My Beloved World. Becoming, Mr. Obama’s wife, Michelle Obama’s, own memoir, continues the story of the Obamas’ life after the events of Dreams from My Father ends. It also offers an intimate portrait of the South Side of Chicago, where she grew up and where Mr. Obama spent his years as a community organizer.
Key Facts about Dreams from My Father

Extra Credit for Dreams from My Father

Mic Drop. In addition to receiving favorable reviews for the print edition, Dreams from My Father has won one award of a different kind. The 2006 audiobook, narrated by Obama himself, won a Grammy Award for Best Spoken Word Album.

Modern Art. The Obamas attracted attention during their time at the White House for requesting modern art to hang, something no other president or first family had done. Later, the National Portrait Gallery commissioned famous contemporary artists Kehinde Wiley and Amy Sherald to paint the Obamas’ official portraits—the first Black artists to paint official portraits of a president or first lady. 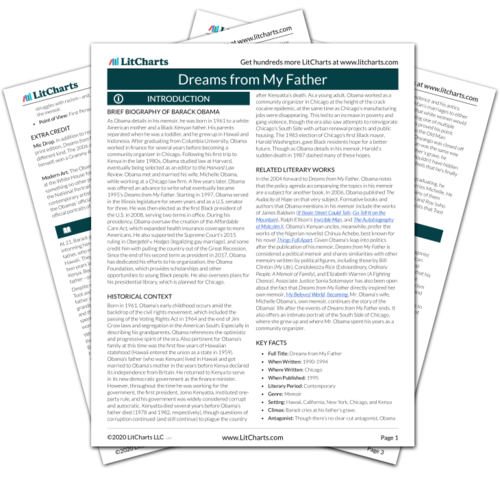 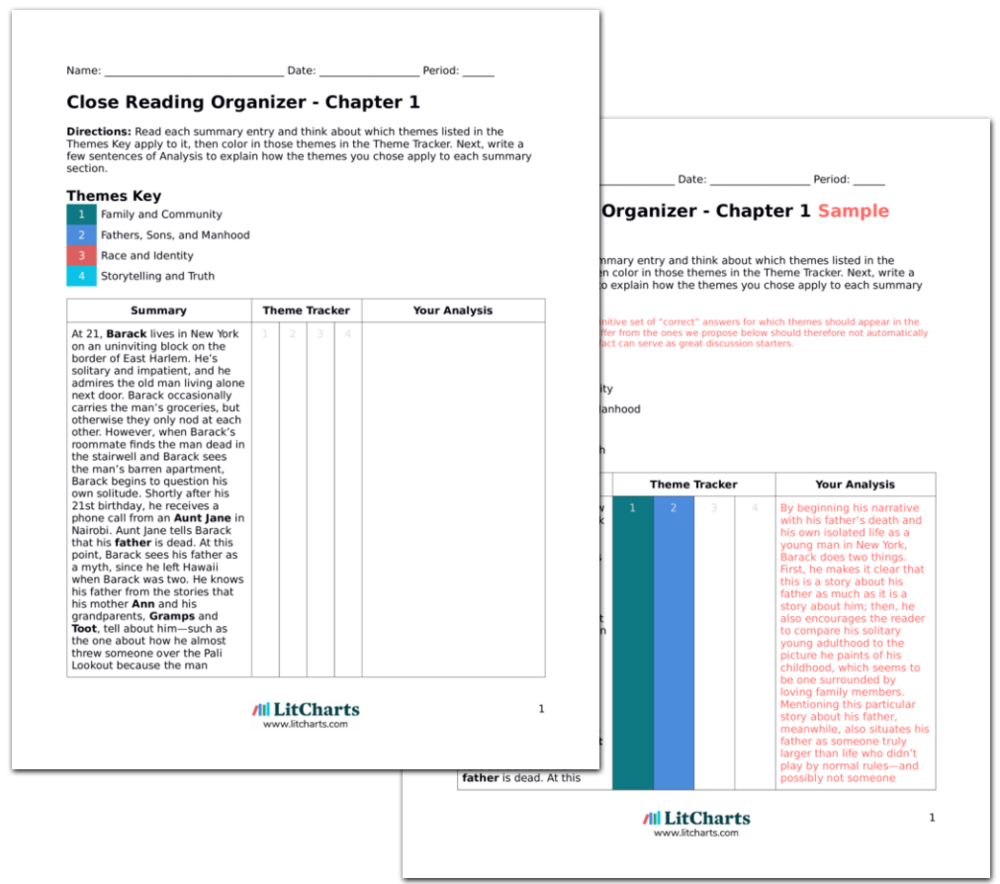