Download this LitChart! (PDF)
Teachers and parents! Struggling with distance learning? Our Teacher Edition on Ella Minnow Pea can help.

Welcome to the LitCharts study guide on Mark Dunn's Ella Minnow Pea. Created by the original team behind SparkNotes, LitCharts are the world's best literature guides.

A concise biography of Mark Dunn plus historical and literary context for Ella Minnow Pea.

A quick-reference summary: Ella Minnow Pea on a single page.

In-depth summary and analysis of every chapter of Ella Minnow Pea. Visual theme-tracking, too.

Explanations of Ella Minnow Pea's symbols, and tracking of where they appear.

Mark Dunn was born in Memphis Tennessee. He studied film at Memphis State University and then pursued a post-graduate degree in screenwriting at the University of Texas. He moved to New York in 1987, working at the New York Public Library while writing plays. Since then, Dunn has written five novels and over 30 plays, including Belles and Five Tellers Dancing in the Rain. Ella Minnow Pea, published in 2001, was Dunn’s debut novel. Dunn now lives in Santa Fe, New Mexico.
Get the entire Ella Minnow Pea LitChart as a printable PDF.
"My students can't get enough of your charts and their results have gone through the roof." -Graham S.
Download it! 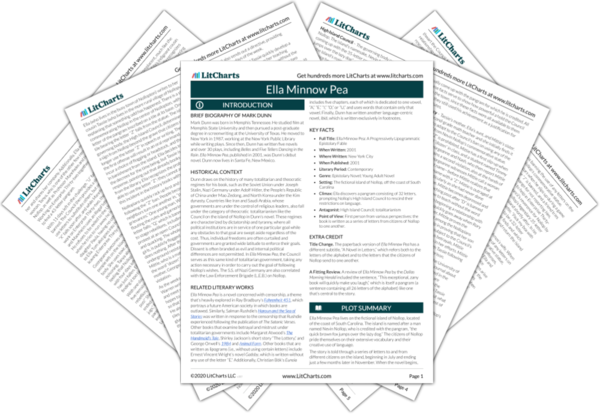 Dunn draws on the history of many totalitarian and theocratic regimes for his book, such as the Soviet Union under Joseph Stalin, Nazi Germany under Adolf Hitler, the People’s Republic of China under Mao Zedong, and North Korea under the Kim dynasty. Countries like Iran and Saudi Arabia, whose governments are under the control of religious leaders, also fall under the category of theocratic  totalitarianism like the Council on the island of Nollop in Dunn’s novel. These regimes are characterized by dictatorship and tyranny, where all political institutions are in service of one particular goal while any obstacles to that goal are swept aside regardless of the cost. Thus, individual freedoms are often curtailed and governments are granted wide latitude to enforce their goals. Dissent is often branded as evil and internal political differences are not permitted. In Ella Minnow Pea, the Council serves as this same kind of totalitarian government, taking any action necessary in order to carry out the goal of following Nollop’s wishes. The S.S. of Nazi Germany are also correlated with the Law Enforcement Brigade (L.E.B.) on Nollop.

Ella Minnow Pea is a novel concerned with censorship, a theme that’s heavily explored in Ray Bradbury’s Fahrenheit 451, which portrays a future American society in which books are outlawed. Similarly, Salman Rushdie’s Haroun and the Sea of Stories was written in response to the censorship that Rushdie experienced following the publication of The Satanic Verses. Other books that examine betrayal and mistrust under totalitarian governments include Margaret Atwood’s The Handmaid’s Tale, Shirley Jackson’s short story “The Lottery,” and George Orwell’s 1984 and Animal Farm. Other books that are written as lipograms (i.e., without using certain letters) include Ernest Vincent Wright’s novel Gadsby, which is written without any use of the letter “E.” Additionally, Christian Bök’s Eunoia includes five chapters, each of which is dedicated to one vowel, “A,” “E,” “I,” “O,” or “U,” and uses words that contain only that vowel. Finally, Dunn has written another language-centric novel, Ibid, which is written exclusively in footnotes.
Key Facts about Ella Minnow Pea

Title Change. The paperback version of Ella Minnow Pea has a different subtitle, “A Novel in Letters,” which refers both to the letters of the alphabet and to the letters that the citizens of Nollop send to one another.

A Fitting Review. A review of Ella Minnow Pea by the Dallas Morning Herald included the sentence, “This exceptional, zany book will quickly make you laugh,” which is itself a pangram (a sentence containing all 26 letters of the alphabet) like one that’s central to the story. 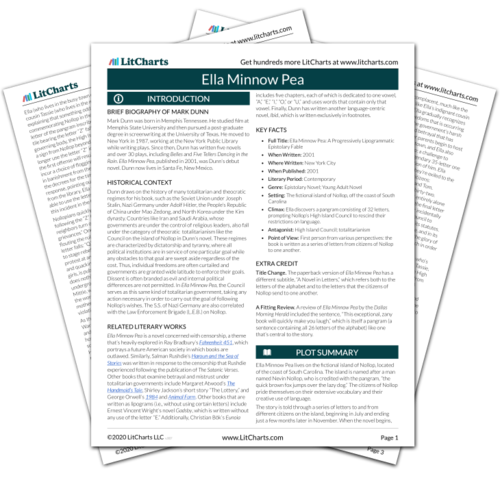 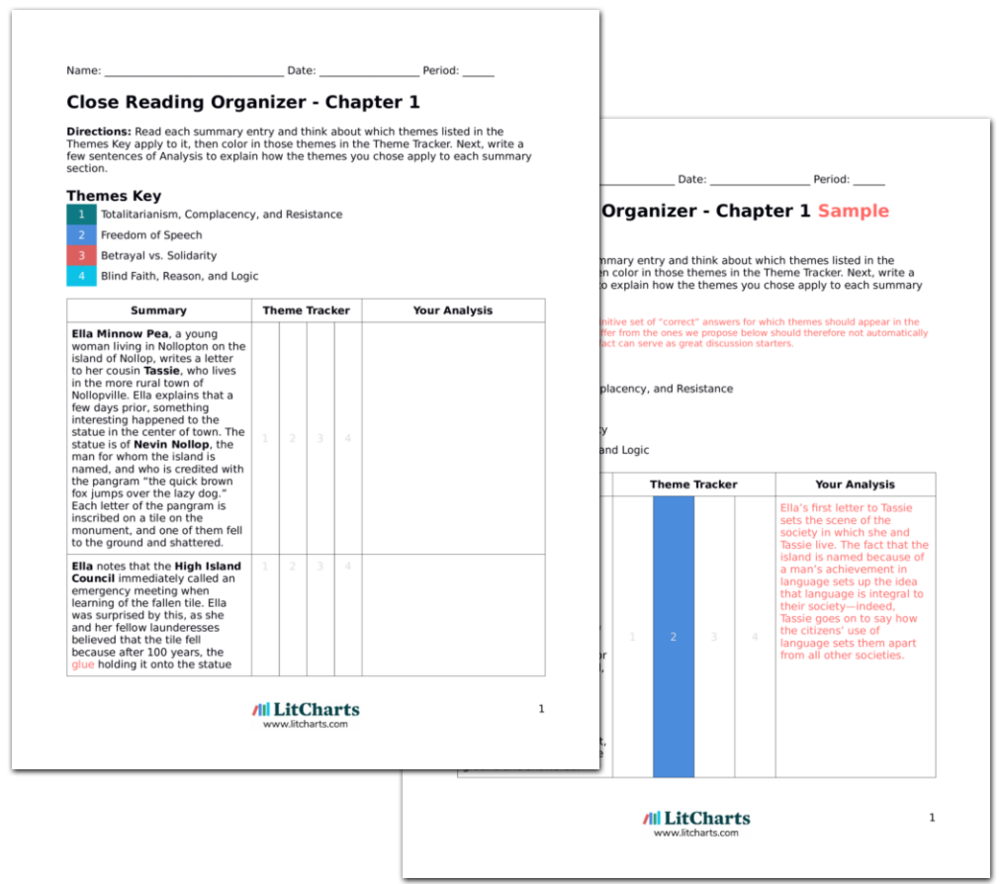