Welcome to the LitCharts study guide on Pam Muñoz Ryan's Esperanza Rising. Created by the original team behind SparkNotes, LitCharts are the world's best literature guides.

A concise biography of Pam Muñoz Ryan plus historical and literary context for Esperanza Rising.

A quick-reference summary: Esperanza Rising on a single page.

In-depth summary and analysis of every chapter of Esperanza Rising. Visual theme-tracking, too.

Explanations of Esperanza Rising's symbols, and tracking of where they appear.

An interactive data visualization of Esperanza Rising's plot and themes.

Pam Muñoz Ryan was born in Bakersfield, California. A rocky home situation meant that her mother remarried, and her family moved around town—throughout her childhood, books were a refuge for the young Pam. After college she took a job as a bilingual teacher, and eventually became the director of an early childhood education program in Southern California. When she took a writing class during a part-time master’s degree program, a teacher encouraged her to pursue writing. After facing several rejections from agents and publishers, Muñoz Ryan hit her stride and began publishing picture books and, later, novels for young adults. The author of over twenty books for young readers of all ages, Muñoz Ryan has been the recipient of awards, grants, and prizes from the American Library Association and the Newbery Medal, PEN USA, and the New York Historical Society. She lives with her family outside of San Diego.
Get the entire Esperanza Rising LitChart as a printable PDF.
"My students can't get enough of your charts and their results have gone through the roof." -Graham S.
Download 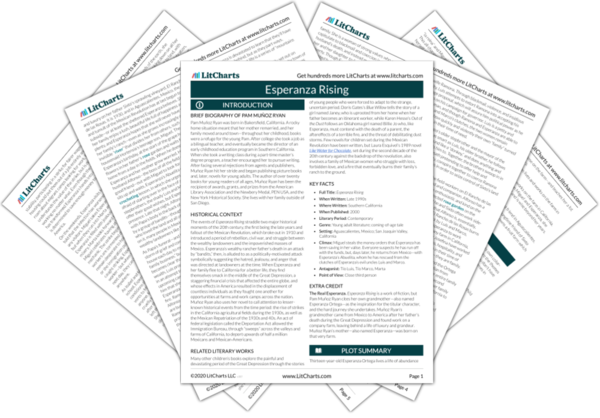 The events of Esperanza Rising straddle two major historical moments of the 20th century, the first being the late years and fallout of the Mexican Revolution, which broke out in 1910 and introduced a period of rebellion, civil war, and struggle between the wealthy landowners and the impoverished masses of Mexico. Esperanza’s wealthy rancher father’s death in an attack by “bandits,” then, is alluded to as a politically-motivated attack symbolically suggesting the hatred, jealousy, and anger that was directed at landowners at the time. When Esperanza and her family flee to California for a better life, they find themselves smack in the middle of the Great Depression, a staggering financial crisis that affected the entire globe, and whose effects in America resulted in the displacement of countless individuals as they fought one another for opportunities at farms and work camps across the nation. Muñoz Ryan also uses her novel to call attention to lesser-known historical events from the time period: the rise of strikes in the California agricultural fields during the 1930s, as well as the Mexican Repatriation of the 1930s and 40s. An act of federal legislation called the Deportation Act allowed the Immigration Bureau, through “sweeps” across the valleys and farms of California, to deport upwards of half a million Mexicans and Mexican-Americans.

Other Books Related to Esperanza Rising

Many other children’s books explore the painful and devastating period of the Great Depression through the stories of young people who were forced to adapt to the strange, uncertain period. Doris Gates’s Blue Willow tells the story of a girl named Janey, who is uprooted from her home when her father becomes an itinerant worker, while Karen Hesse’s Out of the Dust follows an Oklahoma girl named Billie Jo who, like Esperanza, must contend with the death of a parent, the aftereffects of a terrible fire, and the threat of debilitating dust storms. Few novels for children set during the Mexican Revolution have been written, but Laura Esquivel’s 1989 novel Like Water for Chocolate, set during the second decade of the 20th century against the backdrop of the revolution, also involves a family of Mexican women who struggle with loss, forbidden love, and a fire that eventually burns their family’s ranch to the ground.
Key Facts about Esperanza Rising

The Real Esperanza. Esperanza Rising is a work of fiction, but Pam Muñoz Ryan cites her own grandmother—also named Esperanza Ortega—as the inspiration for the titular character, and the hard journey she undertakes. Muñoz Ryan’s grandmother came from Mexico to America after her father’s death during the Great Depression and found work on a company farm, leaving behind a life of luxury and grandeur. Muñoz Ryan’s mother—also named Esperanza—was born on that very farm. 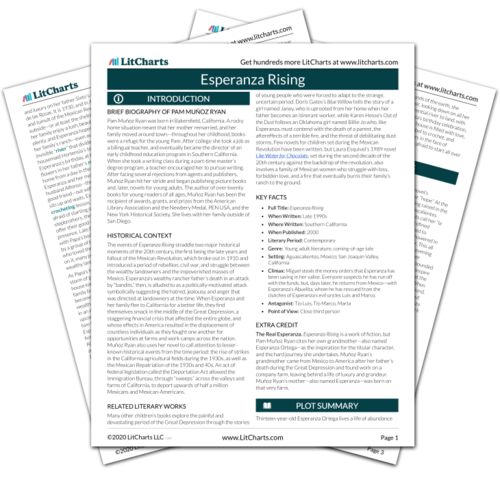 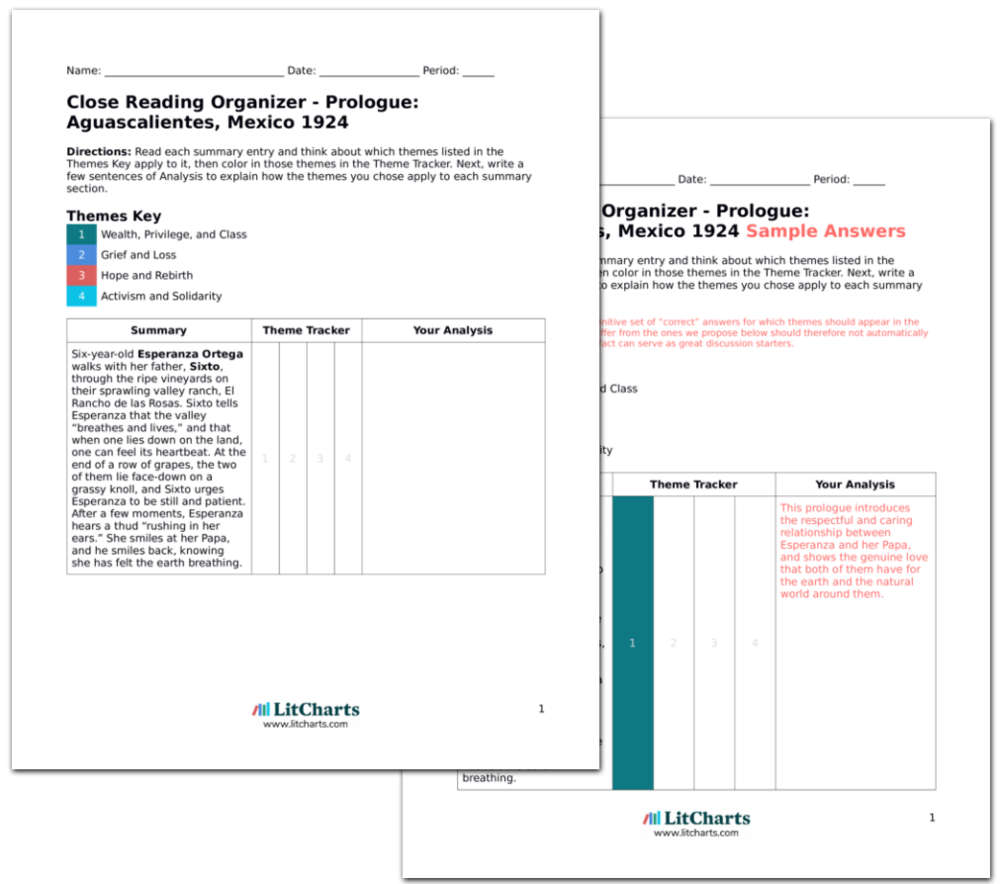