Download this LitChart! (PDF)
Teachers and parents! Struggling with distance learning? Our Teacher Edition on Everything, Everything can help.

Welcome to the LitCharts study guide on Nicola Yoon's Everything, Everything. Created by the original team behind SparkNotes, LitCharts are the world's best literature guides.

A concise biography of Nicola Yoon plus historical and literary context for Everything, Everything.

Everything, Everything: Plot Summary

A quick-reference summary: Everything, Everything on a single page.

Everything, Everything: Detailed Summary & Analysis

In-depth summary and analysis of every chapter of Everything, Everything. Visual theme-tracking, too.

Explanations, analysis, and visualizations of Everything, Everything's themes.

Everything, Everything's important quotes, sortable by theme, character, or chapter.

Description, analysis, and timelines for Everything, Everything's characters.

Explanations of Everything, Everything's symbols, and tracking of where they appear.

Nicola Yoon was born in Jamaica and grew up in both Jamaica and Brooklyn, New York. She received a bachelor’s degree in electrical engineering from Cornell University, though an elective creative writing class sparked an interest in writing. She attended a master’s program at Emerson College for creative writing, though she spent 20 years as a programmer for investment firms. She published her first novel, Everything, Everything, in 2015 after the birth of her daughter, who is biracial. Her husband, David Yoon, drew the illustrations for the novel. It spent 40 weeks on the New York Times bestseller list, and her second novel, The Sun Is Also a Star, received even more awards than its predecessor. Yoon and her family have been very involved with the organization We Need Diverse Books, a group that works to increase and promote diversity and representation in literature. The Yoon family lives in Los Angeles, California.
Get the entire Everything, Everything LitChart as a printable PDF.
"My students can't get enough of your charts and their results have gone through the roof." -Graham S.
Download 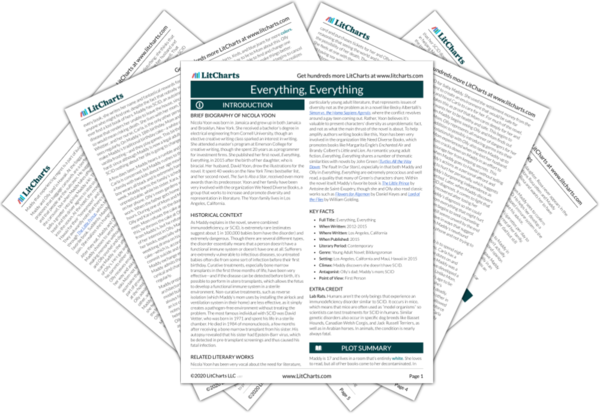 As Maddy explains in the novel, severe combined immunodeficiency, or SCID, is extremely rare (estimates suggest about 1 in 100,000 babies born have the disorder) and extremely dangerous. Though there are several different types, the disorder essentially means that a person doesn’t have a functional immune system or doesn’t have one at all. Sufferers are extremely vulnerable to infectious diseases, so untreated babies often die from some sort of infection before their first birthday. Curative treatments, especially bone marrow transplants in the first three months of life, have been very effective—and if the disease can be detected before birth, it’s possible to perform in utero transplants, which allows the fetus to develop a functional immune system in a sterile environment. Non-curative treatments, such as reverse isolation (which Maddy’s mom uses by installing the airlock and ventilation system in their home) are less effective, as it simply creates a pathogen-free environment without treating the problem. The most famous individual with SCID was David Vetter, who was born in 1971 and spent his life in a sterile chamber. He died in 1984 of mononucleosis, a few months after receiving a bone marrow transplant from his sister. His autopsy revealed that his sister had Epstein-Barr virus, which be detected in pre-transplant screenings and thus caused his fatal infection.

Nicola Yoon has been very vocal about the need for literature, particularly young adult literature, that represents issues of diversity not as the problem as in a novel like Becky Albertalli's Simon vs. the Homo Sapiens Agenda, where the conflict revolves around a gay teen coming out. Rather, Yoon believes it’s valuable to present characters' diversity as unproblematic fact, and not as what the main thrust of the novel is about. To help amplify authors writing books like this, Yoon has been very involved in the organization We Need Diverse Books, which promotes books like Margarita Engle's Enchanted Air and Brandy Colbert's Little and Lion. As romantic young adult fiction, Everything, Everything shares a number of thematic similarities with novels by John Green (Turtles All the Way Down; The Fault In Our Stars), especially in that both Maddy and Olly in Everything, Everything are extremely precocious and well read, a quality that many of Green’s characters share. Within the novel itself, Maddy’s favorite book is The Little Prince by Antoine de Saint-Exupéry, though she and Olly also read classic works such as Flowers for Algernon by Daniel Keyes and Lord of the Flies by William Golding.
Key Facts about Everything, Everything

Lab Rats. Humans aren’t the only beings that experience an immunodeficiency disorder similar to SCID. It occurs in mice, which means that mice are often used as “model organisms” so scientists can test treatments for SCID in humans. Similar genetic disorders also occur in specific dog breeds like Basset Hounds, Canadian Welsh Corgis, and Jack Russell Terriers, as well as in Arabian horses. In animals, the condition is nearly always fatal. 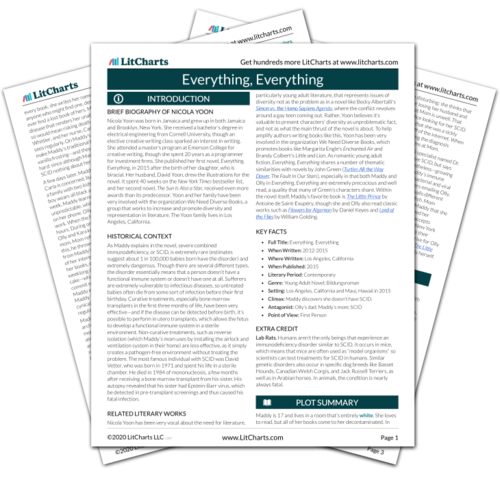 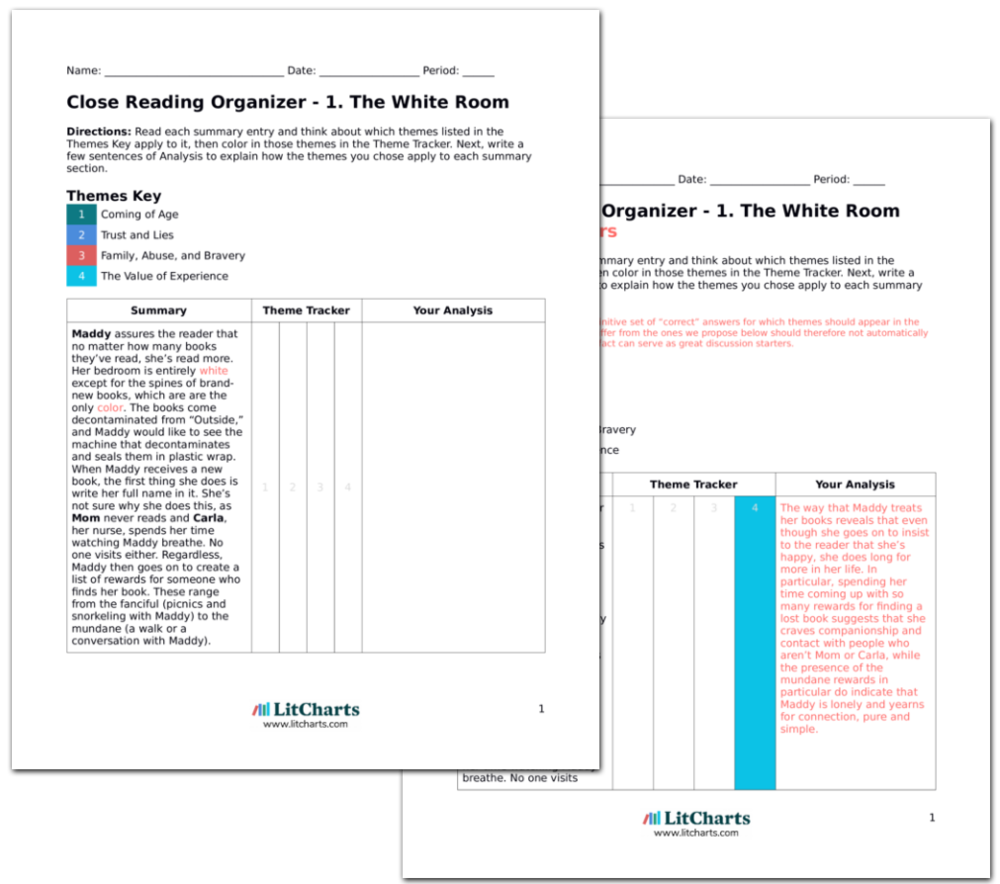