Welcome to the LitCharts study guide on Mohsin Hamid's Exit West. Created by the original team behind SparkNotes, LitCharts are the world's best literature guides.

A concise biography of Mohsin Hamid plus historical and literary context for Exit West.

A quick-reference summary: Exit West on a single page.

In-depth summary and analysis of every chapter of Exit West. Visual theme-tracking, too.

Explanations of Exit West's symbols, and tracking of where they appear.

An interactive data visualization of Exit West's plot and themes.

Mohsin Hamid was born in Pakistan, but he spent much of his childhood in Palo Alto, California while his father pursued a PhD at Stanford University. After the age of nine, Hamid returned to Pakistan with his family and attended Aitchison College, a highly prestigious boarding school founded in the late 19th century. At the age of 18, he attended Princeton University and graduated summa cum laude (with highest honors). He attended Harvard Law School, but found it boring. In his spare time, he worked on a novel he had begun writing as an undergraduate at Princeton; in 2000, he published this work, Moth Smoke. Moth Smoke was a success in the United States and a huge hit in Pakistan (it was even adapted as a TV miniseries), enabling Hamid to devote himself to writing full-time. He didn't complete another novel until 2007, when he published The Reluctant Fundamentalist, which reflects both his experiences at Princeton and his reflections about the post 9/11 world. His third novel, How to Get Filthy Rich in Rising Asia, was released in 2013, and his fourth, Exit West, appeared in 2017 and was a finalist for the Man Booker Prize. Hamid writes for dozens of magazines, journals, and newspapers, including The New York Times, The New Yorker, and The Paris Review.
Get the entire Exit West LitChart as a printable PDF.
"My students can't get enough of your charts and their results have gone through the roof." -Graham S.
Download 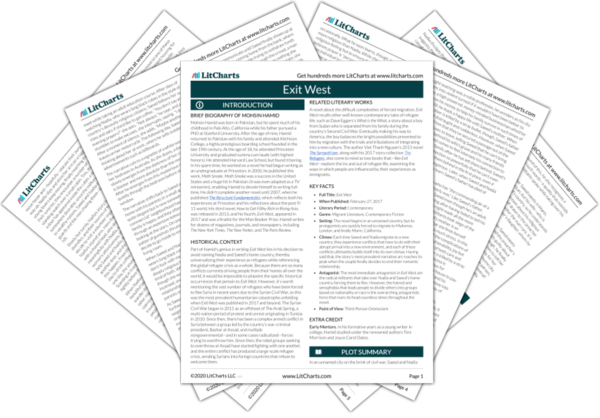 Part of Hamid’s genius in writing Exit West lies in his decision to avoid naming Nadia and Saeed’s home country, thereby universalizing their experience as refugees while referencing the global refugee crisis as a whole. Because there are so many conflicts currently driving people from their homes all over the world, it would be impossible to pinpoint the specific historical occurrences that pertain to Exit West. However, it’s worth mentioning the vast number of refugees who have been forced to flee Syria in recent years due to the Syrian Civil War, as this was the most prevalent humanitarian catastrophe unfolding when Exit West was published in 2017 and beyond. The Syrian Civil War began in 2011 as an offshoot of The Arab Spring, a multi-nation period of protest and unrest originating in Tunisia in 2010. Since then, there has been a complex armed conflict in Syria between a group led by the country’s war-criminal president, Bashar al-Assad, and multiple nongovernmental—and in some cases radicalized—forces trying to overthrow him. Since then, the rebel groups seeking to overthrow al-Assad have started fighting with one another, and the entire conflict has produced a large-scale refugee crisis, sending Syrians into foreign countries that refuse to welcome them.

Other Books Related to Exit West

A novel about the difficult complexities of forced migration, Exit West recalls other well-known contemporary tales of refugee life, such as Dave Eggers’s What is the What, a story about a boy from Sudan who is separated from his family during the country’s Second Civil War. Eventually making his way to America, the boy balances the bright possibilities presented to him by migration with the trials and tribulations of integrating into a new culture. The author Viet Thanh Nguyen’s 2015 novel The Sympathizer, along with his 2017 story collection The Refugees, also come to mind as two books that—like Exit West—explore the ins and out of refugee life, examining the ways in which people are influenced by their experiences as immigrants.
Key Facts about Exit West

Early Mentors. In his formative years as a young writer in college, Hamid studied under the renowned authors Toni Morrison and Joyce Carol Oates. 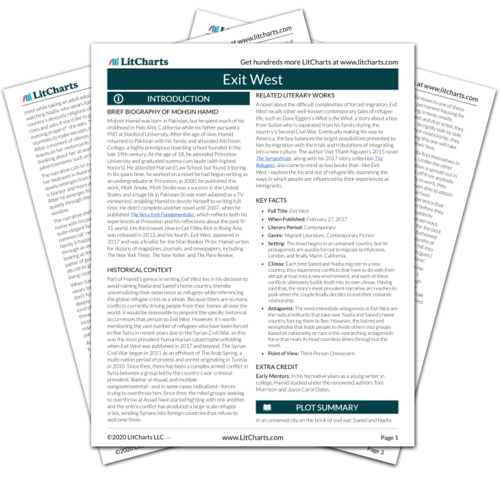 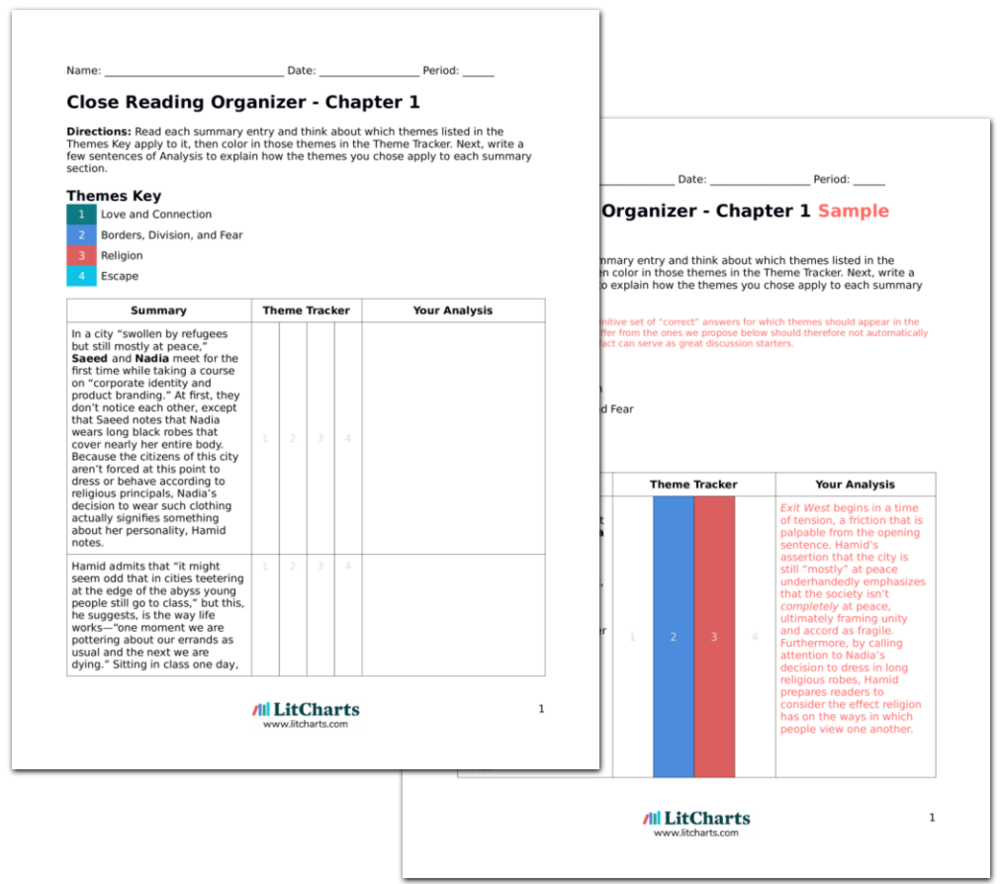