Download this LitChart! (PDF)
Teachers and parents! Struggling with distance learning? Our Teacher Edition on Experience can help.

Welcome to the LitCharts study guide on Ralph Waldo Emerson's Experience. Created by the original team behind SparkNotes, LitCharts are the world's best literature guides.

A concise biography of Ralph Waldo Emerson plus historical and literary context for Experience.

A quick-reference summary: Experience on a single page.

In-depth summary and analysis of every of Experience. Visual theme-tracking, too.

Explanations of Experience's symbols, and tracking of where they appear.

An interactive data visualization of Experience's plot and themes.

Ralph Waldo Emerson was one of the most influential American writers and philosophers of the 19th century. His father, a descendant of the Puritans, was a Unitarian pastor, and his mother was a devout Anglican. It was perhaps inevitable, then, that Emerson gravitated toward divinity: after graduating from Harvard College in 1821, and studying at Harvard Divinity School, he was ordained as a Unitarian minister at Boston’s Second Church in 1829. His young wife’s early death from tuberculosis in 1831 drove him to question his Christian faith and eventually to leave the ministry in 1832. He traveled to Europe, meeting many of the leading thinkers and artists of the era, including Coleridge, Wordsworth, and Thomas Carlyle. In 1834, Emerson took up permanent residence in Concord, Massachusetts, which would be his home for the rest of his life. Soon after, in 1836, he published Nature, his philosophical manifesto and a core text for the movement that would form around him, called Transcendentalism, which emphasized the mysterious presence of the divine in nature. In 1840, he helped Margaret Fuller and others found The Dial, a Transcendentalist journal, and in 1841 and 1844, respectively, he collected and published two volumes, or “series,” of his Essays; “Experience” was published in the second series. Throughout the following decades, Emerson enjoyed widespread literary fame and traveled across the country delivering lectures. By the time of his death, in 1883, he was known as the Sage of Concord, canonized—perhaps somewhat ironically, for someone who began as a radical—among the greats personalities of American culture.
Get the entire Experience LitChart as a printable PDF.
"My students can't get enough of your charts and their results have gone through the roof." -Graham S.
Download it! 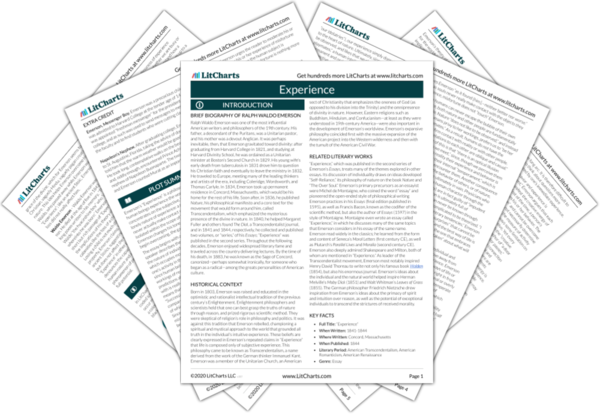 Born in 1803, Emerson was raised and educated in the optimistic and rationalist intellectual tradition of the previous century’s Enlightenment. Enlightenment philosophers and scientists held that one can best grasp the truths of nature through reason, and prized rigorous scientific method. They were skeptical of religion’s role in philosophy and politics. It was against this tradition that Emerson rebelled, championing a spiritual and mystical approach to the world that grounded all truth in the individual’s intuitive experience. These beliefs are clearly expressed in Emerson’s repeated claims in “Experience” that life is composed only of subjective experience. This philosophy came to be known as Transcendentalism, a name derived from the work of the German thinker Immanuel Kant. Emerson was a member of the Unitarian Church, an American sect of Christianity that emphasizes the oneness of God (as opposed to his division into the Trinity) and the omnipresence of divinity in nature. However, Eastern religions such as Buddhism, Hinduism, and Confucianism—at least as they were understood in 19th-century America—were also important in the development of Emerson’s worldview. Emerson’s expansive philosophy coincided first with the massive expansion of the American project into the Western wilderness and then with the tumult of the American Civil War.

Other Books Related to Experience

“Experience,” which was published in the second series of Emerson’s Essays, treats many of the themes explored in other essays. Its discussion of individuality draws on ideas developed “Self-Reliance,” its philosophy of nature on the book Nature and “The Over Soul.” Emerson’s primary precursors as an essayist were Michel de Montaigne, who coined the word “essay” and pioneered the open-ended style of philosophical writing Emerson practices in his Essays (final edition published in 1595), as well as Francis Bacon, known as the codifier of the scientific method, but also the author of Essays (1597) in the style of Montaigne. Montaigne even wrote an essay called “Experience,” in which he discusses many of the same topics that Emerson considers in his essay of the same name. Emerson read widely in the classics; he learned from the form and content of Seneca’s Moral Letters (first century CE), as well as Plutarch’s Parallel Lives and Moralia (second century CE). Emerson also deeply admired Shakespeare and Milton, both of whom are mentioned in “Experience.” As leader of the Transcendentalist movement, Emerson most notably inspired Henry David Thoreau to write not only his famous book Walden (1854), but also his enormous journal. Emerson’s ideas about the individual and the natural world helped inspire Herman Melville’s Moby Dick (1851) and Walt Whitman’s Leaves of Grass (1855). The German philosopher Friedrich Nietzsche drew inspiration from Emerson’s ideas about the primacy of spirit and intuition over reason, as well as the potential of exceptional individuals to transcend the strictures of received morality.
Key Facts about Experience

Emerson, Messenger Boy. Emerson was a precocious child and was admitted to Harvard College at the tender age of 14 He was appointed “freshman messenger” for the president of the college, and as such was used to send messages to members of the faculty and to find students who were cutting class.

Napoleon’s Nephew. After graduating college, Emerson moved to St. Augustine, Florida, taking the advice of doctors who had told him that the warm weather would be good for his health. He took long, contemplative walks on the beach, wrote poetry, and, oddly enough, encountered Prince Achille Murat, the nephew of Napoleon Buonaparte. The two became fast friends, and Emerson counted Murat as an important influence. 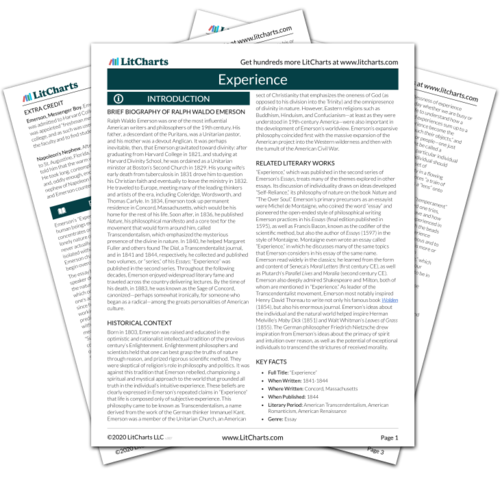 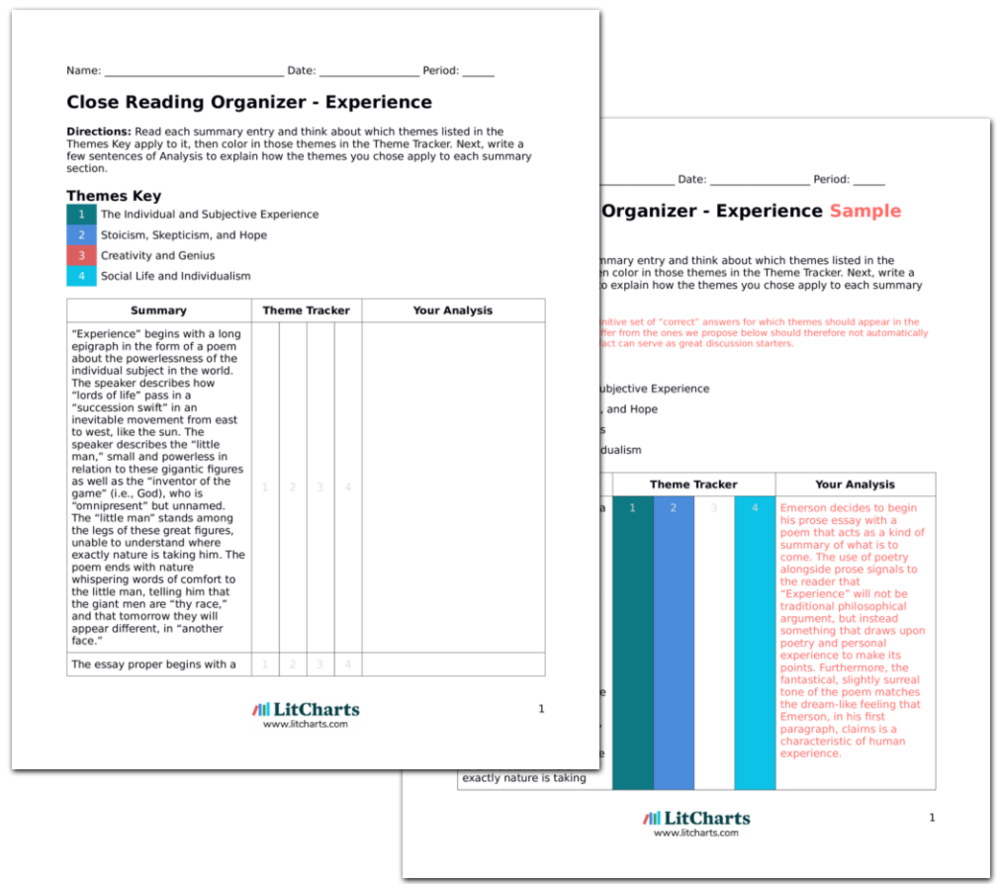