Download this LitChart! (PDF)
Teachers and parents! Struggling with distance learning? Our Teacher Edition on Fahrenheit 451 can help.

Get LitCharts A+
LitCharts assigns a color and icon to each theme in Fahrenheit 451, which you can use to track the themes throughout the work.

Much of Fahrenheit 451 is devoted to depicting a future United States society bombarded with messages and imagery by an omnipresent mass media. Instead of the small black-and-white TV screens common in American households in 1953 (the year of the book's publication), the characters in the novel live their lives in rooms with entire walls that act as televisions. These TVs show serial dramas in which the viewer's name is woven into the program and the viewer is able to interact with fictional characters called "the relatives" or "the family." Scenes change rapidly, images flash quickly in bright colors, all of it designed to produce distraction and fascination. When not in their interactive TV rooms, many characters, including Guy Montag's wife Mildred, spend much of their time with "Seashell ear thimbles" in their ears—miniature radio receivers that play constant broadcasts of news, advertisements, and music, drowning out the real sounds of the world.

Throughout the novel, Bradbury portrays mass media as a veil that obscures real experience and interferes with the characters' ability to think deeply about their lives and societal issues. Bradbury isn't suggesting that media other than books couldn't be enriching and fulfilling. As Faber tells Montag, "It isn't books you need, it's some of the things that once were in books.... The same infinite detail and awareness could be projected through the radios and televisors, but are not." In an interview marking the fiftieth anniversary of the novel's publication, Bradbury indicated that some of his fears about mass media had been realized. "We bombard people with sensation," he said, "That substitutes for thinking."

The ThemeTracker below shows where, and to what degree, the theme of Mass Media appears in each chapter of Fahrenheit 451. Click or tap on any chapter to read its Summary & Analysis.
How often theme appears:
chapter length:
Chapter
Part 1
1
Part 2
2
Part 3
3
Get the entire Fahrenheit 451 LitChart as a printable PDF.
"My students can't get enough of your charts and their results have gone through the roof." -Graham S.
Download 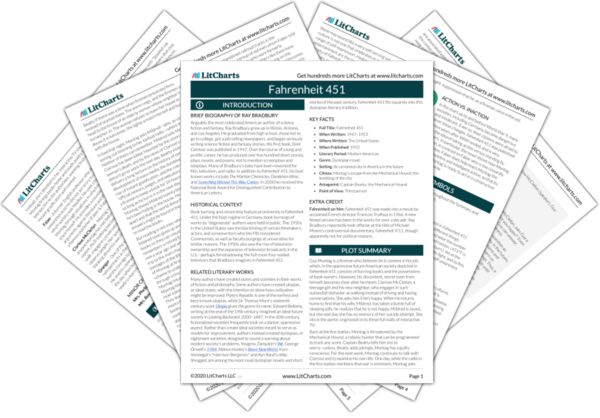 Below you will find the important quotes in Fahrenheit 451 related to the theme of Mass Media.
Part 1 Quotes
"Speed up the film, Montag, quick... Uh! Bang! Smack! Wallop, Bing, Bong, Boom! Digest-digests, digest-digest-digests. Politics? One column, two sentences, a headline!... Whirl man's mind around about so fast under the pumping hands of publishers, exploiters, broadcasters that the centrifuge flings off all unnecessary, time-wasting thought!"
Related Characters: Captain Beatty (speaker), Guy Montag
Related Themes:

"Bigger the population, the more minorities. Don't step on the toes of the dog lovers, the cat lovers, doctors, lawyers, merchants, chiefs, Mormons, Baptists, Unitarians, second-generation Chinese, Swedes, Italians, Germans, Texans, Brooklynites, Irishmen, people from Oregon or Mexico. The people in this book, this play, this TV serial are not meant to represent any actual painters, cartographers, mechanics anywhere. The bigger your market, Montag, the less you handle controversy, remember that!... Authors, full of evil thoughts, lock up your typewriters. They did."
Related Characters: Captain Beatty (speaker), Guy Montag
Related Themes:

Unlock with LitCharts A+
Part 2 Quotes
"It's not books you need, it's some of the things that once were it books....The same infinite detail and awareness could be projected through radios and televisors, but are not."
Related Characters: Faber (speaker)
Related Themes: