Eric Schlosser’s Fast Food Nation is an attempt to describe how American eating and food-production patterns have changed since World War Two. Schlosser charts this transformation by tracking many different people: fast-food employees at franchises, and well-paid executives at fast-food conglomerates; ranchers and potato farmers in Colorado and its environs; large-scale farming and ranching operations; workers at meatpacking plants; food scientists tasked with creating new “natural” flavors for food products.

Schlosser begins by noting the emergence of major American fast-food companies, like McDonald’s (with its Golden Arches), Burger King, and Wendy’s, after World War Two. The explosive growth of many of these chains was coupled with the expansion of the American suburbs, especially in California, as soldiers returned from the war and began settling with their families in car-based communities, along highways between major cities. McDonald’s “speedee service system,” a way of making burgers more efficiently and with little skill on the part of employees, marked, as Schlosser writes, a series of sweeping changes in fast food, causing it to become ubiquitous in America. Increasing mechanization of fast-food production in the 1960s and ‘70s ensured that companies could easily replace fast-food workers—that these workers would be a transitional workforce, employed nationwide without union benefits.

Schlosser writes that most fast-food companies make the bulk of their profits from the “franchise” system, wherein the conglomerate is actually the landlord for the franchisor, who “rents” the brand. Schlosser tracks the lives of fast-food employees, franchise owners, and fast-food company executives, then shifts his attention to the meat and potato economies north of Colorado, in Wyoming, Idaho, and its environs. Schlosser describes the lives of small-time, independent ranchers, and the changes in large-scale ranching that have made independent farming so difficult, almost impossible, economically. Schlosser then moves to later stages of the beef and chicken production “systems” throughout the country, which, like fast-food production itself, has come increasingly to rely on unskilled labor (without union protections) and mechanized processes, often at dizzying and unsafe speeds.

Indeed, for Schlosser, safety and hygiene become important issues for consumers. Large-scale meat and poultry plants often allow fecal matter to contaminate animal food sources—this has led to outbreaks of Salmonella, E. coli, and other viral and bacterial contagions throughout the food supply. But Schlosser laments, too, the patterns of “deregulation” (often spearheaded by Republican groups in Congress) that have kept government agencies like OSHA and the USDA from adequately keeping track of the dangers to consumers, and plant-workers, in the meat-packing and food-service industries.

Schlosser closes the book with two important messages. The first is that the “fast-food-ificiation” of eating habits is not simply an American phenomenon, but one that is becoming increasingly popular the world over, in Europe as well as Asia. The second is an appeal to reform. Schlosser argues that, although many of the factors and processes he depicts in the book seem bleak and unchangeable—dictated by corporate interests with deep pockets—he notes that consumers don’t have to buy fast food at all. Even by selectively boycotting certain fast-food and food-production practices, and by learning more about the manner in which their food is caught, cooked, and distributed, consumers can help improve those patterns. Fast food can be made more healthy for consumers, and more economically viable for independent owners; food production can be made safer for workers in plants across the US and the globe. Schlosser writes that these changes, ultimately, begin with us—the readers. 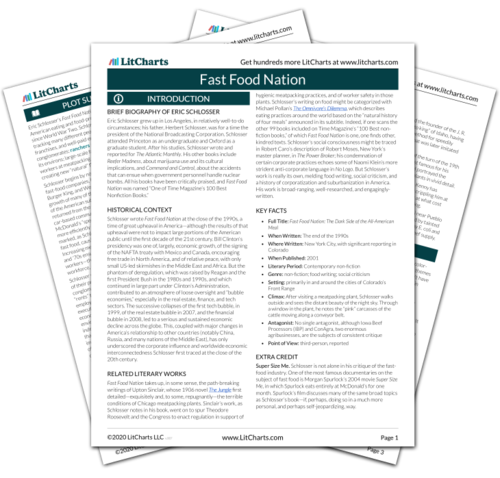 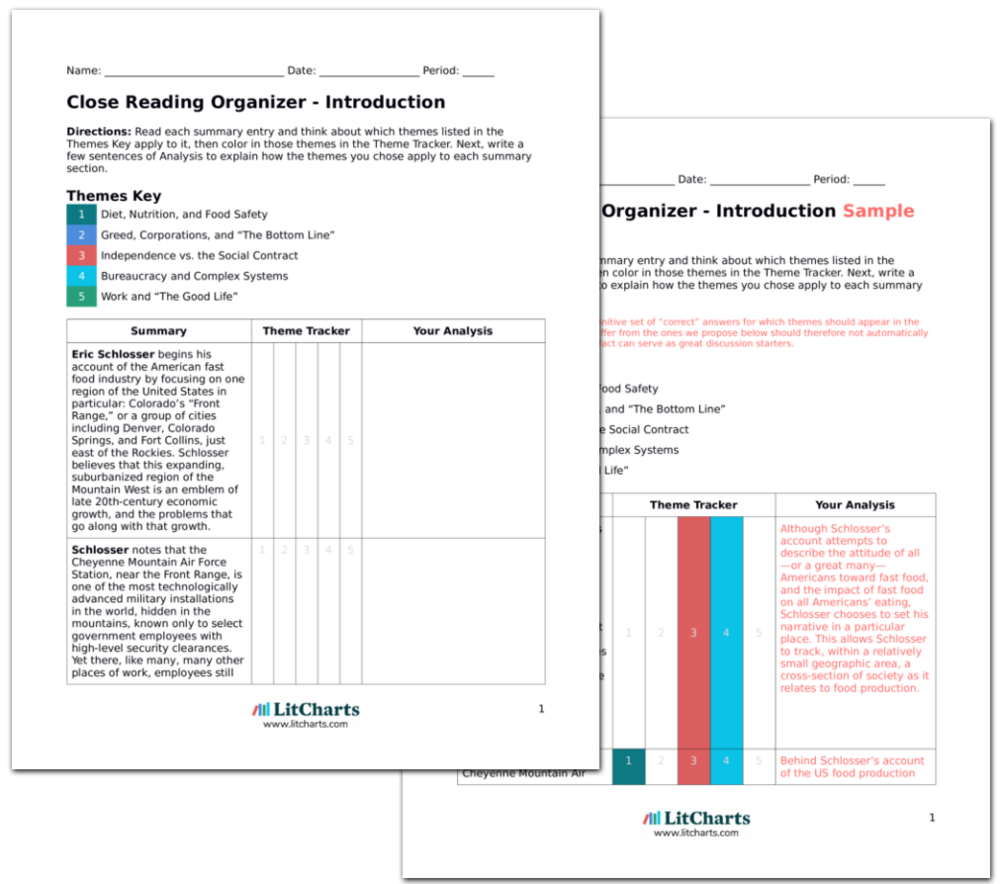