Upgrade to A+
Introduction
Plot Summary
Detailed Summary
& Analysis
Themes
Quotes
Characters
Terms
Symbols
Theme Wheel
LitCharts assigns a color and icon to each theme in Fear and Loathing in Las Vegas, which you can use to track the themes throughout the work.

Duke makes repeated references to Horatio Alger, an American writer from the 1800s whose rags-to-riches stories are often cited as examples of the American Dream, and these references reflect Duke’s own understanding of the concept. Duke suggests that the American Dream is inherently capitalist, and when he finds out his magazine is sending him to Vegas he responds excitedly, “Free Enterprise. The American Dream. Horatio Alger gone mad on drugs in Las Vegas.” Even though Duke modifies the American Dream a bit—that is, he adds drugs—the premise is still the same: hard work plus luck equals success in America. After Duke and Dr. Gonzo run up a massive hotel bill they can’t pay, Dr. Gonzo runs back to L.A. and Duke fears his search is dead in the water. “How would Horatio Alger handle this situation?” Duke wonders. He answers with “panic,” and runs off, abandoning the bill but not the American Dream. As Duke runs from his debt, he decides to hide in plain sight. He goes to a different hotel and switches cars to be less conspicuous. “Register at the Flamingo and have the White Caddy sent over at once. Do it right; remember Horatio Alger.” Even when the chips are down, Duke doesn’t abandon his search. Though his words certainly contain a level of irony, on some level he believes, just as Alger did, that success in America comes to those who work for it.

Duke’s editor later finds a recording of an interview of sorts between Duke and the staff of a North Vegas diner, the “rationale” for which “appears to be based on a feeling—shared by both Duke and his attorney—that the American Dream” is somewhere in Las Vegas. When Duke and Dr. Gonzo ask where they can find the American Dream, the diner’s cook, Lou, assumes they are referring to the “Old Psychiatrist’s Club,” a discotheque in Vegas. “Or,” questions Lou, “did somebody just send you on a goose chase?” Lou’s reference to the American Dream as “a goose chase” implies that Duke and Dr. Gonzo are looking for something that doesn’t exist and therefore can’t be found. According to Lou, the “Old Psychiatrist’s Club” is a hangout for “a bunch of pushers, peddlers, upper and downers,” and is full of “twenty-four-hour-a-day violence.” Lou’s description harkens to the failed counterculture and the attempts of a generation to find the American Dream in a country and society they were fundamentally at odds with. Lou says the disco is “completely remodeling,” which suggests a need to reinvent the American Dream to better accommodate this new and different generation. When Duke and Gonzo finally find the disco, however, it is a “huge slab of cracked, scorched concrete in a vacant lot full of tall weeds,” and the locals claim the club “burned down about three years ago.” In this way, Thompson implies that the American Dream is dead and had gone out with the counterculture, who took with them the belief that America can do better.

Ultimately, Duke only finds an example of the American Dream at Circus-Circus, a loud and crowded casino in Vegas. The owner had dreamed as a child of running away with the circus, and “now the bastard has his own circus, and a license to steal, too.” This realization underscores the harsh truths of the American Dream—the odds are always in favor of the house and only certain already-privileged Americans are taken seriously as players at the table. Fear and Loathing in Las Vegas is Thompson’s attempt to redefine the American Dream, which he implies by extension is in need of “complete remodeling” as well. 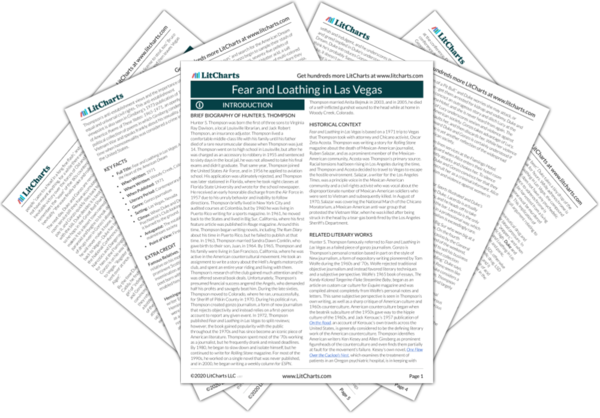 The American Dream Quotes in Fear and Loathing in Las Vegas

Below you will find the important quotes in Fear and Loathing in Las Vegas related to the theme of The American Dream.
Part 1, Chapter 1 Quotes

The sporting editors had also given me $300 in cash, most of which was already spent on extremely dangerous drugs. The trunk of the car looked like a mobile police narcotics lab. We had two bags of grass, seventy-five pellets of mescaline, five sheets of high-powered blotter acid, a salt shaker half full of cocaine, and a whole galaxy of multi-colored uppers, downers, screamers, laughers . . . and also a quart of tequila, a quart of rum, a case of Budweiser, a pint of raw ether and two dozen amyls.

Unlock explanations and citation info for this and every other Fear and Loathing in Las Vegas quote.

“You Samoans are all the same,” I told him. “You have no faith in the essential decency of the white man’s culture. Jesus, just one hour ago we were sitting over there in that stinking baiginio, stone broke and paralyzed for the weekend, when a call comes through from some total stranger in New York, telling me to go to Las Vegas and expenses be damned—and then he sends me over to some office in Beverly Hills where another total stranger gives me $300 raw cash for no reason at all . . . I tell you, my man, this is the American Dream in action! We’d be fools not to ride this strange torpedo all the way out to the end.”

The Circus-Circus is what the whole hep world would be doing on Saturday night if the Nazis had won the war. This is the Sixth Reich. The ground floor is full of gambling tables, like all the other casinos . . . but the place is about four stories high, in the style of a circus tent, and all manner of strange County-Fair/Polish Carnival madness is going on up in this space.

Yes, I would go back to Vegas. Slip the Kid and confound the CHP by moving East again, instead of West. This would be the shrewdest move of my life. Back to Vegas and sign up for the Drugs and Narcotics conference; me and a thousand pigs. Why not? Move confidently into their midst. Register at the Flamingo and have the White Caddy sent over at once. Do it right; remember Horatio Alger. . .

They called up the white Coupe de Ville at once. Everything was automatic. I could sit in the red-leather driver’s seat and make every inch of the car jump, by touching the proper buttons. It was a wonderful machine: Ten grand worth of gimmicks and high-priced Special Effects. The rear windows leaped up with a touch, like frogs in a dynamite pond. The white canvas top ran up and down like a rollercoaster. The dashboard was full of esoteric lights & dials & meters that I would never understand—but there was no doubt in my mind that I was into a superior machine.

This is Nevada’s answer to East St. Louis—a slum and a graveyard, last stop before permanent exile to Ely or Winnemucca. North Vegas is where you go if you’re a hooker turning forty and the syndicate men on the Strip decide you’re no longer much good for business out there with the high rollers . . . or if you’re a pimp with bad credit at the Sands . . . or what they still call, in Vegas, “a hophead.” This can mean almost anything from a mean drunk to a junkie, but in terms of commercial acceptability, it means you’re finished in all the right places.

The “high side” of Vegas is probably the most closed society west of Sicily—and it makes no difference, in terms of the day to day life-style of the place, whether the Man at the Top is Lucky Luciano or Howard Hughes. In an economy where Tom Jones can make $75,000 a week for two shows a night at Caesar’s, the palace guard is indispensable, and they don’t care who signs their paychecks. A gold mine like Vegas breeds its own army, like any other gold mine. Hired muscle tends to accumulate in fast layers around money/power poles . . . and big money, in Vegas, is synonymous with the Power to protect it.

“You found the American Dream?” he said. “In this town?” I nodded. “We’re sitting on the main nerve right now,” I said. “You remember that story the manager told us about the owner of this place? How he always wanted to run away and join the circus when he was a kid?” Bruce ordered two more beers. He looked over the casino for a moment, then shrugged. “Yeah, I see what you mean,” he said. “Now the bastard has his own circus, and a license to steal, too.” He nodded. “You’re right—he’s the model.” “Absolutely,” I said. “It’s pure Horatio Alger, all the way down to his attitude.” 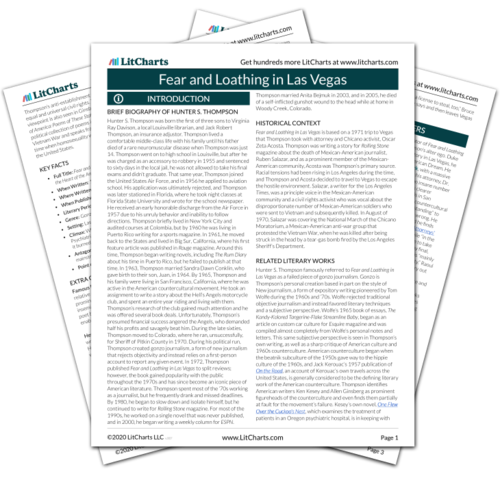 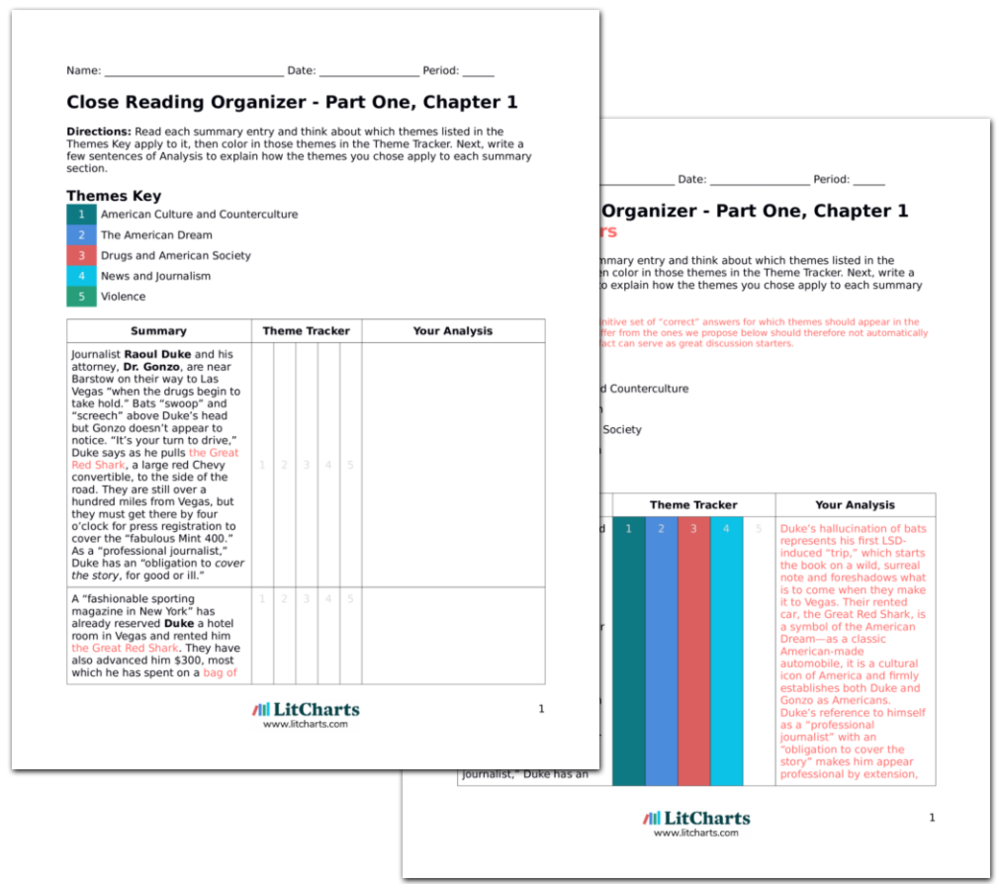