Download this LitChart! (PDF)
Teachers and parents! Struggling with distance learning? Our Teacher Edition on Fear and Trembling can help.

Welcome to the LitCharts study guide on Søren Kierkegaard's Fear and Trembling. Created by the original team behind SparkNotes, LitCharts are the world's best literature guides.

A concise biography of Søren Kierkegaard plus historical and literary context for Fear and Trembling.

A quick-reference summary: Fear and Trembling on a single page.

In-depth summary and analysis of every chapter of Fear and Trembling. Visual theme-tracking, too.

Explanations, analysis, and visualizations of Fear and Trembling's themes.

Description, analysis, and timelines for Fear and Trembling's characters.

Explanations of Fear and Trembling's symbols, and tracking of where they appear.

An interactive data visualization of Fear and Trembling's plot and themes.

Søren Aabye Kierkegaard was the youngest of seven children born to Ane Sørensdatter Lund and Michael Pedersen Kierkegaard. Michael was a wealthy merchant, and Ane had been the family maid before Michael impregnated and then married her. Kierkegaard developed an early love of philosophy and took particular pleasure in reading Plato’s Socratic dialogues. Kierkegaard attended the University of Copenhagen, initially studying theology but later turning his attention to literature and philosophy. During this period, Kierkegaard struggled to find a truth or idea that he could live his life by, which led to his disillusionment with Christianity and a separation from his father. However, Kierkegaard reconciled himself to both and eventually graduated from the University of Copenhagen in 1841. Kierkegaard devoted the next few years to writing and publishing different essays under different synonyms, some of which include Johannes de silentio, Anti-Climacus, Judge William, and Hilarius Bookbinder. Occasionally, Kierkegaard would publish one essay with one pseudonym and then write a contradicting essay under another pseudonym, thereby presenting two different opinions of the same topic. Kierkegaard became a somewhat controversial figure after challenging a popular satirical paper, The Corsair, to mock him (it did, and Kierkegaard never quite recovered from the public humiliation) and railing against the Danish national church (which was Lutheran) for being too lenient. In October 1855, Kierkegaard collapsed in the street and then died a few weeks later in November. There is some debate over whether he died of tuberculosis or a spinal disease. Although Kierkegaard was relatively well-known in Denmark during his lifetime, it wasn’t until the early- to mid-20th century that his works really began receiving international attention. Today, Kierkegaard is known as the “father of existentialism.”
Get the entire Fear and Trembling LitChart as a printable PDF.
"My students can't get enough of your charts and their results have gone through the roof." -Graham S.
Download 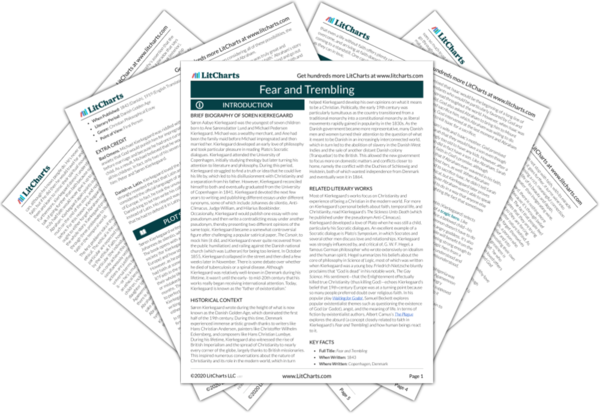 Historical Context of Fear and Trembling

Søren Kierkegaard wrote during the height of what is now known as the Danish Golden Age, which dominated the first half of the 19th century. During this time, Denmark experienced immense artistic growth thanks to writers like Hans Christian Andersen, painters like Christoffer Wilhelm Eckersberg, and composers like Hans Christian Lumbye. During his lifetime, Kierkegaard also witnessed the rise of British Imperialism and the spread of Christianity to nearly every corner of the globe, largely thanks to British missionaries. This inspired numerous conversations about the nature of Christianity and its role in the modern world, which in turn helped Kierkegaard develop his own opinions on what it means to be a Christian. Politically, the early 19th century was particularly tumultuous as the country transitioned from a traditional monarchy into a constitutional monarchy as liberal movements rapidly gained in popularity in the 1830s. As the Danish government became more representative, many Danish men and women turned their attention to the question of what it meant to be Danish in an increasingly interconnected world, which in turn led to the abolition of slavery in the Danish West Indies and the sale of another distant Danish colony (Tranquebar) to the British. This allowed the new government to focus more on domestic matters and conflicts closer to home, namely the conflict with the Duchies of Schleswig and Holstein, both of which wanted independence from Denmark and eventually won it in 1864.

Other Books Related to Fear and Trembling

Most of Kierkegaard’s works focus on Christianity and experience of being a Christian in the modern world. For more on Kierkegaard’s personal beliefs about faith, temporal life, and Christianity, read Kierkegaard’s The Sickness Unto Death (which he published under the pseudonym Anti-Climacus). Kierkegaard developed a love of Plato when he was still a child, particularly his Socratic dialogues. An excellent example of a Socratic dialogue is Plato’s Symposium, in which Socrates and several other men discuss love and relationships. Kierkegaard was strongly influenced by, and critical of, G. W. F. Hegel, a famous German philosopher who wrote extensively on idealism and the human spirit. Hegel summarizes his beliefs about the core of philosophy in Science of Logic, most of which was written when Kierkegaard was a young boy. Friedrich Nietzsche bluntly proclaims that “God is dead” in his notable work, The Gay Science. His sentiment—that the Enlightenment effectually killed true Christianity (thus killing God)—echoes Kierkegaard’s belief that 19th-century Europe was at a turning point because so many people preferred doubt over religious faith. In his popular play Waiting for Godot, Samuel Beckett explores popular existentialist themes such as questioning the existence of God (or Godot), angst, and the meaning of life. In terms of fiction by existentialist authors, Albert Camus’s The Plague explores the absurd (a concept closely related to faith in Kierkegaard’s Fear and Trembling) and how human beings react to it.
Key Facts about Fear and Trembling

Extra Credit for Fear and Trembling

Bad Omens. Michael Kierkegaard was riddled with fear and anxiety that God would punish him for impregnating his wife before marriage and because he had once cursed God as a child. As a result, Michael believed that he would have to bury all his children. In fact, only two of his seven children survived him: Peter and Søren Kierkegaard.

Danish vs. Latin. Kierkegaard loved the Danish language and strongly resented the fact that Latin and German were considered the official languages of academia throughout most of Europe. In fact, he took the unusual step of petitioning the Danish king to let him write his college dissertation in Danish instead of Latin. His request was granted, but with the caveat that he had to defend it in Latin. 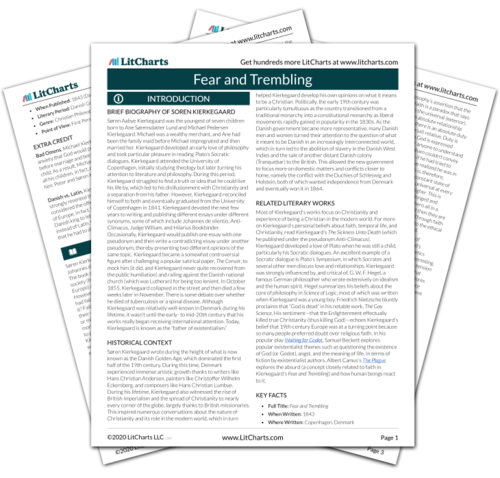 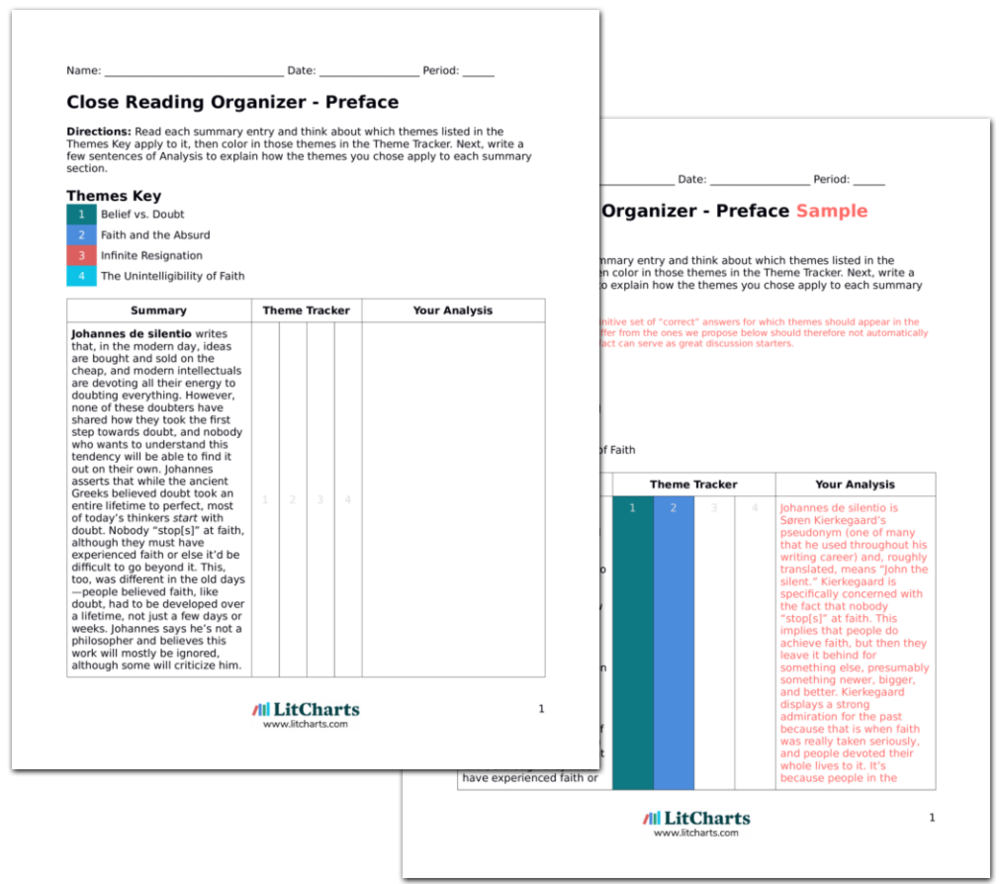