Download this LitChart! (PDF)
Teachers and parents! Struggling with distance learning? Our Teacher Edition on Fever 1793 can help.

Welcome to the LitCharts study guide on Laurie Halse Anderson's Fever 1793. Created by the original team behind SparkNotes, LitCharts are the world's best literature guides.

A concise biography of Laurie Halse Anderson plus historical and literary context for Fever 1793.

A quick-reference summary: Fever 1793 on a single page.

In-depth summary and analysis of every chapter of Fever 1793. Visual theme-tracking, too.

Explanations of Fever 1793's symbols, and tracking of where they appear.

An interactive data visualization of Fever 1793's plot and themes.

Laurie Halse is the daughter of the Rev. Frank A. Halse, Jr., and Joyce Holcomb Halse. She grew up in Potsdam, New York, along with her younger sister, and attended high school outside of Syracuse. She has enjoyed writing since second grade. As a teenager, Halse spent a year living in Denmark as an exchange student. She graduated from Georgetown University in 1984. Early in her career, she worked at the Philadelphia Inquirer. She began writing children’s and young adult novels in the 1990s. Halse had two daughters, Stephanie and Meredith, with her first husband, Greg Anderson. Since 2004, she has been married to her childhood sweetheart, Scot Larrabee. Anderson is best known for her award-winning 1999 novel, Speak, which features a teenage girl who is dealing with the aftermath of a sexual assault. In addition to Fever 1793, she has authored a trilogy of young adult historical novels called Seeds of America. Her awards include the American Library Association’s Margaret A. Edwards Award and the Scott O’Dell Award for Historical Fiction.
Get the entire Fever 1793 LitChart as a printable PDF.
"My students can't get enough of your charts and their results have gone through the roof." -Graham S.
Download 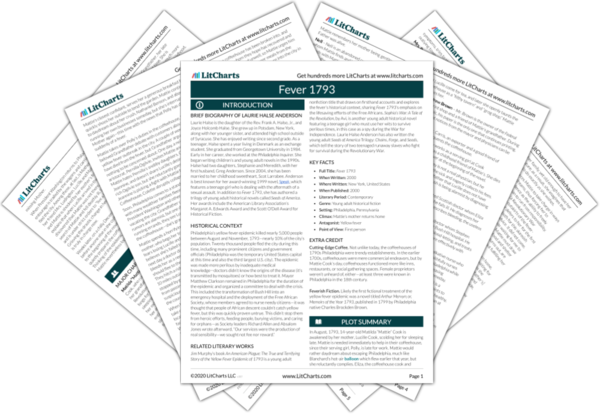 Philadelphia’s yellow fever epidemic killed nearly 5,000 people between August and November, 1793—nearly 10% of the city’s population. Twenty thousand people fled the city during this time, including many prominent citizens and government officials (Philadelphia was the temporary United States capital at this time and also the third largest U.S. city). The epidemic was made more perilous by inadequate medical knowledge—doctors didn’t know the origins of the disease (it’s transmitted by mosquitoes) or how best to treat it. Mayor Matthew Clarkson remained in Philadelphia for the duration of the epidemic and organized a committee to deal with the crisis. This included the transformation of Bush Hill into an emergency hospital and the deployment of the Free African Society, whose members agreed to nurse needy citizens—it was thought that people of African descent couldn’t catch yellow fever, but this was quickly proven untrue. This didn’t stop them from heroic efforts, feeding people, burying victims, and caring for orphans—as Society leaders Richard Allen and Absalom Jones wrote afterward, “Our services were the production of real sensibility—we sought not fee nor reward.”

Other Books Related to Fever 1793

Jim Murphy’s book An American Plague: The True and Terrifying Story of the Yellow Fever Epidemic of 1793 is a young adult nonfiction title that draws on firsthand accounts and explores the fever’s historical context, sharing Fever 1793’s emphasis on the lifesaving efforts of the Free Africans. Sophia’s War: A Tale of the Revolution, by Avi, is another young adult historical novel featuring a teenage girl who must use her wits to survive perilous times, in this case as a spy during the War for Independence. Laurie Halse Anderson has also written the young adult Seeds of America Trilogy: Chains, Forge, and Seeds, which tell the story of two teenaged runaway slaves who fight for survival during the Revolutionary War.
Key Facts about Fever 1793

Cutting-Edge Coffee. Not unlike today, the coffeehouses of 1790s Philadelphia were trendy establishments. In the earlier 1700s, coffeehouses were mere commercial endeavors, but by Mattie Cook’s day, coffeehouses functioned more like inns, restaurants, or social gathering spaces. Female proprietors weren’t unheard of, either—at least three were known in Philadelphia in the 18th century.

Feverish Fiction. Likely the first fictional treatment of the yellow fever epidemic was a novel titled Arthur Mervyn; or, Memoirs of the Year 1793, published in 1799 by Philadelphia native Charles Brockden Brown. 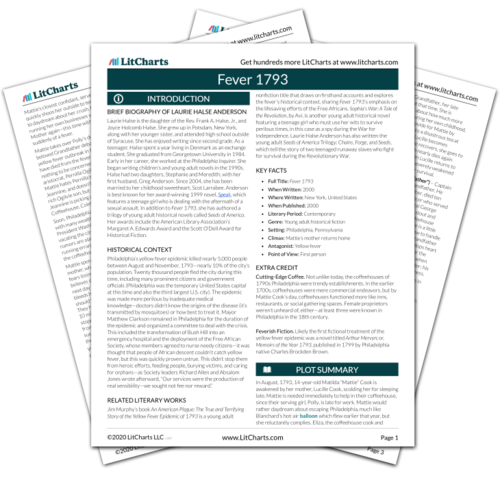 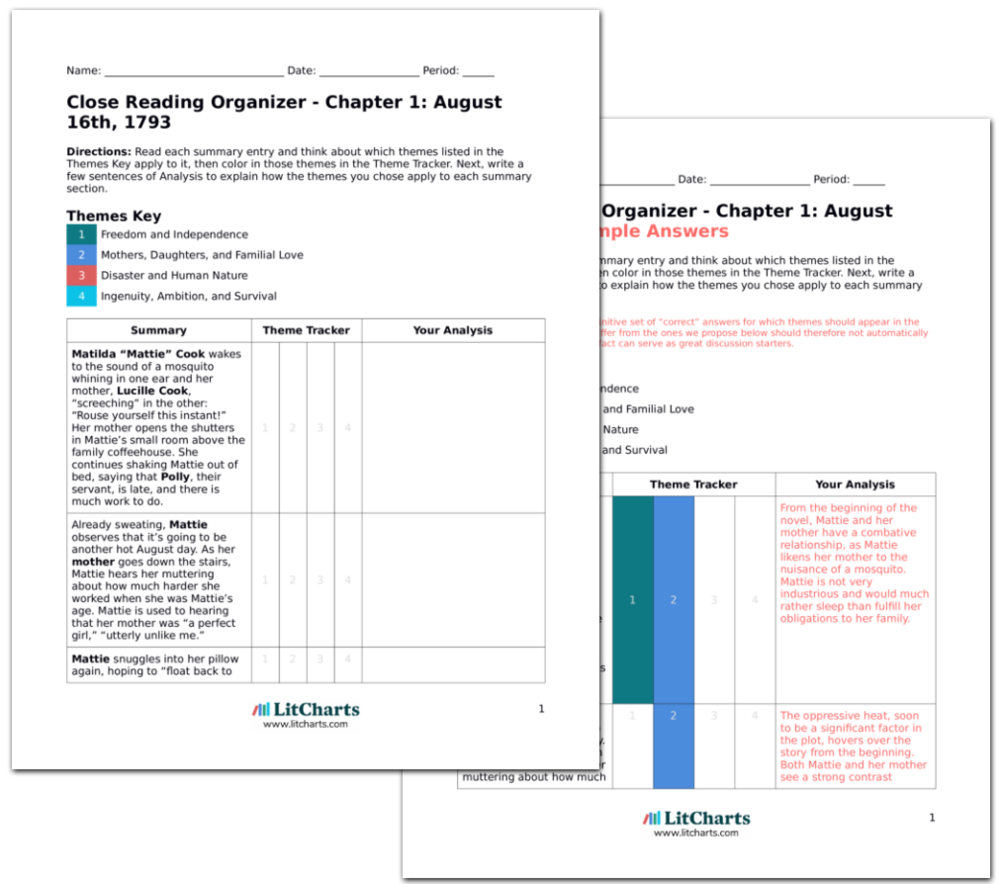