Download this LitChart! (PDF)
Teachers and parents! Struggling with distance learning? Our Teacher Edition on First Confession can help.

Welcome to the LitCharts study guide on Frank O’Connor's First Confession. Created by the original team behind SparkNotes, LitCharts are the world's best literature guides.

A concise biography of Frank O’Connor plus historical and literary context for First Confession.

A quick-reference summary: First Confession on a single page.

In-depth summary and analysis of every of First Confession. Visual theme-tracking, too.

Explanations of First Confession's symbols, and tracking of where they appear.

An interactive data visualization of First Confession's plot and themes.

Frank O’Connor was born and raised in Cork, Ireland. His father was often drunk and violent, while his mother worked hard for the family’s living and introduced her son to the work of Shakespeare and other poets and writers. O’Connor described spending his childhood in a dream from all the reading he did. At eighteen, he joined the Irish Civil War (1922-1923) on the side of the United Kingdom against the Free State separatists. Still, he rejected hardline politics and refused to shoot opposing soldiers when they were out with their girlfriends. Afterward, he worked as a librarian, a teacher and a theater director and befriended many of the famous Irish writers of his day, including William Butler Yeats. From 1950 till his death in 1966, he lived and taught writing in the United States, but maintained close ties with his native Ireland. While he is best known for his short stories, he also wrote plays, longer fiction, biography, history, poetry, memoirs, and translations from Irish into English. The Frank O’Connor International Short Story Award is named in his honor.
Get the entire First Confession LitChart as a printable PDF.
"My students can't get enough of your charts and their results have gone through the roof." -Graham S.
Download it! 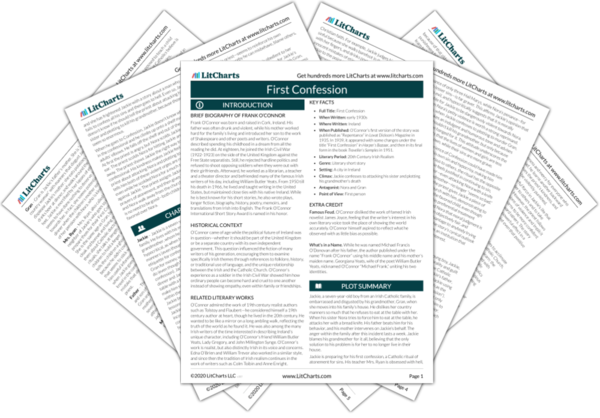 O’Connor came of age while the political future of Ireland was in question—whether it should be part of the United Kingdom or be a separate country with its own independent government. This question influenced the fiction of many writers of his generation, encouraging them to examine specifically Irish themes through references to folklore, history, or traditional use of language, and the unique relationship between the Irish and the Catholic Church. O’Connor’s experience as a soldier in the Irish Civil War showed him how ordinary people can become hard and cruel to one another instead of showing empathy, even within family or friendships.

Other Books Related to First Confession

O’Connor admired the work of 19th century realist authors such as Tolstoy and Flaubert—he considered himself a 19th century author at heart, though he lived in the 20th century. He wanted to be like a mirror on a long ambling walk, reflecting the truth of the world as he found it. He was also among the many Irish writers of the time interested in describing Ireland’s unique character, including O’Connor’s friend William Butler Yeats, Lady Gregory, and John Millington Synge. O’Connor’s work is realist, but also distinctly Irish in its voice and concerns. Edna O’Brien and William Trevor also worked in a similar style, and since then the tradition of Irish realism continues in the work of writers such as Colm Toibin and Anne Enright.
Key Facts about First Confession

Famous Feud. O’Connor disliked the work of famed Irish novelist James Joyce, feeling that the writer’s interest in his own literary voice took the place of showing the world accurately. O’Connor himself aspired to reflect what he observed with as little bias as possible.

What’s in a Name. While he was named Michael Francis O’Donovan after his father, the author published under the name “Frank O’Connor” using his middle name and his mother’s maiden name. Georgiana Yeats, wife of the poet William Butler Yeats, nicknamed O’Connor “Michael Frank,” uniting his two identities. 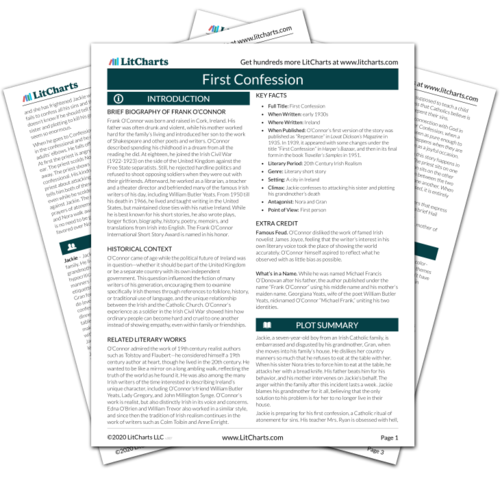 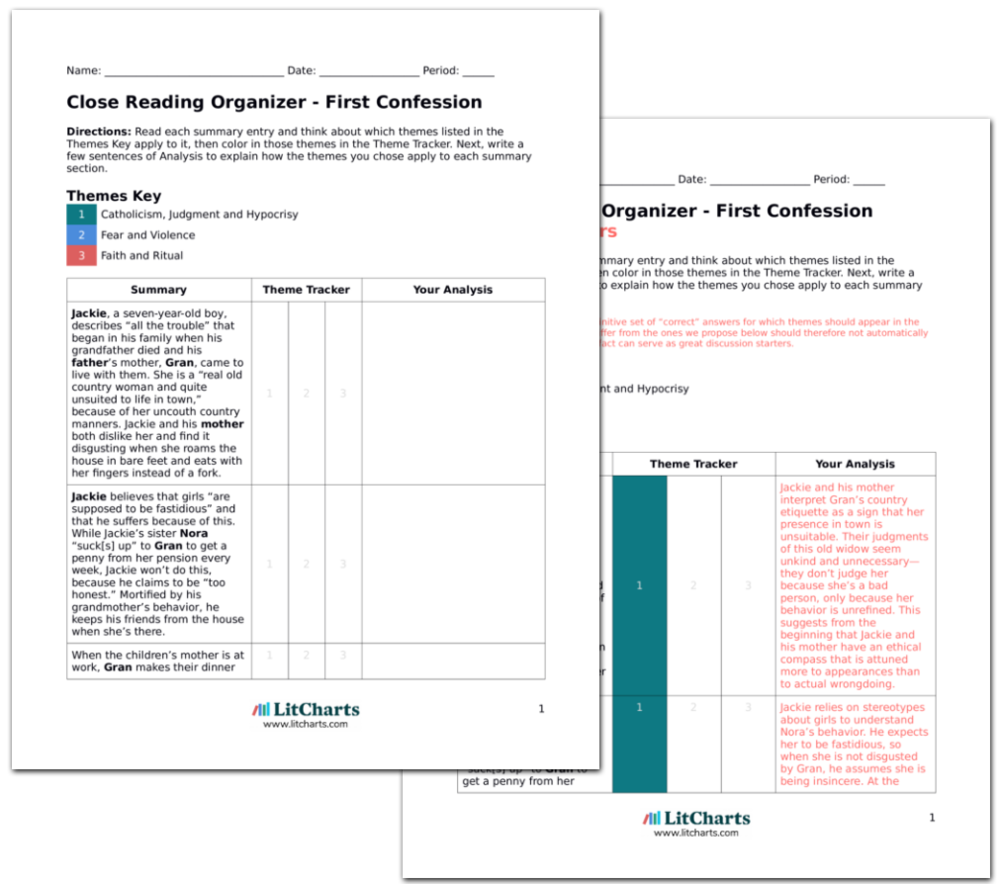