Download this LitChart! (PDF)
Teachers and parents! Struggling with distance learning? Our Teacher Edition on Flyboys can help.

Get LitCharts A+
LitCharts assigns a color and icon to each theme in Flyboys, which you can use to track the themes throughout the work.

The narrator and Clark are trying to build a plane, which seems—for both of them—like an attempt to escape the dreariness of their families. The narrator’s family is implied to be on the brink of divorce, while Clark’s home seems loveless and empty, and his mother has issues with anger. The plane’s symbolism itself is one of escape: it’s a machine on which they could fly away from their problems. But the actual process of designing and building it is another kind of escape, because they can immerse themselves in the project and forget their problems at home.

A source of strife between Clark and the narrator is that their mental escapes are very different. Clark is obsessively rational, pragmatic, and closed-off, while the narrator is imaginative, passionate, and creative. The narrator is the idea man, whereas Clark is the workhorse, burying himself in logistics and details. The narrator knows that his own imaginative nature hasn’t helped him escape the strife of his family, and his friendship with Clark seems to be based not on any particular affection between the boys, but on his subconscious belief that Clark’s rationality has allowed him to escape family strife. (The narrator falsely believes that Clark’s family is perfect.) Perhaps the narrator thinks that surrounding himself with rationality might help him escape, too.

But the narrator is wrong that rationality is a way to escape emotion and strife—the story’s ending reveals that Clark’s family is troubled, too. Neither rationality nor imagination can allow someone to fully escape a difficult reality. There’s no implied solution, but it’s meaningful that the only time in the story when the narrator experiences true joy is with his former friend, Freddy, who embraces the narrator’s imaginative, creative side. When the boys tell stories and play language games with idioms, the narrator seems finally happy and at ease. And while he doesn’t choose to remain friends with Freddy, his logic seems faulty—his most credible “escape” from the bad feelings of his family life isn’t enduring a joyless friendship with Clark, but embracing the moments of real happiness he feels with Freddy, even as they also bring pain.

The ThemeTracker below shows where, and to what degree, the theme of Imagination, Rationality, and Escape appears in each chapter of Flyboys. Click or tap on any chapter to read its Summary & Analysis.
How often theme appears:
chapter length:
Chapter
Flyboys
Get the entire Flyboys LitChart as a printable PDF.
"My students can't get enough of your charts and their results have gone through the roof." -Graham S.
Download 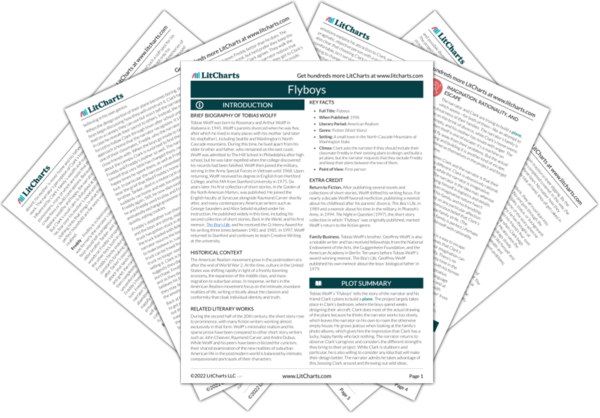 Below you will find the important quotes in Flyboys related to the theme of Imagination, Rationality, and Escape.
Flyboys Quotes

I formed the habit of making myself a sandwich and settling back in the leather chair in the den, where I listened to old records and studied the family photo albums. They were lucky people, Clark’s parents, lucky and unsurprised by their luck. You could see in the pictures that they took it all in stride, the big spreads behind them, the boats and cars, and their relaxed handsome families who, it was clear, did not get laid off, or come down with migraines, or lock each other out of the houses. I pondered each picture as if it were a door I might enter, until something turned in me and I grew irritable. Then I put the albums away and went back to Clark’s room to inspect his work and demand revisions.

Clark was stubborn but there was no meanness in him. He wouldn’t turn on you; he was the same one day as the next, earnest and practical. Though his family had money and spent it freely, he wasn’t spoiled or interested in possessions except as instruments of his projects. In the eight or nine months we’d been friends we had shot two horror movies with his dad’s 8mm camera, built a catapult that worked so well his parents made us take it apart, and fashioned a monstrous, unsteerable sled out of a bed frame and five wooden skis we found in his neighbor’s trash.

They became an airplane, a jet—my jet. And through all the long run home I was in the cockpit, skimming sawtooth peaks, weaving through steep valleys, buzzing fishermen in the sound and tearing over the city in such a storm of flash and thunder that football games stopped in midplay, cheerleaders gaping up at me, legs still flexed under their plaid skirts.

Freddy lived at the dead end of the street. As Clark and I got closer I could hear the snarl of a chain saw from the woods behind the house. Freddy and I used to lose ourselves all day in there. I hung back while Clark went up to the house and knocked.

She turned to me, her eyes so sad I had to force myself not to look away. “I can’t get over how you’ve grown,” she said. “Freddy, hasn’t he grown?”

“By leaps and bounds,” I said, falling into our old game in spite of myself.

Clark looked back and forth between us.

It was grisly stuff, and he didn’t scrimp on details or try to hide his pleasure in them, or in the starchy phrases he’d picked up from whatever book he was reading. That was Freddy for you. Gentle as a lamb, but very big on Vikings and Aztecs and Genghis Khan and the Crusaders, all the great old disembowlers and eyeball gougers. So was I. It was an interest we shared. Clark listened, looking a little stunned.

This was a very unlucky family. Bats took over their attic. Their cars laid transmissions like eggs. They got caught switching license plates and dumping garbage illegally and owing back taxes, or at least Ivan did. Ivan was Freddy’s stepfather and a world of bad luck all by himself. He wasn’t vicious or evil, just full of cute ideas that got him in trouble and make things even worse than they already were…Tanker was the only one who could stand up to Ivan, and not just because he was bigger and more competent. Ivan had a soft spot for him. After the accident he took to his bed for almost a week, then vanished.

Sometimes she came out to offer us a sandwich and ask us questions about our day, but I wished she wouldn’t. I had never seen such sorrow; it appalled me. And I was even more appalled by her attempts to overcome it, because they so plainly, pathetically failed, and in failing opened up the view of a world I had only begun to suspect, where wounds did not heal, and things did not work out for the best.

Such panic…where did it come from? It couldn’t have been just the situation at Freddy’s. The shakiness of my own family was becoming more and more apparent. At the time I didn’t admit to this knowledge, not for a moment, but it was always there, lingering in the gut: a sourness of foreboding, a cramp of alarm at any sign of misfortune or weakness in others, as if such things were catching.

It was impossible to dig and keep your feet, especially as we got deeper, Finally I gave up and knelt down to work—I got more leverage that way—and Clark and Freddy followed suit. I was sheathed in mud up to my waist and elbows. My condition was hopeless, so I stopped trying to spare myself and just let go. I surrendered to the spirit of the mud. It’s fair to say I wallowed.

“He seems okay. You know him better than I do.”

Clark waited for me to finish. When it was clear that I wasn’t going to, he said, “Whatever you want.”

I told him that all things considered, I’d just as soon keep it to the two of us.

As we crossed the park he asked me to have dinner at his place so he wouldn’t get skinned alive about his clothes…Clark took his time on the walk home, looking in shopwindows and inspecting cars in the lots we passed. When we finally got to the house it was all lit up and music was playing. Even with the windows closed we could hear strains of it from the bottom of the sidewalk. 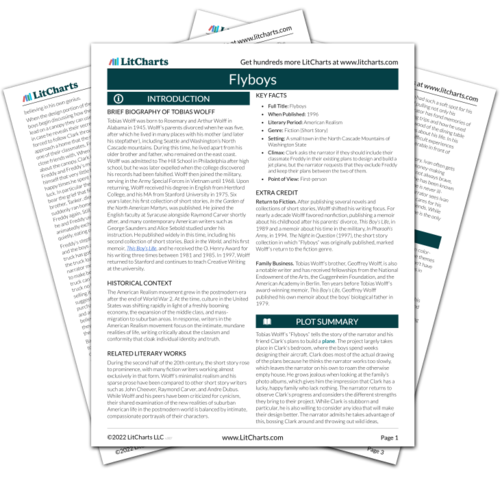 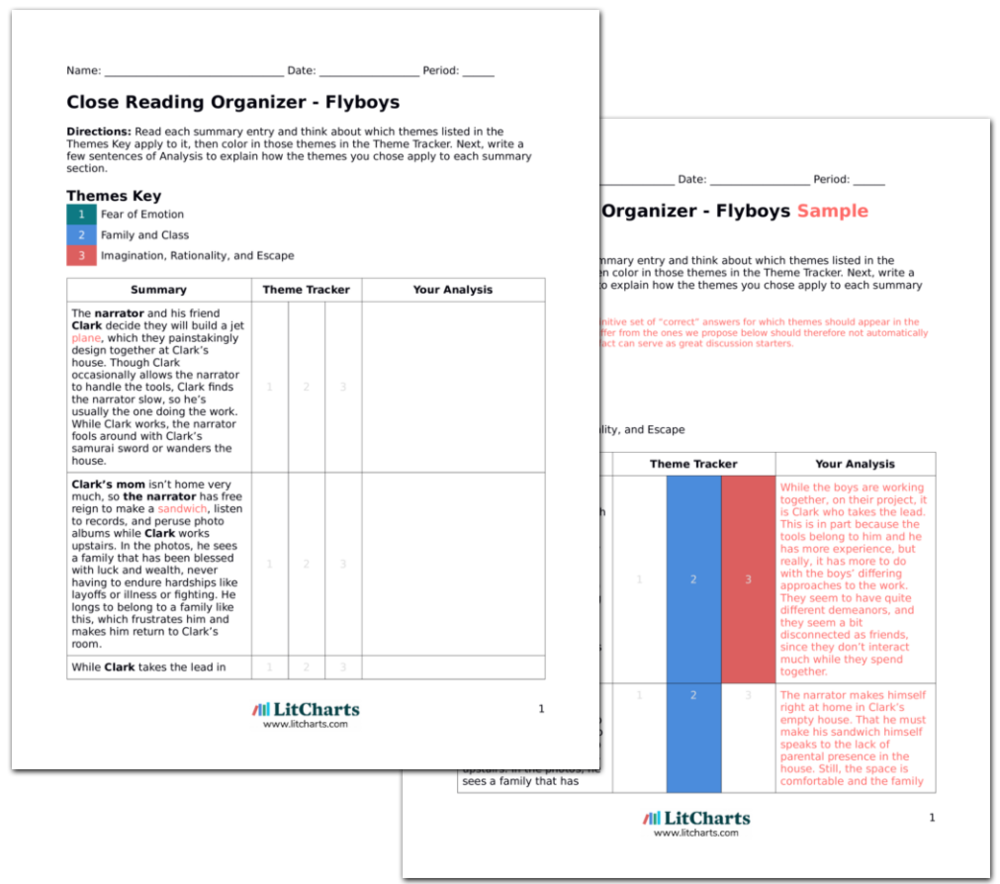