Download this LitChart! (PDF)
Teachers and parents! Struggling with distance learning? Our Teacher Edition on Friendship can help.

Welcome to the LitCharts study guide on Ralph Waldo Emerson's Friendship. Created by the original team behind SparkNotes, LitCharts are the world's best literature guides.

A concise biography of Ralph Waldo Emerson plus historical and literary context for Friendship.

A quick-reference summary: Friendship on a single page.

In-depth summary and analysis of every of Friendship. Visual theme-tracking, too.

Explanations of Friendship's symbols, and tracking of where they appear.

An interactive data visualization of Friendship's plot and themes.

The writer, philosopher, preacher, and orator Ralph Waldo Emerson was born to a religious family in Boston just after the turn of the 19th century. His father was a Unitarian minister and his mother was a religious Anglican.  After studies at the Boston Latin School, Harvard College (where Emerson matriculated at the tender age of 14), and the Harvard Divinity School, Emerson followed his father’s footsteps and was ordained as a minister in 1829. After only three years, however, shaken by his wife’s premature death from tuberculosis, Emerson quit the church and traveled to Europe, where he encountered many of the great poets and philosophers of the day, most notably Coleridge, Wordsworth, and Carlyle. He returned to Massachusetts in 1834 and settled in Concord, where he got to work on the writings that would make him famous. His first book, Nature, was published in 1836, in which he sang of a mystical philosophy of nature that he would continue to unfold for the rest of his career. That philosophy became one of the central tenets of the movement known as Transcendentalism. In 1841 and 1844 he collected his scattered essays—some of which had been published in The Dial, a Transcendentalist journal Emerson founded with Margaret Fuller—into two “series.” “Friendship” was published in the first. Although never a wealthy man, Emerson was able to support himself and his family (he remarried in 1835 and had four children) through his writing and career as a speaker. After a period of failing health, Emerson died in 1882.
Get the entire Friendship LitChart as a printable PDF.
"My students can't get enough of your charts and their results have gone through the roof." -Graham S.
Download it! 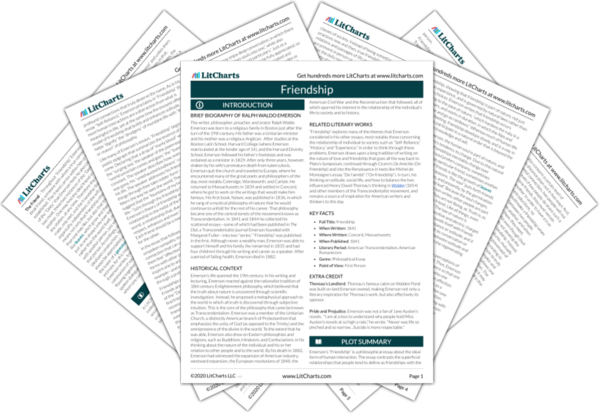 Emerson’s life spanned the 19th century. In his writing and lecturing, Emerson reacted against the rationalist tradition of 18th century Enlightenment philosophy, which believed that the truth about nature is uncovered through scientific investigation. Instead, he proposed a metaphysical approach to the world in which all truth is discovered through subjective intuition. This is the core of the philosophy that came be known as Transcendentalism. Emerson was a member of the Unitarian Church, a distinctly American branch of Protestantism that emphasizes the unity of God (as opposed to the Trinity) and the omnipresence of the divine in the world. To the extent that he was able, Emerson also drew on Eastern philosophies and religions, such as Buddhism, Hinduism, and Confucianism, in his thinking about the nature of the individual and his or her relation to other people and to the world. By his death in 1882, Emerson had witnessed the expansion of American industry, westward expansion, the European revolutions of 1848, the American Civil War and the Reconstruction that followed, all of which spurred his interest in the relationship of the individual’s life to society and to history.

Other Books Related to Friendship

“Friendship” explores many of the themes that Emerson considered in his other essays, most notably those concerning the relationship of individual to society such as “Self-Reliance,” “History,” and “Experience.” In order to think through these problems, Emerson draws upon a long tradition of writing on the nature of love and friendship that goes all the way back to Plato’s Symposium, continued through Cicero’s De Amicitia (On Friendship) and into the Renaissance in texts like Michel de Montaigne’s essay “De l’amitié” (“On friendship”). In turn, his thinking on solitude, social life, and how to balance the two influenced Henry David Thoreau’s thinking in Walden (1854) and other members of the Transcendentalist movement, and remains a source of inspiration for American writers and thinkers to this day.
Key Facts about Friendship

Thoreau’s Landlord. Thoreau’s famous cabin on Walden Pond was built on land Emerson owned, making Emerson not only a literary inspiration for Thoreau’s work, but also effectively its sponsor.

Pride and Prejudice. Emerson was not a fan of Jane Austen’s novels.  "I am at a loss to understand why people hold Miss Austen's novels at so high a rate," he wrote. "Never was life so pinched and so narrow…Suicide is more respectable." 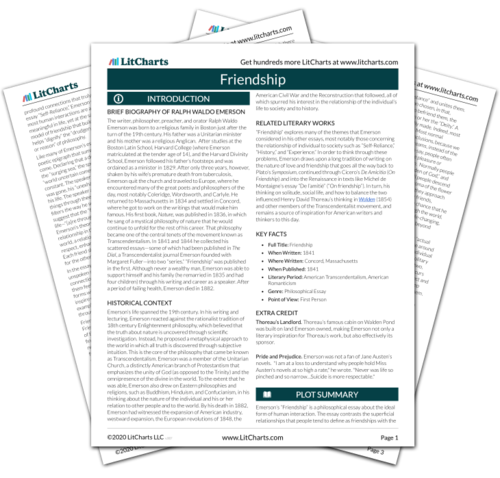 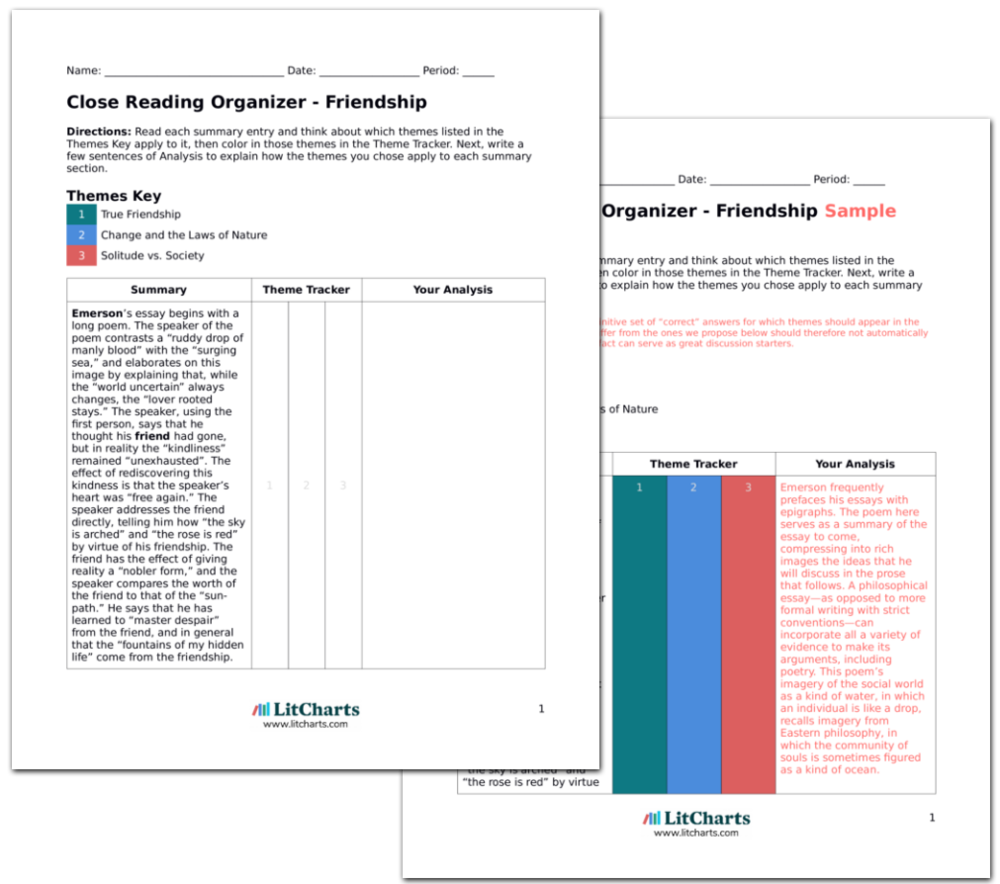