Download this LitChart! (PDF)
Teachers and parents! Struggling with distance learning? Our Teacher Edition on Games at Twilight can help.

Welcome to the LitCharts study guide on Anita Desai's Games at Twilight. Created by the original team behind SparkNotes, LitCharts are the world's best literature guides.

A concise biography of Anita Desai plus historical and literary context for Games at Twilight.

A quick-reference summary: Games at Twilight on a single page.

In-depth summary and analysis of every of Games at Twilight. Visual theme-tracking, too.

Explanations, analysis, and visualizations of Games at Twilight's themes.

Games at Twilight's important quotes, sortable by theme, character, or .

Description, analysis, and timelines for Games at Twilight's characters.

Explanations of Games at Twilight's symbols, and tracking of where they appear.

An interactive data visualization of Games at Twilight's plot and themes.

Born in India to a German mother and a Bengali father, Anita Desai grew up in New Delhi with two older sisters and an older brother. She spoke German at home and Hindi, Bengali, Urdu, and English outside of her home. Desai received a BA in English literature in 1957 from the University of Delhi and married Ashvin Desai the following year. The couple has four children together, including novelist Kiran Desai. In 1958, recognizing how few Indian writers were published in India and the United Kingdom, Desai co-founded the publishing firm Writers Workshop and then published her first novel, Cry the Peacock, in 1963. In 1980, she published Clear Light of Day, and in 1984 she published In Custody. In 1993, she became a creative writing professor at MIT and continued to publish novels and short stories. In total, Desai has written 17 novels and several short story collections. Desai has also taught at Mount Holyoke College, Baruch College, and Smith College, and she’s been shortlisted for the Booker Prize three times.
Get the entire Games at Twilight LitChart as a printable PDF.
"My students can't get enough of your charts and their results have gone through the roof." -Graham S.
Download 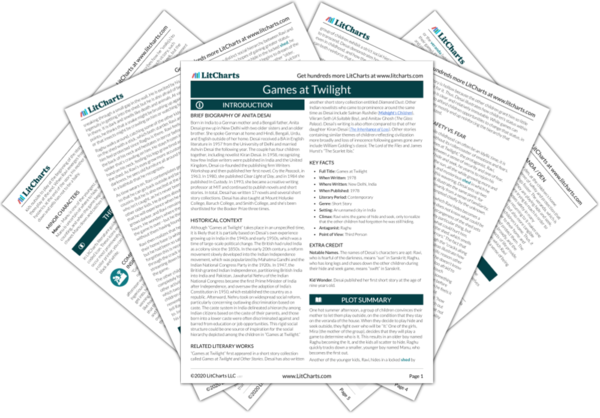 Historical Context of Games at Twilight

Although “Games at Twilight” takes place in an unspecified time, it is likely that it is partially based on Desai’s own experience growing up in India in the 1940s and early 1950s, which was a time of large-scale political change. The British had ruled India as a colony since the 1850s. In the early 20th century, a reform movement slowly developed into the Indian Independence movement, which was popularized by Mahatma Gandhi and the Indian National Congress Party in the 1920s. In 1947, the British granted Indian Independence, partitioning British India into India and Pakistan. Jawaharlal Nehru of the Indian National Congress became the first Prime Minister of India after Independence, and oversaw the adoption of India’s Constitution in 1950, which established the country as a republic. Afterward, Nehru took on widespread social reform, particularly concerning outlawing discrimination based on caste. The caste system in India delineated a hierarchy among Indian citizens based on the caste of their parents, and those born into a lower caste were often discriminated against and barred from education or job opportunities. This rigid social structure could be one source of inspiration for the social hierarchy depicted among the children in “Games at Twilight.”

Other Books Related to Games at Twilight

“Games at Twilight” first appeared in a short story collection called Games at Twilight and Other Stories. Desai has also written another short story collection entitled Diamond Dust. Other Indian novelists who came to prominence around the same time as Desai include Salman Rushdie (Midnight’s Children), Vikram Seth (A Suitable Boy), and Amitav Ghosh (The Glass Palace). Desai’s writing is also often compared to that of her daughter Kiran Desai (The Inheritance of Loss). Other stories containing similar themes of children reflecting civilization more broadly and loss of innocence following games gone awry include William Golding’s classic The Lord of the Flies and James Hurst’s “The Scarlet Ibis.”
Key Facts about Games at Twilight

Extra Credit for Games at Twilight

Notable Names. The names of Desai’s characters are apt: Ravi, who is fearful of the darkness, means “sun” in Sanskrit; Raghu, who has long legs and chases down the other children during their hide and seek game, means “swift” in Sanskrit. 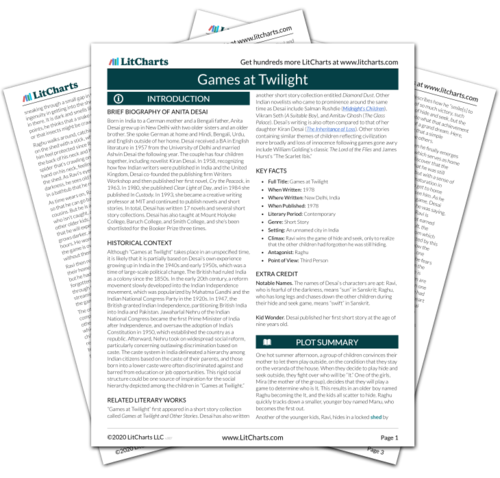 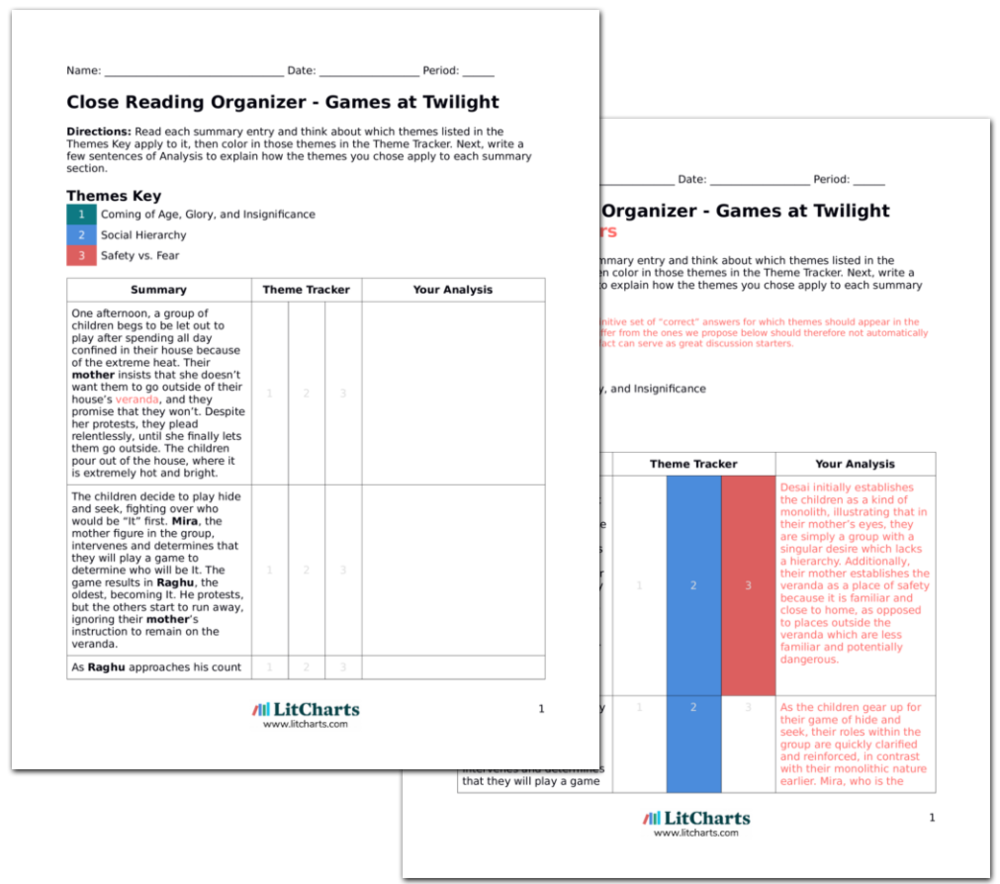