Download this LitChart! (PDF)
Teachers and parents! Struggling with distance learning? Our Teacher Edition on Getting to Yes can help.

Welcome to the LitCharts study guide on Roger Fisher, William L. Ury, and Bruce Patton's Getting to Yes. Created by the original team behind SparkNotes, LitCharts are the world's best literature guides.

Getting to Yes: Introduction

A concise biography of Roger Fisher, William L. Ury, and Bruce Patton plus historical and literary context for Getting to Yes.

Getting to Yes: Plot Summary

A quick-reference summary: Getting to Yes on a single page.

Getting to Yes: Detailed Summary & Analysis

In-depth summary and analysis of every chapter of Getting to Yes. Visual theme-tracking, too.

Getting to Yes: Themes

Explanations, analysis, and visualizations of Getting to Yes's themes.

Getting to Yes: Quotes

Getting to Yes's important quotes, sortable by theme, character, or chapter.

Getting to Yes: Characters

Description, analysis, and timelines for Getting to Yes's characters.

Description, analysis, and timelines for Getting to Yes's terms.

Getting to Yes: Symbols

Explanations of Getting to Yes's symbols, and tracking of where they appear.

Getting to Yes: Theme Wheel

An interactive data visualization of Getting to Yes's plot and themes.

After starting out on varied career paths, Roger Fisher, William Ury, and Bruce Patton came to Getting to Yes by means of the Harvard Negotiation Project. After doing weather reconnaissance in World War II, Roger Fisher decided to dedicate his life to stopping future wars. He attended Harvard Law School and then worked in the Marshall Plan to rebuild Europe and the United States Department of Justice. He went on to teach for more than 40 years at Harvard Law, where he pioneered conflict resolution as an academic discipline. In addition to forming the Harvard Negotiation Project in 1979, Fisher helped mediate some of the most significant peace deals of the 20th century, like the Camp David Accords between Israel and Egypt, the negotiations that ended the Salvadoran Civil War, and the negotiations that ended apartheid and established democracy in South Africa in the early 1990s. William Ury trained as a social anthropologist at Harvard, where he learned to apply the discipline’s sensitivity to differences in culture and perspective to conflict prevention throughout the world. He began working with Fisher as a graduate student and eventually published a dissertation on labor disputes in a Kentucky coal mine, but he’s always focused his career on conflict resolution. He has negotiated to end wars in—among others—Colombia, Indonesia, and the former Yugoslavia and Soviet Union. He also founded the International Negotiation Network in collaboration with American president Jimmy Carter, and he has since started the Abraham Path Initiative, which promotes hiking in the Middle East as a solution to social and religious animosity. Like Roger Fisher, Bruce Patton was also a Harvard Law School professor for several decades. Originally the editor of Getting to Yes, he became a coauthor on the book’s second and third editions. He now runs Vantage Partners, a management consulting company based in Boston. The Harvard Negotiation Project continues working to promote the field of conflict negotiation studies in both university and public contexts.
Get the entire Getting to Yes LitChart as a printable PDF.
"My students can't get enough of your charts and their results have gone through the roof." -Graham S.
Download 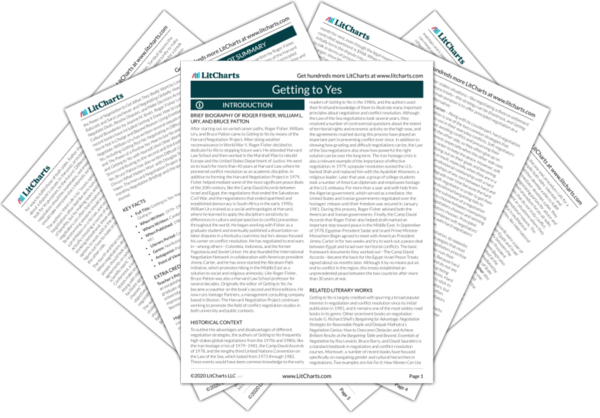 Historical Context of Getting to Yes

To outline the advantages and disadvantages of different negotiation strategies, the authors of Getting to Yes frequently high-stakes global negotiations from the 1970s and 1980s, like the Iran hostage crisis of 1979–1981, the Camp David Accords of 1978, and the lengthy third United Nations Convention on the Law of the Sea, which lasted from 1973 through 1982. These events would have been common knowledge to the early readers of Getting to Yes in the 1980s, and the authors used their firsthand knowledge of them to illustrate many important principles about negotiation and conflict resolution. Although the Law of the Sea negotiations took several years, they resolved a number of controversial questions about the extent of territorial rights and economic activity on the high seas, and the agreements reached during this process have played an important part in preventing conflict ever since. In addition to showing how grueling and difficult negotiations can be, the Law of the Sea negotiations also show how powerful the right solution can be over the long term. The Iran hostage crisis is also a relevant example of the importance of effective negotiation. In 1979, a popular revolution ousted the U.S.-backed Shah and replaced him with the Ayatollah Khomeini, a religious leader. Later that year, a group of college students took a number of American diplomats and employees hostage at the U.S. embassy. For more than a year and with help from the Algerian government, which served as a mediator, the United States and Iranian governments negotiated over the hostages’ release until their freedom was secured in January 1981. During this process, Roger Fisher advised both the American and Iranian governments. Finally, the Camp David Accords that Roger Fisher also helped draft marked an important step toward peace in the Middle East. In September of 1978, Egyptian President Sadat and Israeli Prime Minister Menachem Begin agreed to meet with American President Jimmy Carter in for two weeks and try to work out a peace deal between Egypt and Israel over territorial conflicts. The basic framework documents they worked out—The Camp David Accords—became the basis for the Egypt-Israel Peace Treaty signed about six months later. Although it by no means put an end to conflict in the region, this treaty established an unprecedented peace between the two countries after more than 30 years at war.

Other Books Related to Getting to Yes

Getting to Yes is largely credited with spurring a broad popular interest in negotiation and conflict resolution since its initial publication in 1981, and it remains one of the most widely-read books in its genre. Other prominent books on negotiation include G. Richard Shell’s Bargaining for Advantage: Negotiation Strategies for Reasonable People and Deepak Malhotra’s Negotiation Genius: How to Overcome Obstacles and Achieve Brilliant Results at the Bargaining Table and Beyond. Essentials of Negotiation by Roy Lewicki, Bruce Barry, and David Saunders is a standard textbook in negotiation and conflict-resolution courses. Moreover, a number of recent books have focused specifically on navigating gender and cultural hierarchies in negotiations. Two examples are Ask For It: How Women Can Use the Power of Negotiation to Get What They Really Want by Linda Babcock and Sara Laschever and Negotiating Globally: How to Negotiate Deals, Resolve Disputes, and Make Decisions Across Cultural Boundaries by Jeanne M. Brett. Roger Fisher’s most recent books have included Getting it Done: How to Lead When You’re Not in Charge and Beyond Reason: Using Emotions as You Negotiate. William Ury has written several sequels to Getting to Yes, including Getting Past No: Negotiating in Difficult Situations and The Power of a Positive No: How to Say No and Still Get to Yes, and Getting to Yes with Yourself (And Other Worthy Opponents). Since contributing to the second and third editions of Getting to Yes, Bruce Patton has also written Difficult Conversations: How to Discuss What Matters Most  with Douglas Stone and Sheila Heen. The Harvard Negotiation Project actively publishes monthly Negotiation Briefings and the quarterly Negotiation Journal.
Key Facts about Getting to Yes

Extra Credit for Getting to Yes

Teacher’s Pet. The book’s coauthors first met when Fisher was an established professor at Harvard Law School and Ury was a graduate student studying social anthropology at the same university. Fisher read one of Ury’s papers and was so impressed that he sent it to one of the United States Assistant Secretaries of State and wanted to offer Ury a job.

High Stakes. Beyond ending numerous wars and political conflicts around the world, Fisher is also famous for a unique strategy to prevent nuclear war in the future. He argued that the United States’ nuclear launch codes should be physically implanted in someone, so that the President would have to personally kill that person if they wanted to get to the codes. Fisher thought that this would force the president to truly confront the tragedy of innocent death and the horrors of nuclear war. 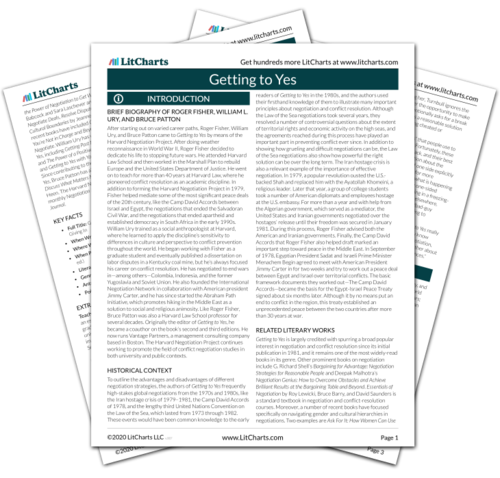 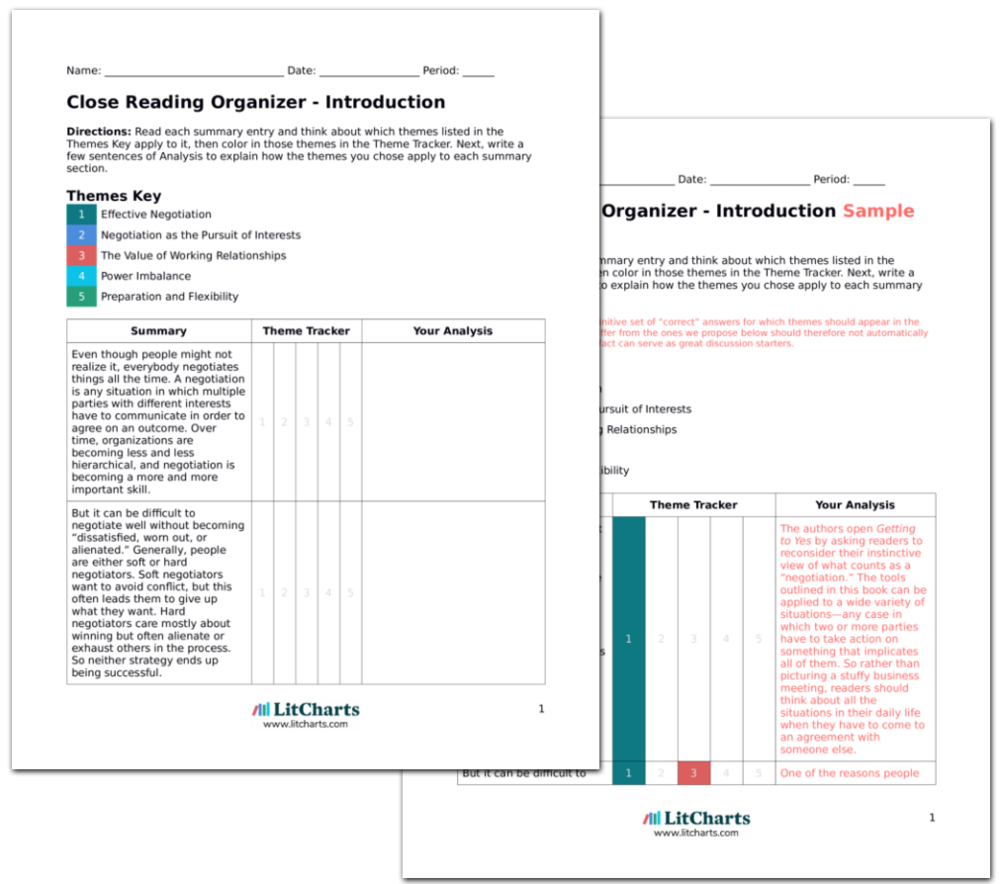