Welcome to the LitCharts study guide on Isaac Bashevis Singer's Gimpel the Fool. Created by the original team behind SparkNotes, LitCharts are the world's best literature guides.

A concise biography of Isaac Bashevis Singer plus historical and literary context for Gimpel the Fool.

A quick-reference summary: Gimpel the Fool on a single page.

In-depth summary and analysis of every part of Gimpel the Fool. Visual theme-tracking, too.

Explanations, analysis, and visualizations of Gimpel the Fool's themes.

Description, analysis, and timelines for Gimpel the Fool's characters.

Explanations of Gimpel the Fool's symbols, and tracking of where they appear.

An interactive data visualization of Gimpel the Fool's plot and themes.

Isaac Bashevis Singer, winner of the 1978 Noble Prize for Literature, was one of the most admired and influential Jewish writers of the twentieth century, as well as a key figure in the history of literature written in Yiddish, the language in which he published throughout his career. He was born in 1903 into an orthodox Jewish household in the village of Leoncin, Poland, just outside Warsaw, the city where the family moved a few years later. Descended from a long line of rabbis, including his father, Singer initially aspired to become one himself, but ultimately decided his calling lay elsewhere. During his twenties, he transitioned to a secular lifestyle and immersed himself in literary pursuits, writing and publishing his first short stories, as well as working as an editor and translator. By 1935, anti-Semitic sentiment in Europe had so intensified, especially with the rise to power of Adolph Hitler and the Nazi party in Germany, that Singer decided to emigrate to New York City, just after the publication of his debut novel Satan in Goray. Once in the United States, he continued to write, but it was not until his fiction started to appear in English translations in the 1950s that he achieved widespread recognition. Soon thereafter, he became internationally revered for his witty and poignant renderings of the pre-World War II lives of Jews in Eastern Europe and his ability to make the part of the world he knew so well feel universal to a global audience. “Gimpel the Fool” remains one of his most famous stories. Although Singer lived on the Upper West Side of Manhattan for most of his adult life and became a fluent speaker of English, he continued to publish almost entirely in Yiddish and made the celebration and preservation of that language the subject of his Noble Prize Lecture. In his final years, he moved with his wife, Alma, to Florida, where he died in 1991.
Get the entire Gimpel the Fool LitChart as a printable PDF.
"My students can't get enough of your charts and their results have gone through the roof." -Graham S.
Download 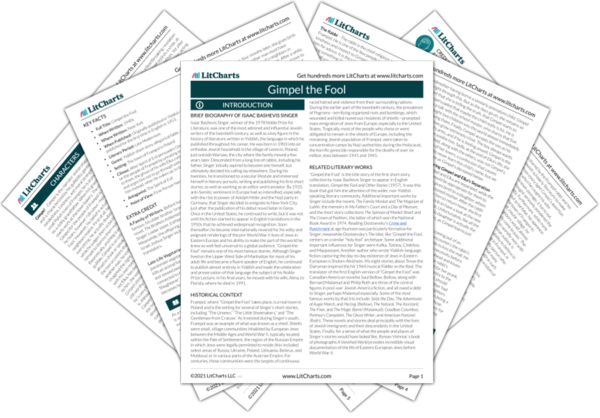 Historical Context of Gimpel the Fool

Frampol, where “Gimpel the Fool” takes place, is a real town in Poland and is the setting for several of Singer’s short stories, including “The Unseen,” “The Little Shoemakers,” and “The Gentleman from Cracow.” As it existed during Singer’s youth, Frampol was an example of what was known as a shtetl. Shtetls were small, village communities inhabited by European Jews between the Middle Ages and World War II, typically located within the Pale of Settlement, the region of the Russian Empire in which Jews were legally permitted to reside (this included select areas of Russia, Ukraine, Poland, Lithuania, Belarus, and Moldova) or in various parts of the Austrian Empire. For centuries, these communities were the targets of continuous racial hatred and violence from their surrounding nations. During the earlier part of the twentieth century, the prevalence of Pogroms—terrifying organized riots and bombings, which wounded and killed numerous residents of shtetls—prompted mass emigration of Jews from Europe, especially to the United States. Tragically, most of the people who chose or were obligated to remain in the shtetls of Europe, including the remaining Jewish population of Frampol, were taken to concentration camps by Nazi authorities during the Holocaust, the horrific genocide responsible for the deaths of over six million Jews between 1941 and 1945.

Other Books Related to Gimpel the Fool

“Gimpel the Fool” is the title story of the first short story collection by Isaac Bashevis Singer to appear in English translation, Gimpel the Fool and Other Stories (1957). It was this book that got him the attention of the wider, non-Yiddish speaking literary community. Additional important works by Singer include the novels, The Family Moskat and The Magician of Lublin, the memoirs In My Father’s Court and a Day of Pleasure, and the short story collections The Spinoza of Market Street and  The Crown of Feathers, the latter of which won the National Book Award in 1974. Reading Dostoevsky’s Crime and Punishment at age fourteen was particularly formative for Singer; meanwhile Dostoevsky’s The Idiot, like “Gimpel the Fool, centers on a similar “holy fool” archetype. Some additional important influences for Singer were Kafka, Tolstoy, Chekhov, and Maupassant. Another author who wrote Yiddish-language fiction capturing the day-to-day existence of Jews in Eastern European is Sholom Aleichem. His eight stories about Tevye the Dairyman inspired the hit 1964 musical Fiddler on the Roof. The translator of the first English version of “Gimpel the Fool” was Canadian-American novelist Saul Bellow. Bellow, along with Bernard Malamud and Philip Roth are three of the central figures in post-war Jewish-America fiction, and all owed a debt to Singer, perhaps Malamud especially. Some of the most famous works by that trio include: Seize the Day, The Adventures of Augie March, and Herzog (Bellow), The Natural, The Assistant, The Fixer, and The Magic Barrel (Malamud); Goodbye Columbus, Portnoy’s Complaint, The Ghost Writer, and American Pastoral (Roth). These novels and stories deal principally with the lives of Jewish immigrants and their descendants in the United States. Finally, for a sense of what the people and places of Singer’s stories would have looked like, Roman Vishniac’s book of photographs A Vanished World provides incredible visual documentation of the life of Eastern European Jews before World War II.
Key Facts about Gimpel the Fool

Extra Credit for Gimpel the Fool

Late-Life Vegetarianism. In his fifties, Singer became a passionate vegetarian. He believed that that “when a human kills an animal for food, he neglects his own hunger for justice” and viewed people’s mistreatment of animals as intimately connected to their cruelty to each other. His short story “The Slaughterer” follows the moral growth of a butcher who becomes horrified by the suffering of his victims. 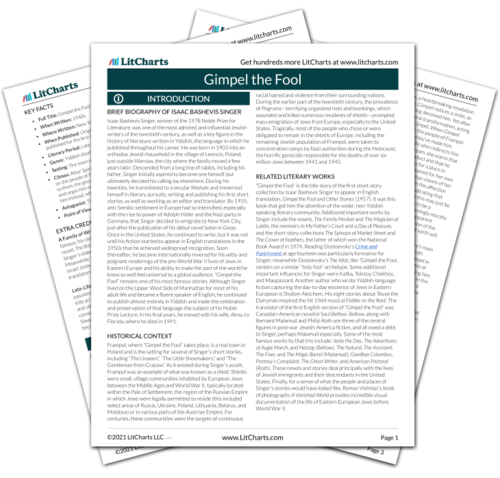 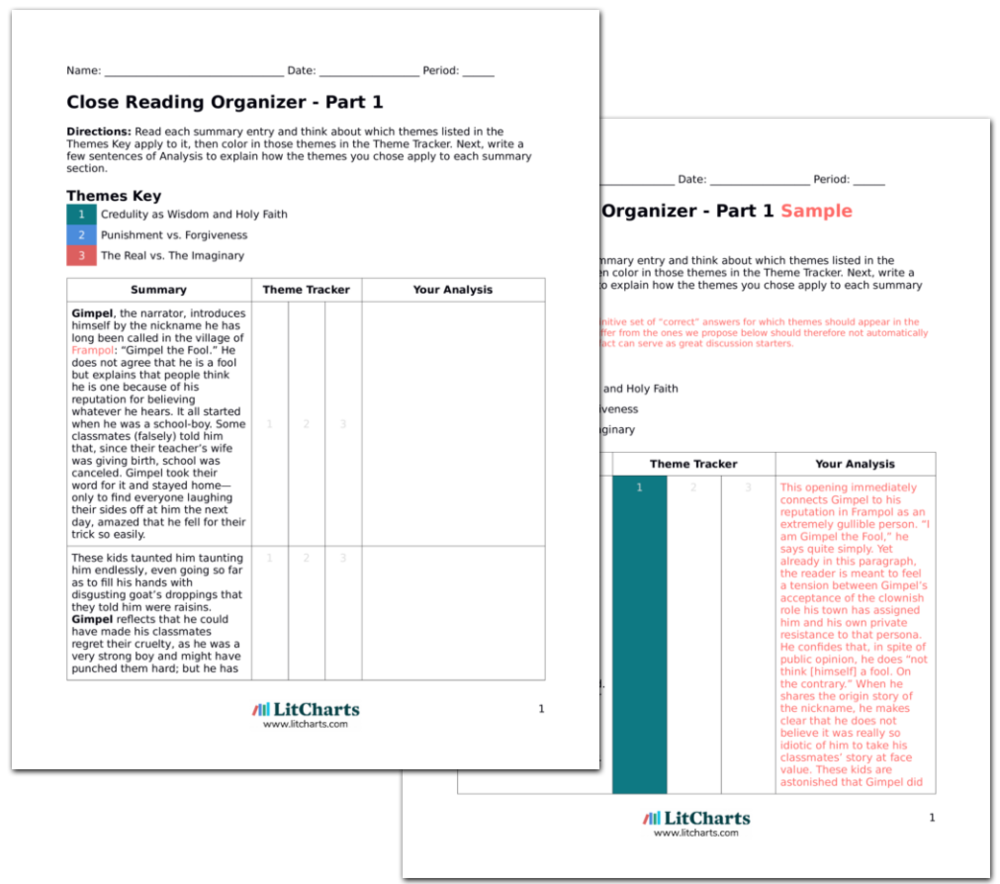