The writer Susanna Kaysen reflects on her time as a patient at the McLean psychiatric hospital in Belmont, Massachusetts—an institution whose former patients include Ray Charles and Sylvia Plath—twenty-five years earlier, in 1967. Kaysen, who was diagnosed with Borderline Personality Disorder—a “character disorder” marked by deep instability in self-image, interpersonal relationships, and conception of the future—was admitted to the hospital after meeting with a therapist for only twenty minutes, and though she was told she’d only be spending a couple of weeks there, she wound up in the psychiatric ward of the hospital for nearly two years.

As Susanna adjusts to life at McLean, she gets to know the other patients in the psych ward, who are all young women like herself. One girl, Polly, attempted suicide by self-immolation, and is now covered in horrible burns and scars. Another, Lisa, is a wild and charismatic ex-junkie and the ward’s only sociopath, who frequently escapes from the hospital and plays elaborately-planned pranks on the nurses and orderlies. Susanna’s roommate, Georgina, is a schizophrenic, with a boyfriend named Wade who is a patient in the men’s section of the psychiatric ward. Daisy, a “seasonal” visitor to the hospital, checks herself in at Thanksgiving each year and leaves right before Christmas, after amassing a collection of exactly fourteen roast chicken carcasses beneath her bed.

Susanna reflects on the path that took her to McLean. After a half-hearted suicide attempt, meant to quell the part of her brain that had become darkly and obsessively curious about the act, Susanna began seeing patterns in the world around her and experiencing a feeling of dissociation any time she looked at another human face. Susanna was self-aware of these hiccups in her behavior and perception, but maintains that she was never delusional or hallucinatory—she was simply curious about what secrets people kept about how they saw and interacted with the world around them.

The sterile and insular world of the psychiatric ward, which strips patients of their privacy, personal freedom, and bodily autonomy, is characterized by a complicated system of rewards for good behavior and punishments for backtalk, aggression, and other forms of “acting out.” Trips outside the hospital to places like the ice cream parlor are complex, tense ballets in which patients test their limits and nurses struggle to keep their charges in line. On the ward, a system of routine checks, completed circuitously in five, fifteen, or thirty-minute intervals (based on each individual patient’s progress and demeanor) provides the “pulse” of the patients’ days, and the only break in routine comes with the arrival of a new patient. When a second Lisa—Lisa Cody—shows up on the ward, a battle of wits between the two Lisas commences. Lisa Cody, admiring and even adoring of the “real” Lisa, declares herself a sociopath as well, and the two struggle to outdo one another in a series of escalating insults, fights, and pranks. When a girl named Alice Calais arrives, she appears docile and “normal,” aside from the fact that she seems to know very little about the world (for instance, she has never tasted honey, and has never heard of the French city that shares her last name). One day, Alice “explodes,” and is sent to seclusion and then to maximum security. When Lisa, Susanna, and Georgina visit her in her new ward, they discover that she has covered her body and the walls of her room in her own feces, and all three women experience a moment of fear as they realize that what happened to Alice could happen, at any moment, to any of them.

As Susanna reflects on her adjustment to life on the ward, she considers all she learned about the intricacies of mental illness and the ways in which it is medically treated during her time there. She delves into the complicated nature of the mind and the brain, examining the “two basic varieties” of insanity: velocity, during which thoughts come rapidly, repetitively, and endlessly; and viscosity, in which thoughts are slow, laborious, and physically draining. Perturbed by the often distant, unhelpful, and ever-changing staff, the stringent regulations, and the distant chaos of the outside world (which Susanna and her fellow patients are only able to glimpse on television), Susanna begins to descend deeper into insanity. At one point she begins to fear that she has no bones in her body and attempts to bite her hand open to see what is really inside it. After an infection in her wisdom tooth sends Susanna to the dentist, she is upset to find, after her extraction, that she has “lost” an unknowable amount of time under anesthesia, and breaks down in front of the head nurse, Valerie, revealing her fear of having lost some of the most precious time of her life during her stay at McLean.

Susanna enters analysis—her therapist, Melvin, claims that she is the only one on the ward with a “well-integrated personality” and the only woman there who could stand up to the mysteries and self-inquiry analysis demands. After several months, though, Susanna finds herself frustrated by her analyst’s many misinterpretations of her feelings, thoughts, and ideas, especially when he misunderstands her fascination with a series of tunnels beneath the hospital which connect the many wings and wards as a desire to return to the stasis of the womb, when really Susanna is mesmerized by possibility, variety, and the chance to move forward into the unknown realm of her future.

As Susanna nears the end of her stay at McLean, she applies for jobs, but finds that the stigma of having been institutionalized makes getting one impossible. Susanna expresses the desire to become a writer once her time in McLean is up, but her social worker derides her dream as a “hobby” and encourages her to find “nice clean work” as a dental technician. Instead, Susanna, having amassed enough privileges to leave the hospital for stretches of time, goes on a series of dates with a friend of a friend whom she’d connected with romantically years before her institutionalization, and eventually accepts a marriage proposal from him. Lisa and Georgina encourage Susanna to think hard about what it is she wants from her future, but Susanna finds herself unable to visualize what it is she wants and who she will become.

Susanna, reflecting on the whole of her time in McLean, rails against the state of mental health treatment, arguing that treating the mind and the brain as separate entities isolates the mentally ill even further and makes it more difficult to treat issues that affect both the abstract landscape of the “mind” and the chemical-electrical circuit of the “brain.” Susanna then outlines the definition of her own disease, Borderline Personality Disorder, as it appears in the DSM, or the Diagnostic and Statistical Manual of Mental Disorders, and “annotates” it for the reader. She takes issue with several hallmarks of her “disorder,” arguing that many of the symptoms it outlines—instability, moodiness, reckless or thoughtless behavior—are simply part of the condition of being an adolescent girl. Though Susanna was considered to have “recovered” from Borderline Personality Disorder at the time of her discharge from McLean, she still wonders, twenty-five years later, whether she is “crazy,” what constitutes “craziness,” and why the border between sanity and insanity is treated as so distinct when, in reality, it is much more porous and permeable than most people would like to believe.

After Susanna was released from McLean, she kept in touch with a few of her fellow patients. Georgina married and lived on a farm for a while before moving west to Colorado. A chance encounter with Lisa in Harvard Square revealed that Lisa had become a mother, though she remained unmarried, and often thought about her time spent in the hospital. Daisy committed suicide while Susanna was still a patient at McLean. Lisa Cody was last seen on the streets of Cambridge by the “real” Lisa, who reported that Lisa Cody had finally become a “real junkie.”

Years after her release, Susanna’s marriage has ended and she is visiting the Frick Museum in New York with a new boyfriend. She has not been to the museum since she was a teenager. She encounters a Vermeer painting she remembers having felt a connection to on her last visit, but finds that the painting has “changed” over the last sixteen years. The painting, which depicts a “girl look[ing] out, ignoring her beefy music teacher,” once seemed to be trying to tell Susanna something urgent; now, Susanna sees only sadness and the need for connection in the girl’s lonely eyes. Susanna reads the painting’s title for the first time: it is called Girl Interrupted at Her Music. Susanna breaks down in tears, reflecting on the ways in which her institutionalization was an interruption in her own life at the age of seventeen. Susanna writes that she has gone back to visit the painting many times over the years, and that what she admires most about it is the light within it—a strange, overcast light which has the quality of the light found in real life. It is a light, she notes, in which one can only glimpse oneself “imperfectly and seldom.” 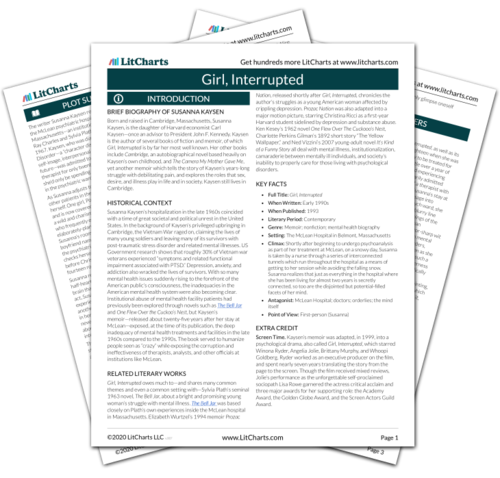 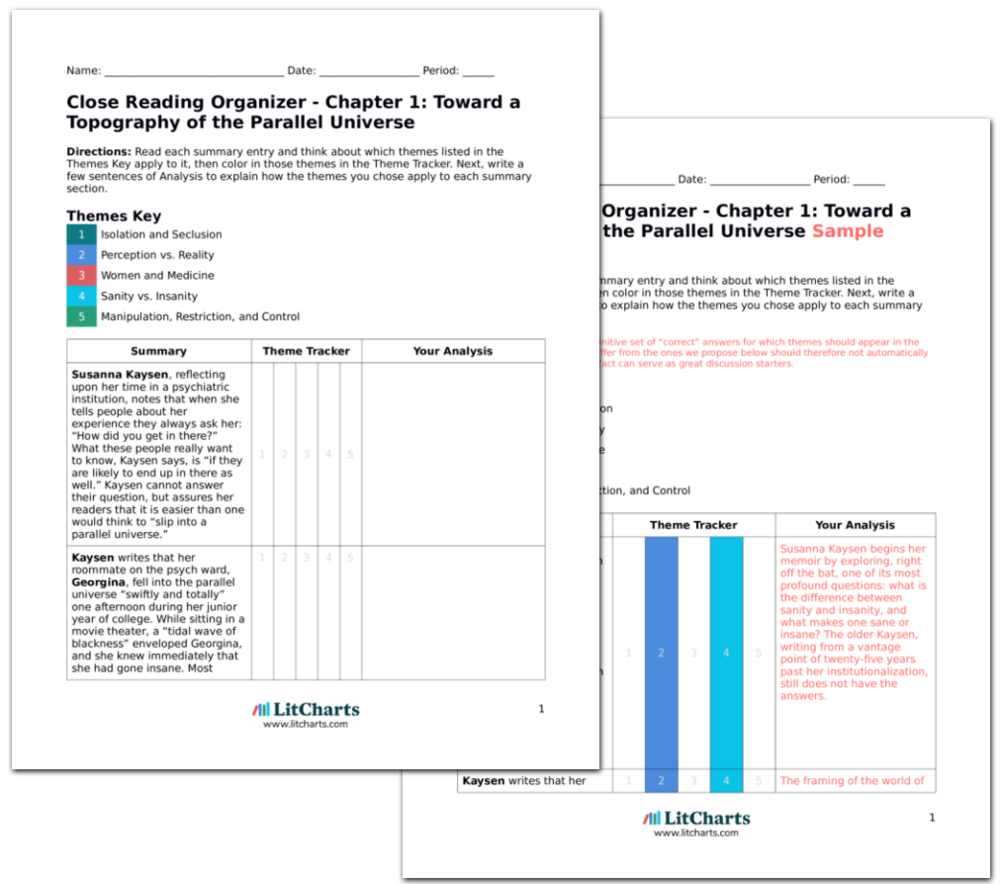