Get LitCharts A+
LitCharts assigns a color and icon to each theme in Girl, which you can use to track the themes throughout the work.

In “Girl,” Mother’s instructions are peppered with constant warnings and accusations about the girl becoming a slut. Ironically, this is never in the context of sex or promiscuity—instead, the behaviors that Mother suggests will lead to the girl becoming a slut are distinctly non-sexual, while her actual mentions of sexuality are relatively nonjudgmental. Although being a “slut” is apparently the worst thing that the girl could become, Mother does not shy away from giving her daughter pragmatic advice about sex itself; instead, she uses the word “slut” as a way to infuse everyday social transgressions or mistakes with the taint of sexuality, thereby making the girl afraid of falling short publicly in any way because of the shame it will bring her reputation.

The everyday behaviors that Mother insists will make the girl a “slut” are notable in that they concern reputation and public appearance rather than sexuality. For example, Mother instructs the girl to “walk like a lady and not like the slut you are so bent on becoming,” to “hem a dress when you see the hem coming down,” and to behave in certain ways “in the presence of men who don’t know you very well, and this way they won’t immediately recognize the slut I have warned you against becoming.” Having a loose hem, walking the wrong way, or behaving improperly around strangers are behaviors that others would notice and that might negatively affect the girl’s reputation. In other words, such behaviors might invite nasty gossip, and, as a woman, the girl’s reputation is one of her only means of achieving respect or advancement. By framing these behaviors as sexual impropriety, rather than as a simple lapse in manners or an expression of individual personality, Mother teaches the girl to be afraid of the shame that her public presentation might invite.

Ironically, though, Mother is not categorically against sex, and when she discusses sex, she does so relatively pragmatically and nonjudgmentally. For example, as part of teaching the girl recipes for traditional dishes and medicines, she tells the girl how to make a medicine to induce an abortion. She breezes right past this, placing it alongside other non-sexual recipes: “this is how to make pepper pot; this is how to make a good medicine for a cold; this is how to make a good medicine to throw away a child before it even becomes a child; this is how to catch a fish…” This suggests that inducing an abortion is as normal an act as making dinner or treating a cold, which indicates that actual sex acts—so long as they’re not publicly known (and this medicine might be used to prevent them from being publicly known)—are normal.

Furthermore, Mother specifically explains sex to her daughter, saying “this is how to love a man, and if this doesn’t work there are other ways, and if they don’t work don’t feel too bad about giving up.” This explanation is pragmatic and not loaded with the shameful and accusatory language Mother uses when telling her daughter not to do anything in public that might make her seem like a “slut.” Instead, as Mother actually explains sex to her daughter, she seems somewhat bewildered by it, giving what seems to be a formulaic explanation of sex and lacking ideas about sexuality beyond a few methods. This suggests that while female pleasure is perhaps not broadly understood or prioritized, sex is not something that is to be avoided. Therefore, Mother’s advice suggests that the propriety of sexuality hinges on privacy. While any aspect of the girl’s daily life in which she publicly falls short will be read through the lens of sexual impropriety, if the girl expresses her sexuality in private, her actions are normal, the consequences can be dealt with, and she should know what to do.

The ThemeTracker below shows where, and to what degree, the theme of Sexuality appears in each chapter of Girl. Click or tap on any chapter to read its Summary & Analysis.
How often theme appears:
chapter length:
Chapter
Girl
Get the entire Girl LitChart as a printable PDF.
"My students can't get enough of your charts and their results have gone through the roof." -Graham S.
Download 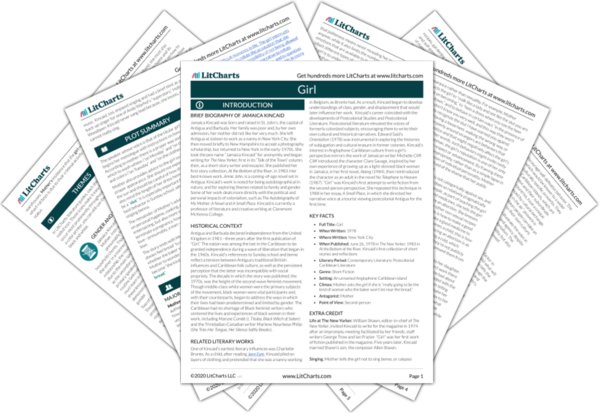 Below you will find the important quotes in Girl related to the theme of Sexuality.
Girl Quotes

You mustn’t speak to wharf-rat boys, not even to give directions.

This is how to hem a dress when you see the hem coming down and so to prevent yourself from looking like the slut I know you are so bent on becoming. 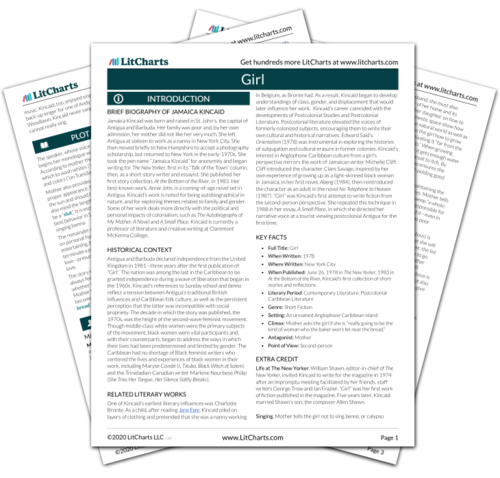 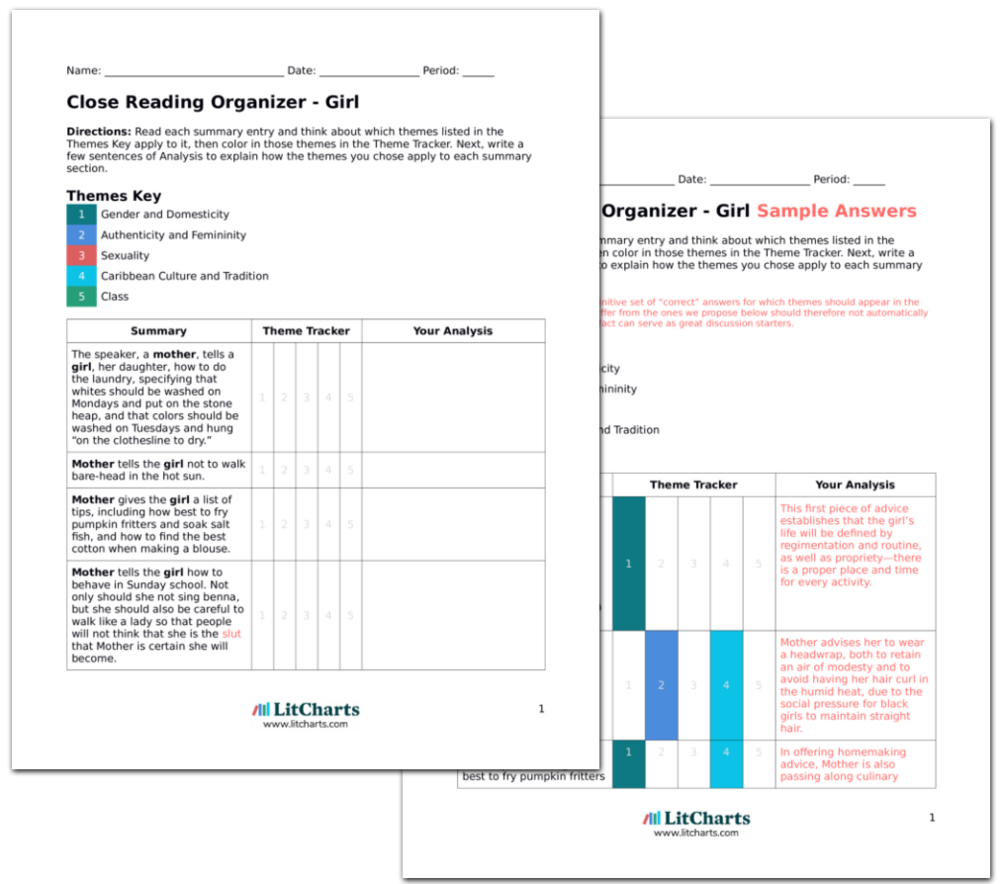