Download this LitChart! (PDF)
Teachers and parents! Struggling with distance learning? Our Teacher Edition on Goblin Market can help.

Welcome to the LitCharts study guide on Christina Rossetti's Goblin Market. Created by the original team behind SparkNotes, LitCharts are the world's best literature guides.

A concise biography of Christina Rossetti plus historical and literary context for Goblin Market.

A quick-reference summary: Goblin Market on a single page.

In-depth summary and analysis of every of Goblin Market. Visual theme-tracking, too.

Explanations of Goblin Market's symbols, and tracking of where they appear.

An interactive data visualization of Goblin Market's plot and themes.

Christina Georgina Rossetti was born into an artistic, well-educated Italian-English family. Her father was a political exile, poet, and translator, and her maternal uncle, John Polidori, was a writer and physician to the famous Romantic poet Lord Byron. Rossetti was educated at home by her mother, Frances, who was devoutly religious and influenced her daughter’s lifelong devotion to the Anglican faith. Despite the family’s literary connections, they were relatively poor. Like many young women in her position, Rossetti prepared to become a governess (one of the few “respectable” occupations for women at the time), but poor health prevented her from teaching. The Rossetti household was intensely creative and artistic. All three of her siblings were writers, and her brother, Dante Gabriel, helped found the Pre-Raphaelite Brotherhood, one of the most influential artistic movements of the Victorian period. Although not an official member, Rossetti collaborated with the Pre-Raphaelite Brotherhood, contributing poetry to their journal, The Germ, under the pen name Ellen Alleyn, and modelling for their paintings. Rossetti’s early poetry—influenced by Romantic literature as well as her own ill health—focused on themes of love and death. As her family’s financial situation worsened and her health deteriorated, Rossetti grew more devoutly religious. Choosing to remain single, she led a relatively restricted life devoted to poetry, religion, and companionship with her mother and aunts. Between 1859 and 1870, Rossetti volunteered with the Church Penitentiary Movement, which offered a home, religious instruction, and training to women who were formerly prostitutes. The experience influenced her thoughts about fallen women and may have influenced “Goblin Market,” which she published in 1862. Rossetti was a prolific writer. She published several more collections of poetry, devotional works, and short stories, and contributed to magazines and charity publications. During her lifetime, Rossetti had an excellent literary reputation in both the U.S. and the UK, where she was considered as a possible candidate for Poet Laureate following Tennyson’s death in 1892. Rossetti died in 1894, and today she is recognized as one of the finest poets of the nineteenth century.
Get the entire Goblin Market LitChart as a printable PDF.
"My students can't get enough of your charts and their results have gone through the roof." -Graham S.
Download 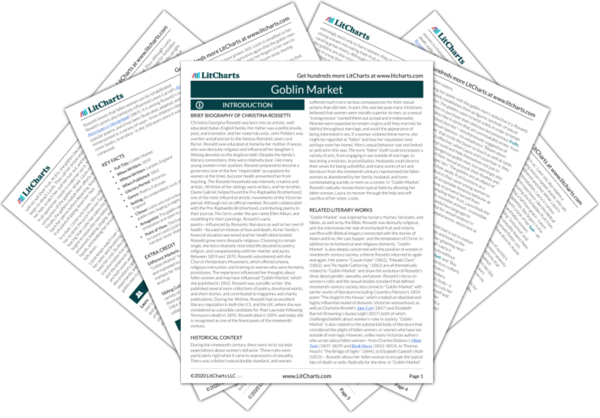 During the nineteenth century, there were strict societal expectations about women’s behavior. These rules were particularly rigid when it came to expressions of sexuality. There was a distinct sexual double standard, and women suffered much more serious consequences for their sexual actions than did men. In part, this was because many Victorians believed that women were morally superior to men, so a sexual “transgression” marked them out as bad and irredeemable. Women were expected to remain virgins until they married, be faithful throughout marriage, and avoid the appearance of being interested in sex. If a woman violated these norms, she might be regarded as “fallen” and lose her reputation (and perhaps even her home). Men’s sexual behavior was not limited or policed in this way. The term “fallen” itself could encompass a variety of acts, from engaging in sex outside of marriage, to becoming a mistress, to prostitution. Husbands could divorce their wives for being unfaithful, and many works of art and literature from the nineteenth century represented the fallen woman as abandoned by her family, husband, and lover, contemplating suicide, or even as a corpse. In “Goblin Market,” Rossetti radically revises these typical fates by allowing her fallen woman, Laura, to recover through the help and self-sacrifice of her sister, Lizzie.

Other Books Related to Goblin Market

“Goblin Market” was inspired by nursery rhymes, fairytales, and fables, as well as by the Bible. Rossetti was devoutly religious, and she intertwines her tale of enchanted fruit and sisterly sacrifice with Biblical imagery connected with the stories of Adam and Eve, the Last Supper, and the temptation of Christ. In addition to its fantastical and religious elements, “Goblin Market” is also deeply concerned with the position of women in nineteenth-century society, a theme Rossetti returned to again and again. Her poems “Cousin Kate” (1862), “Maude Clare” (1862), and “An Apple Gathering” (1862) are all thematically related to “Goblin Market” and show the evolution of Rossetti’s ideas about gender, sexuality, and power. Rossetti’s focus on women’s roles and the sexual double standard that defined nineteenth-century society also connects “Goblin Market” with earlier works of literature including Coventry Patmore’s 1854 poem “The Angel in the House,” which created an idealized and highly influential model of domestic Victorian womanhood, as well as Charlotte Brontë’s Jane Eyre (1847) and Elizabeth Barrett Browning’s Aurora Leigh (1857), both of which challenged beliefs about women’s roles in society. “Goblin Market” is also related to the substantial body of literature that considered the plight of fallen women, or women who have sex outside of marriage. However, unlike many Victorian authors who wrote about fallen women—from Charles Dickens’s Oliver Twist (1837-1839) and Bleak House (1852-1853), to Thomas Hood’s “The Bridge of Sighs” (1844), to Elizabeth Gaskell’s Ruth (1853)— Rossetti allows her fallen woman to escape the typical fate of death or exile. Radically for the time, in “Goblin Market” Rossetti insists that fallen woman can be rehabilitated. Rosetti’s poem also famously influenced Lewis Carroll’s Alice's Adventures in Wonderland (1865). It is among Rossetti’s most popular poems, and it has been illustrated, adapted, and reinterpreted in a variety of ways—from children’s literature, to comic books, to erotica—in the 160 years since it was composed.
Key Facts about Goblin Market

Different Markets. As one of Rossetti’s most popular works, “Goblin Market” has been republished, repackaged, reworked, and marketed to different audiences. Two very different markets for this poem have been children’s literature and erotica!

Sibling Collaboration. “Goblin Market” has been illustrated in a variety of ways, from Arthur Rackham’s famous fairytale illustrations in 1933 to John Bolton’s comic book adaptation of 1984. But Rossetti’s first illustrator was her brother and collaborator, Dante Gabriel Rossetti. 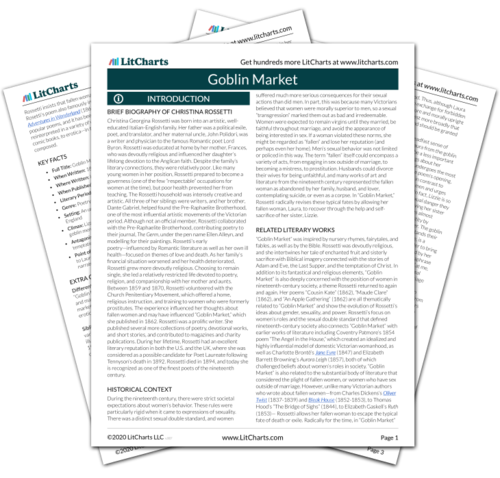 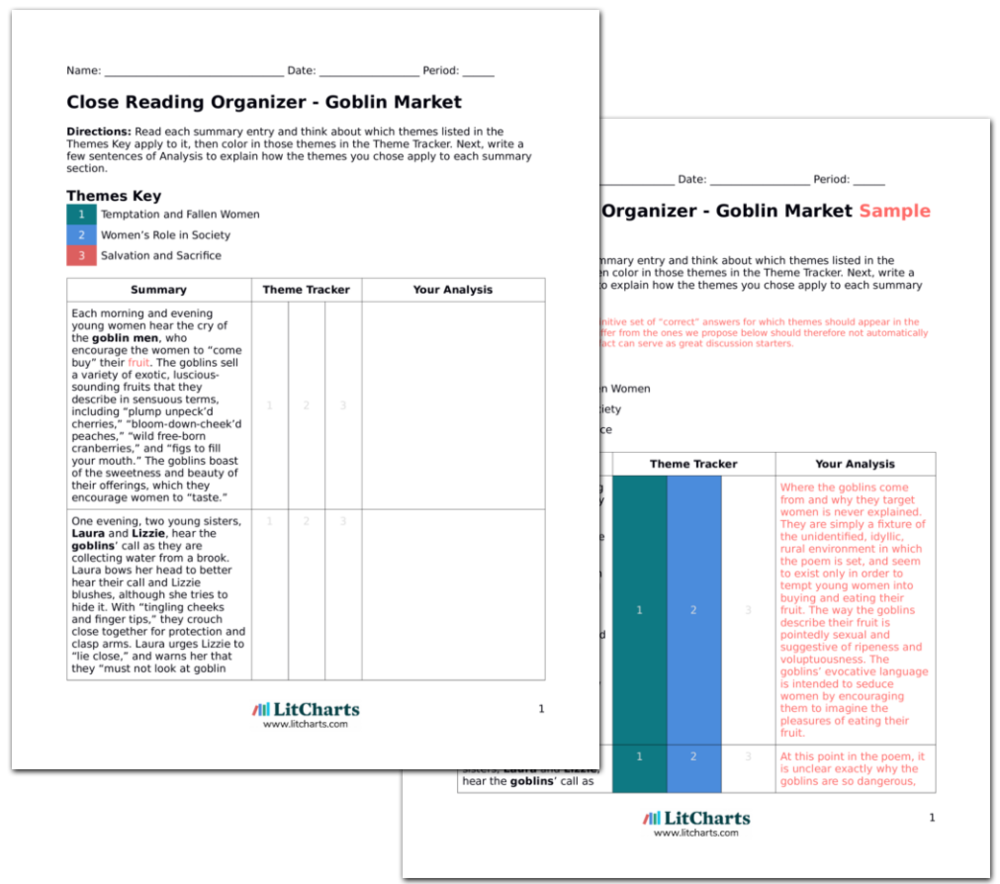