Download this LitChart! (PDF)
Teachers and parents! Struggling with distance learning? Our Teacher Edition on God Sees the Truth But Waits can help.

Welcome to the LitCharts study guide on Leo Tolstoy's God Sees the Truth But Waits. Created by the original team behind SparkNotes, LitCharts are the world's best literature guides.

A concise biography of Leo Tolstoy plus historical and literary context for God Sees the Truth But Waits.

A quick-reference summary: God Sees the Truth But Waits on a single page.

In-depth summary and analysis of every of God Sees the Truth But Waits. Visual theme-tracking, too.

Explanations, analysis, and visualizations of God Sees the Truth But Waits's themes.

God Sees the Truth But Waits's important quotes, sortable by theme, character, or .

Description, analysis, and timelines for God Sees the Truth But Waits's characters.

Explanations of God Sees the Truth But Waits's symbols, and tracking of where they appear.

An interactive data visualization of God Sees the Truth But Waits's plot and themes.

Lev Nikolayevich (Leo) Tolstoy was born to an aristocratic Russian family in 1828. He studied oriental languages and then law at the university of Kazan, and he developed an interest in literature, ethics, and philosophy, including works by western European intellectuals such as the 18th-century French philosopher Jean-Jacques Rousseau. Tolstoy eventually dropped out of university and began writing while living a lifestyle of gambling and heavy drinking. In 1851 Tolstoy became an artillery officer in the Crimean War, and in 1854-1855 he was involved in the siege of Sevastopol, an experience that inspired him to write the Sevastopol Sketches, which highlight the devastation and senselessness of war and form the basis for Tolstoy’s later novel War and Peace. Following the war, Tolstoy left the army; he eventually became a staunch pacifist. Between 1863 and 1877 Tolstoy composed his two most famous works, War and Peace and Anna Karenina. His honest depictions of Russian society and politics in these works have led to his being considered a member of the so-called “realist” school. During the 1870s, Tolstoy fell into a deep spiritual crisis driven by a sense of purposelessness and a fear of death, and he turned toward intense religiosity. Tolstoy became highly critical of the Russian Orthodox church, and in 1901 he was excommunicated. Tolstoy turned his attention to writing religiously-focused literature, including essays on Christ’s teachings, a synthesis of the four gospels, and didactic (or instructive) moral tales. During this period, he wrote The Death of Ivan Ilyich, about a man confronting his mortality. Throughout his later writings Tolstoy continued to attack the church and social (or state) institutions, particularly the justice system (as in “God Sees the Truth But Waits”). Additionally, he renounced much of his past work, including War and Peace, as he determined to write not for the educated elite, but for the common people and for children. Tolstoy died of pneumonia in 1910.
Get the entire God Sees the Truth But Waits LitChart as a printable PDF.
"My students can't get enough of your charts and their results have gone through the roof." -Graham S.
Download 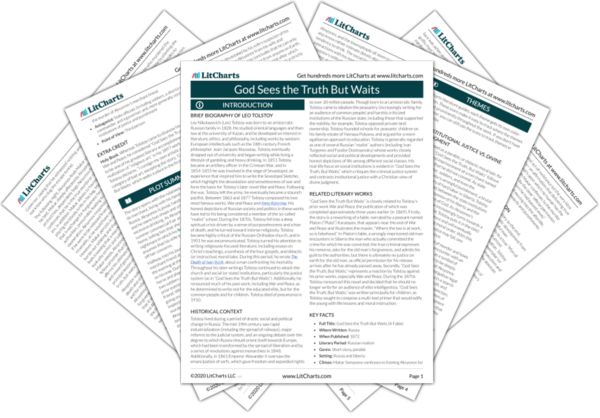 Historical Context of God Sees the Truth But Waits

Tolstoy lived during a period of drastic social and political change in Russia. The mid-19th century saw rapid industrialization (including the spread of railways), major reforms to the judicial system, and an ongoing debate over the degree to which Russia should orient itself towards Europe, which had been transformed by the spread of liberalism and by a series of revolutions against monarchies in 1848. Additionally, in 1861 Emperor Alexander II oversaw the emancipation of serfs, which gave freedom and expanded rights to over 20 million people. Though born to an aristocratic family, Tolstoy came to idealize the peasantry (increasingly writing for an audience of common people) and harshly criticized institutions of the Russian state, including those that supported the nobility; for example, Tolstoy opposed private land ownership. Tolstoy founded schools for peasants’ children on his family estate of Yasnaya Polyana, and argued for a more egalitarian approach to education. Tolstoy is generally regarded as one of several Russian “realist” authors (including Ivan Turgenev and Fyodor Dostoyevsky) whose works closely reflected social and political developments and provided honest depictions of life among different social classes. His real-life focus on social institutions is evident in “God Sees the Truth, But Waits,” which critiques the criminal justice system and contrasts institutional justice with a Christian view of divine judgment.

Other Books Related to God Sees the Truth But Waits

“God Sees the Truth But Waits” is closely related to Tolstoy’s prior work War and Peace, the publication of which was completed approximately three years earlier (in 1869). Firstly, the story is a reworking of a fable, narrated by a peasant named Platon (“Plato”) Karatayev, that appears near the end of War and Peace and illustrates the maxim, “Where the law is at work, so is falsehood.” In Platon’s fable, a wrongly-imprisoned old man encounters in Siberia the man who actually committed the crime for which he was convicted; the true criminal expresses his remorse, asks for the old man’s forgiveness, and admits his guilt to the authorities, but there is ultimately no justice on earth for the old man, as official permission for his release arrives after he has already passed away. Secondly, “God Sees the Truth, But Waits,” represents a reaction by Tolstoy against his prior works, especially War and Peace. During the 1870s Tolstoy renounced this novel and decided that he should no longer write for an audience of elite intelligentsia; “God Sees the Truth, But Waits,” was written principally for children, as Tolstoy sought to compose a multi-text primer that would edify the young with life lessons and moral instruction.
Key Facts about God Sees the Truth But Waits

Extra Credit for God Sees the Truth But Waits

Holy Book. Whereas Tolstoy came to disavow his famous novel War and Peace, he considered “God Sees the Truth, But Waits,” to be one of his greatest literary accomplishments and an ideal realization of “religious art.” In his 1897 work What is Art? Tolstoy declares, “I consign my own artistic production to the category of bad art, excepting the story, ‘God Sees the Truth, But Waits,’ which seeks a place in the first class (religious art).” 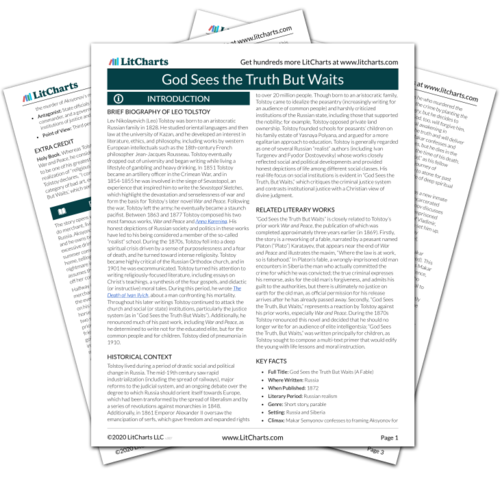 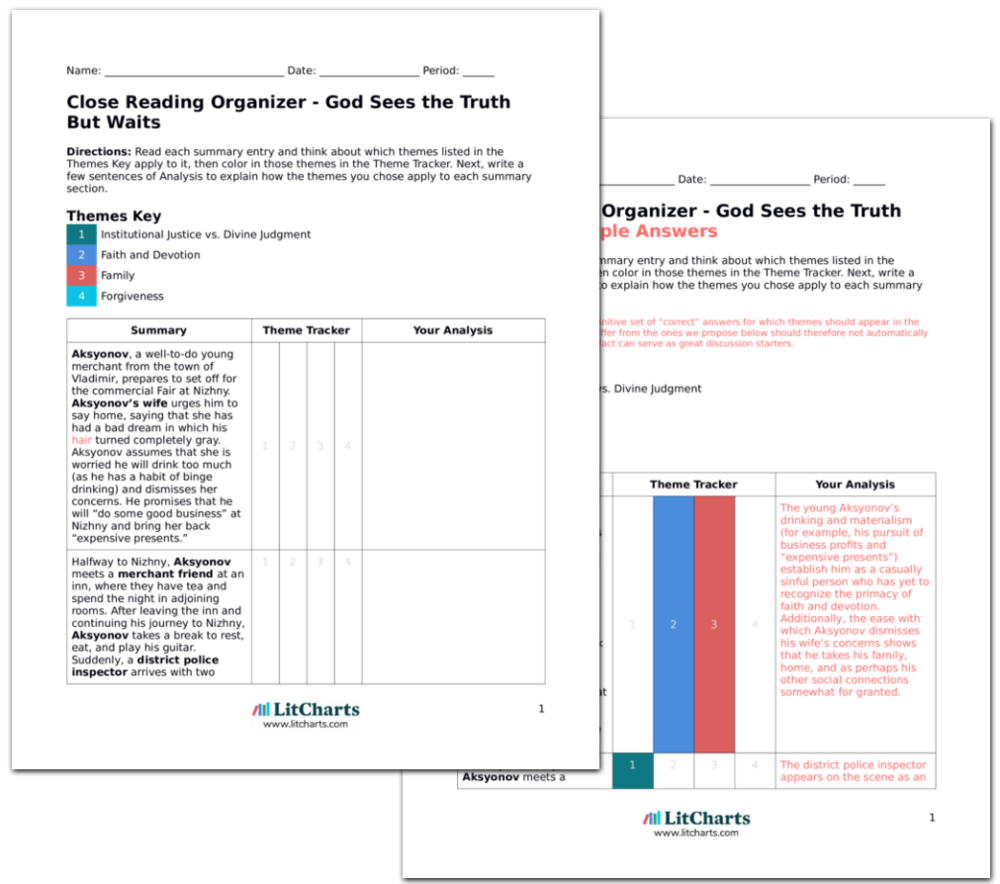