Welcome to the LitCharts study guide on James Baldwin's Going to Meet the Man. Created by the original team behind SparkNotes, LitCharts are the world's best literature guides.

Going to Meet the Man: Introduction

A concise biography of James Baldwin plus historical and literary context for Going to Meet the Man.

A quick-reference summary: Going to Meet the Man on a single page.

In-depth summary and analysis of every of Going to Meet the Man. Visual theme-tracking, too.

Going to Meet the Man: Themes

Explanations, analysis, and visualizations of Going to Meet the Man's themes.

Going to Meet the Man: Quotes

Going to Meet the Man's important quotes, sortable by theme, character, or .

Going to Meet the Man: Characters

Description, analysis, and timelines for Going to Meet the Man's characters.

Going to Meet the Man: Symbols

Explanations of Going to Meet the Man's symbols, and tracking of where they appear.

An interactive data visualization of Going to Meet the Man's plot and themes.

Baldwin was born in 1924 in the New York neighborhood of Harlem. He was raised by his mother and step-father, a Baptist minister who abused and ridiculed him. This abuse, as well as the persistent racism Baldwin experienced while growing up, had a deep influence on his writing. At 19, Baldwin began devoting himself seriously to writing, publishing essays and short stories. In 1948, after being denied service in a New York City restaurant because he was Black, Baldwin moved to France, where he wrote some of his most famous works, including Go Tell It on the Mountain and Notes of a Native Son. Though Baldwin returned to the U.S. in the 1960s to participate in and document the Civil Rights Movement, he moved back to France later in his life, citing its importance in giving him perspective on his experience of racism in America. Though Baldwin is best known as a novelist and essayist, he was also a playwright, a poet, a critic, and a writer of short stories (such as “Going to Meet the Man”). Though Baldwin never publicly came out as queer, he was romantically linked to both women and men throughout his life and became known for his frank treatment of taboo subjects like homosexuality and bisexuality. Widely considered to be one of the greatest American writers of the 20th century, Baldwin’s influence lives on in writers like Toni Morrison and Joan Didion. He died in 1987 of stomach cancer at his home in the south of France.
Get the entire Going to Meet the Man LitChart as a printable PDF.
"My students can't get enough of your charts and their results have gone through the roof." -Graham S.
Download 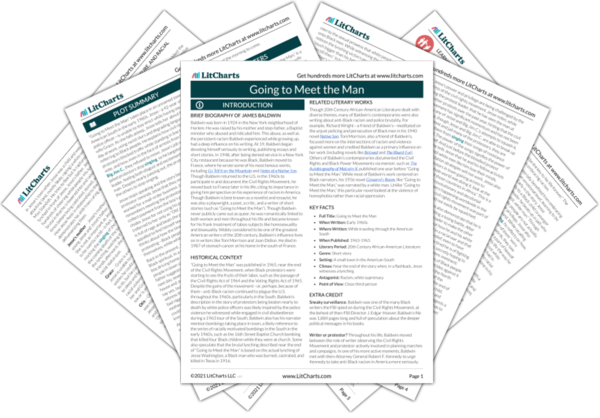 Historical Context of Going to Meet the Man

“Going to Meet the Man” was published in 1965, near the end of the Civil Rights Movement, when Black protestors were starting to see the fruits of their labor, such as the passage of the Civil Rights Act of 1964 and the Voting Rights Act of 1965. Despite the gains of the movement—or, perhaps, because of them—anti-Black racism continued to plague the U.S. throughout the 1960s, particularly in the South. Baldwin’s description in the story of protestors being beaten nearly to death by white police officers was likely inspired by the police violence he witnessed while engaged in civil disobedience during a 1963 tour of the South. Baldwin also has his narrator mention bombings taking place in town, a likely reference to the series of racially motivated bombings in the South in the early 1960s, such as the 16th Street Baptist Church bombing that killed four Black children while they were at church. Some also speculate that the brutal lynching described near the end of “Going to Meet the Man” is based on the actual lynching of Jesse Washington, a Black man who was burned, castrated, and killed in Texas in 1916.

Other Books Related to Going to Meet the Man

Though 20th Century African-American Literature dealt with diverse themes, many of Baldwin’s contemporaries were also writing about anti-Black racism and police brutality. For example, Richard Wright—a friend of Baldwin’s—meditated on the unjust policing and persecution of Black men in his 1940 novel Native Son. Toni Morrison, also a friend of Baldwin’s, focused more on the intersections of racism and violence against women and credited Baldwin as a primary influence on her work (including novels like Beloved and The Bluest Eye). Others of Baldwin’s contemporaries documented the Civil Rights and Black Power Movements via memoir, such as The Autobiography of Malcolm X, published one year before “Going to Meet the Man.” While most of Baldwin’s work centered on Black narrators, his 1956 novel Giovanni’s Room, like “Going to Meet the Man,” was narrated by a white man. Unlike “Going to Meet the Man,” this particular novel looked at the violence of homophobia rather than racial oppression.
Key Facts about Going to Meet the Man

Extra Credit for Going to Meet the Man

Sneaky surveillance. Baldwin was one of the many Black writers the FBI spied on during the Civil Rights Movement, at the behest of then-FBI Director J. Edgar Hoover. Baldwin’s file was 1,884 pages long and full of speculation about the deeper political messages in his books.

Writer or protestor? Throughout his life, Baldwin moved between the role of writer observing the Civil Rights Movement and protestor actively involved in planning marches and campaigns. In one of his more active moments, Baldwin met with then-Attorney General Robert F. Kennedy to urge Kennedy to take anti-Black racism in America more seriously. 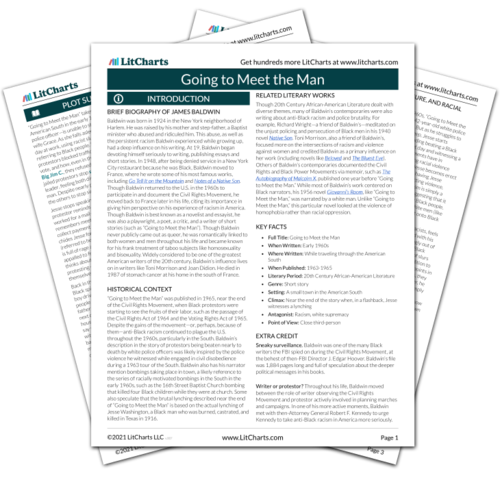 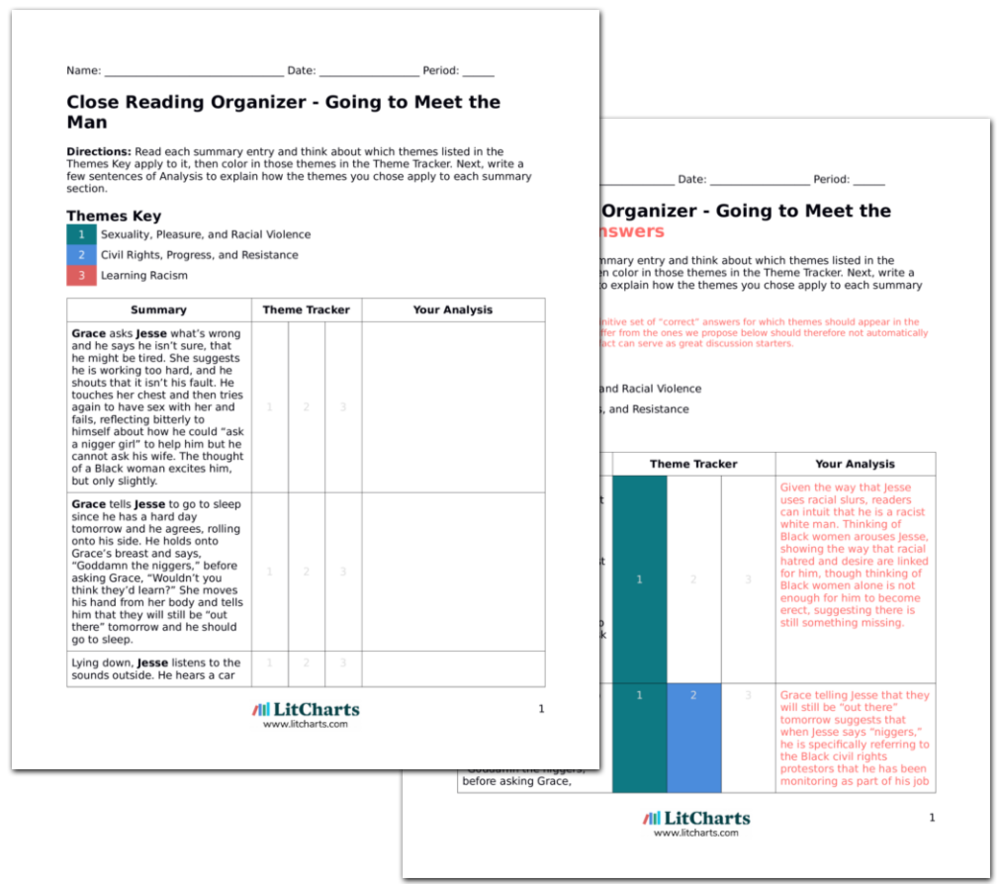